CrossWorlds is an extremely popular MMO of the distant future. Players put on a headset and are transported to another planet entirely, a world where they become Seekers; warriors who walk the Track of the Ancients to gain power and knowledge. Everything on this planet, aside from structures like houses and the earth itself, is made of a substance called instant matter. This innovation, along with the headset’s CrossCode, allows players to create and control another body like it was their own, remaining safe in the comfort of their homes while still being able to feel the temperature and atmosphere of the Track. CrossWorlds is where the real-life game CrossCode takes place. You are Lea, an amnesiac who was logged into the game by a man named Sergey to hopefully regain her memories through playing. As you play, you’ll make new friends, join a guild, and learn who you are and why you can’t seem to leave the game.

CrossCode uses its game-within-a-game setting to its fullest potential. The story is immediately interesting and continues this momentum throughout the game. I really don’t want to spoil anything more than the basic premise, just know that it’s very, very good, and actually has a lot to say about many current day topics as well as more sci-fi topics. The characters are equally excellent, especially Lea. Despite a speech module malfunction that leaves her with a sparse vocabulary, her bold personality comes across through her expressions and friendly attitude. 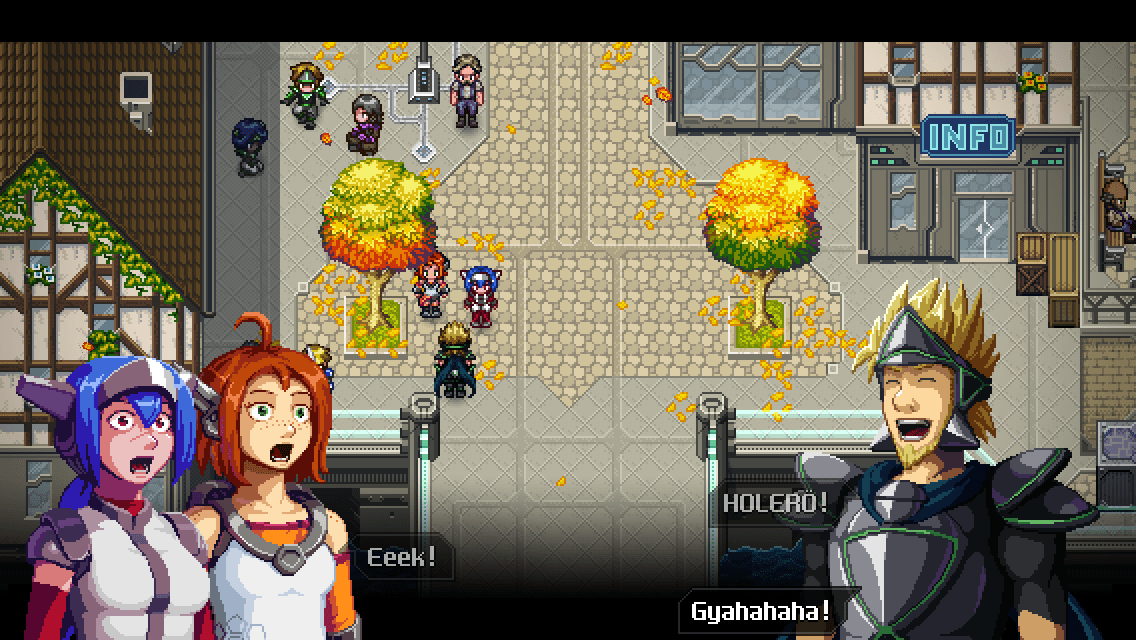 In CrossWorlds, Lea plays as a Spheromancer, a class which uses chakrams and specializes in darting all over the battlefield delivering swift, powerful strikes. All of the game’s classes also have access to Virtual Ricochet Projectiles, little balls that players throw around that bounce off of walls. As previously mentioned, you’ll go on the Track of the Ancients; a series of varied areas and dungeons which reward players with different elemental powers and knowledge about the ancient civilization that once inhabited the planet. If enough players finish the Track, more of it will unlock (CrossWorlds is still in early access, after all).

As you play, you’ll explore a variety of locations like autumnal forests, chilly mountain trails, and mushroom forests. (Look, there’s a lot of trees.) There are a ton of creative enemies scattered throughout the world too, like parrots with guns and rabbit-frog-things. On your way to each major location, you’ll encounter a ton of these creatures to battle with even more ways to fight them. Lea can perform a combo with her chakrams, ending in a big spin you can cancel out of to skip its cooldown animation by dodging, shoot the aforementioned balls, or perform a variety of special moves. There are four types of specials: melee, ranged, guard, and dodge. Depending on which of the five elements you’ve got equipped (Neutral, Fire, Ice, Wave, and Shock), these specials will also change. Furthermore, each type of special can be charged up to three times and can be selected from one of two branches in the Circuits menu, a series of skill trees to modify stats for each element. For now, just know that you have a huge amount of options in combat. 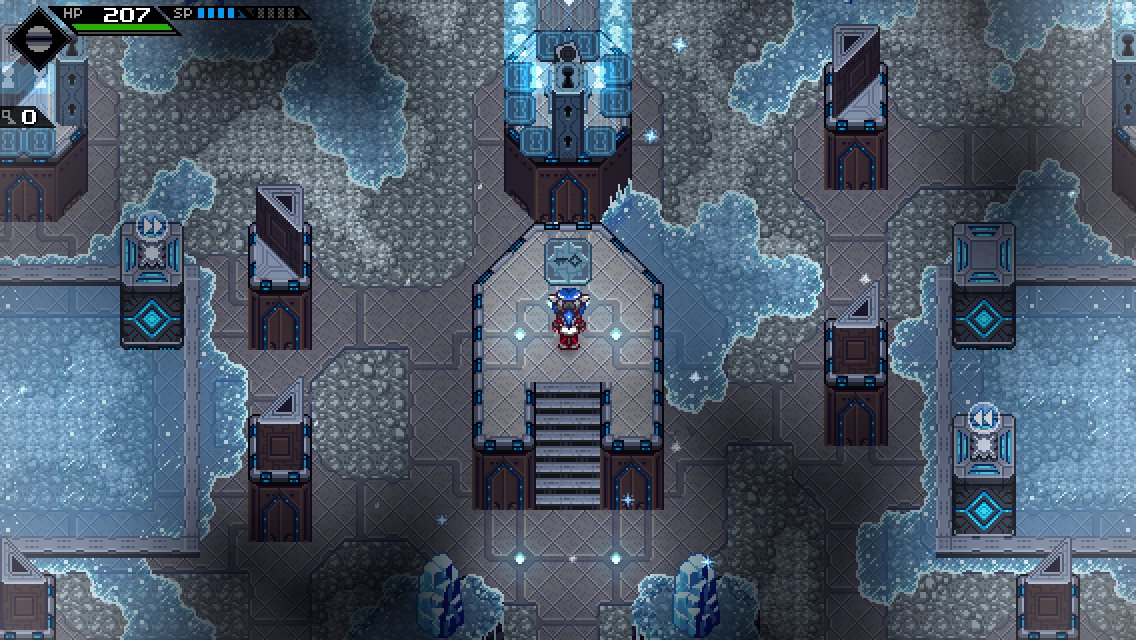 You’ll need to master this moveset not just for combat, but for puzzle solving as well. The main idea behind most of CrossCode’s puzzles, both in the overworld and in the Zelda-like dungeons, is using your bouncing projectiles in creative ways to flip switches, remove obstacles, and move blocks. The game fully explores this concept with some absolutely devious contraptions that match the difficulty of the various bosses you’ll fight at the end of each dungeon. Did I mention that CrossCode is a difficult game? Because it can get very hard, especially later on. Most enemies clearly telegraph each attack, but dodging at the right moments while keeping up the pressure can feel like a delicate dance where your HP bar might as well be a “Mistakes Meter.” For those who just want to explore the world and experience the gripping story, there are several accessibility options available to adjust things like damage received, the frequency of enemy attacks, and the timing of switches and projectiles in puzzles. I tried to avoid using these, but to get this review done in a timely fashion, I had to slow down puzzles for the final ricochet puzzle as well as reduce damage on the final boss. Aside from those instances, I really enjoyed the challenges the game presents. It’s difficult, but fair. As long as I had level-appropriate gear equipped, I never felt totally outmatched by enemies or was stumped on a puzzle for too long. And you’re incentivized to get through these dungeons as fast as you can by your in-game friends and party members, who are all racing to see who can complete the instanced areas the fastest. It’s a good way to remind you that you’re supposed to be playing an MMO, even if you have to do some things alone.

While the main story will keep you occupied for around 30 hours, the sheer number of side quests and hidden areas to explore can easily take another 50. The game handles these extras and the design of its world similarly to the Xenoblade series, with large swaths of land to explore between towns and tons of secrets to find. Once the game hits its stride after the first dungeon, it’s a joy to backtrack with your new abilities to see how you can parkour over to that treasure chest you spotted earlier. Unfortunately, it does take quite a bit of time to get to that point in each area. Usually, there is a large power gap between your three-person party and the enemies of the next area, which is solved by purchasing or trading for new gear. However, you need to trek through said area to reach the next town and stand a chance against these new foes. New gear is always very expensive, and you’ll probably be able to afford only one or two pieces before you need to take on these tough enemies for more cash. It’s a bit of a circular problem: you need new gear to fight new enemies, but you need more credits to buy new gear which you can only get by fighting new enemies. Occasionally, you’ll find traders near the start of an area with better equipment, but I found this system especially difficult to interact with on Switch. The idea is that you increase the rarity of items dropped by enemies by fighting multiple battles in a row without breaks or letting the timer run out, increasing your rank from D to S. You then take those items back to town, and trade them with NPCs for even more items, and so on until you can trade for better weapons and armor than you can find in shops. There’s even a list of available trades you can find in the menu to help you keep track of what you need, but trying to open this menu would consistently crash the game. 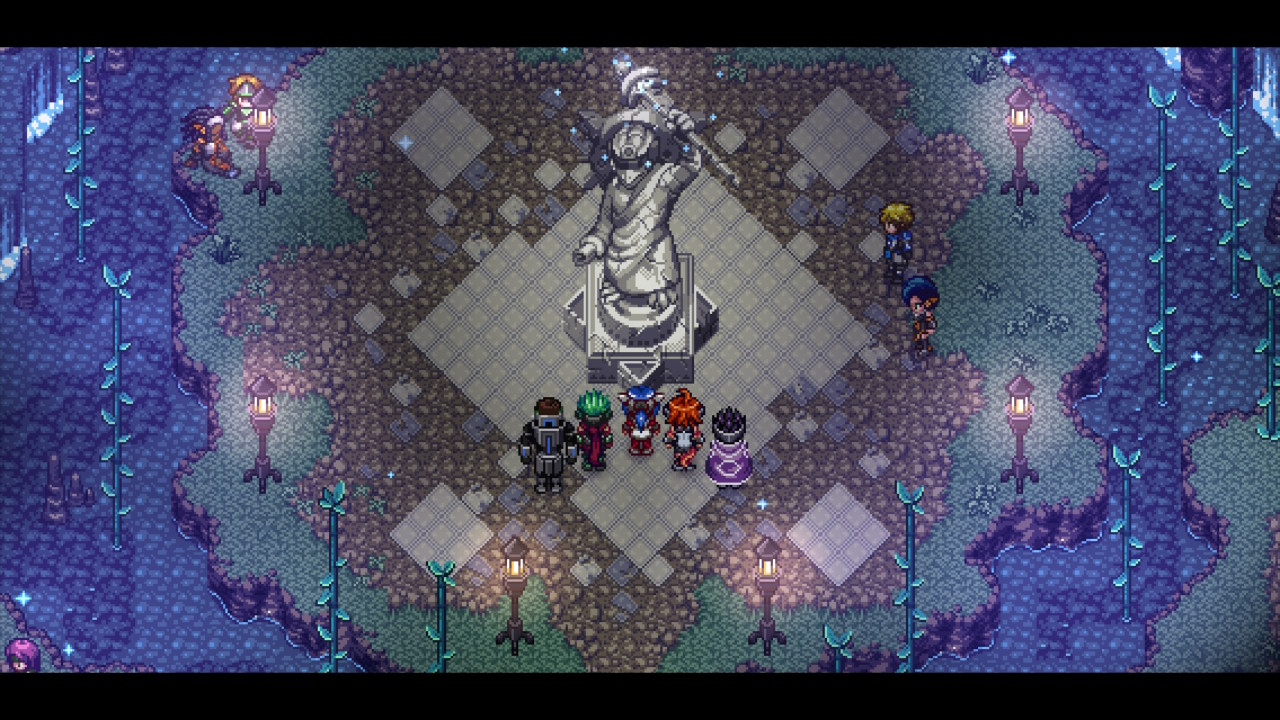 Performance on Switch is also lacking, outside of a few crashes in menus and cutscenes which don’t hinder the experience too much since the game autosaves constantly. To start with, the game will freeze for a second or two when loading ambient dialogue or even selecting an option in the character menu. On top of that, the frame rate in towns and some effect heavy encounters is horrendous. I actually found the first few hours difficult to get through since most of it is spent in the game’s first town as these constant drops from 60 fps made me nauseous. It does get better as you go along, with a few trouble spots along the way, but hopefully they can fix this in an upcoming patch. There are several content updates planned as well, with New Game + and an epilogue on the way with even more content coming if players can solve a puzzle hidden in each console release’s unique quest. As a final note, there is a physical edition planned to release sometime this year with multiple editions containing some neat goodies like an adorable keychain, steelbook case, stickers, the bumpin’ soundtrack, a poster, and much more. While I personally won’t be able to afford this, I am definitely looking forward to revisiting the game around the time of its launch or whenever those updates come to Switch. I play a lot of games for this job, and if that doesn’t speak to the quality of this indie title I don’t know what does.

CrossCode is an amazing puzzle action RPG with a touching story and a beautifully detailed world. Combat has tons of options and puzzles require a lot of critical thinking and creative solutions to solve. It draws inspiration from classic SNES RPGs and the Zelda series, but stands proudly among them as a modern classic.

David is the kind of person to wear his heart on his sleeve. He can find positives in anything, like this is a person who loved Star Fox Zero to death. You’ll see him playing all kinds of games: AAAs, Indies, game jam games, games of all genres, and writing about them! Here. On this website. When not writing or playing games, you can find David making music, games, or enjoying a good book. David’s favorite games include NieR: Automata, Mother 3, and Gravity Rush.
Related Articles: CrossCode, Indies
Share
Tweet
Share
Submit