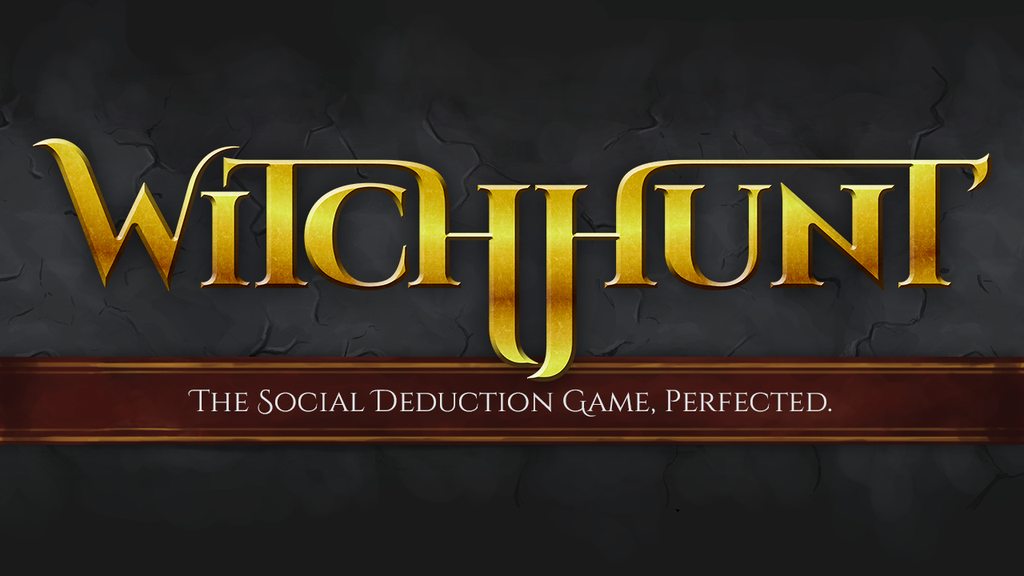 In a time that historians cement as the Dark Age, we find ourselves threatened by the agents of the dark itself. Witches have come to our village, and we must uncover and execute them before they destroy us. As the nights and deaths wear on, we find the conflict worsening. Demons harry our clergy and Angels do their best to defend us, but there are fewer every day, and we don’t know who to trust.

Witch Hunt is a social deduction game for 7-20 (or more) players, and though it says it is best with 9-18 people, that is still an enormous gap. At a purported 4 minutes per player turn (which is actually fairly accurate), that makes for wild variation in game size. In some games, that might signal a lack of clarity in design, but Witch Hunt incorporated that aspect directly: the point is to foster a community atmosphere that lends itself to insular and mounting paranoia.

Witch Hunt is, at its core, a mixture of the Resistance and Werewolf, attempting to reconcile issues in both titles. In some ways it succeeds, but in so doing it compounds its own issues. Each player will have both a loyalty card, which tells them whether they are a villager or witch, and a role which will grant them a special ability to break a rule of the game. Every round results in an execution, and the ultimate goal is for one team to eliminate the others. The game even starts with an execution, which ramps up the tension and paranoia immediately. After all, witch hunts have only ever ended by devastating communities pointlessly, if only for the sake of antagonism. During the night, witches also get to kill one person, including one of their own if they so choose. Doing so confuses deliberations and gives the team a Demon player to confound the villagers.

Witch Hunt is a collection of solutions in search of problems that have never been that bad to begin with. Yes, some social deduction games have player elimination. But those games are short enough that it is a minor annoyance. Yes, other social deduction games may be too short and simple. However the complexity in Witch Hunt adds new layers that will force many people from enjoying it, especially a more casual audience that might be attracted to it. A game with up to 20 people needs to be fast paced and intuitive. Witch Hunt is in many ways, but in many others it slows itself down with rules that are so complex that one player’s entire role in the game is keeping track of them.

One person out of every game will not be able to play along with the others. That unfortunate soul has the position of Moderator, whose only position in the game is to keep things running and on time. Given the number of roles in play and phases of the game to moderate, this is a serious job. There is a free Moderator App, which goes a long way towards cutting down calculations and keeping everything in order. Even so, one person is relegated to keeping the game moving along and doing nothing else, in what could potentially be an hour and a half experience.

The Moderator’s first job is to enforce a strict time limit to keep the game from getting bogged down in arguments. This simple feature keeps the game running smoothly and makes sure everyone is engaged. During the Day phase, the living players will debate who they want to hang during the Night phase. However, the dead players also have a part in this tragedy. Once you execute someone, you do not become aware of their loyalty. Dead villagers become Angels, who can protect one person per night from execution; alternatively, dead witches become Demons, who meddle with the Priest’s unique ability to check other players’ loyalties.

These are the potential steps for the first phase alone, before the game proper even begins

Keeping these players engaged throughout the course of the game is a noble idea, but one that degrades as the game wears on. Angels and Demons vote as one, and they may not let the living players into their deliberations. As there are more of them, their deliberations become more complicated, but these deliberations only happen at the night phase, because they will want to wait until they know who the villagers have hanged before they decide who the witches most want to kill. They have to separate themselves from the players to deliberate, for a period of time set by the Moderator, with no real assistance from the rules on that point. Once they are done, the Demons do the same.

Except for Clergy characters, who are never witches, you need to be wary of everyone. Anyone could be on any side, and their roles complicate matters further. These abilities are all-powerful and game-changing, but must be used intelligently. The Fortune Teller can learn what will happen in the event of one person’s death, but only once per game. The Fanatic gains an extra life if the Priest checks his loyalty. The Priest, as you might imagine, can check one player’s loyalty per night. The roles themselves are incredibly simple, so that even new players will know exactly what their abilities are without having to check a rulebook. These roles are also separated into simple and advanced, which make it easier to decide how much an individual wants to be tracking their own ability.

What isn’t so easy is keeping track of everyone at the table. It’s a fascinating aspect of the game that the same power can be applied very differently depending on whose team that player is on.That said, there number of roles at the table becomes unwieldy, especially in a game that is designed for high player counts. Keeping track is made easier through jumbo player cards which are open on the table and let everyone know what the roles and abilities in the game are. Even so, you have to track these abilities as well as player loyalties, and you won’t necessarily know when a given role has used its ability.

On the left is a cheat sheet of phases, incorporating the roles. The Moderator needs to know all of this as well as additional information about the roles and how each phase has to function

In theory, the actual play of the game is simple. You start with a random role and alliance (the numbers of each team being determined by player count) and go through the Day and Night phases until one faction is eliminated or the Moderator determines the end to be inevitable…based purely on their own intuition. The game begins with a prologue during which the witches see one another and their abilities. During the day, villagers vote on who to execute. If there is no consensus, the Judge (who is a required character in all games) decides who to kill. There are great possibilities here. Villager or not, it might be in that person’s interest to force a standstill, though the Judge’s reasons for doing so may be obvious.

During the night phase, the witches choose who to kill. They may not speak, but they can use whatever hand signals or gestures they choose to communicate. These are complicated and time consuming decisions that they can only make by hand signal. In these games you do your best to keep your eyes closed, but when some players at the table are violently motioning to one another you will have a difficult time not determining who is who.

While all of this is going on, the Moderator has to track the order in which roles can use their abilities. Each individual element of Witch Hunt is simple, and when you get into the throes of debating loyalties you are having a fantastic time. The roles make sure that you are judging based on information instead of wild speculation, but the air of paranoia stays palpable throughout.

Unfortunately, the game (as well as the rulebook that explains it) feels cluttered with all of the special rules and circumstances, only some of which come from the roles. Regardless, the Moderator has to keep all of them in mind and balance them against one another while also keeping a strict time limit.

Witch Hunt’s art and card design are fantastic. Not only are the abilities clearly spelled out, but in stating whether they are offensive, defensive, or otherwise, it quickly spells out how to consider your ability. Each character has tons of personality, and this diverse cast is dressed sensibly for whatever their chosen profession would be. Their outfits are reasonable, but also styled iconically. There is almost no chance of confusing these characters with one another.

Witch Hunt is ambitious, but its ambition does not always turn out well. I try to stray away from comparisons to other games, but this one’s connections to Werewolf is so blatant that it isn’t possible. Its goal is tries to fix issues in other social deduction games so that it can build towards something greater. In many ways it does, but in that complexity it makes itself so difficult to play that it undercuts its own successes. I want to love this game, but I can’t.

There is great potential here, but it takes so much effort to pull out that it really only hits its stride once you have played with those already very familiar with the game. There is some real genius at work here when you can find it, but the search means that more casual players will be lost, and those are the kind that you want to target most with a game like this. There is also far too much being thrown on the Moderator, who can’t play the game but instead has to put serious work into making sure it runs smoothly. If they can’t do that, every other player (potentially all 22 of them) will be having a bad time.

I commend Witch Hunt for its ambition, its style, and its clever approach to social deduction. At the same time, playing the game is fraught with such complexity that you will have difficulty uncovering those advantages. I want to love this game, but I also don’t want to work so hard to do it.

John Farrell is a legal aid attorney specializing in domestic violence, living in West Chester Pennsylvania. You can listen to him travel the weird west as Carrie A. Nation in the Joker's Wild podcast at: https://jokerswildpodcast.weebly.com/
Related Articles: Tabletop, Witch Hunt
Share
Tweet
Share
Submit