Trials of Mana originally released to a Japanese audience in 1995 as a sequel to the popular, multiplayer RPG Secret of Mana. Meanwhile, an american team at SquareSoft released another sequel to the same title, Secret of Evermore. Both games took inspiration from their predecessor, but went in very different directions. Evermore removed the multiplayer and ring menu aspects, and focused more on weapon variety and an in depth magic system through alchemy. Trials also took a step back on the multiplayer, allowing only two players this time, but allowed players to choose three of six of the game’s heroes for their party, changing certain story elements depending on who you choose as your protagonist and their two companions. While Trials of Mana’s Super Nintendo debut wasn’t released outside of japan until the Collection of Mana (and Evermore still hasn’t been released in Japan), the game has now been completely remade in 3D, adding even more content after the main story. Trials of Mana is indeed a worthy successor to Secret of Mana, but players may find that it has more in common than Secret of Evermore than you might think.

Trials of Mana’s six potential protagonists are quite an eclectic cast of characters. There’s the typical swordsman eager to prove himself Duran, the naive yet goodhearted Kevin, and the responsible elder sister princess Riez. Or maybe you want a more atypical hero, like the rougeish thief Hawkeye, the childish healer Charlotte, and the selfish mage Angela. Your choice in protagonist has the most effect on the story, with three overall paths it can take. This means that the characters are divided into pairs, if the two are together you’ll see much more dialogue between the two about the plot. Not knowing this, for my initial playthrough I chose Angela as my protagonist accompanied by Kevin and Riez, all of whom have different scenarios. I don’t regret this decision, as the three’s combat styles compliment each other very well, but I was very disappointed in how little they interacted with each other until the endgame quests. Regardless, whoever you choose as your hero will be chosen by Faerie to retrieve the Mana Sword, save the Goddess of Mana, and prevent the world’s destruction by finding the 8 Mana stones and defeating their respective Benevodons. 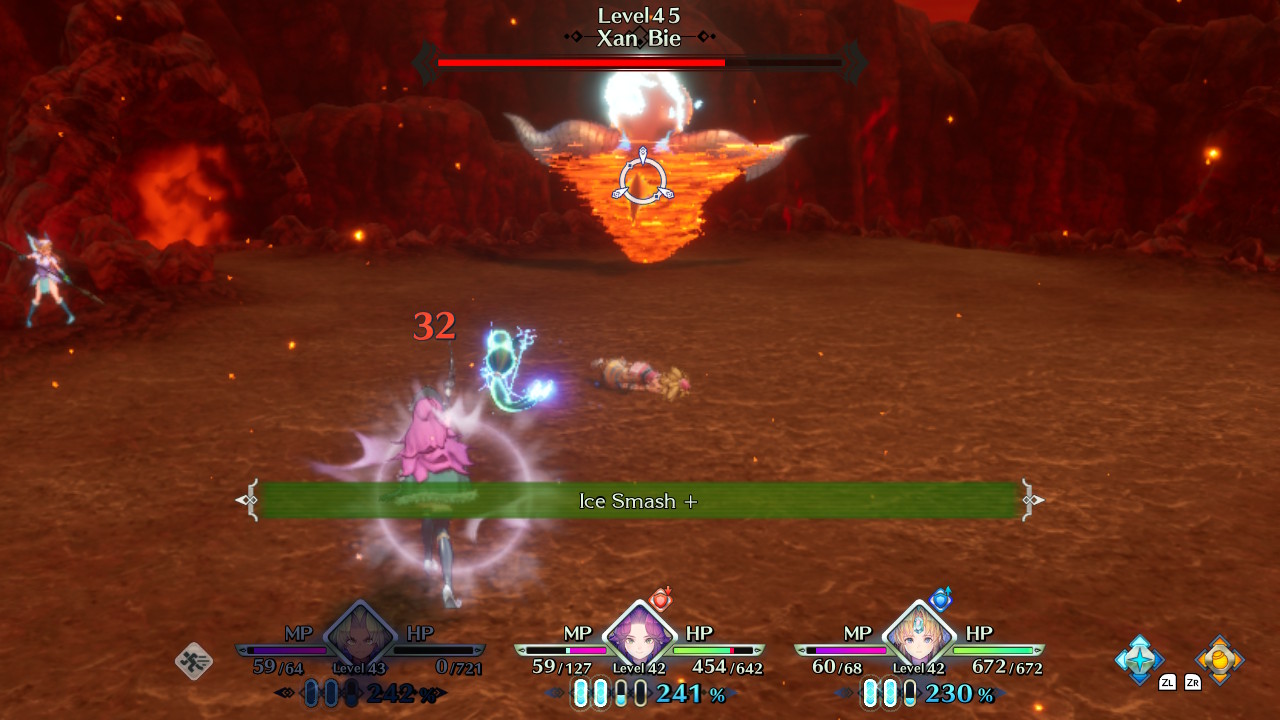 As you progress through Trials’ trials, like any RPG, you’ll gain experience and level up. Upon gaining a level, you’ll receive Training Points to allocate into different proficiencies like Strength, Intelligence, or Luck. While putting points into these disciplines will grant bonuses in their respective stats, you can also acquire new spells or equippable abilities such as regenerating MP over time in battle or increasing a character’s defense at low HP. On top of this, Trials of Mana features a class system. Upon reaching levels 18 and 36, you’ll gain access to class 2 and class 3 respectively. You can change classes at any Mana stone, and when you do you’ll be given the option of a Light or Dark class, each with different strengths and weaknesses along with a new outfit and a new selection of abilities and skills in the training menu. Both of these systems fit into each other almost perfectly, giving the game even more replayability even outside of trying new character combinations. I say almost perfectly, because trying to even get a character to class 3 can be a big chore. In addition to needing the level requirement met, you’ll also need a specific item for either the light OR dark versions you can only receive through two separate random drops. First, you’ll need “???” seeds, which are exceedingly rare, then you’ll need to grow them using the item planter found in every inn and at some save points. The class item you get from growing the seed can be any item your particular party can use to ascend to class 3, but that’s still a one in six chance of getting the item you need. If, like me, you have particularly bad luck, most of your party won’t reach class 3 until around level 68 and you’re standing right in front of the final boss. Not getting a new class also means you can’t uncap your proficiencies, which leaves party members weak and tons of training points left unused.

The world of Trials is vibrant and colorful. It retains a childish wonder, which fits the english dub’s almost 4Kids like quality, while also leaving room for some of the game’s darker locals like a ghost ship or a dying forest. On switch, the game looks about on par with other versions, minus a few graphical enhancements like anti-aliasing. It’s quite another story for the framerate, however, the game runs at a max of 30 fps while PS4 and PC can reach up to at least 60. This wouldn’t be a problem if the game could hit a consistent 30, but it almost never can, especially in boss encounters or battles with more than two enemies. On top of that, the game on Switch isn’t actually capped at 30 frames per second, menus actually can reach something close to 60 which makes returning to the sluggishness of gameplay all the more jarring. 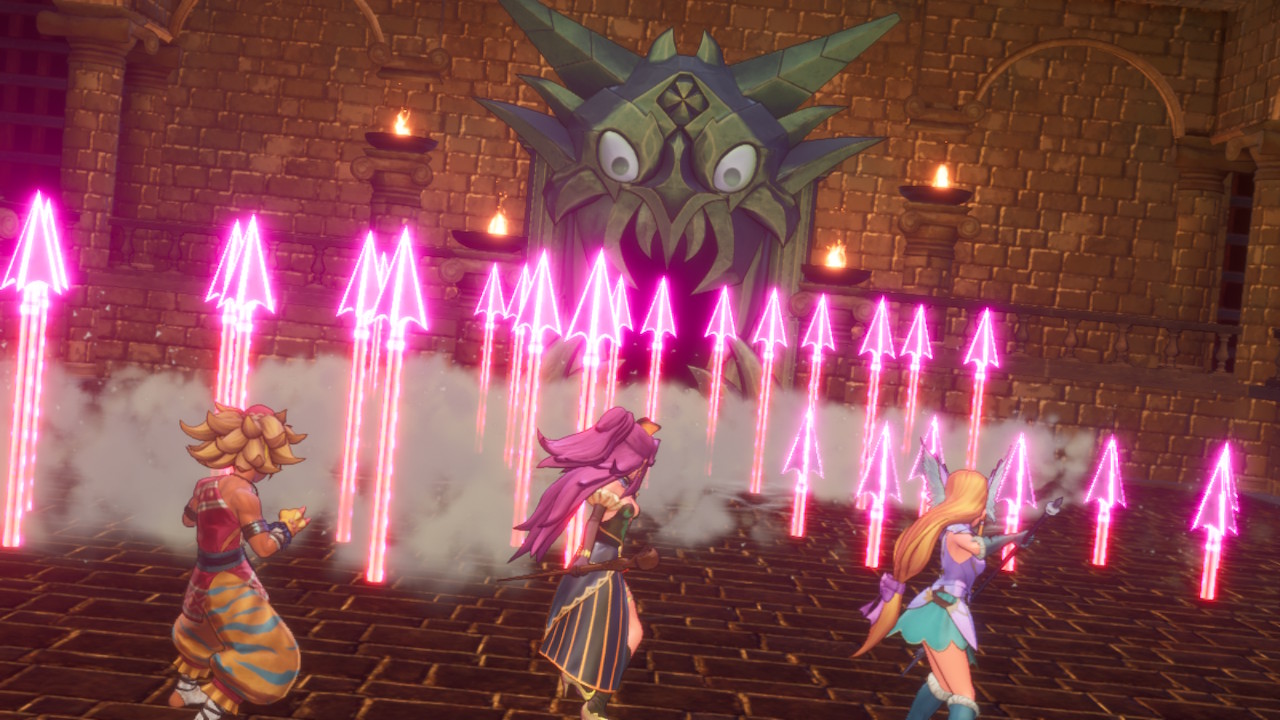 There are quite a few additions and changes to this remake of the 1995 game, most obviously the transition to 3D, full voice acting, an excellent new game plus that carries over just about everything from a previous playthrough, a 4th class to acquire, and new music that evokes the Super Nintendo’s sounds with much better quality, but not all the changes are for the better. The most glaring is the removal of any sort of multiplayer, which the simplicity of combat just begs for. Like many other action oriented games, you have a light combo which can transition into a heavy finisher as well as being able to use class skills by filling up a bar at the bottom of the screen to a certain percentage or even casting spells and using items with the iconic ring menu. It’s rudimentary, but fun for the most part. The original was designed to be played with a friend, and here with no coop of any kind the combat constantly feels like it’s missing something, and I’m not just saying that because my AI controlled party keeps walking into bosses and dying. The story and world are just screaming to be experienced with one or two friends at your side, filling in the gaps that the lack of character interactions leaves or pointing out secret areas and solving puzzles together. Trials of Mana and Secret of Evermore may be a step up in terms of overall quality, but they both lack one big thing the original had: friends.

Trials of Mana is a wonderful reimagining of the 1995 classic. It’s an almost endlessly replayable RPG thanks to the roster of characters, class system, and incredible new game plus. However, it’s held back from greatness by a terrible english dub, poor performance on Switch, and the lack of multiplayer especially leaves a large hole in an otherwise enjoyable experience.

David is the kind of person to wear his heart on his sleeve. He can find positives in anything, like this is a person who loved Star Fox Zero to death. You’ll see him playing all kinds of games: AAAs, Indies, game jam games, games of all genres, and writing about them! Here. On this website. When not writing or playing games, you can find David making music, games, or enjoying a good book. David’s favorite games include NieR: Automata, Mother 3, and Gravity Rush.
Related Articles: Trials of Mana
Share
Tweet
Share
Submit