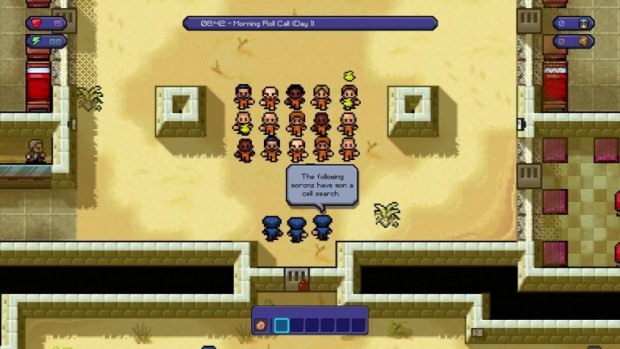 Editor’s Note: We already reviewed this game, so the review below may seem familiar. If you’re looking for what’s different on the PS4, scroll down to “New on PS4.”

I’ve never been to prison before, but I like to think that if I ever do end up in the big house I’d at least be able to look forward to the prospect of planning my escape. With MouldyToof Studios’ The Escapists, I finally had my opportunity to live out this fantasy without the whole “Life sentence without parole” thing. The Escapists presents an extremely challenging, but rewarding experience, that is a lot of fun in spite of its sometimes frustrating elements.

The premise of The Escapists couldn’t be more simple: You are repeatedly incarcerated in increasingly more secure prisons with the sole goal of finding a way to escape. Many options are available to the player, from climbing through the ventilation system and then tunneling your way out, to disguising yourself as a guard and walking out the front door. As the player progresses to more difficult prisons, such as the Gulag, the player’s cunning and planning ability are put to the test.

In one scenario, I used my prison job of washing laundry to my advantage and stole a guard uniform to make my escape during the afternoon free period, but once I had gotten past the guards and attempted to make a break for the tunnel I had dug outside, I discovered that my tunnel had been found and filled in by the guards. Just then a riot broke out, and inmates started knocking out guards left and right. I ran from room to room looting guards’ unconscious bodies and found a bunch of keys, which allowed me to leave through the back door in the midst of the chaos. Moments like these take careful planning and a lot of skill, sometimes both, but the payoff of getting away scot-free is worth every second of stress.

At the heart of The Escapists is an open-ended puzzler, where there is more than one solution to the puzzle, but none of them are easy. Maybe you want to become good friends with your fellow inmates and use their support to aid your escape. Or perhaps you’ll bribe guards into cutting you slack while you plan your escape. The strategy is yours to develop, and repeated failure is inevitable in your attempts to regain your freedom.

Planning your departure from the hoosegow can however be a very frustrating experience, particularly when you’re first starting out. Tools are necessary for any escape plan, and are created from combining components, but figuring out which components combine to create what is extremely annoying. Furthermore, bad luck oftentimes screws you just as you’re about to make your move.

Early on, I had finally managed to break into the ventilation system and was making some serious progress in escaping, when suddenly a guard saw my cell was missing a ventilation cover, and I was discovered. That’s when I learned that I needed to create a fake ventilation cover to not be undone next time, which meant I needed to figure out which components could be combined to create one, which took nearly another hour of experimenting. In another instance I flushed some valuable resources down the toilet moments before guards did a random search of my cell. I assumed I’d be able to recover my items at any time, only to discover that unless I got a plunger and fetched them within a certain time frame, they were gone forever. These aggravating experiences are constantly present throughout the game, although with patience become less-frequent.

The Escapists also has a fair amount of idle waiting. Planning takes patience and this sometimes means standing around and waiting for your moment to strike. You’ll spend hours washing laundry, eating meals, marching in place, and taking showers before anything interesting happens. Luckily, this annoyance becomes less prominent once the player learns how the game works a little more, and so is able to skip out on mealtime and instead spend that hour burrowing their way to freedom.

The visual presentation of The Escapists is a retro pixel art that is quite well done. Characters and objects are simple, but easily identifiable, and each prison has a ton of character, from the country-club feel of the early jailhouses to the dystopian hellscape look of the final stages. The sound of The Escapists is equally memorable, which features humorous sound effects and covert-themed tunes

The controls on console work much like Minecraft’s with an inventory bar across the bottom of the screen, and the result is equally effective. It’s likely not as easy to use as the PC version, but works well enough so that most players can get the hang of it quickly and acclimate.

The Escapists gets bogged down by long stretches of waiting and unfortunate nuances that can leave the player reeling in frustration, but for the most part it succeeds in being an entertaining puzzler that requires the player to get creative. At $15, it’s worth picking up if you think you can stand the grind of learning the game’s various mechanics.

Developer Mouldy Toof Studios’ The Escapists has already received two reviews at Gaming Trend, so in reviewing the PS4 version, I’ll be focusing on what’s different. I gave the Xbox One version a fairly positive review. My fellow editor Spencer Campbell gave the PC version a negative review. The gist of these two reviews is that The Escapists can be tedious, and may not be for everyone, but can be pretty enjoyable to those that are patient enough to learn the title’s complicated mechanics.

The PS4 version comes a few months after the Xbox One and PC versions, and has almost no recognizable changes. The graphics are intentionally simple (and so have parity across all versions), the controls are less intuitive on consoles than on PC, and the game has not been altered (so far as I can tell) in the months since its initial launch.

The only real addition to the PS4 version is that the Alcatraz DLC has been bundled with the core game. The Alcatraz DLC adds an even more challenging prison with a unique obstacle — the prison is completely surrounded by miles of water. As a local to San Francisco, this particular prison holds a special place in my heart. The additional prison adds a few additional hours to The Escapists, but doesn’t alter gameplay in any major way.

The Escapists is an entertaining open-ended puzzler that delivers plenty of challenge for those possessing the patience to overcome it.

You know that jerk online that relentlessly trash talks you after every kill? That guy was probably Travis "Tie Guy" Northup. Competitive, snarky, and constantly wearing a tie, Travis has been writing his opinions about electronic media since he was a teenager, and is pretty much the only person to hold his opinions in high regard.
Related Articles: The Escapists
Share
Tweet
Share
Submit