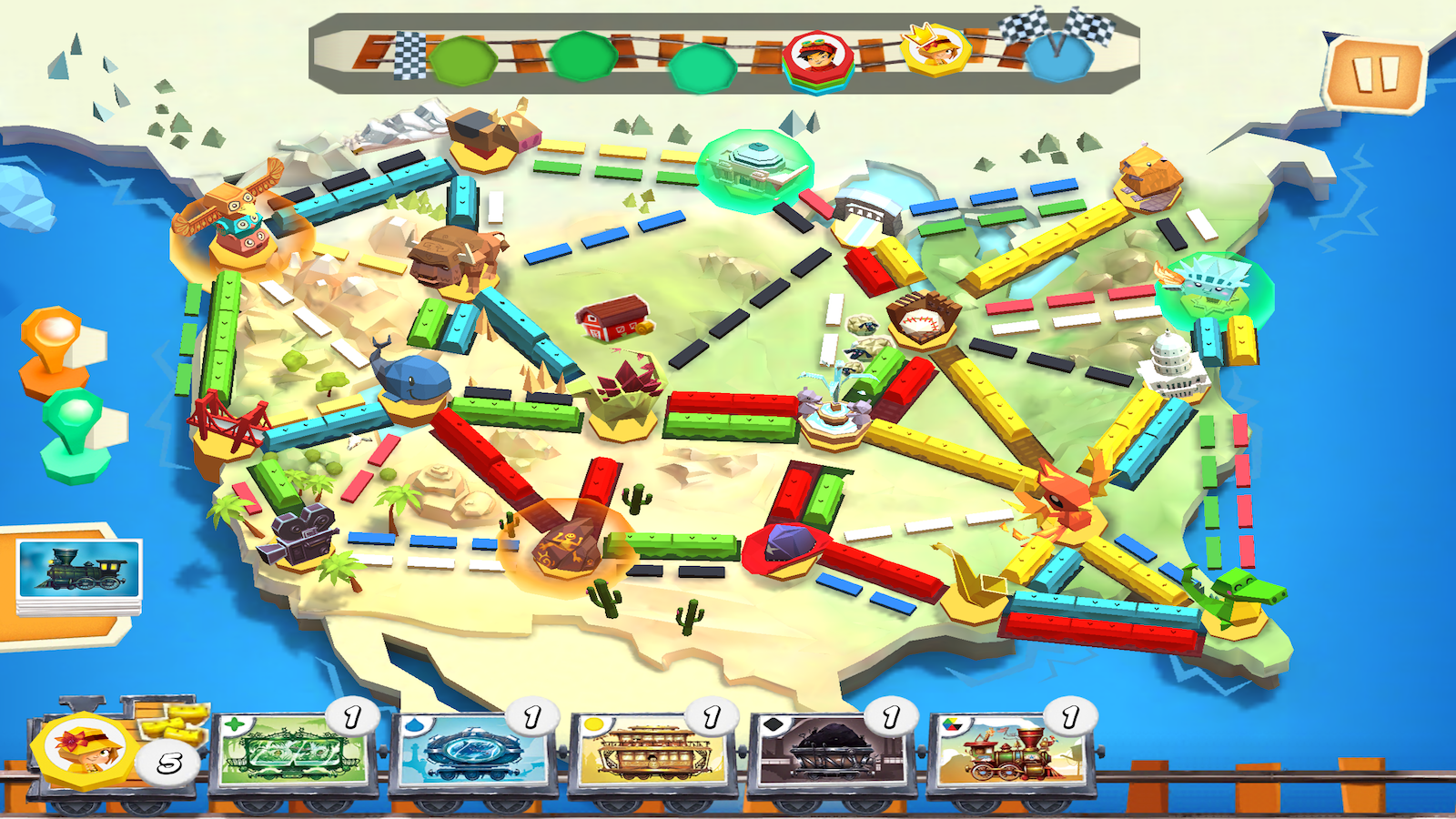 When I think of games that helped launch this Renaissance Age of board gaming, I have to include Ticket to Ride on that list. With millions of copies sold, Ticket to Ride rode its success with multiple expansions and variants where people can build railways in locations across the globe. It’s no surprise that its family-friendly nature would eventually inspire a kids version, which Days of Wonder did with its release of the board game Ticket to Ride First Journey in 2016. Developed by Days of Wonder’s parent company, Asmodee, this junior version has now hit portable devices, being released under the same name for Steam, Android, and iOS.

In the original game, your goal was to collect train cards of the same color, with an engine wildcard available as well, and once you have the same amount of cards as the corresponding colored track on the board, you get to lay your train cards down and score points. Eventually, you pushed to connect the two cities on card drawn destination tickets which would score you bonus points if completed (or subtract points if you failed). You’d play until someone is down to two or less train cars, and then the player with the most points wins.

Everything about the presentation is geared towards kids, from the cartoonish animation to the vivid colors.

In First Journey you play exactly the same way: You collect cards, lay trains, connect cities, and score points. The difference isn’t that the rules have been stripped down so much as the ease of bookkeeping points and locating cities.

The map of the United States is designed to be kid-friendly. Cartoonish icons that represent cities dot the landscape, like the Capitol Building for Washington, D.C., or the Golden Gate Bridge for San Francisco. Cities glow to show which ones need to be completed for destination tickets, and there are also less cities to clutter the map, both of which are fantastic additions to make it very easy for children to navigate. A European map is available once you sign up for a free account on Asmodee’s website.

Destination tickets are all worth the same amount, one point, regardless of distance, and players no longer lose points for incomplete tickets, and you can get a bonus point for being the first player to connect trains from the east to west coast. The first player to six points wins the game. Your performance in the game can unlock animated extras, icons that are added to the map. They don’t add to game play, but they are an achievement that some may want to strive to collect.

Destination cities are highlighted to help you find them to complete tickets.

The presentation is fantastic, and it takes no time for kids to hop right into the action with minimal instruction. Asmodee achieved its goal of creating a streamlined version that would appeal to kids, but there are some unwanted changes that came along with the simplicity.

In some ways, the luck aspect of the game is a bit crueler now. You have no upturned train cards from which to choose, so you are at the mercy of your card draw each turn. You also have no control over which destination tickets you get; you must take whatever is drawn. In either case, you may find yourself with completely wasted turns, which is a major setback in this faster playing version. This could frustrate younger players.

Both the North American and European maps are adorned with icons that represent each city.

The game supports a mixture of two to four human (pass and play) and AI players. With fewer cities on the map, the game can get quite crowded in the later stages with four players vying for space. For those young ones just starting out, it may be best to open with just one or two opponents.

I also understand that simplicity would lead to less decision making, but in some ways the game is playing you rather than the other way around. Picking the best destination ticket for you or selecting from upturned train cards gives you options. Here, you draw cards and play them as you get the right ones you need for where you are going. There is no thinking in this game. You’ll only be wondering where can I lay trains down with the cards I have available to help connect the cities on my tickets. For a game that introduces kids to what is a brilliant, family series, it is a shame the game lacks even the basic of problem solving skills.

That’s not to say the game isn’t worth looking at. This is a solid introductory game that kids will enjoy. The original Ticket to Ride isn’t a complicated game, so you may find that the shelf life of First Journey is limited. Eventually, and hopefully, kids will want to move on to a tougher challenge, and this can open the door to a wealth of other games. That alone makes makes First Journey worth the price on Android and iOS, where $1.99 is a great deal. However, Steam’s $4.99 tag may not be worth it for a game with questionable longevity.

Ticket to Ride First Journey combines colorful graphics and simplistic rules into a game that’s bound to appeal to children. The game is heavily luck based which may discourage some, and there’s not a real challenge to be had with its gameplay. Still, on an Android or iOS device, the price to introduce kids into a world of gaming is worth it.