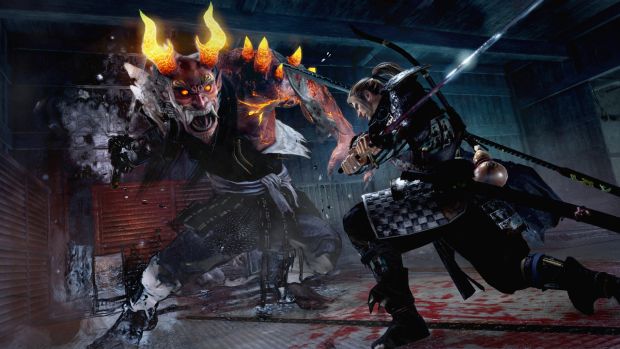 After over 12 years in development, Nioh plays like a compilation of every hack-and-slash RPG since the early 2000s, and while it’s almost tempting to write off most of the gameplay as being derivative of From Software’s recent action RPGs, like Bloodborne and the Dark Souls franchise, there’s so much more to the game than that. With its fast paced, often acrobatic combat, Nioh is a Team Ninja game through and through, perfectly matching the signature hack-and-slash style of Ninja Gaiden, but with plenty of new twists. It’s a game that invites you to explore its many levels for loot, hidden enemies, and other collectibles, and while Nioh’s opening level almost lost me completely, it’s easy to lose hours into this fantastic hack-and-slash action RPG .

Nioh follows the adventures of William Adams, a real-life English sailor who became the first of his nation to reach Japan, eventually becoming a samurai himself. However, all pretenses Nioh has of being a work of historical fiction begin and end with character’s names, though fans of English and Japanese history will appreciate the nods to real-world events of the time. Adams has been imprisoned in London, where he learns of a sinister plot from strange forces within the British empire to instigate a war between England and Japan in order to steal as much Amrita, a powerful mystical resource, as possible. Adams travels to Japan to prevent the war, fighting man and oni alike with a mixture of swordplay and magic. The plot of Nioh is probably one of the game’s weaker aspects, and chances are you’ve seen this sort of story numerous times before. It almost seems like the developers wanted to say something about British colonialism and its effect on other countries, but this effect is immediately nullified by the villains being so cartoonishly evil that it’s impossible to take them seriously. Overall, the story is merely a way to guide the player from one awesome level to the next, with a few cool moments in between but nothing substantial overall.

While the story might be negligible, Nioh’s levels are huge both in size and in content. Each one is filled with multiple pathways for progression, with the many trails and roads loaded with enemies to fight and loot to collect. If it looks like a way forward, it probably is, and I delighted in finding all of the different paths to take. Not only that, but there are plenty of secrets to find as well. Minibosses are hidden in caves, houses, and off-the-beaten-path clearings, challenging those foolish enough to search for them. On a happier note, there are also the adorable Kodama, bright green spirits that wear cracked bowls on their heads, which will reward you for finding them with blessings and bonuses. Both provide plenty of incentive to scour every inch of the level.

Nioh’s combat is difficult to master at first, but a joy to play once you finally grasp it. On the surface, it plays like a lot of recent action RPGs, albeit a bit quicker, but there are many layers to it. First off, playing well enough to continue past the first few levels requires an understanding of the three stances available. High is better for offensive play but uses more Ki, the game’s equivalent to stamina, whereas low is more defensive and less resource intensive, and medium is a mix of both.

Switching stances, depending on enemy type and how much health you have, is vital if you plan on getting farther than the first level, as is mastery of Ki. While Ki replenishes passively at a slow rate, you can expedite the process by tapping a button after each successful attack. While that change caught me off guard early on, it lends combat a pleasant cadence, as tapping in time to the attacks instills each fight with a sense of rhythm. Nioh’s gameplay is like a choreographed dance, mixing twitch reflexes, careful planning, and rhythmic timing. Being an RPG, Nioh has plenty of choices when it come to how you want to play. Swords are quick, axes are slow but do a lot of damage, and other weapons such as spears, chains, and dual-wielded swords run everything in-between in regards to range, attack power, and Ki usage. There are also shrines, where praying saves your progress, respawns enemies, and allows you to level up or choose a new spirit animal, a guardian that grants you a passive bonus and serves as your “living weapon.”

Nioh offers a lot of customization options as well, which go a long way towards making it accessible for all players. For example, while I didn’t see an option to rebind all controls, there are several control layouts for players to choose from, generally based off of other popular action RPGS. I found that the one similar to the Dark Souls series was the easiest to get used to, but all of them seemed to work fairly well.

One feature that I particularly appreciated was the option to sacrifice a bit of the game’s texture quality and overall graphical polish to raise the game’s framerate to 60 frames per second. Given the high speed of gameplay, I found this option useful, and it’s a testament to the game’s overall aesthetic style that it manages to look stunning even with the significant downgrade. There’s a lot of high-contrast light and shadow, with plenty of torches and lit braziers brightening up the Nioh’s otherwise gloomy color palette. If I have one major criticism of Nioh, it would be that the first level is easily the worst part of the game. While first impressions aren’t everything, and the rest of the game more than makes up for it, the first hour of the game does almost everything wrong. Sending you against enemies that can kill you in three hits without a proper tutorial or weapons, sporting confusing level design that relies too much on backtracking to be fun, and an overall lack in the variety of enemies or loot drops that makes the latter levels so memorable.

The first boss fight is also pitifully easy, and even his second form goes down in less than a minute with minimal effort. Not only that, but you never get a chance to level up during the opening chapter and you lose all the gear you collected in the end, making any exploration you did pointless. Not only is the opening level missing everything that makes the rest of the game special, it doesn’t even make a good tutorial: Ki isn’t explained until an optional tutorial unlocked after you complete the first level. With the exception of a few plot elements that could easily be conveyed in a cutscene, nothing would be lost if this level was axed.

Nioh is easily the best action RPG I’ve played in some time. It may take some time to get into the swing of it’s melee combat, and the first level doesn’t make a good impression, but anyone looking for some engrossing hack-and-slash combat should pick this up with Nioh hesitation.