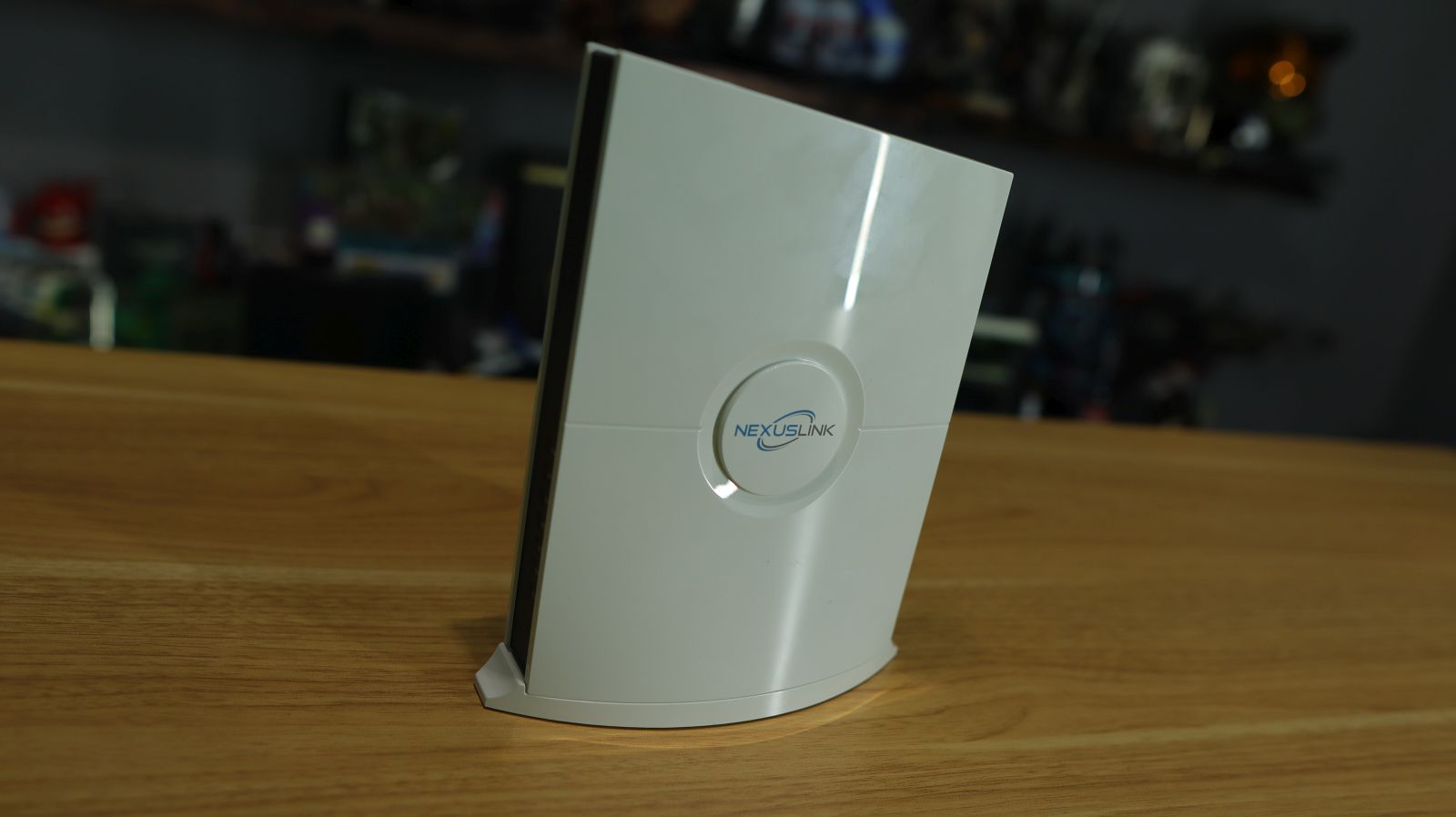 Everything in your house is wireless. If you are living in a smart home, that can be every single light bulb, all Alexa or Google Home devices, your Ring doorbell and cameras, NVIDIA Shield or Apple TV, your Xbox, PlayStation, Switch, laptop, cell phones, smart smoke detectors, Nest thermostats, Kindles – even a cordless phone, if you still have one of those. The point is, we live in a very crowded WiFi space, and often with a mix of 2.4Ghz and 5Ghz in the same home. It’s no wonder you can fire up your favorite VR headset and go wireless only to have a terrible experience, despite being directly in front of your PC and a few feet from a router. With nausea swirling around your head, you know there has to be a better way. Well, there is – and we’ll have to go back in time to get it. Let’s talk about the Nexus Link Wireless Gaming Bridge, and why something old is something new, and something new is exactly what we need.

To understand what a bridge does, you need to know what a router and a switch are and how they all interconnect. Starting from the endpoint and working backwards, it’ll all be made clear. We’ll cheat a bit and say that your PC is the endpoint in this case. Your PC wants to get to another PC on your network, but it doesn’t know how to get there. It reaches out with its network card and asks everyone who will listen “Hey, can I find this other PC?!”, to which your Switch responds “That’s me!”. Your switch is a dirty liar, but the packet heads that way anyway. Your switch then says “Yeah, I know I said it was me but uh…it’s actually this guy over here” and points to your router. Your router is a damned liar too and it insists that it is the PC in question, but really it knows your other PC is back down the stack to another switch in your house. It rewrites the packet source and destination, sends it down another ethernet cable, to another switch, and ultimately to PC #2. It’s incredibly complex, full of deception as packets are written and re-written, and a whole lot of hoops that introduce a ton of complexity. 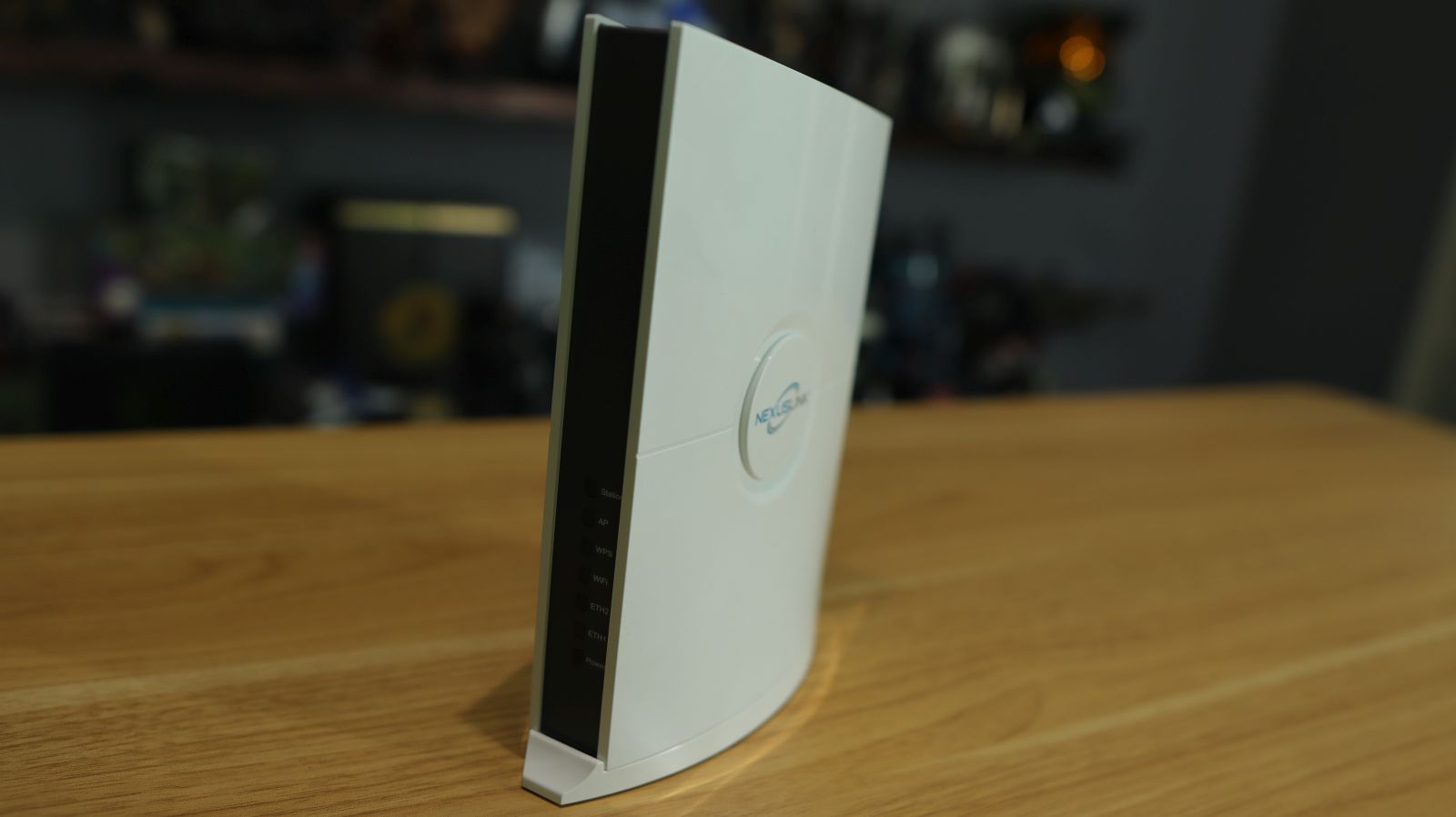 Wireless connectivity does the same exact thing, but it reaches out directly to your router. In most homes you probably have a single router shouting as loud as it can to reach all the devices in your house. Unfortunately, your Internet Service Provider wants to tuck your demarcation point that connects to your modem in the most isolated part of your home, often against a far wall in an office instead of in the middle where it’d do the most good. Add in that these routers shouting over each other means I can see my neighbor’s routers in every direction and it makes for a messy space. Assuming a single router, and assuming 2.4Ghz for simplicity, you have a handful of channels where your router can broadcast. There are a total of 11 usable channels, as you can see below. It’s recommended that you use channels 1, 6, and 11, and when you see how things overlap in the image below, it’s easy to see why.

When you have devices using channel 1, and then another device (perhaps again a neighbor?) who decides to use channel 2 due to “slow speeds”, you can see that they are stepping on a major chunk of your overall bandwidth. Put simply, 2.4 Ghz is incredibly crowded. As such, companies developed ways to combat this. 5GHz band is one way.

The 5Ghz band uses channels that are 40MHz wide. This also means they travel half as far, but also twice as much bandwidth. More than this, they are also non-overlapping, so there is no channel collision. I promise this is going somewhere, so stick with me here.

Most devices are moving to the 5GHz band. The channels may not collide, but they can and do become saturated. Technologies like MIMO (multi-in, multi-out) can separate the 2.4GHz out and onto a separate antenna to help keep the 5GHz channels clear, but more use is just more use. With things like your Netflix stream, your devices can afford to wait a few more milliseconds and you likely won’t even notice. But what happens when you are streaming over 90 frames per second directly to your eyes, capturing inputs, and carrying those all back to your PC in real time? Let’s talk about virtual reality. 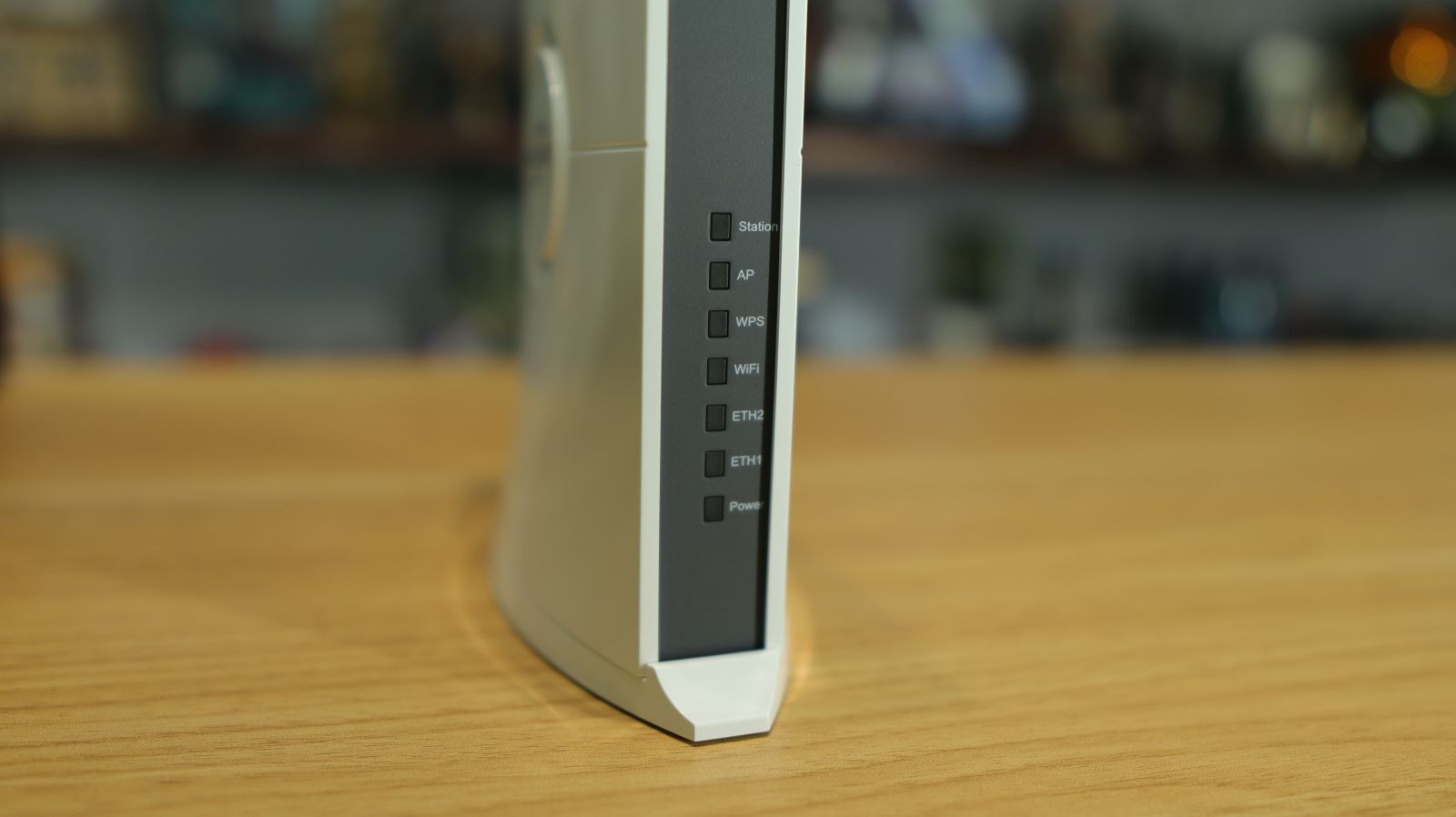 In virtual reality, you really need over 90 frames per second for the experience to be comfortable. Anything less and you might have nausea, or you could see large blocks of black where portions aren’t being rendered in time. If you ever want to simulate this, simply have your PC download an update for a Steam game while also streaming wirelessly to your VR headset. Bandwidth contention over wireless will rear its head, and you’ll probably get to see what your lunch looks like all over again. Enter the NexusLink.

I know it was a long road to get here, but it’s important to understand how this works rather than waving your arms at it and saying “magic”. The NexusLink Wireless Gaming Bridge is essentially a router that is acting as a dedicated bridge directly to your primary router. Simply plugging it into a port on your router, the NexusLink will immediately begin broadcasting a new wireless SSID – in my case “NexusLink_A030”. This SSID is exclusively for my wireless VR headset. No matter what else is happening on my network, no matter what other channels are being used, this link is ONLY for VR. I connect my PC to that link wirelessly, I connect my VR headset to that link wirelessly, and they are ready for gaming. 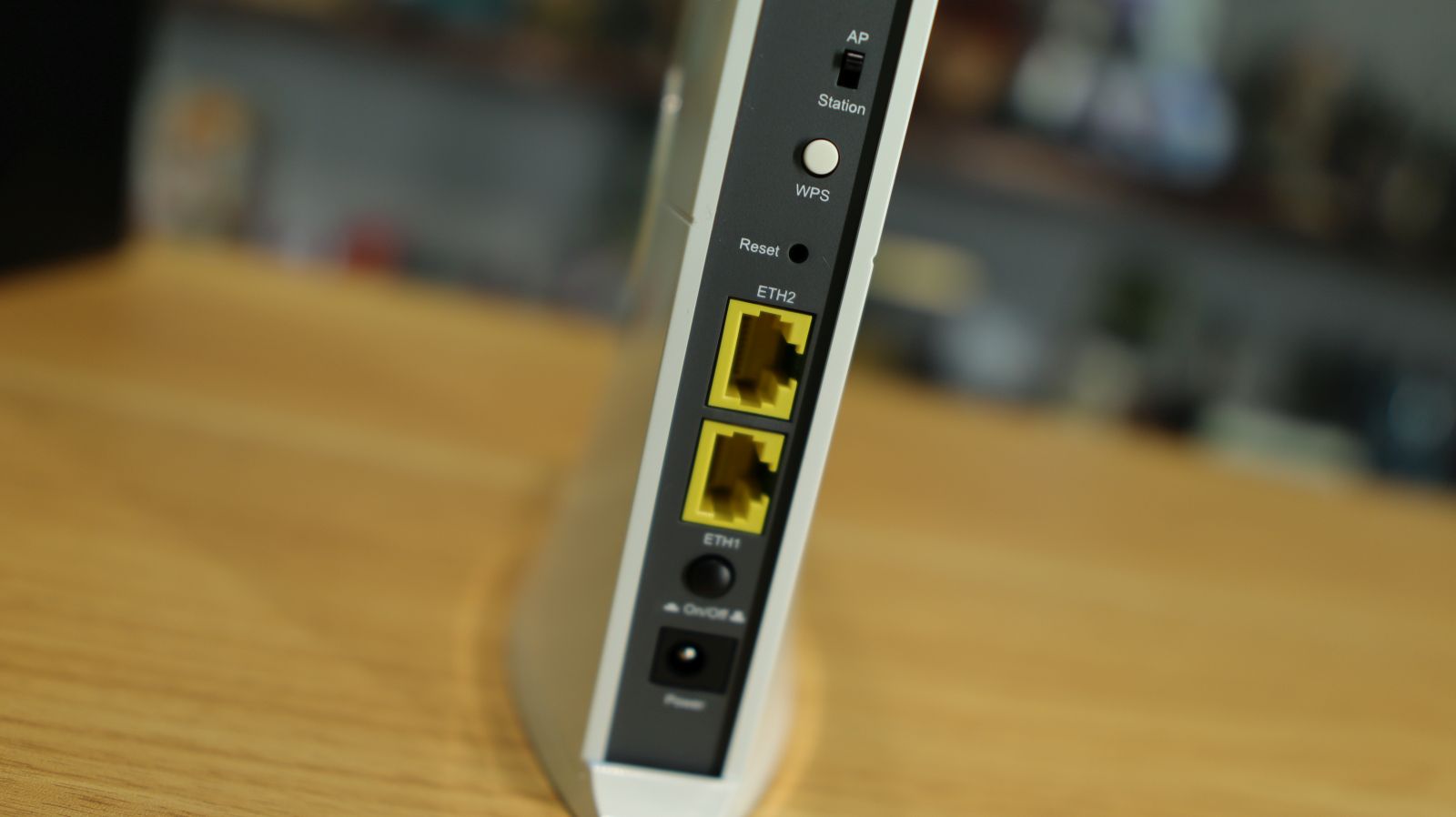 To properly test the NexusLink, I used both the HTC Vive Cosmos using the Wireless Adapter, as well as an Oculus Quest 2, using both Airlink and Virtual Desktop to play Steam games. In the past, I’ve struggled with latency, especially from the latter. I’m not sure if it’s the various electronics that are littered throughout my home, or the miscellaneous soundproofing and thermal layers embedded in the walls, but if it isn’t wired in my house, it’s gonna struggle. Surprisingly, the NexusLink was able to cut through all of this.

It’s really hard to demonstrate when wireless is working, but there are a few things you can look to as clear indicators. With wireless VR streaming, when things go sideways it often manifests as framerate drops, or you might see the screen tear. Sometimes you’ll see black blocks at the edges of your vision, which is extraordinarily disorienting. If you are a nausea sufferer, then you know that’s a death sentence for any fun you had planned. Well, I’m happy to report that other than a single drop in graphical fidelity for a brief moment, literally hours of testing was…uneventful. Truthfully, that’s the best possible outcome. Literally nothing happened. No latency, no drops, no black boxes. Just pure, untethered, Steam-streaming goodness.

The only drag with the NexusLink is that it’s a complete black box. You can’t change the SSID or password that I can see, and there’s little in the way of configuration. This is great as it’s easy to use, but not so great if you want to adjust it in any way. I suppose that’s just the cost of simplicity.

The NexusLink Wireless Gaming Bridge does precisely what it advertises. Using MU-MIMO and QoS, it delivers perfectly clear wireless signal directly between my PC and my VR headset without the need to worry about whether or not my Alexa, NVIDIA Shield, or WiFi-connected knockoff-brand lightbulbs might be dragging it down. In the end, it’s delightfully boring – exactly what you want in your infrastructure.

Ron Burke is the Editor in Chief for Gaming Trend. Currently living in Fort Worth, Texas, Ron is an old-school gamer who enjoys CRPGs, action/adventure, platformers, music games, and has recently gotten into tabletop gaming. Ron is also a fourth degree black belt, with a Master's rank in Matsumura Seito Shōrin-ryū, Moo Duk Kwan Tang Soo Do, Universal Tang Soo Do Alliance, and International Tang Soo Do Federation. He also holds ranks in several other styles in his search to be a well-rounded fighter. Ron has been married to Gaming Trend Editor, Laura Burke, for 21 years. They have three dogs - Pazuzu (Irish Terrier), Atë, and Calliope (both Australian Kelpie/Pit Bull mixes).
Related Articles: Hardware, NexusLink Wireless Gaming Bridge, VR
Share
Tweet
Share
Submit