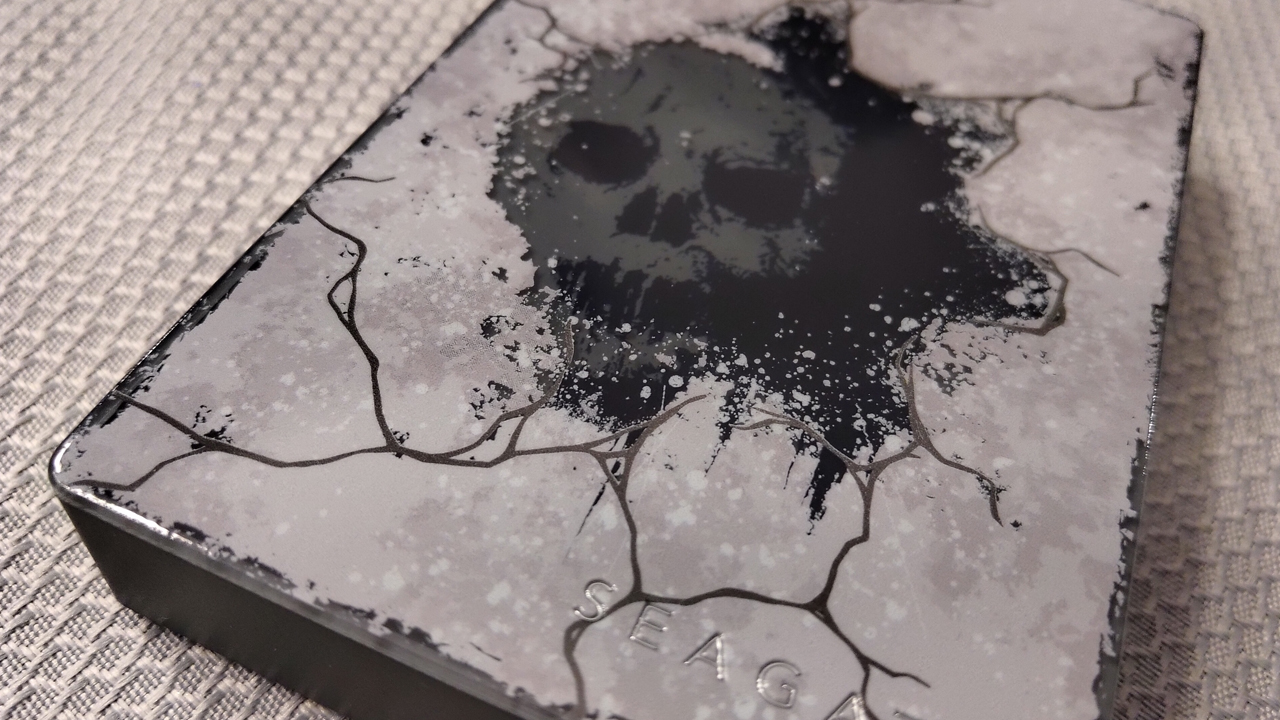 The next highly-anticipated installment in the venerated Gears of War series is on the horizon, and Microsoft is celebrating the upcoming launch. Not only have they announced a limited edition Gears of War 5 Edition Xbox One X (you can see it here), they’ve also teamed up with Seagate to offer up two themed hard drives to help hold all of the every-larger games in the Xbox catalog.

Before we dig into performance, let’s crack open the box and see what’s inside. While it’s true that any USB 3.0 hard drive will work perfectly on the Xbox One, the price between this Gears of War 5 drive and a bare-bones drive is about $25. For that extra bit of cash you get a month of Xbox Game Pass (which includes Gears of War 5 access four days before launch), as well as Ice Block Lancer, Snub, and Gnasher weapon skins, and some extra in-game supply drops to get you rolling. Maybe it’s a small thing for others, but I’m also happy to see a nice braided cable to connect the device to your system, ensuring it doesn’t get tangled up or have any breakages. Whether you pick up the special edition Xbox One X or not, you’ll also have a pretty cool looking drive to hold all your games, with the Gears of War 5 Frozen Omen logo on top.

Beyond aesthetics, it was time to put this drive through its paces. Since usability on the drive is literally plug-and-play (connecting it to the Xbox One X, it immediately recognizes and formats it for use without a fuss), I’ll focus instead on performance. We have looked at the SSD Seagate Game Drive drive format (the review of the 1TB version can be seen here) and benchmarked it, seeing it hit 537 MB/s almost immediately and staying there across the entire array of tests. Rotational storage drives like this one have a theoretical speed maximum of around 140 MB/s, but also come in at less than half the price. Let’s fire up our hard drive testing systems and see where this one lands. 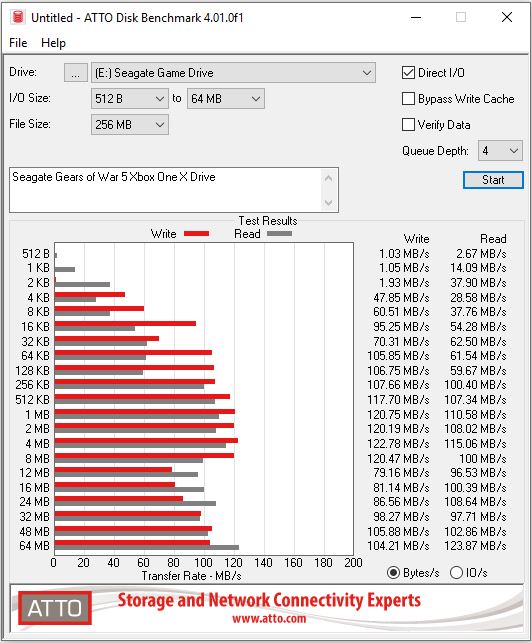 As you can see, once the drive gets into file sizes beyond 64 KB, the drive’s performance gets highly consistent. While it unsurprisingly doesn’t hit that theoretical 140 MB/s, it does outperform most mechanical drives I’ve tested which land closer to the 90 MB/s mark for writes. I re-ran this benchmark five more times, and again five more times with the drive halfway loaded and saw almost the exact same results. The drive is certainly consistent.

I do have two complaints with this drive — comparative pricing and warranty. If you are in Australia, India, and China, you get a three year warranty. If you reside outside of the Americas, but not in those three countries I just mentioned (e.g. If you live in England, Africa, Russia, Greenland, Iceland) you get a two year warranty. If you live in North America or South America however, you get a whisper-thin one year limited warranty. While I can’t say I’ve had a failure of a Seagate drive inside of a five year period (and often far longer — I use them for my NAS, and often with tens of thousands of always-on cycles), I hate having to lean on Squaretrade to get that number to a more acceptable three year warranty. In terms of price, Seagate sells a 5TB USB 3.0 hard drive for $119.99 without the Gears logo, Xbox Game Pass, extra loot, and without a braided cable, and it comes with a two year warranty. Know going in that you are paying a $30 premium for the extra content and aesthetics.

There are two sizes for this special edition Gears 5 drive — a 2TB drive at $99.99, and a 5TB drive for $149.99. While you always hear “limited quantities” let me inform you that the special edition Gears of War 4 themed drives sell for nearly $500 on eBay, so they are pretty hard to come by once they are gone. If you are a Gears fan, you’ll want to get one of these before they sell out.

With aesthetics to match the special edition Gears of War 5 Xbox One X, this drive will provide install space for over 150 games, and at top-shelf speed for rotational storage, as well as a free month of Xbox Game Pass and some DLC, but at a slight premium and a thinner warranty.

Ron Burke is the Editor in Chief for Gaming Trend. Currently living in Fort Worth, Texas, Ron is an old-school gamer who enjoys CRPGs, action/adventure, platformers, music games, and has recently gotten into tabletop gaming. Ron is also a fourth degree black belt, with a Master's rank in Matsumura Seito Shōrin-ryū, Moo Duk Kwan Tang Soo Do, Universal Tang Soo Do Alliance, and International Tang Soo Do Federation. He also holds ranks in several other styles in his search to be a well-rounded fighter. Ron has been married to Gaming Trend Editor, Laura Burke, for 21 years. They have three dogs - Pazuzu (Irish Terrier), Atë, and Calliope (both Australian Kelpie/Pit Bull mixes).
Related Articles: Hardware, Seagate Gears of War 5 Special Edition HDD
Share
Tweet
Share
Submit