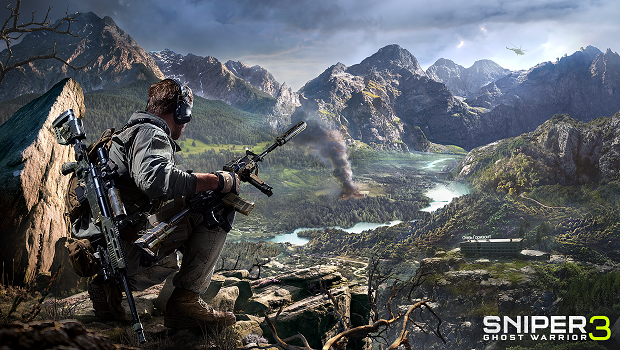 A few months ago, I played through Sniper: Ghost Warrior 3’s beta and was roundly impressed. Needless to say, both my excitement and my expectations were running high prior to getting my hands on the full version after such an enjoyable beta. At the time of writing, I’ve put over 30 intensely focused hours into Sniper: Ghost Warrior 3 (SGW3) on PC and—*drum roll*—it did not disappoint.

In SGW3, you play as an elite US Marine Corps marksman named Jon North. You’re operating in the former Soviet republic of Georgia with a civil war erupting all around you. As you work to dismantle the separatist threat, you discover the existence of a mysterious group, one that may also be responsible for the capture of your little brother, Robert.

The storyline, although it tries to tug at your heartstrings, fails to have much of an impact, unfortunately. In order to believe the significance of Jon’s relationship with his brother (which drives much of the story), as well as relationships with others you meet along the way, a good deal more history between the characters needs to be established. These bonds are key to the plot but never truly feel much more than surface level and secondary to the larger civil war/secret organization conflict at hand.

The voice acting and dialogue had their ups and downs, such as the Israeli Mossad agent that sounds distinctly French, or the lines wherein the North brothers can’t seem to figure out if they’re in the Marines, the Army or the Navy. Although nothing special, the acting and the script are serviceable enough to be believable and get the job done.

Thankfully, SGW3 does not need a particularly gripping narrative to succeed when it does exactly what it sets out to do so well.

As the name would suggest, SGW3 heavily emphasizes marksmanship, and since you play as a sniper, this is your bread and butter. You’ve got to contend with natural aiming sway, which worsens depending on your body position. Bullet drop and wind must also be compensated for by using the range adjustments and wind indicators on your scope. The challenge of overcoming all of these adverse factors is always welcome and scales well with your progress through the game. Similarly, the thrill of the slow-motion bullet cam tracking your shot all the way to your target never gets old or intrusive. It may not be revolutionary, but that doesn’t at all detract from its greatness.

Scouting a mission area with your drone, planning your infiltration route, and picking off unsuspecting guards on a smoke break never got tiresome, not even once. The player map even includes contour lines, making it easy to find high ground.

Although long-distance engagements are a mainstay of SGW3, this shooter’s true strength lay in its ability to force you out of your perch. Indeed, there are some missions that can be completed by quietly popping a few heads from afar, many of your objectives will involve getting your hands dirty, or in this case, bloody. You can approach quietly under the cover of darkness, dispatching enemies with a hand over the mouth and a blade to the throat or use your suppressed sidearm. You can also threaten and interrogate your enemies to uncover the locations of other baddies, objectives, or resources as you go.

Alternatively, for those who’ve played a bit too much Call of Duty, there’s always the run-and-gun option. The aiming and recoil mechanics in SGW3 are deliberately more realistic than many other shooters, as is your character’s ability to soak up lead, so I found this approach to be risky and challenging. And again, this is one of the game’s highlights. When you screw up and blow your cover—and you will—you’ve got no choice but to get stuck into a frenzied firefight.

Between missions you’ll probably be tinkering in your safe house. Here you can sleep to heal or pass the time, choose a new assignment, purchase and modify weapons, or craft bullets and equipment on your workbench. While the weapon selection and modifications were nice, the crafting seemed superfluous. The resources you gather off of bodies and throughout the world can be used to construct new items or bullets, but I never had a shortage of money, so I never resorted to my workbench for resupply.

The linear campaign structure includes a healthy variation in mission types and parameters which ensures that the experience remains interesting throughout and that all of the aforementioned playstyles are utilized. At one point I stole a wine truck so that I could sneak into a wedding. I also rescued American engineers from a dam reminiscent of Brosnan’s Goldeneye, hacked into satellites, and completed the occasional “go blow this thing up” assignment. Sometimes, changing circumstances would shift your objectives mid-mission, giving you the thrill of having to adapt and improvise on the fly.

SGW3’s mission diversity also serves to take full advantage of the game’s franchise-first open world format. The open-world, although shallow in depth compared to the standard set by many modern RPGs, allows you to explore new approaches and get creative with the selection of weapons and gadgets at your disposal. Various collectibles, high-value targets, and points of interest are scattered around the map, as well as a smattering of side missions and fast travel points for quick navigation.

CI Games did an outstanding job creating the open world landscape. It was entrancing and eerily quiet with its snowcapped mountain ranges, rivers, lakes, forests, and quaint villages all dotted with dilapidated and ominous Soviet era concrete monstrosities. With a respectable draw distance and lighting effects from both the sun and the moon that helped accentuate the beauty of Georgia, I was regularly struck by this game’s visual appeal. The soundtrack was a well-matched complement to the setting as well. In fairness, however, close-up textures were blurry and unimpressive, but thankfully never managed to diminish the overall splendor.

Many have complained of graphical glitches or performance issues on PS4, or freezes and framerate hiccups on PC. I managed to avoid nearly all of that (lucky me), but did encounter some minor problems of my own. A handful of times, my character got stuck in the terrain, forcing me to reload. Load times were rather substantial as well. None of the issues I ran into were frustrating enough to sour my enjoyment or the overall experience though.

Marek Tymiński, CEO of CI Games, publicly addressed the complaints about SGW3. Here’s an excerpt from the press release:

The game is being received well in the market and we are collecting valuable feedback from players and are actively taking steps to make sure that Sniper Ghost Warrior 3 is even better moving forward. So, I wanted to explain what our plans are in support for the game:

We’re 100% committed to making the best game we can. Thanks again to all of the people who have supported us so far. We couldn’t have done this without you.

Seeing a developer react quickly, publicly, and positively in response to complaints about its game is a very encouraging sign for the future of SGW3 itself, and the franchise as a whole, not to mention the future of CI Games. This is exactly the sort of engagement and acknowledgement that gamers want and deserve. Bravo, CI Games, bravo.

A slick sniping title in name, but one that also encourages creativity, delivers action, and demands adaptation, Sniper: Ghost Warrior 3 is one hell of a ride. Although it has a lackluster story and a handful of minor issues, it’s still an immensely enjoyable separatist kill fest set in the gorgeous open-world landscapes of former Soviet Georgia.