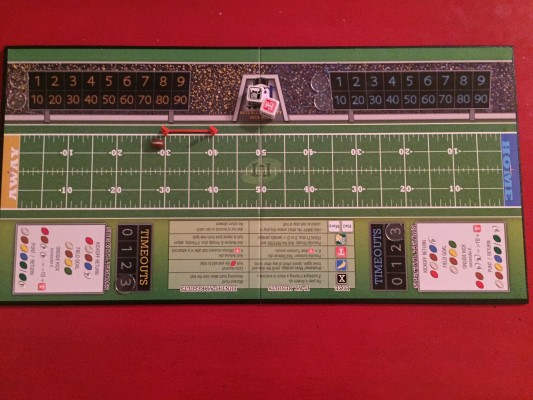 I really don’t follow sports except for football. The fact the season is only sixteen games long makes every matchup important. However, the wait between the Super Bowl and the regular season kickoff seems excruciatingly long. The NFL has done a great job to make the combines, draft, training camp, and pre-season seem like events, but there is nothing like the first kick-off in the opening game of the series. While there is Madden on the consoles, a few board games have been made to recreate the battle of the gridiron. At one time the champ was Pizza Box Football, but then the new challenger 1st and Goal came into town to try to take the Lombardi Statue away.

After opening the box, I admit I was surprised by some of the components. Here’s the full listing:

The two card decks seem stiff, with a heavy glossy sheen over them. The dice engraved with deep grooves seem durable, which is important since they are all different colors. The colors on the dice indicate which ones are rolled depending on the play calling. The magnetic football and flag markers are an unexpected surprise, and it really helps to keep track of where the ball should be. You also don’t have to worry about the dice rolling moving your pieces. This small touch from R&R Games really impressed me. The fact the yard sticks measure exactly ten yards on the board shows how much attention to detail paid by them to make the components accurate.

The board feels like a football stadium. The top third represents the scoreboard and crowd, while the middle third represents the football field separated into four columns. Each column represents a down. The left one represents First Down, the second one is used for Second Down, and so on. This mechanic simplifies keeping track of the current down without trying to remember to move a marker. The bottom third shows references to the possible results on the dice, dice to roll for special plays like punts, kickoffs, and field goals, as well as an area indicating the number of timeouts each player has. Everything is laid out logically and shows useful information without feeling cluttered.

I’m going to assume that you have some idea of how to play football. Mechanics for kickoffs, punts, and field goals are included, but most of the time you will be calling plays with the offense and defense deck. When possession changes, players switch the deck they are currently using. Each player draws eight cards for their hand. Each one has the name of a play at the top, with the name of the opposing player’s plays listed below. Both the offensive and defensive players choose their play from what is in their hand. Once both players have selected their play, they reveal it at the same time. The plays are matched up and the cards show which dice are rolled.

Seven color-coded dice represent the yards gained on the play. Three dice are used mostly for passing plays, three other dice are used mostly for running plays, and a black die is rolled by the defense and usually shows negative numbers. These dice aren’t typical dice, as they show values like five, seven, eight, ten, fourteen, and sixteen, making big gains possible. If the defense chooses a play that matches perfectly against the offense, it’s possible a single die along with the defense die is rolled. If a passing play is called against a run defense, all three pass dice and the defense die could be rolled. Certain yardage dice can be used for kickoffs, punts, and field goals.

Each roll also includes a play die that provides some unpredictability to every play. It can cause the entire roll to be nullified to zero, which can actually work to the offense’s advantage if they roll negative yards. Another side indicates a possible turnover. When it shows up, the referee die is rolled. If it rolls the turnover side, the offense and defense switch. Another side shows the a possible penalty, which causes the referee and penalty dice to get rolled and see which side is penalized and for how many yards. Finally, the breakaway side gives the impression of the ball carrier evading tackles, and allows the offense to reroll all of the yardage dice rolled and hopefully add even more yards to the play.

At first, all the steps can feel a little fidgety. Selecting the play, looking up the dice to be rolled, rolling the dice, adding up the yardage, and moving the ball can take a while when you start out, especially when you have to determine what the play die side means. Once you play a few rounds, it gets easier and by the end of the game the plays move quickly from one side of the board to the other.

The game is completely balanced since both players play from the same deck, so it assumes that both offenses and defenses have equal strength. While it makes for an even game, it doesn’t simulate real football. Six expansion sets with four teams in each set are available to expand the game. While I wish more decks were included in the base game, I understand that it’s not feasible unless you are looking at running a league or some other kind of competition. I’m happy that the option to get more decks is there.

1st and Goal captures the football experience better than any other football game out there. It allows for the possibility of each play being stuffed at the line of scrimmage even if the wrong defense is called, penalties occur, and those breakaway moments can happen if your roll is lucky enough. A few rules clarifications have been made, but a few questions did come up about them. Still, if you are a fan of football or want to help teach someone how the game is played, then 1st and Goal is worth a look.