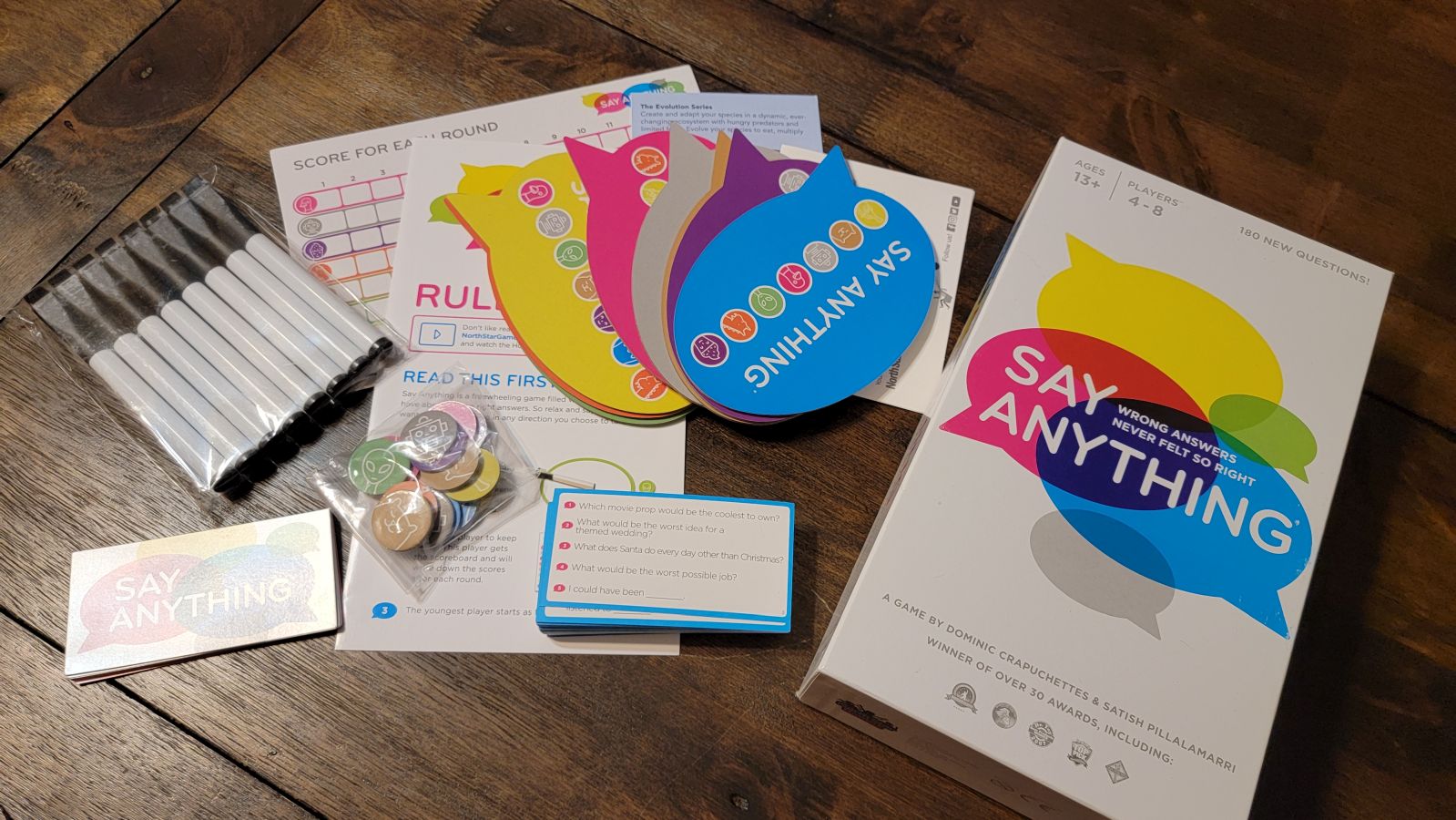 Party games are a dime a dozen. They are often easy to learn, accessible to all, and can be finished fairly quickly, but that doesn’t mean that they don’t fill a niche in the gaming landscape. Say Anything is one such party game, able to be played with 4 to 8 players, and typically taking only a half hour for a full game. With rules so simple anybody can pick it up and play immediately, Say Anything will almost certainly get party guests talking and works fantastic as an ice breaker. In short, it fulfills exactly what it sets out to do.

Set up is simple; players choose one of 8 colored dry erase boards, the two tokens which match that board’s color, and a dry erase pen. One player is designated as the score keeper and the youngest player will begin the game as the first judge. On each turn the judge will draw one card from the pile of 80 cards and read one of the five questions on that card out loud. All other players will then answer that question by writing on their dry erase board and laying the board in front of the judge. The judge will then secretly choose their favorite answer. Once the judge states that they have chosen, all players will then use their tokens to guess which answer the judge chose. Players can place one or both tokens on any answer, including their own. Once the guessing is complete the judge states their answer and points are tallied by the score keeper. The player who wrote the judge’s favorite answer receives one point, any player who placed a token on the judge’s favorite answer receives one point per token they placed, and the judge gets one point for each token placed on their favorite answer. The maximum points which can be awarded each round are three. The person directly to the left of the judge now becomes judge and the entire process repeats, with play continuing for 12 rounds. Once all 12 rounds are completed the score is tallied and the player with the highest score wins. 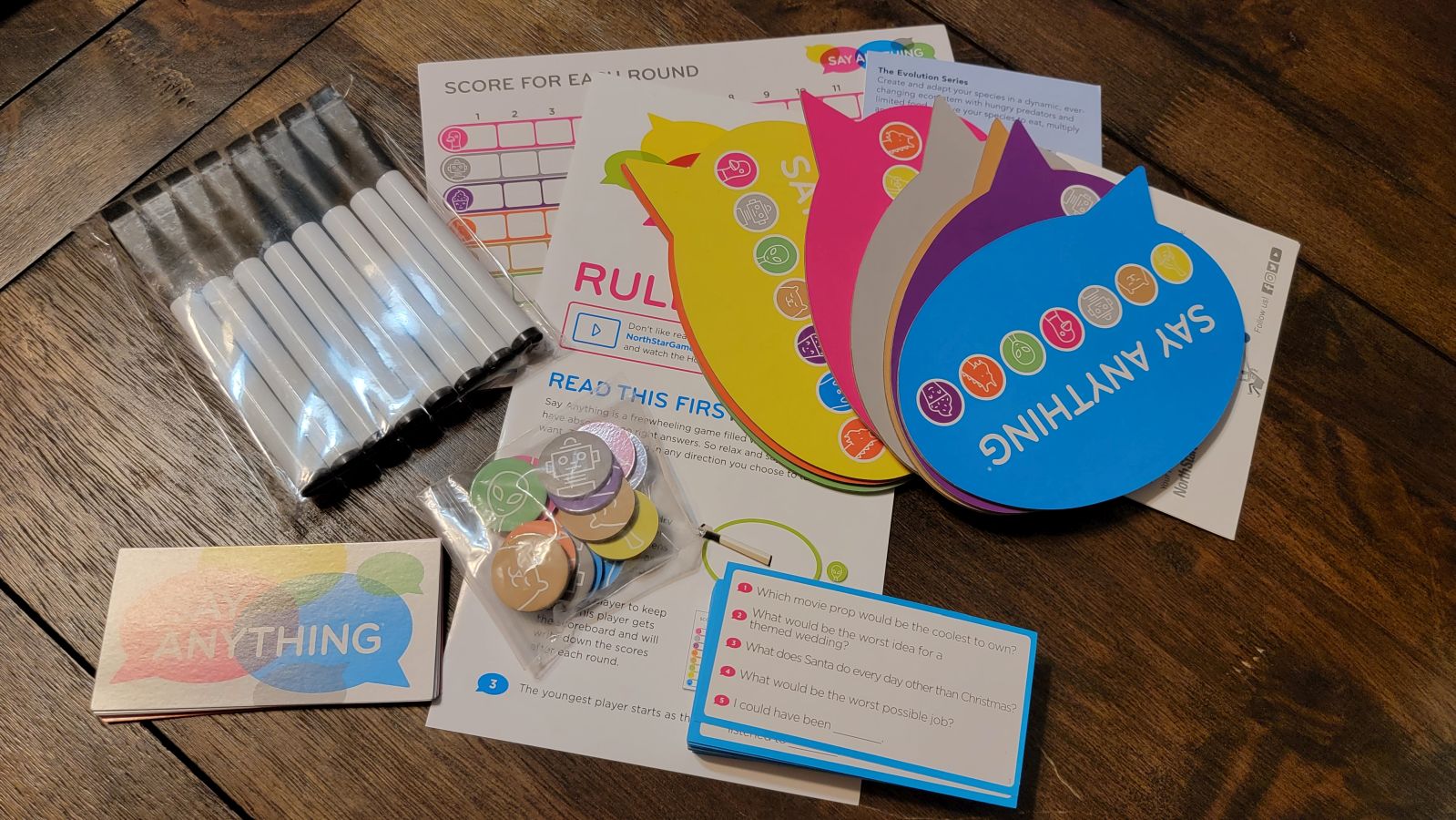 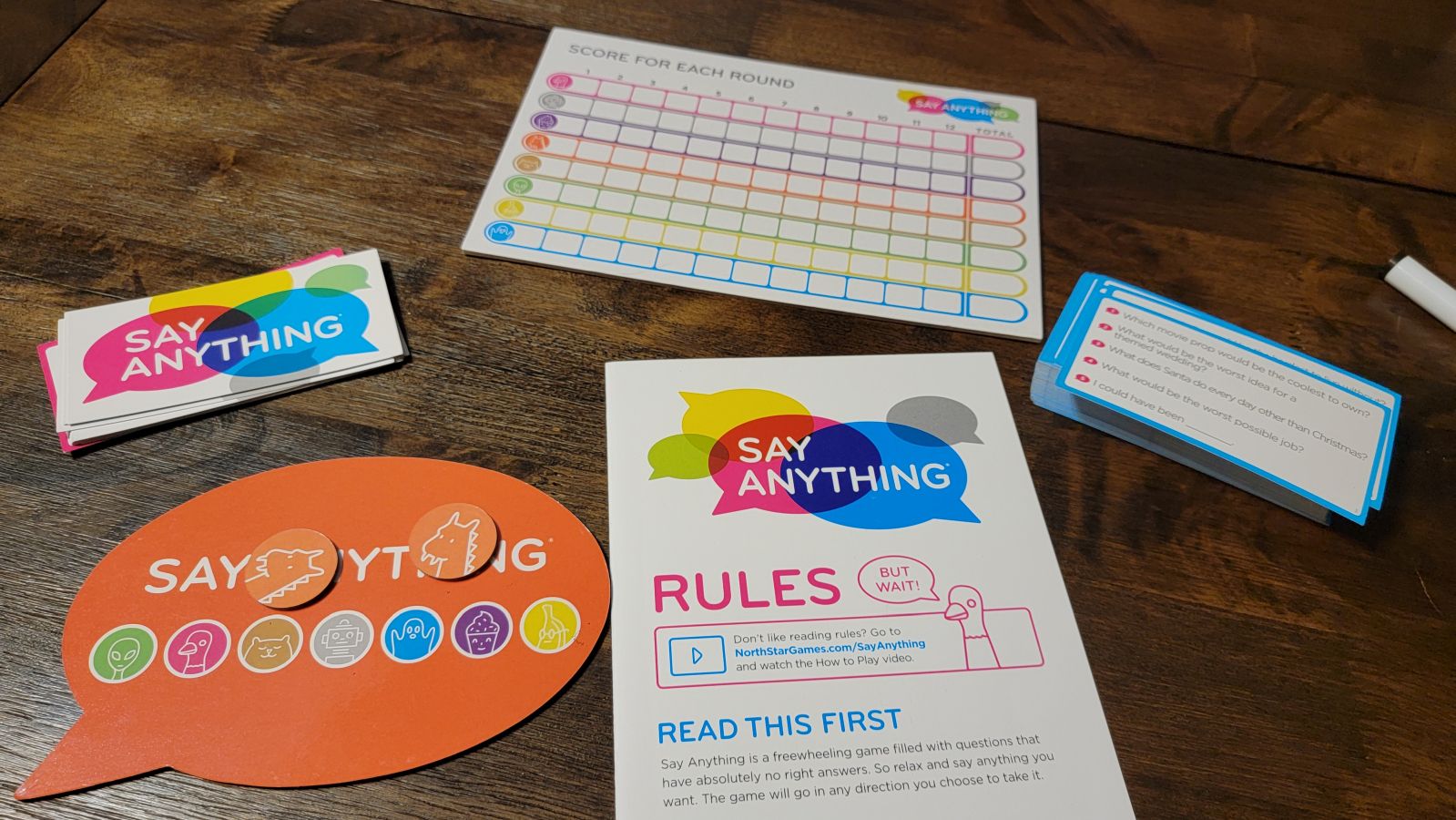 While simple, Say Anything mainly works because it gets people talking. Whether it is about the backstory to their answer, or what the question made them think of, my group of five spent more time joking about the questions and learning about the sometimes hilarious responses written then we did on the actual gameplay. Don’t get me wrong, that isn’t a knock on the game itself, in fact it is a compliment. Typically the only things I expect from a party game are for it to get the party talking and loosen everybody up, and Say Anything did exactly that.

The game works well because there are no wrong answers, and questions cover a broad range of topics that are meant to hopefully draw out funny answers. A few examples of the included questions are, “what’s the dumbest thing to say to your new mother-in-law,” “When’s the worst time to burst out laughing?” and “What illegal thing would be the most fun to do if it were legal?” I suppose you could even create your own questions if you wanted to, although there are 400 supplied questions. The fact that there is no stress involved makes playing Say Anything a breeze and helps to keep the mood high. If you don’t have an answer you can simply write anything you want, in the end it’s up to the judge to choose and who knows, even if you wrote gibberish they may still choose your answer. 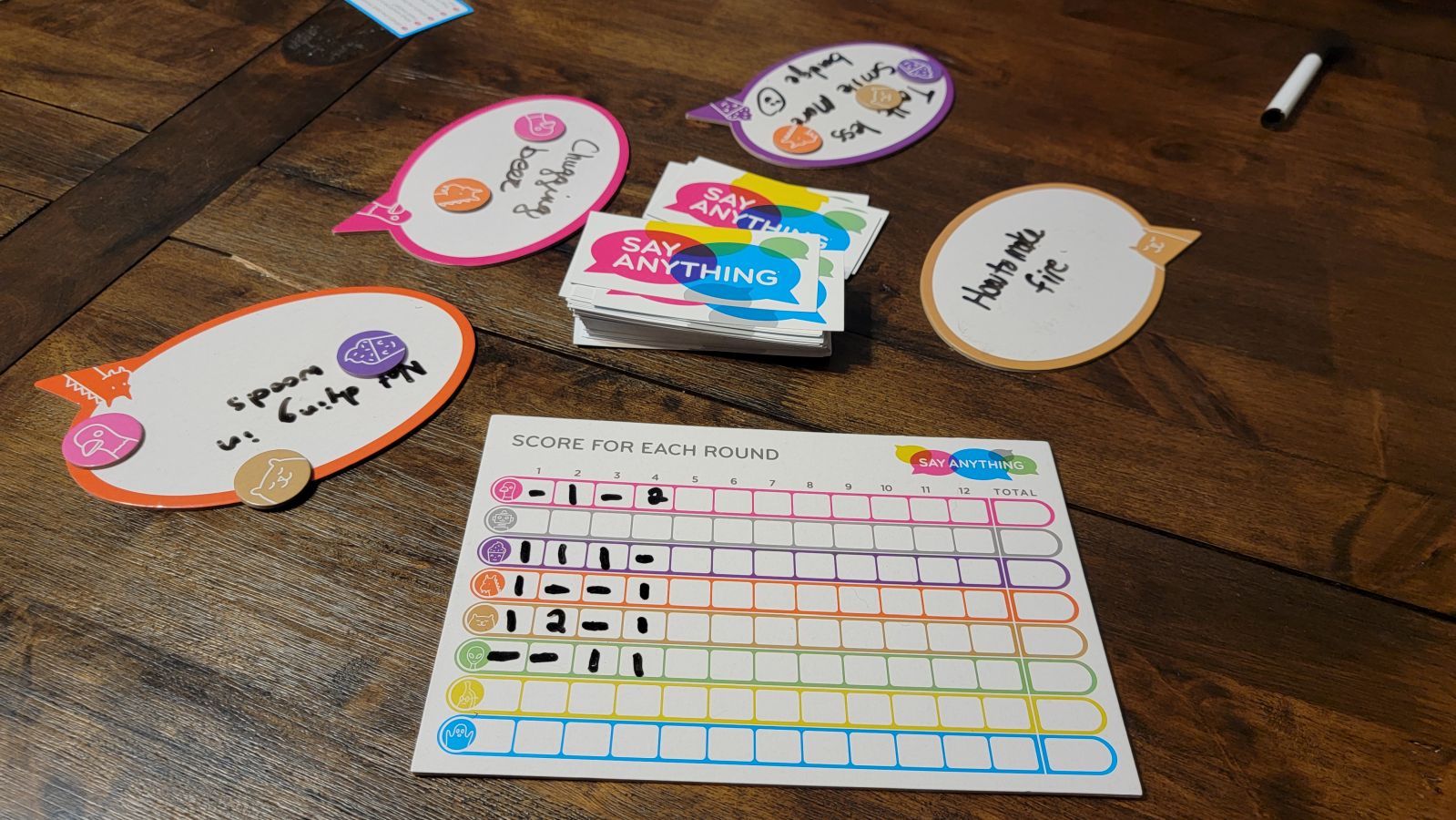 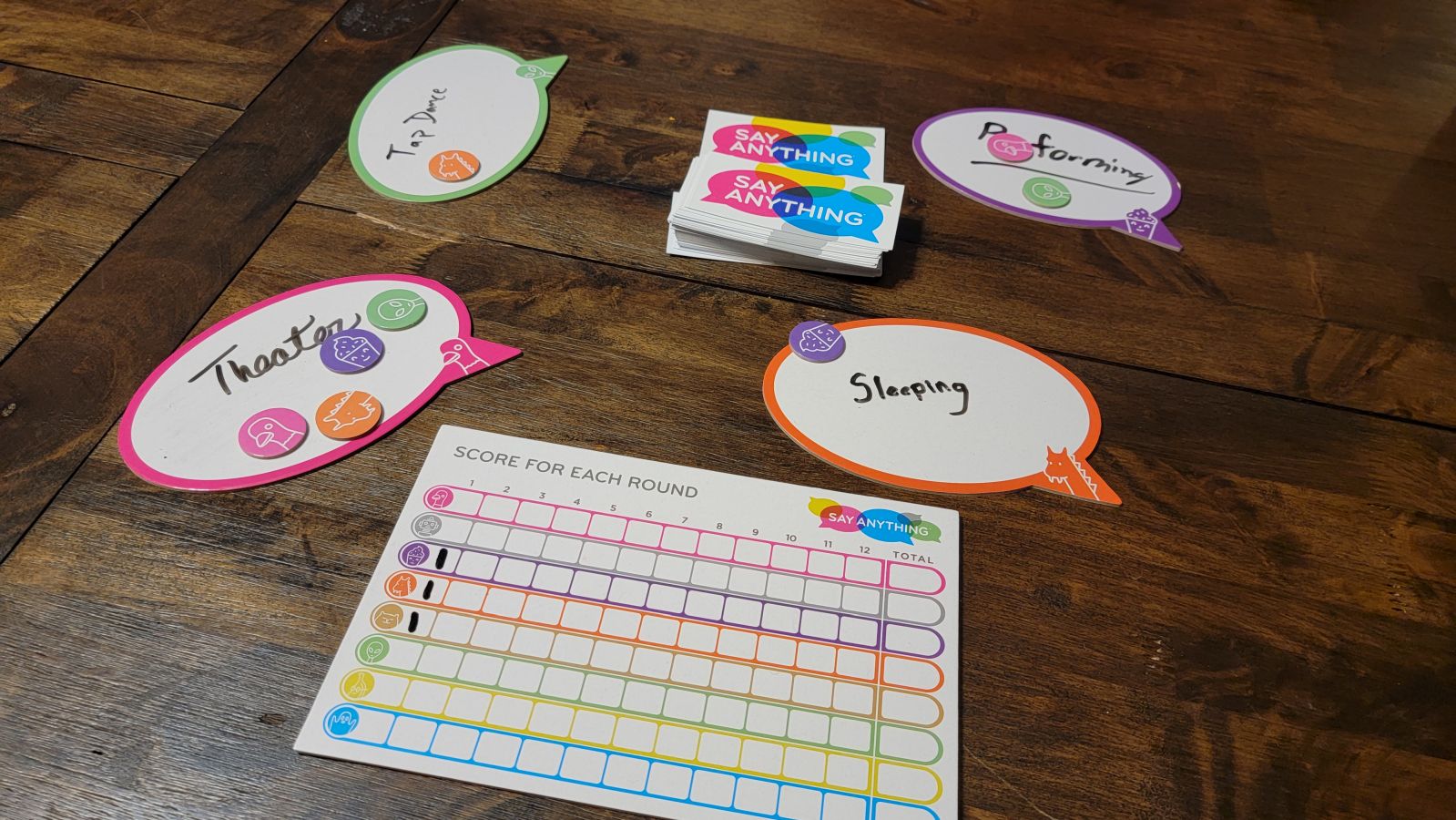 That’s really all there is to Say Anything. It is simple in concept, simple in execution, simple to play, and fun for a game or two a night. There’s no real strategy to the game and who wins ultimately comes down to the judges choices, but I’d wager that the point of the game is not to win, rather it’s the bonding which occurs throughout the playtime. While Say Anything may not be something you’d pull out at every party and will doubtfully be something played for hours on end, it ultimately serves its purpose as an easy to learn and play game for a large group, and there’s not much else I’d ask from it.

Say Anything serves as a great party game which can be enjoyed by nearly anybody. Easy to learn and play, players will be writing answers and joking within minutes of sitting down at a table. While there’s no strategy to it and no real answers, the game remains fun due to players learning the stories behind the answers they’ve written. With 400 questions included and only 12 questions asked per game, there’s enough in the box to keep players entertained for a long time.

Richard Allen is a freelance writer and contributing editor for various publications. When not writing for Gaming Trend you can find him covering theatre for Broadway World, movies and TV for Fandomize, or working on original stories. An avid retro gamer, he is overly obsessed with Dragon's Lair. Chat with him via @thricetheartist on Twitter and @richardallenwrites on Facebook and Instagram.
Related Articles: Say Anything, Tabletop
Share
Tweet
Share
Submit