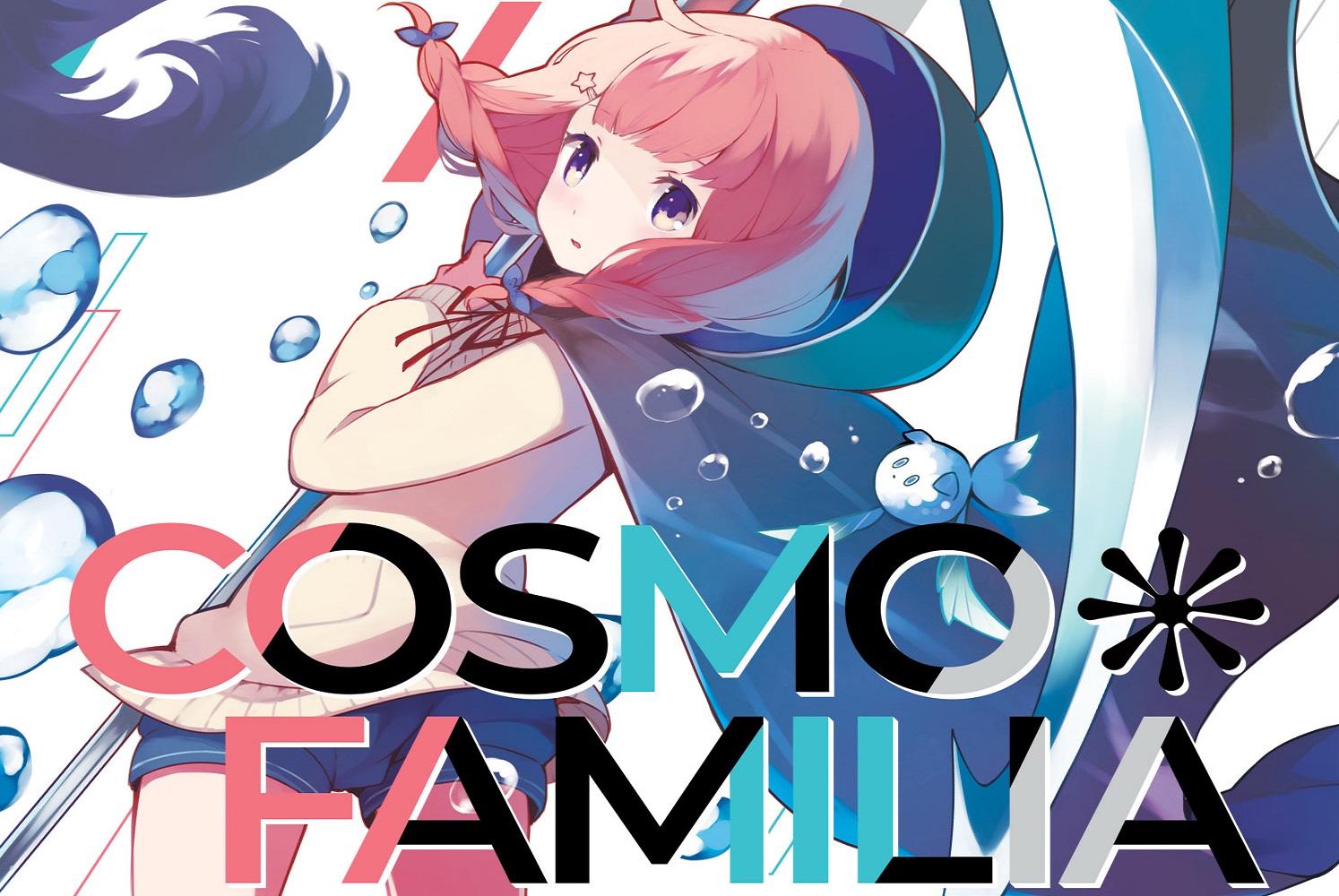 I love me some out of space thrills from time to time, and I’m opening up on reading more magical girl manga as a way to get out of my action-comedy manga comfort zone. While I’m mainly talking about Sailor Moon and Puella Magi Madoka Magica, Hanokage’s first installment of Cosmo Familia brings some familiar tropes of the genre but also does enough with it subversive elements to create a fun experience that picks up near the end of the volume. 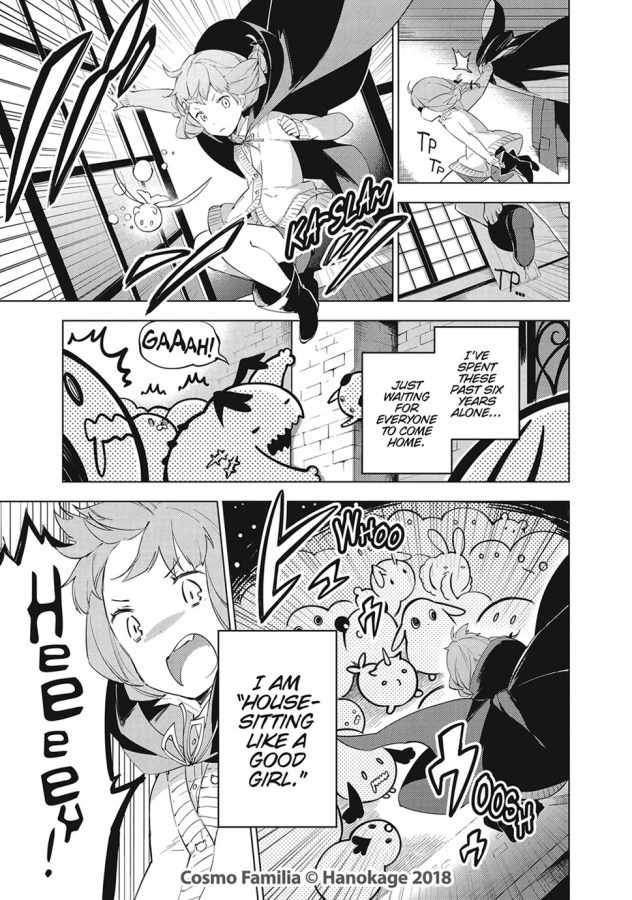 Ever since she was 10, Amakawa Alice has been abandoned due to an inexplicable absence from her mother. In her mother’s stead, Alice has to shoo away adorably destructive creatures known as Cosmofs in order to save her house and surrounding town from being pummeled into pieces. One day, she’s visited by members of the Intergalactic Police Force, who want to kill all of the Comsofs. Just as Alice is about to be cornered, a younger version of her mother appears and whisks her away to the past, but that’s only where the trouble starts.

If there’s one thing I love about Cosmo Familia, it’s the art style. It’s skillfully drawn with a balance between slice-of-life family drama and action, with the latter starting to pop up around the halfway mark. When I found out that Cosmo Familia would be handled by Puella Magi Madoka Magica’s manga artist Hanokage, I was excited to see how a manga with a lighthearted art style would be twisted into a dark sci-fi experience. Here, I wasn’t disappointed, as by the end of this volume, the stage is set as a transformation occurs with one of the antagonists. 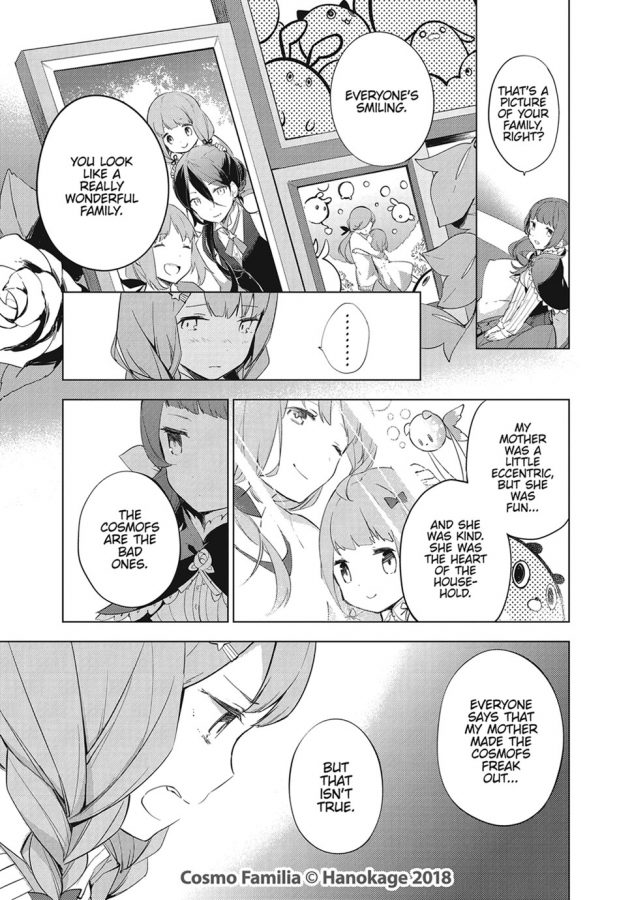 As for the cast of characters, they’re serviceable but can be generic at times. The main character Alice feels like the introverted and shy hero that’s only there because she has to be, while the Intergalactic Police Force fits the bad guy role well enough. It’s not until the very end when these character dynamics start to flesh out into more developed relationships, as Alice and her (younger) mother seem to have something sinister in their backstory, while Intergalactic Police Force Mina is reckless and becomes a bigger problem in the final pages.

Perhaps the biggest flaw in the first volume of this series is how slow the buildup is to get to the action. While it’s a parallel to Madoka’s pacing (as that particular series spends a few episodes to build a false comfort in viewers), I would have preferred that the main conflict be introduced sooner than the final chapter. While there is a small sense that something is wrong in Alice’s world, it’s not really until the end when it hits the fan. In contrast, Madoka’s first two episodes automatically clue the viewer in that this is going to be something of a special series and not to get your hopes up with it being a generic run-of-the-mill magical girl anime. That said, there’s enough in the introductory volume that interests me in future installments, and I want to see what happens to Alice and the Cosmofs as the battles continue. 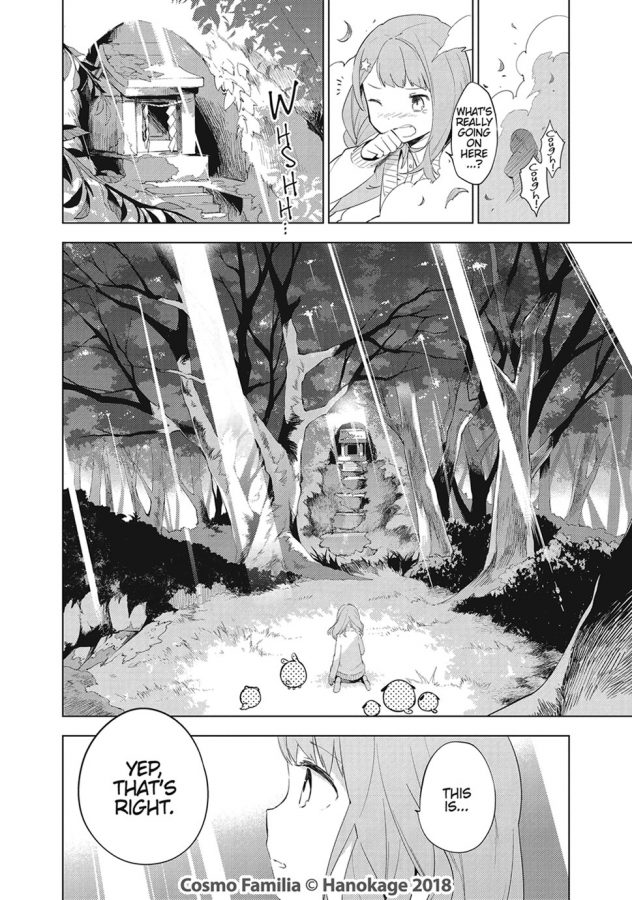 The first volume of Cosmo Familia might lack the subversive charm of Hanokage’s other works, but its art style more than makes up for it. Here’s to more thrilling battles in this interesting sci-fi setting.

Elisha Deogracias is an aspiring accountant by day, freelance writer by night. Before writing for Gaming Trend, he had a small gig on the now defunct Examiner. When not being a third wheel with his best friends on dates or yearning for some closure on Pushing Daisies, he's busy catching up on shonen manga and wacky rhythm games. Mains R.O.B. in Smash. Still doesn't know if he's a kid or a squid.
Related Articles: Beyond the Page, Cosmo Familia Volume 1
Share
Tweet
Share
Submit