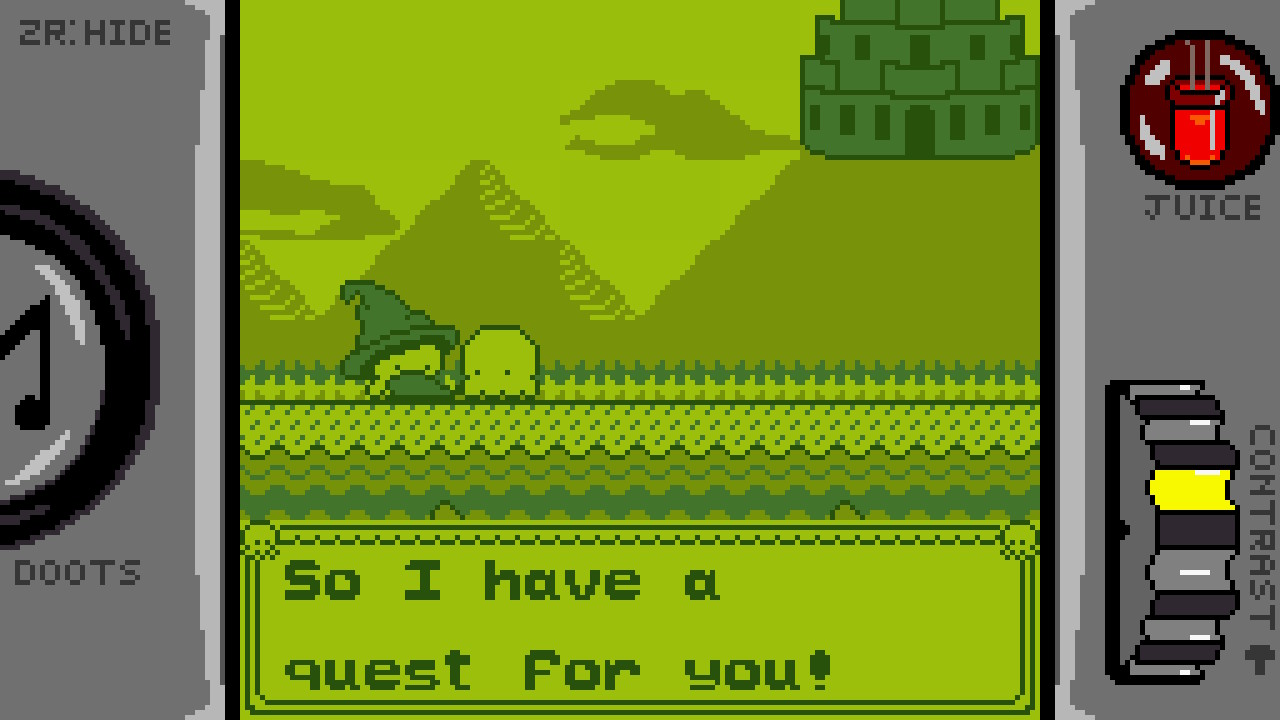 I like indie developers trying to constrain themselves with hardware restrictions of the old generation; attempting to create games based on the Genesis or NES era of technology is something that MegaCat Studios does well, and I do appreciate a good demake ala Mighty Gunvolt Burst. Squidlit Ink recently released its Game Boy-esque platformer Squidlit for the Nintendo Switch, and while it’s too short for its own good, the ideas presented make for a wonderful $1.99 game. 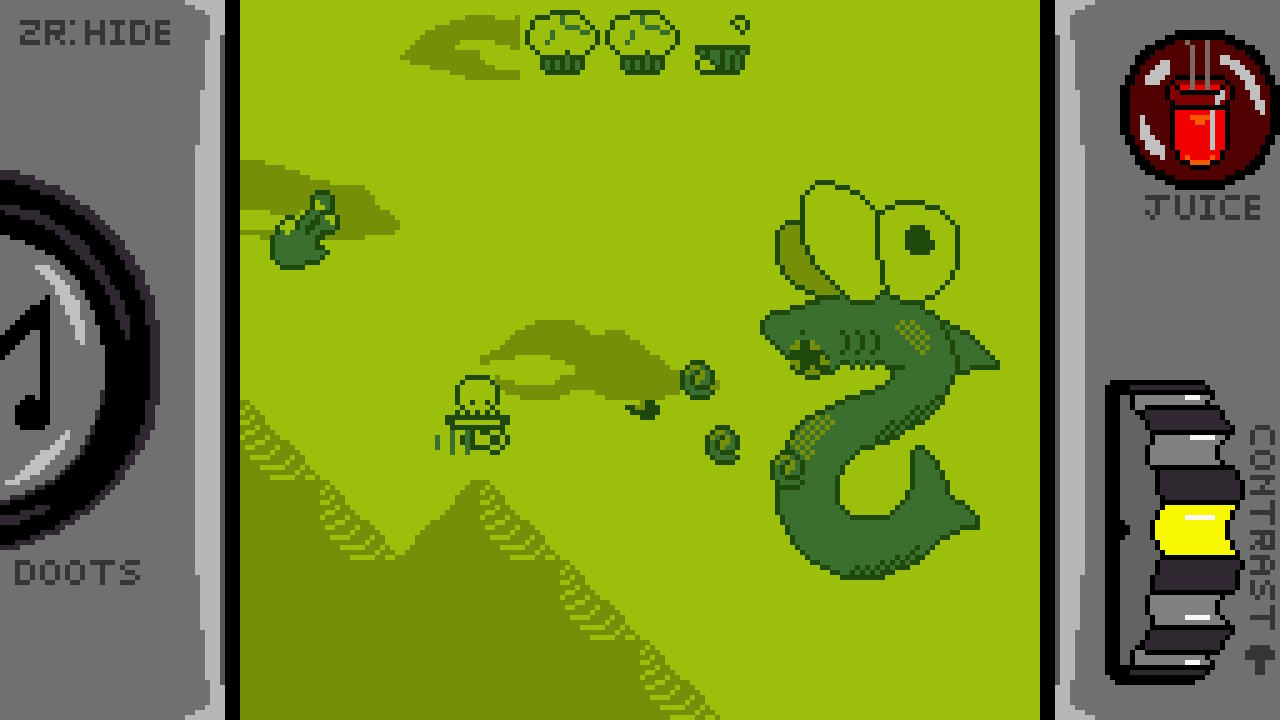 In Squidlit, you control a titular creature as you try to save the world from the evil Skwit Skwot (GOD EMPEROR), by traversing through a few worlds populated with enemies, bosses, and a healthy dose of muffins. The game is wearing its Kirby’s Dream Land inspirations on its sleeves, and the presentation shows: The developers made it a point to make sure that the game followed the conventions of a Game Boy title, from making no more than 40 sprites visible at a time and utilizing LSDJ to create the chiptune soundtrack. To compensate for the square resolution, there’s also a little retro border that you can toggle on and off, which also controls the contrast settings in case you want to increase or decrease your line of sight.

One thing I commend the game for is how much personality is present here; while brief, each of the Squidlit characters have some lines in their dialogue that represents who they are. From a baker who gives the player Squidlit muffins as health to the nefarious Skwit Skwot (GOD EMPEROR), who makes it a point to say that every time the villain is introduced, it’s a cheeky fun story that I was surprised by. The sprites and enemies display charm, and it does legitimately feel like you could put this on a Game Boy thanks to the simple yet enthralling mechanics and soundtrack. 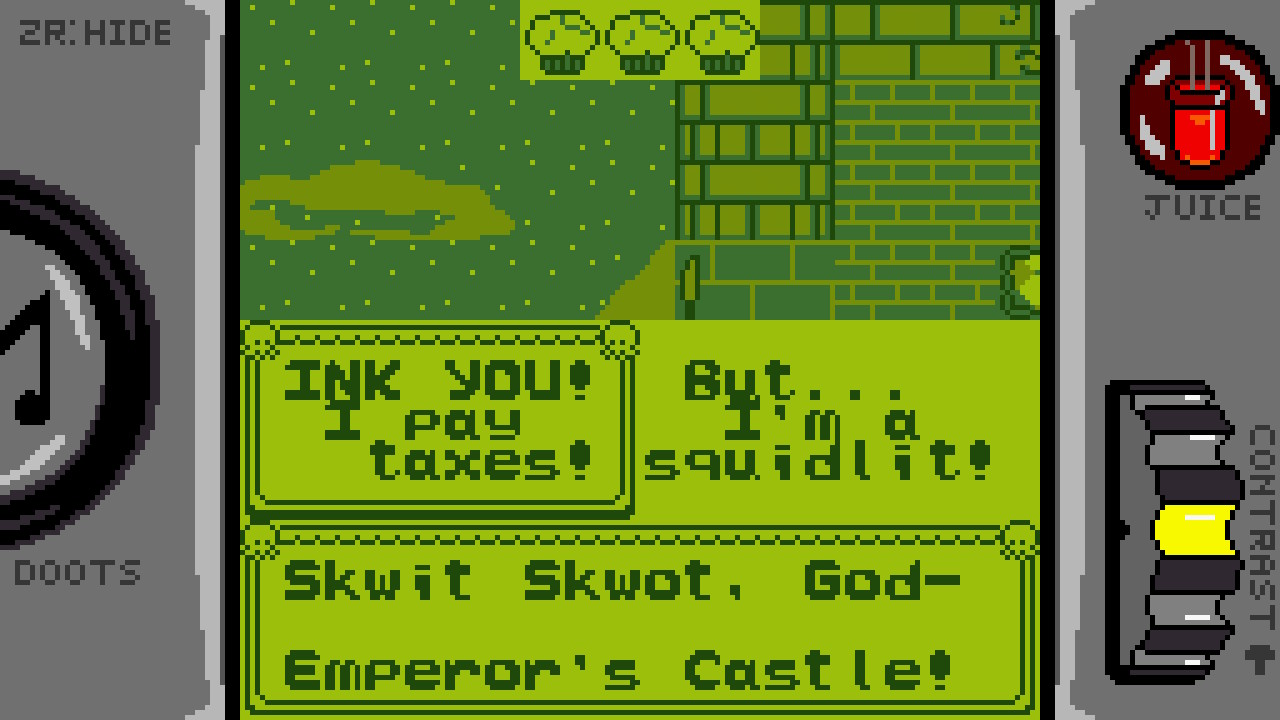 The gameplay is reminiscent of handheld platformers, and unlike previously reviewed titles Whipseey and the Lost Atlas and Save Me, Mr. Tako!, I had a great time controlling my character. The Squidlit has an ink ability that’s used to defeat enemies and gain a little air when jumping, and it’s used quite innovatively when facing the bosses. The whole game is easy overall (due to the prevalence of unlimited retries and an abundance of health pickups), but the bosses are memorable. Shoutout to the book boss, who you have to go inside of in order to riddle it with ink stains as it tries to skewer you in the arena. At the very least, there wasn’t one instance where I had to fight with the controls, which automatically puts this a step above the competition. Releasing ink is simple and satisfying, and I did enjoy travelling through the different lands with this technique. 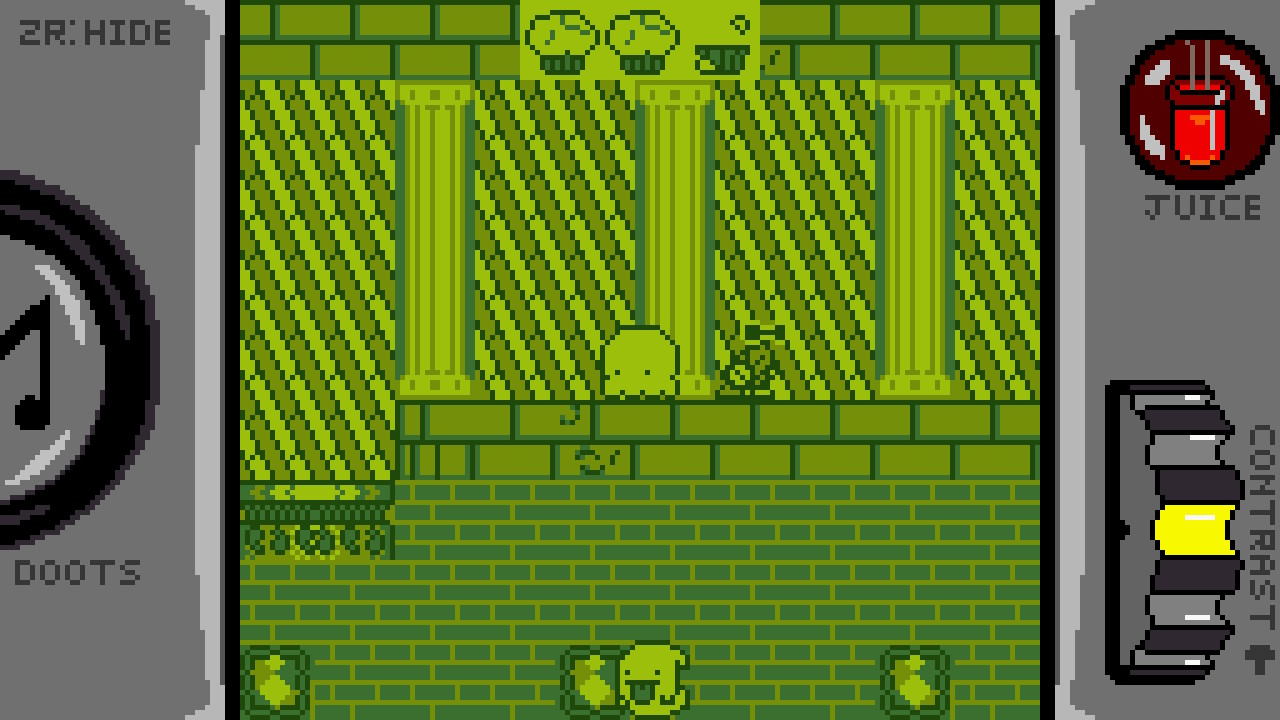 In a sense, Squidlit seems to have emulated the first Kirby’s Dream Land quite well, to the point where it probably attracted that game’s short length too. This is really the only sticking point that keeps me from wholeheartedly recommending it; I was a bit confused as to why the game didn’t support save data. (Perhaps that’s another convention of the Game Boy aesthetic, since a lot of older portable titles relied on a password system to get you by. At the very least, you’ll have to sit through this in one go, though the game does last under a half an hour. Normally, I would be concerned about the length (as I was with Whipseey), but the full price is only two bucks, and I feel like I would want to replay this every so often because it’s just so darn charming.

While the length will no doubt be a problem for those hankering for the Game Boy platformer days, Squidlit does enough with what’s given to create a lovely homage to the beloved handheld games of the 90s, featuring a charming personality and fun presentation.

Elisha Deogracias is an aspiring accountant by day, freelance writer by night. Before writing for Gaming Trend, he had a small gig on the now defunct Examiner. When not being a third wheel with his best friends on dates or yearning for some closure on Pushing Daisies, he's busy catching up on shonen manga and wacky rhythm games. Mains R.O.B. in Smash. Still doesn't know if he's a kid or a squid.
Related Articles: Indies, Squidlit
Share
Tweet
Share
Submit