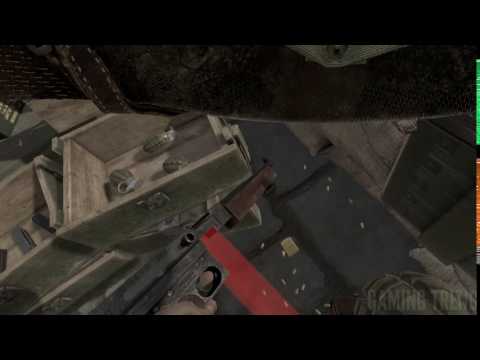 The HTC Vive has had its fair share of decent shooters from smaller developers, but I was excited to see what one sponsored by the company would look like. Fantahorn Studios, an internal company, was tasked with creating a shooter that would showcase the platform for new headset owners without tripping over the nausea problems of locomotion.

Front Defense takes place in World War II, casting the player as a soldier charged with holding the line against a seemingly-endless wave of enemy soldiers and vehicles. Unfortunately for you, your only line of defense is a load of Army-issue drab brown sandbags, a score of military weaponry, and all the ammo you can use.

Front Defense uses real military hardware, but it’s how the game uses it that makes it different. Most VR shooters ask the player to simply drop their hands to their sides to reload. Front Defense expects real-world hand motions to reload instead. That means pulling the magazine from your submachine gun, pulling a magazine from the left side of your belt, and loading it into the open magazine well. It means loading a rocket into an old stovepipe-style rear port of the M1 bazooka. It means pulling the pin on your grenades with your teeth (yeah, you can use your hands, but that’s not nearly as fun) and lobbing them towards the enemy. It’s not quite what you’d call ‘realistic’, but it’s certainly more immersive than just dropping your arms to your waist. Light mounted machine guns like the M2 and even what looks like a Browning M1919 anti-aircraft weapon are also available in your bunker, though these don’t require any sort of lock and load, but instead having to watch for barrel overheat.

In most VR games, the player is supplied with some sort of aiming reticle, laser sights, or a crosshair that floats in midair. Since this is a more realistic shooter, developer Fantahorn Studios instead expects you to use the iron sights on your weapon to hit your targets. Your submachine gun is the exception, using some sort of red dot laser sight (from the future!) to help take down distant foes.

Front Defense is still more arcade shooter than simulation. Enemies run towards you, take cover, and lob grenades at your bunker, their health bars prominently displayed over their heads if you shoot them. Vehicles roar into the same positions every time, though that doesn’t make them less dangerous. It’s good, simple fun that never takes itself too seriously, and it will likely jolt a laugh out of you the first time a German soldier, screaming, rushes up and stabs you in your virtual face.

Not unlike the movie tie-in John Wick Chronicles (our review here), Front Defense is played from a stationary position, letting the player move around the VR sandbags in a roughly 2-by-2 meter or 3-by-3 meter space. This means zero nausea issues, as there is no locomotion to contend with.

At 6.2GB in size, and also just like John Wick, Front Defense is only three levels long. That said, I spent 118 minutes on my first mission before I finally beat it. The first mission has you defending a street with two entrances – one to your left, and another directly ahead. German soldiers pour in, take up elevated positions, and flank you as you try to stop them from destroying your bunker. While the enemies are not randomized, there’s enough of them to keep you busy, so expect to die more than a few times before you figure out what you need to do to win the day.

Airstrikes are a fun interaction.

In the second level, your team has set up shop in front of a church, which you are expected to defend. Your enemies are holed up in the interior of the city and in the building across the courtyard. The wider space also gives plenty of room for the massive Panzerkampfwagen Tiger tanks to creak in front of the church, unleashing hell on your little sandbag defenses. Thankfully, the Army has seen fit to issue you a backpack radio to order airstrikes based on grid coordinates. Those are hardly unlimited, however, leaving you in the lurch with only the bazooka to take out the next few.

The third level, and easily the most difficult, has your brigade defending what looks like a train depot in a small hamburg. While the other two levels had minimal flanking, this final level is a brutal assault from all sides, as well as the skies. Ju 87 (a.k.a. Stuka dive bombers) roar overhead, causing mass havoc and confusion as they take out nearby Deuce and a half trucks, emplacements, and more. The plate steel on the M1919 can protect you from the front, but enemies take up elevated positions in a nearby factory on the right, and they begin to stack up on the bridge over the rail yard on the left. This multiplies dramatically when the Sonderkraftfahrzeug (armored personnel carriers) show up and start popping shots at your bunker. It also pulls the curtain back on the primary issue with Front Defense – your fellow soldiers.

Across all three levels, you are flanked on both sides by fellow soldiers. Unfortunately, despite them calling out where snipers might be hiding in nearby buildings, or runners with rocket launchers, they really never do anything to stop them. They are mere ghosts, leaving all of the heavy lifting for you. It means you really can’t rely on them to stop even the most obvious threats. It breaks immersion a bit, and it causes some frustrations in the third level as the number of troops feels overwhelming, moreso when flanking.

My only other complaint comes from one of Front Defense’s best features – the grenade. While it’s awesome to have frags at your disposal, no matter how hard you throw them, they always feel short on range in the first and second level. It’d be great if the team would extend the range, as it would add a little bit more firepower to the arsenal.

Unlike other level-based VR shooters, you can complete a level to unlock the next, or it’ll unlock as you rack up enough points to do so. This is a better method, as it allows you to move on and at least experience the other two levels, even if you are an awful shot.

Beyond the levels, there is also a score attack leaderboard. Going back and cutting down soldiers with your submachine gun will earn you more points than doing the same thing with your mounted M1919 machine gun, and far more than indiscriminate fire like that of the bazooka. It’s always fun to go back and try out new tactics, and then comparing the results with your friends.

Front Defense is good arcade fun, raising the action to flat-out frantic with a more active reloading system than most VR shooters. Lobbing grenades, calling in airstrikes, and using the mounted weapons are the real highlights – I just wish my fellow Army members were a bit more present. Here’s to hoping that a little arcade action will spur deeper experiences from HTC’s internal teams.

Ron Burke is the Editor in Chief for Gaming Trend. Currently living in Fort Worth, Texas, Ron is an old-school gamer who enjoys CRPGs, action/adventure, platformers, music games, and has recently gotten into tabletop gaming. Ron is also a fourth degree black belt, with a Master's rank in Matsumura Seito Shōrin-ryū, Moo Duk Kwan Tang Soo Do, Universal Tang Soo Do Alliance, and International Tang Soo Do Federation. He also holds ranks in several other styles in his search to be a well-rounded fighter. Ron has been married to Gaming Trend Editor, Laura Burke, for 21 years. They have three dogs - Pazuzu (Irish Terrier), Atë, and Calliope (both Australian Kelpie/Pit Bull mixes).
Related Articles: Front Defense, VR
Share
Tweet
Share
Submit