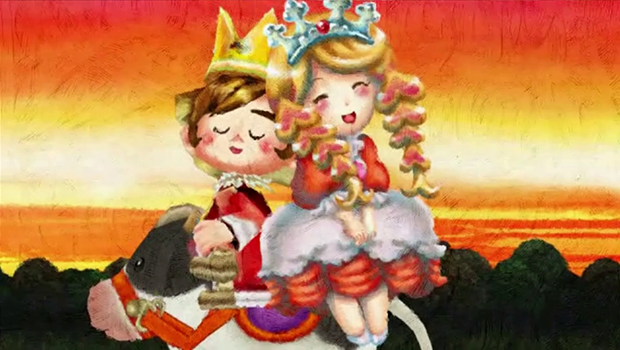 Little King’s Story is coming to Steam with upgraded HD graphics. Originally released on the Nintendo Wii in 2009, Little King’s Story is a cute role-playing life simulation strategy game where you take on the role of Corobo, a timid young boy who finds a magical crown and is proclaimed the true king of the land. Endowed with the magic crown’s ability to charm anyone into following any order, it is up to you to assign jobs to the lazy citizens of the tiny kingdom of Alpoko, to vanquish evil monsters, and to expand your kingdom. The game has simple mechanics, fun and addictive gameplay, and a charming little storyline.

Not much has changed from the original Wii release, which isn’t an entirely bad thing. While the graphics are not overly stunning or cutting edge, the HD upgrades keep the game from feeling dated or clunky. The opening and cut scenes of Little King’s Story are beautifully animated; the colors and textures themselves move and shift, giving these sequences the feel of a moving work of pastel art. Everything about this game oozes cute; your character is adorable, your citizens fall in love, the townsfolk send you fan mail where they gush about how much they love living in your kingdom — even the rats in this game are adorable.

The battling system is pretty simple, and reminiscent of the Pikmin games. You recruit citizens to your Royal Guard by speaking to them, then you generally just point your troops in a direction and let them charge to either victory or death. Citizens of Corobo’s empire are incredibly weak at first, but more jobs open up as you expand your kingdom, allowing your adoring public to become more capable. Part of the strategy of the game is knowing which job classes are best at accomplishing certain tasks. For example, soldiers are very good at killing monsters, but they are also very clumsy; if you send a soldier to help your carpenter build a bridge, the solder can actually undo all the progress your carpenter has made. While charging headlong into battle is one way to win a fight, a wise king will invest in training a group of hunters who can fire arrows from a distance, weakening your enemies and saving some of your soldier’s precious hitpoints.

The targeting system has not been upgraded or revamped, which I found to be my main source of frustration in Little King’s Story. To send your civilians into battle, or to accomplish a task, you pull a trigger to activate a line. Using the thumbstick, you position Corobo so this line points at a target, and then press A to send your civilians charging to work or to battle. It sounds simple enough, but the thumbstick is not terribly precise. When enemies spawn on top of or right beside a hole you can excavate, it is all too easy to target the hole instead of the monster. Your loyal populace will gladly slave away, following your command to dig, ignoring the monsters who will gleefully take the opportunity to beat your people to death.

While the plot of the game may feel overly simple early on, Little King’s Story uses clever storytelling to bring the narrative full circle, wrapping up the game in a very satisfying way. The characters themselves are a bit one-dimensional, and really only exist to help the game and overall story advance. You start out with the straightforward goal of world domination, but you eventually find that the land is in danger, and it is your duty as king to save it. The future of your people rests on your ability to uncover the source of the terrifying earthquakes which threaten to destroy the kingdom of Alpoko.

Anyone up for frog legs?

I did experience one crash and a few glitches while playing Little King’s Story, but I expect these will be patched up pretty quickly. The game has cheerful music, the graphics are bright, and the world is full of unique and interesting areas to be explored. While this game doesn’t bring anything revolutionary to the table, it sends you on a delightful adventure in a kingdom filled with demon-winged zombie cows, possessed scarecrows, and pickle-throwing baddies. Easy to play and easy to love, I genuinely enjoyed returning to the kingdom of Alpoko in Little King’s Story.

Little King's Story is a delightful RPG with around 30 hours of gameplay. With a cheerful soundtrack, imaginative landscapes, and improved graphics, this re-release can stand shoulder to shoulder with similar games on the market. The gameplay is fun, addictive, and pretty forgiving. You'll find plenty to do in this game, from digging for treasure, to collecting taxes, to completing quests, to battling bosses and other baddies. Fans of the series will no doubt enjoy getting lost in the colorful kingdom of Alpoko once again.