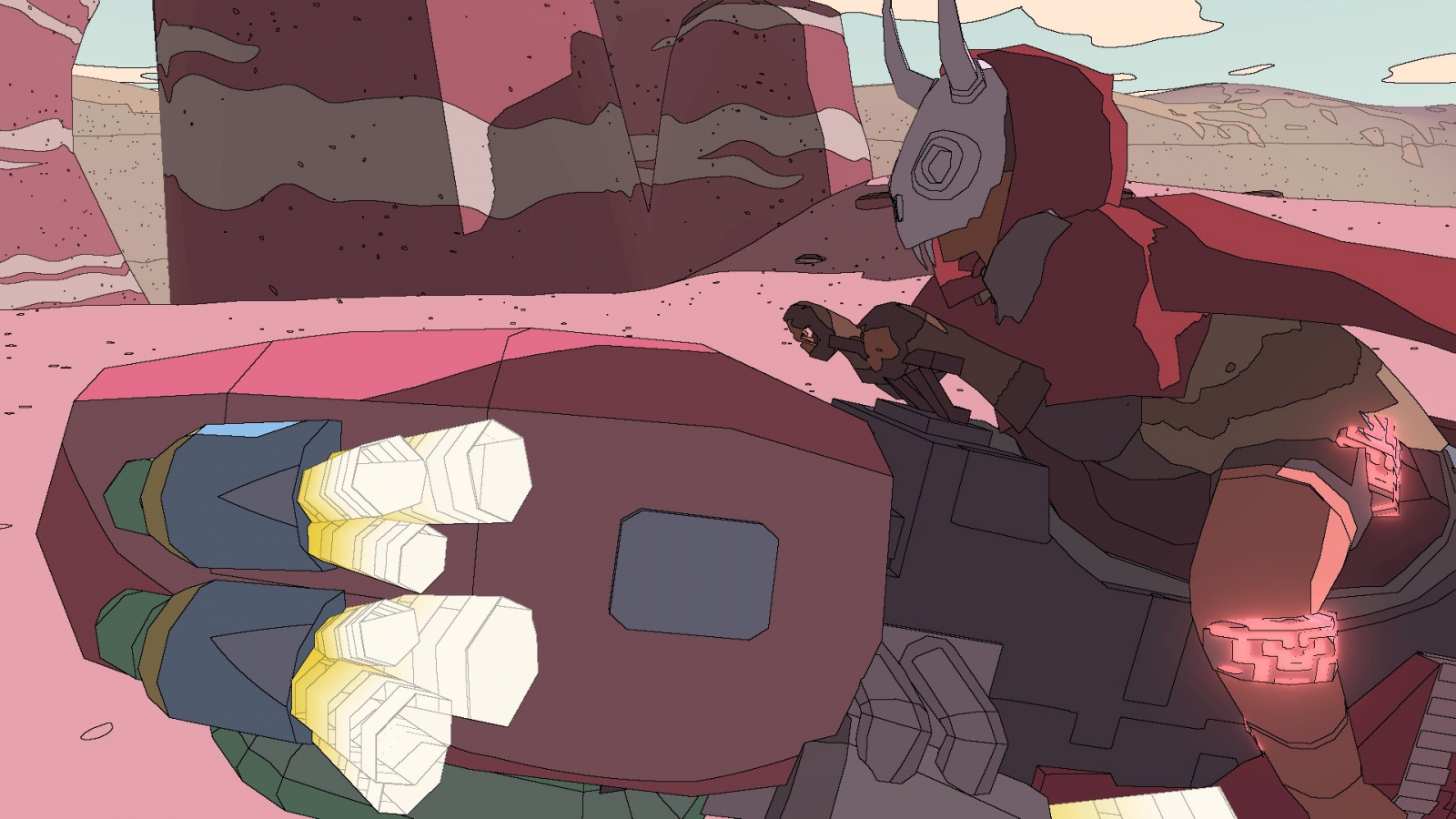 When the children of Midden come of age, they embark on a journey called the Gliding. They travel the world collecting masks, which each represent a different path in life they can choose at the end of their Gliding. In an Ibex village, a child named Sable is about to head out into the world and discover herself. With only her trusty hoverbike, Simoon, for company, what sights will she see, what kinds of people will she meet, and what mask will she choose?

Sable feels like a game made specifically for me. It has a gorgeous visual style, contemplative atmosphere, and exploration focused gameplay. Once you finish the admittedly lengthy tutorial, you’re essentially free to go wherever you want and do whatever you want until you return home and finish the game. There’s a lot to see and do in Sable, but it’s pretty much all optional, a game made entirely of side quests, which everyone knows is always the best part of any game. With that in mind, this makes it difficult to talk about Sable without spoiling some things. This game is going to be compared a lot to Breath of the Wild and I think it’s best to go in blind, so if you liked that game definitely pick this one up.

Sable has several tools at her disposal to aid in her exploration of Midden. For traveling the vast desert planet, her hoverbike Simoon can be customized to increase her speed and acceleration using parts purchased from vendors. Early on, you’ll also be given a stone which allows you to hover gently to the ground in a bubble by holding A after jumping. Finally, Sable can climb pretty much anything as long as she has enough stamina. There are quite a few locations to discover that will add markers to your map, but some that don’t, so you’ll have to keep your eyes open and be curious about the world around you if you want to find everything.

The game isn’t entirely directionless though. You can pull out a compass by holding LB, which will show you any markers you’ve placed and your currently tracked quest. To actually get new masks, you need to complete tasks for people dotted around the map (everyone knows Gliders LOVE menial tasks). These quests can be anything from collecting and selling scrap metal, exploring crashed spaceships, or simply meeting up with someone in multiple locations over the course of your journey. Every quest is unique and explores different aspects of the game, like racing on Simoon or climbing the tallest mountains just because you can. Completing quests will usually reward you with a badge, and once you have three of a single type you can create a mask in a certain tent located in most settlements. (Masks and other pieces of clothing don’t do anything gameplay wise, so feel free to wear whatever you want.) After you get one mask and check your mail, you can finish the game at any time. 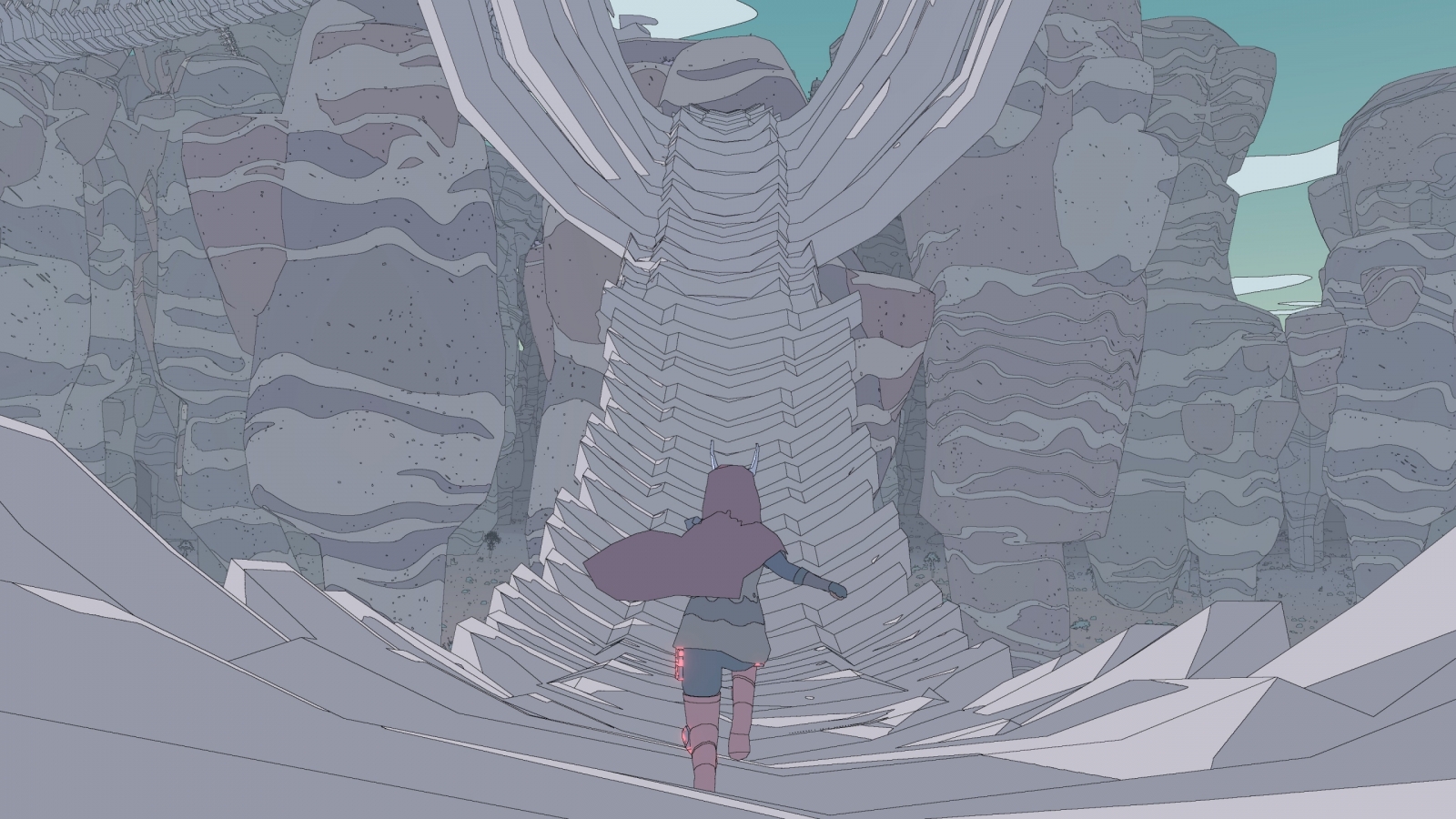 Even so, you probably won’t want to do that. There’s a ton to see and do in Midden, and it would be a shame to miss out on so much of it by only following the main quest. I got almost every mask in the game and finished just about every quest I came across, but I still didn’t want the adventure to end. As a coming of age story, becoming the master of your surroundings through increasing your max stamina and upgrading your bike makes you feel more ready for the adult-hood that is ending your Gliding, but you still don’t want to give up the freedom of childhood until you’ve seen everything it has to offer. This is one of the best connections of gameplay and theming that I have ever seen, and I think Glider by Japanese Breakfast sums it up best.

While I adore how freeform Sable is, there are times where it can feel a bit too directionless. While many quests have markers you can follow and you can purchase a map of each region by finding a cartographer, some quests do not and those cartographers can be a pain to find. The two quests in the game I didn’t finish both involve collectables hidden around the map, with no direction whatsoever as to where to find them. For example, in the racing quest I finished all six and collected their tokens, but had no idea where to turn them in. The other quest is much more longform and important, as it involves you collecting Chums from all around the world and giving them to the Chum Queen who will increase your maximum stamina. That’s essential for reaching some areas later on, but there’s no radar or anything to find these creatures; you’re meant to just spot them and collect them. I liked this initially, because it allowed me to explore at my leisure with no obligations, but once I had explored all of Midden I just had to wander around if I wanted to 100% the game. To be clear, I still want to do just that but some sort of upgrade to help me find Chums would have been greatly appreciated. 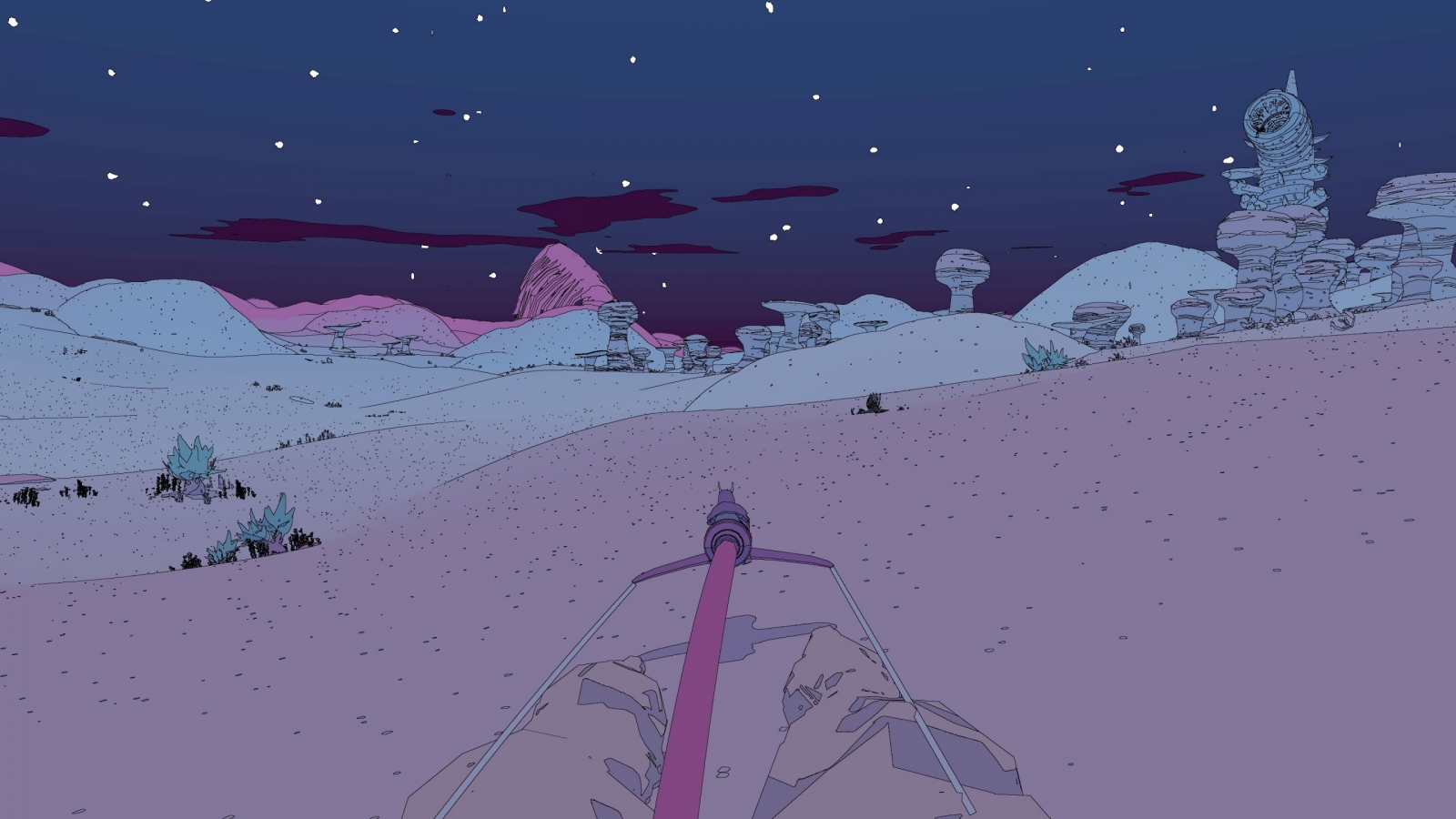 Going back to the Cartographers, you’ll sometimes be able to spot them by looking for their telltale balloon ships in the sky, sometimes being the operative word here. Given that you have a telescope to mark locations in the distance (which is a little weird to use, but you get used to it) and the Cartographers always being high up, you’re probably supposed to visit them early on in your exploration of a region. However, oftentimes they were the last thing I found because they can be very difficult to spot in the distance. Part of this is due to them being hidden by weird angles, and another part is because of the game’s draw distance. Many of the issues with it are pre-release glitches that the devs know about, such as stuttering while on the bike and details only loading in when you’re really close, but Sable is kind of a technical mess in other aspects.

I played Sable on my PC, which is decently beefy with a 3060 Ti graphics card, 16 gigs of RAM, and an AMD Ryzen 7 3700X 8-Core Processor, but the game rarely reached 60 fps – usually hovering around 40 or 50 depending on where I was in the world (after a patch just before launch, the game now stays much closer to 60 but still dips pretty frequently). Now, the game is intended to run at 30 to emphasize art style and animation, which mimics 2D animated films, but when using that option I still experienced frequent stutters and screen tearing. According to my tests, even the most intense areas were only using less than half of my computer’s power so I’m not sure what the problem could be aside from poor optimization. While I never got stuck or anything in my playthrough, I had to restart the game more than a few times because menus wouldn’t respond properly to my controller (which is the intended input method) or a UI element got stuck on screen. There is also a persistent fog which I imagine is supposed to mask the pop-in, but it’s way too far out to hide anything and, on particularly flat areas of the desert, you’ll see big chunks of the map load in ahead of you. 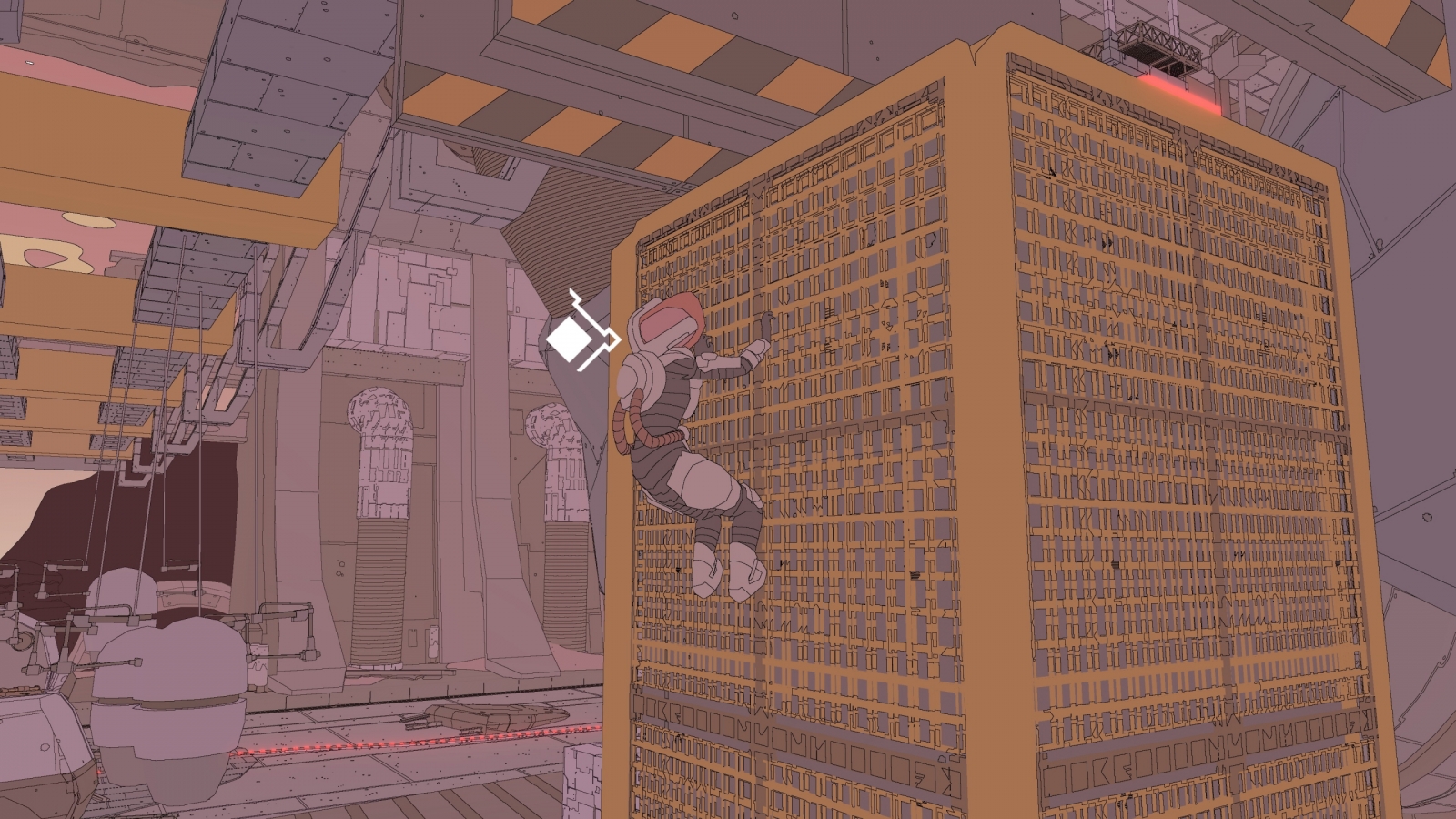 Speaking of the fog, Sable is a very colorful game but will occasionally use a single color for some areas. Despite the clear, black outlines of every character and object, this can make it difficult to see or perceive depth, especially at night. It works well in some places, like the lower areas of the lightning crystal plateau or in the mask making tent, but when it rears its head in some places like caves I had trouble making some jumps or figuring out what I needed to do to solve a puzzle. Most of the game is filled with incredible, vibrant colors though, so I wish this technique was used a little less often.

Technical issues and difficulty completing some quests aside (apparently the cartographers also have badges they can give you?!?), Sable is an absolutely incredible game you need to play. The world is vast and filled with secrets to find, puzzles to solve, things to collect, structures to climb, and people to help. I simply didn’t want this adventure to end, but I had to write this review at some point because you need to know just how good Sable is. Shadeworks has created an immersive world with a fascinating culture and history that I can’t get enough of. Even with the performance problems and issues with the menus or the camera freaking out occasionally, Sable is still well worth playing and one of the best games this year.

Sable is high on the list of game of the year contenders in one jam packed with them. It’s a gorgeous, immersive coming of age story that happens organically and at your own pace - you can see as much or as little of the game as you like. While it certainly has its share of issues, Midden is just a place you have to visit.

David is the kind of person to wear his heart on his sleeve. He can find positives in anything, like this is a person who loved Star Fox Zero to death. You’ll see him playing all kinds of games: AAAs, Indies, game jam games, games of all genres, and writing about them! Here. On this website. When not writing or playing games, you can find David making music, games, or enjoying a good book. David’s favorite games include NieR: Automata, Mother 3, and Gravity Rush.
Related Articles: Indies, Sable
Share
Tweet
Share
Submit