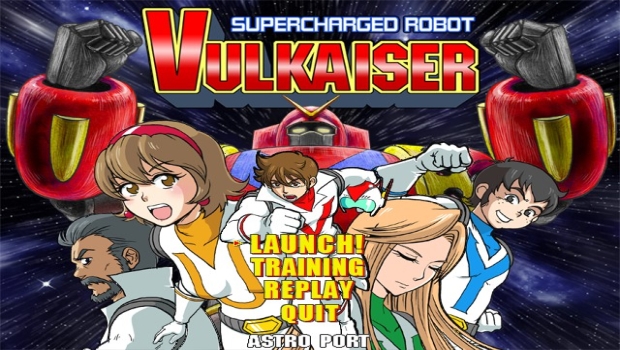 Supercharged Robot VULKAISER is at its best when playing off Saturday morning cartoon tropes and humor. Some Voltron, some Gundam, mix in some “All Your Base”-esque dialogue, and that’s a winning formula. Below the hood, though, VULKAISER feels like a skin painted onto a game we’ve seen many times before.

The aesthetic is very reminiscent of early anime like Voltron.

Set in a world where 1970’s Earth is being invaded by aliens, and you’re part of a team called VULKAISER that pilots the only giant robot that can stop the invasion. There’s not really much more of a story here, but just enough to set up a “why” and get to the gameplay part.

VULKAISER plays like a standard side-scrolling bullet-hell shoot-em-up. You dodge incoming fire while unleashing your own, and you have a charge bar you fill up by shooting. As you progress through the level, you’ll have a moment to add another teammate to your robot, gradually forming the titular VULKAISER and increasing in power. A boss appears at the end of the stage, which you have to kill. Simple and straightforward, VULKAISER is a fairly by-the-numbers shoot-em-up.

Dodging bullets is a little difficult, due to both your robot’s size and difficult-to-read hitboxes.

None of this, even the controls for doing so, is explained in any sort of tutorial area or briefing. There is no option for key rebinding or even seeing the key options, and your menu options are either to play straight through the story missions, train on them, or replay them, all chasing the highest score possible.

Difficulty ramps up quickly in VULKAISER, as enemies flood the screen in such large numbers that it gets hard to keep track of where your robot is. As you pick up team members and change into greater forms of VULKAISER, like Rocket Kaiser and Drill Kaiser, your own projectiles will add to the mass as well.

Upgrades give you new shots and specials, as well as an extra health bar.

It turns into a sea of flashing bullets and rockets that you desperately try to avoid, and that’s the standard for these games, but I would’ve like a bold outline or symbol on my robot just to help a little bit when the going gets rough.

The team members add nice variety to your robot’s weaponry, and also give you a new super that’s usually better than your base robot’s ability to shoot his fists at people. If you take enough damage to VULKAISER, though, you’ll lose your teammate and their upgrades, so dodging becomes even more important as the stages scroll further.

Bosses have cool designs, but no new mechanics beyond more bullets.

There’s six stages to tackle and high scores to chase, but Supercharged Robot VULKAISER is a fairly short title. Replayability will really only be there for those who love beating other’s high scores. I’d like to see online leaderboards added in the future to accommodate that, because right now, you’ll have to resort to Steam’s screenshot function to send those to friends.

VULKAISER is a short title with some good fun, but it doesn’t do anything new and it has some unnecessary obfuscation of just how to play the game, or what anything does. It took me a while to figure out there’s no pause, and to get out of a stage and go back to mission select I had to hit Escape, which closes the game at the main menu but boots you to the main menu if you’re in a game. Fun for a spell, but likely to fill out your library more than anything else.

VULKAISER is a nice distraction, but lacks any major step forward. Fun for a spell, but has the longevity of a coin-op arcade machine.