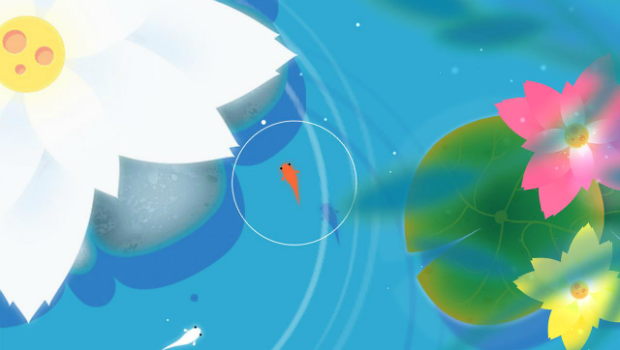 A little soul searching journey can clarify the murky darkness in your world, friend.  Clarification of the ills of your world comes in a gentle wave, and those very waves seek to both cleanse and calm.  Those are some very eternal truths, brother, or maybe I’ve just been playing too much Koi.  An adventure game at heart, Koi is a transcendental experiment in calmness as a gameplay mechanic.

In Koi, you play the part of a small koi fish who is witnessing strange disturbances in its ecosystem.  The game is very minimal and the first indication of that is with the story.  Very little is explained throughout, and with the fully silent interactions the entire game is really up to your interpretation.  A journey unfolds where your koi finds friends and attempts to clean a mess that is spreading throughout the ecosystem proper.

You swim about in a pond, and occasionally upstream, finding other colored koi fish and matching them up with a flower bud.  Pressing the O button results in a blooming of the flower, and once all of the flowers in an area are bloomed, a pathway presents itself to the next area.  Standing in your way is the elements of the waterway you’re currently travelling, and a highly violent group of blackened koi who attack you on sight.

The game offers a few varying challenges but the entire experience is very casual.  The calm nature of the game’s design and story play into each other and worked to put me in a very real state of calmness and tranquility.  Koi made me feel good, and it had the same calming effect on my nerves that an alcoholic beverage or light massage would have.

While mostly just a game of avoid the enemy and press the button, Koi does give the player a nice challenge when swimming upstream, where you have to use the surroundings to avoid being flushed back to the beginning of the level.  There are also some flowers that have to be found in pieces around the map.  There are collectable puzzle pieces and stars that serve as a completion bonus for each stage as well.

The best feature of Koi by far is the design.  The colors are bright and vibrant, and the pools of water contrasting with the rocks and other items in and around your waterway is artfully done and beautiful.  The fish in the pond have a sort of angelic quality to them, while the blackened koi’s eyes light up red and demonic in contrast.

The game is incredibly short, completeable in about 2-3 hours.  There is a little replay value in the admittedly viable “therapeutic” quality of the game, and the collectables will give you a few reasons to play through a few times more.  Overall, there isn’t any long term value in the game for playing sake.

Koi is peaceful, smart, and minimal, showing the cleansing journey of a special koi fish working against the odds and the forces of filth and darkness. Simple, but short, Koi is a refreshingly fun casual game that feels like a true video game without losing any of the casual qualities that make up the genre. If you’re an angry gamer, human, or just someone needing a break, Koi is worth a try.

Patrick Rost has been with Gaming Trend since 2013. At first focused on sports coverage, Patrick has gone on to cover a wide range of games and other products for the website. Outside of Gaming Trend, Patrick writes and records music, grinds perpetually in Elder Scrolls Online (PS4), and lives day to day with his two dogs, Bob and Stella.
Related Articles: Koi
Share
Tweet
Share
Submit