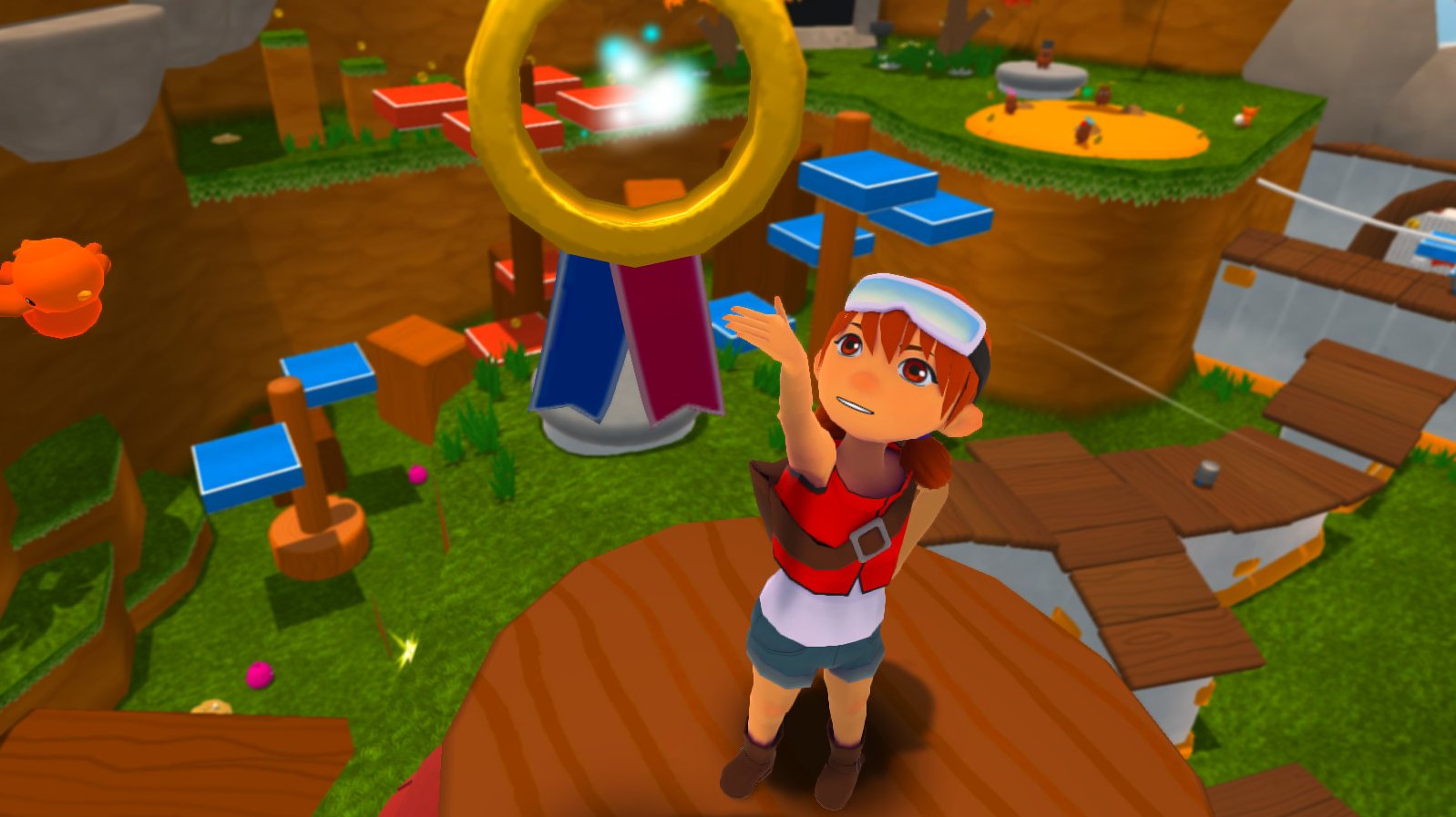 Last week, Poi: Explorer Edition, developed by Polykid and published by Alliance Digital Media, was released for the Nintendo Switch. You can find the trailer for it here. Some of you may be aware of this title already; Poi, the original, was released on Steam back in early February, and later on the PS4 and Xbox One. Being available on the Nintendo Switch brings Poi to a younger audience, and exclusive features to the Explorer Edition gives the game a bit of that Nintendo flare, as well as incentive for players to relive the experience of becoming master explorers.

But if you are coming from the original version, though, I’d hold on for a moment.

Though you probably are not expecting all that much anyways.

For everyone else, the game is about exploration and platforming, with everything else delegated to the bench. The story is excessively simple; you play as one of two orphans guided by a veteran adventurer on your quest to become master explorers, all while seeking and returning his lost treasures. Additional NPCs only serve as outlets for the game’s mechanics, be it various collectibles or unique challenges. The tutorial is painless, bringing you to the core gameplay almost instantly, and it’s followed by intuitive mechanics you’ve come to expect from your standard 3D Platformer.

The graphics are real easy on the eyes, I have to say.

Focusing on the running and jumping for a moment, the game plays like an homage to the defining 3D Platformers, such as Super Mario 64. To some players, this may be too obvious; reviews of Poi back in February fall short of accusing the game of plagiarism. But Poi is anything but a recreation of a plumber’s dream; coupled with its delightful music and smooth graphics, Poi sets out not to take the throne of 3D Platformers, but to simply relive the nostalgia of them, exploring fantastic worlds, fighting secret monsters, and pushing that childlike imagination to the limit with controls you mastered in your youth.

If you picked up this expecting a new, exciting twist on the 3D Platforming experience, you’ll be left disappointed. But if you’re looking for the childlike joy you used to experience as a kid, to unwind after a day of being an adult, Poi puts nothing in between you and that experience. Nothing has been more satisfying lately than diving off the airship to catch the wind in my parachute. It feels… right.

Hey kid. I dare you to jump.

The space the game makes for exploration isn’t always filled, though. There are only five proper zones the game returns you to, one being the short tutorial level. They’re great to explore, but there’s not enough of them. Challenges exist to fill that gap, but they’re mechanical exercises just handed to you, and not hidden in the zones themselves. The dialogue NPCs offer tend to be short and to the point, and any NPCs inside a zone tend to have charmless quips about their environment. Bosses are perhaps the weakest mechanical element of the game, being simple exercises in kicking the ball the right way, or jumping on their head some more. If the game fails you with its exploration, there isn’t much else to have.

Somehow, this is not a pirate. This is a merchant. You are not seeing the skull and crossbones flag, nor the dialogue from the old man that wonders if the merchant is friendly. I swear, this is deliberate, specifically to set me off. And it worked.

However, perhaps this void of content was intentional, at least for a different audience. The game rings nostalgia for an older crowd, but what dialogue exists seems geared for a younger one. The visuals and audio are charmingly simple, almost to the point of adorable. Your “Stars” analogue are your mentor’s lost medallions, but other NPCs always talk about rewarding you with a “shiny thing” they found. The game’s narrative lead of two young kids is left open ended so that a child can imprint themselves on the characters with ease. This child-focused directive was crystal clear when we were introduced to the helpful merchant, who, despite all visual cues otherwise, is not a pirate.

It’s almost a void designed to be filled with the player’s imagination, an asset the young have in excess, where an older crowd may have in short supply.

All in all, it plays like the best possible Baby’s First Platformer; if any given Mario game is the perceived limit of the genre, Poi is the measuring stick to make sure you’re doing it right. There are ways to improve the game, yes, but it gets right the basics, and absolute necessity, of this style of game: the feeling of exploration, and the mechanics of exploring.

But that’s also the game’s nail in the coffin, and why you probably shouldn’t buy Poi: Explorer Edition. The only circumstance where this wouldn’t be true is if you’re making a purchase for a young kid who has access to a Nintendo Switch; maybe a nephew who’s looking to have more to do than another Mario or Zelda title, or your own child who wants some time with your cool Switch toy every now and then. If you don’t have a kid you’re buying this for, it’s better for you to pick up the Steam version of the game.

Pictured above: a game for kids.

The game is fun, don’t get me wrong about that, but I had this nagging feeling throughout my playthrough that it’s missing just a bit too much. The gameplay didn’t diverge in any exciting way until the endgame sequence. The story never developed beyond the bones introduced in the opening, aside from “We found the thing!” Alternate collectibles were never challenging enough to make me think about the zones in a different way than the medallions did, and, again, the bosses were lackluster.

If this isn’t a gift, you’re buying this game for the mechanical nostalgia of exploration, to unwind, because there’s nothing about the game that’s tense otherwise. As an adult, this game is best as a supplement to another experience that’s always tense, be it another game that fails to unwind you, or life itself. And, as a supplement, it doesn’t justify the $30 price tag.

Poi: Explorer Edition does come with exclusives as advertised, but Joy-Con controls and handheld mode already have the premium cost of owning the Nintendo Switch in the first place, the soundtrack can be purchased off of Steam for $3 to $5 anyways, leaving only the digital artbook and special costumes and hats to make up the difference, which don’t change the gameplay in any fundamental way. There isn’t enough to the game for somebody who already owns another version of it to make the jump to Switch, and if you don’t already own it it’s hard to justify the price difference at face value when the Steam version is half the price.

The most frustrating challenge level in the entire game. You jump out of one snowball just to land in another.

And the generation that can make best use of the mobility of the game is the younger crowd anyways, which was the exception to this warning.

Perhaps this isn’t fair to the developers; ignorant of the work necessary to produce a title as clean as Poi; but, despite failing to Kickstart, Polykid released Poi on Steam for $15. It’s also available on PS4 and Xbox One at $20, which sets the baseline for a port. Because this review is about Poi: Explorer Edition, the gameplay is mechanically sound and gripping with nostalgia, but the lack of content outside of platforming itself despite exclusive features leaves the player wanting more. Unless you’re fine paying the premium to have it mobile for a couple hours a day, load up your Steam account and support the game there.

Poi, gripping with nostalgia, delivers standard 3D platforming in a adorable and relaxing way, putting nothing between you and the thrill of exploration, but this resolve to keep the game simple and to the point leaves it lacking in content. It's a fantastic way to unwind, though not much else. The exclusive content to the Explorer Edition adds little to the experience, and you're better off purchasing the title on Steam or another console, unless you want to pay the premium to have the option of mobility. A charming presentation coupled with dull interaction leaves this specific product mediocre.

Calvin Neill Trager is a roughly 25-year-old house husband supporting his high school sweetheart as they storm the weather far away from their hometown of Michigan and reside out in the country of Japan, who spends his free time between practicing Magic, working to Platinum all of Kingdom Hearts on PS4, and writing.
Related Articles: Indies, Poi: Explorer Edition
Share
Tweet
Share
Submit