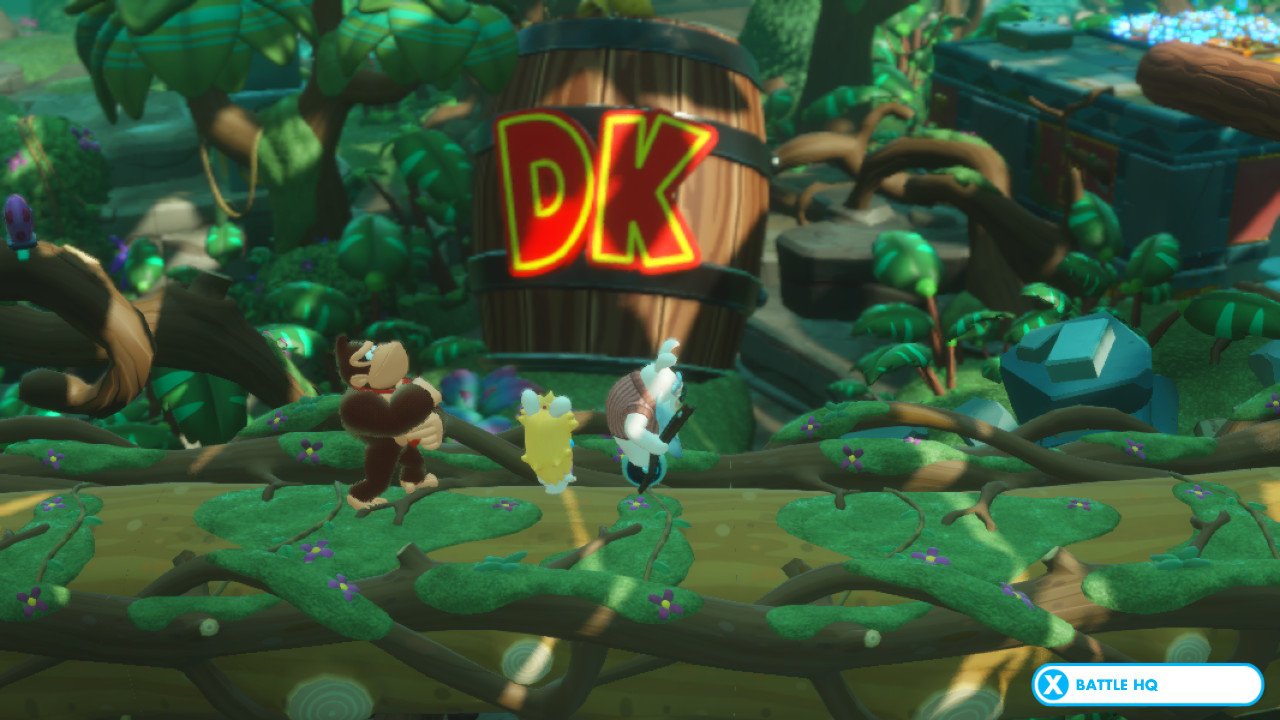 Mario + Rabbids Kingdom Battle’s new expansion, Donkey Kong Adventure, begins when Rabbid Donkey Kong causes the Time Washing Machine to malfunction, pulling himself and Rabbid Peach through to another world — which is a sentence that will make absolutely no sense if you haven’t played the original game. It made only marginally more sense to me, having stepped away from the original a few months ago. The important part is, far from the Mushroom Kingdom, Rabbid Peach has to team up with Donkey Kong and Rabbid Cranky Kong to lightheartedly annihilate scores of enemies led by Rabbid Donkey Kong and get back home.

If you played Mario + Rabbids Kingdom Battle, the expansion will offer very little to surprise you. Its retains the same XCOM-lite tactical gameplay of the original, but it gives you two new characters with fun abilities in a shorter, more constrained, in some ways tighter experience. This time around, you’re limited to only three characters, which may be disappointing if your favorite was left out, but to me it came as more of a relief. There’s no anxiety over which characters to bring into battle, no fiddling with party members and abilities to find the ideal combination. You just do the best you can with the characters you have.

Maybe that says more about my own stunted decision-making ability than it does about the game, but this focus has another practical advantage. Levels feel more finely tuned this time around. Stages don’t have to account for every conceivable party makeup, or the possibility that maybe you’ll just bring Luigi to wreck a carefully arranged enemy squad from a distance. With only one set of characters to work with, maps can be calibrated to be challenging for their specific skills and to offer opportunities to cause absolute mayhem by using them effectively. For one thing, there’s a lot more verticality this time around. Not that it was lacking in the original game, but the expansion redoubles its focus on platform-hopping.

Perhaps even more than the level design itself, Donkey Kong’s abilities really enable this acrobatic monkey business. Most levels features spots that act like ramps, allowing Donkey Kong to launch into the air and swings from floating dandelions to traverse huge swaths of the map. This alone lets him get the jump on enemies who may have seemed safely out of reach, but it’s not even the most interesting tool at his disposal. DK has the ability to pick up an ally, enemy, or cover block on the field and toss them like a football. You can use this to give allies an extra stomp attack, knock enemies into each other like billiards balls, or toss elemental blocks at your foes to set them ablaze or send them bouncing around the map. You can carry and use pipes or jump points at the same time, meaning you can rain down destruction on far-away enemies or cart your teammate to previously inaccessible locations. This works especially well when combined with Cranky Kong’s stomp, an area of effect attack that also freezes enemies.

Overall, the expansion seems to move faster than the base game. Not only do Donkey Kong’s tricks speed up the flow, area of effect attacks seem much more prominent, letting you deal with large groups of enemies at a time. Donkey Kong has a ground pound ability with a huge area of effect, and his primary attack wings a banana that can hit several enemies in a row. Cranky Kong can choose between attacking in a shotgun-style cone or a grenade-like square area. Combat also felt a tad easier this time around, partially due to the new attacks and the trimmed down enemy types — you won’t find any teleporting, life-draining, pain-in-the-neck ghosts here. The few boss battles don’t have much new to offer; they’re about on par with those in the original, which didn’t set a particularly high bar. There are, however, plenty of interesting environmental effects on the new maps. While fighting off Rabbids, you’ll dodge aerial bombardments, flame-spouting statutes, and other hazards.

Outside of combat, there are still plenty of puzzles to solve. They’re similar to those in the first game, with lots of blocks to push and switches to flip, but I found them more interesting this time around. You’ll also find a few much more clever puzzles guarding some of the game’s critical stages, and some timed challenges in hidden environments that were very reminiscent of Donkey Kong Country. I’m by no means a completionist, but I took the time to track down and solve every puzzle I could; they’re simple enough not to pull you away from the main game for long, but rewarding nonetheless.

Moving from battle to battle is still a matter of following mostly linear trails through lush backgrounds. The environments on display this time around feel more organic and less like elaborate theme park displays, with the last couple being particularly fun. They’re absolutely bursting with gorgeous details and visual jokes, even if some of the faux-Aztec trappings do follow the Nintendo tradition of tightrope walking the line between homage and appropriation. All of it is accompanied by a fantastic score by veteran composer Grant Kirkhope, who last touched the Donkey Kong franchise when he scored 1999’s Donkey Kong 64.

While Donkey Kong Adventure lacks the variety of Kingdom Battle, I finished with a higher opinion of it overall. It might not be a better game, but it’s a far more focused experience. The original was an excellent game and a great way to justify having bought a Switch just to play Breath of the Wild, but I ultimately grew tired of its formula. Instead of a sprawling, directionless journey, the expansion offers a quick 10-ish hour jaunt through a more coherent environment. If you didn’t enjoy the original game, this one almost certainly won’t change your mind, but it’s a great concentrated shot of everything that made Mario + Rabbids work against all odds in the first place.

A clever addition to Mario + Rabbids that plays to the original’s strengths without takings many risks. While Donkey Kong Adventure likely won’t win the game any new fans, it’s a treat for anyone who were left wanting more. The expansion trims some of the fat from the original, delivering a quick, focused game that quits while it’s ahead.

A committed indoor kid, Bryan moved from Pittsburgh to Los Angeles for a prettier landscape to ignore. They can be lured outside with promises of taco trucks and film festivals, and enjoy trawling through used book stores for works on the occult. Bryan has been gaming since the SNES era and is a sucker for good pixel art.
Related Articles: Mario + Rabbids Kingdom Battle Donkey Kong Adventure
Share
Tweet
Share
Submit