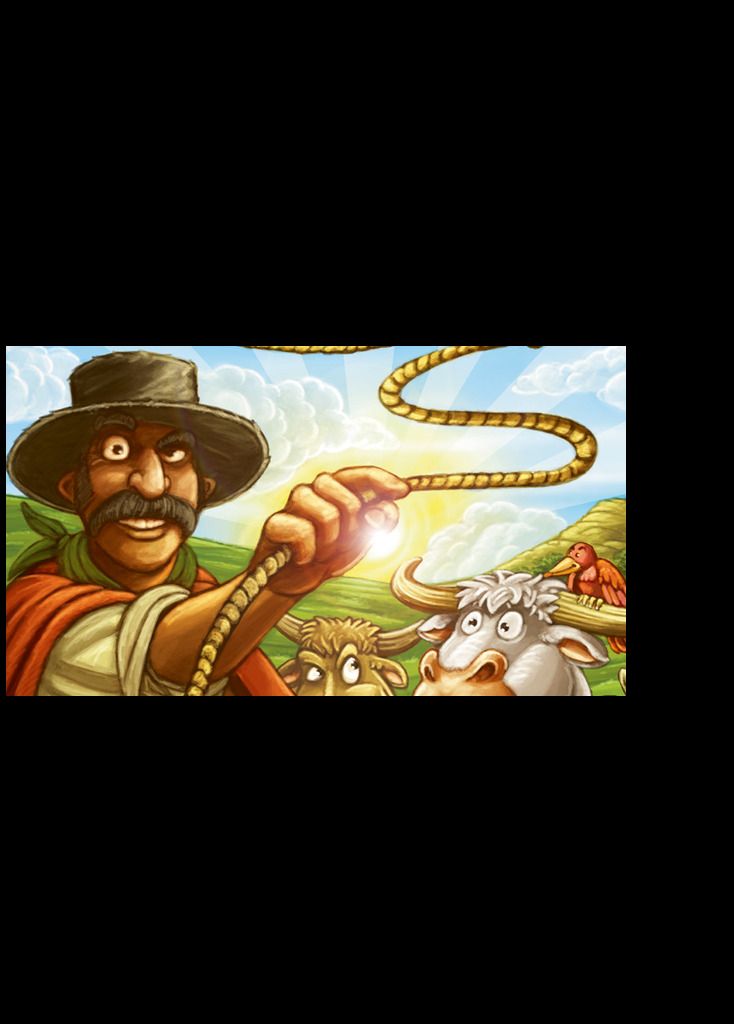 El Gaucho is a set collection game where players take on the role of cattle ranchers in Mexico sending out “gauchos” (basically “cowboy” in Spanish) to rope cattle and collect them into herds. The bigger and more impressive the herd, the higher it scores. Highest score wins! Like most set collection games, the primary goal of the game is straightforward and simple – collect cow tiles. And while set collection is about as basic and familiar as a mechanism can get, one of my favorite things about playing new games is experiencing new and original approaches to these basic mechanisms. In El Gaucho, designer Arve Fühler delivers a unique perspective on set collection with a refreshingly thematic angle that’s engaging, interesting, and fun. Using worker placement as the method to select the tiles you want, this game combines a number of familiar mechanisms to create a family style game that is accessible on multiple levels.  Fans of set collection and worker placement will both find a lot to like about El Gaucho.

El Gaucho is a lighthearted game but offers a surprisingly deep puzzle with many decision points and, for a set collection game, a very high level of player interaction. The most remarkable thing about El Gaucho is how well theme is woven into the fabric of the game itself. For me, theme works best when what you are actually doing references what you are pretending to do. El Gaucho really gets this right. Herding different breeds of cattle together is about as good a real life example of set collection as I can think of. And how do you get those cattle (tiles) to go where you want them to go? Send out your trusty gauchos (meeples) to round them up! Hey, that sounds a lot like worker placement!

Looks great on the table

Players start the game with their full complement of 7 gaucho meeples and three cattle tiles to start their herds. Then cattle tiles are dealt out onto the main board to form the pasture. After a first player is chosen, players place one of their gauchos onto one of the special action spaces in last to first order. The point is to have one action available ready to go on your first turn, which was a cool idea. I also appreciated the fact that the game started me off with my full workforce and didn’t force me to spend time acquiring additional workers. The game has a nice pace to it and slogging through the first couple rounds where the focus would certainly have been “get max workers now!” just doesn’t seem like it would have been as much fun.

To begin the game, the first player rolls all the dice into the rodeo, which is a small rectangle on the board that is physically fenced off by means of little cardboard fences. Each player will then in turn select two of the dice and use the faces shown to place gauchos on cattle tiles in the pasture and on various locations in the town. The dice, you see, are the horses that the gauchos need to ride out to their job (did I mention the theming in this game is charming?). At first glance the rodeo seems like a gimmick but it’s so simultaneously charming and useful that you really can’t help but smile at it. The fence looks fantastic on the table, really supports the theme and actually does an excellent job of corralling the horses (dice!). Again, more excellent theming in a game that is brimming with it.

When you use the dice to place gauchos on the cattle tile, you can place them either standing up or lying down. To place a gaucho standing, you need the number of pips on your dice equal to the large number on the cattle tile (you can combine dice for one placement). To place a gaucho lying down (“I’ll finish this later, ok boss?” Zzzzzz), you only need about half the pips. Another action on a subsequent turn, spending half the pips again, you can stand that same guy up. At the end of a round, if every cow in a single row has a gaucho on it, then all  standing  gauchos (and only the standing  gauchos) claim the tile. The lying down gauchos stay there to finish their nap I guess. With some careful placements you can a) grab the cows you want in the order you want, or b) perhaps force your opponent to take a cow he or she was not quite ready to take.

Since you have to put tiles at the end of your herd when you collect them, the trick to this game is acquiring your cattle in just the right order. The care and attention required to “herd” your cattle in the right order to get the maximum score was quite interesting and enjoyably thematic. Quite literally, you are “herding” the cattle tiles into your hand. Getting a long, high-scoring string of cattle tiles is a quite an accomplishment, making the sale of a truly impressive herd of cattle a satisfying prospect!

My little herds are growing!

Cattle are divided into five distinct breeds, each numbered 1 through 12, amounting to 60 total cattle tiles in the game. The object is to collect cattle tiles of a single breed into a “herd” in ascending or descending numerical order. Players can have multiple herds going at one time, but only one of each breed. When you collect a cattle tile, if it continues the number direction of the herd, you add it to the end of your row. If that tile that would be out of order, however, you must sell your herd and score the corresponding number of points. For example, say you’ve already collected tiles 1, 4, 8, and 10 of the tan breed. If you then collect the tan cattle numbered 6, that tile would be out of order and would trigger a sale of your herd. The scoring of each herd is very simple – highest number within the herd multiplied by the number of cattle tiles. So in this case the player would score 40 points (ten for highest numbered tile times four cards) and then the tan 6 would be remain as the first tile in a new tan herd.

In addition to the cattle tiles, there are various special action spaces in the game such as accessing a third die, stealing a cow from an opponent, and replacing an opponent’s lying down gaucho with your own standing gaucho. Short term planning is necessary here since actions are only used when you remove your gaucho from the spot, not when you place it. As you might expect with that rule, you must place and remove on separate turns. Once you place a gaucho on an action spot, they can sit there as long as you want. If you set things up right, you can pull off some impressive combos by picking up several gauchos in one turn. Of course if you’re loading up on the special action spaces, that means there fewer of your gauchos in the pasture, but this is exactly the kind of trade off that makes for fun and interesting decisions in a game like this.

The special action spaces are a great touch and add a lot of strategy while at the same time keeping the focus on the cows. I really appreciated how there was a spot for each player on each action. In general, I don’t mind the concept of blocking off actions from other players by taking their spot, but in this game that type of conflict takes place when players choose dice. Each special action needs a certain die result to place a gaucho there, so for example, if you take the last 4 pip die, then no one after you can place on the “steal cow” spot. I really enjoyed puzzling out what other players might do and having that weigh in on my own dice choices. Nevertheless, there are a lot of options in the game between all special action spots and the cattle tiles, which are effectively each action spots (action: get this cow). No matter what dice you get, you’ll have plenty of choices.

El Gaucho is a enjoyable family game with a lot of appeal for all levels of experience. The artwork is distinctive and lighthearted – each cow in a set is doing something slightly different and there’s a good amount of humor in the drawings. It looks great on the table and that little cardboard fencing around the dice rodeo is practically irresistible. The cattle ranching theme is fresh, well-implemented and accessible to seasoned hobby gamers and new gamers alike.