Often when discussing games people will focus on either the theme or the mechanisms included. Like that one time you played a game about saving the world from disease, or the game where players had hidden roles. Theme gives way to epic stories and vivid imagery, giving us a prompt for wild imaginations. Another vein is how the players interact with each other and with the game. These mechanisms exercise our brains in ways that simply reading a story cannot. Often times what is most enjoyable is when these two things complement each other to form an engaging and interesting game.

Unita is described as the continuing battle of the armies of Helvetia. The region has experienced political upheaval and the fractured forces are vying for power. Ultimately whoever gets to the Magic Gate first secures the fate of their people. Is this fantastical story a good basis for a game? Maybe. Is Unita that game? Let us find out.

Unita is about pushing your troops through a gauntlet; hopefully with life still left in them on the other side. There are four factions players control in Unita, the Nuns of Friburga, the Frogs of the Hexagone, the Engineers of GermanLand and The Men of Primitiva. Each faction has its own corresponding color, which ties in the force’s dice, cards, terrain tiles and paths on the board. Each die represents a troop, its number indicating its strength as well as end game value. The maximum value on the dice ranges from one to five, with each faction having the same distribution of dice.

The game board is a set of four spiraled paths that groups of dice will move along. Each player is assigned a specific path based on their faction, and their dice will only ever move on their path. At the start of the game players set up their armies on the outer edge of the spiral and during the game those forces march inwards to the center of the spiral. Each group of troops is made up of four dice, arranged in a square. Each army starts with four groups.

The main mechanic of Unita is the battling of armies. On their turn a player must make three move actions. Whenever a group of dice moves alongside an opponent’s group a battle occurs. The front line is the two dice closest to the opponent’s group. The two opposing dice from each front line are compared and the higher valued die wins the battle, damaging the opponent’s die. Damaged dice are bumped down one pip value, the lowest being zero. If there is ever a tie, the corresponding dice from the back line are compared instead. Once the battle is over, the front line dice switch position with the back line for each army. This compare, resolve, switch action takes place constantly, possibly happening twice if someone moves between two opponents.

Each faction also has three different terrain pieces that are quasi-randomly laid out along the paths. These terrain spots give bonuses to groups of troops that are on them. In addition, each faction has three special ability cards. Only one of these cards can be played during the course of the game. The unique cards vary from giving temporary boosts to long term tie breaking bonuses.

When a group of dice make it to the center of the spiral, they are removed from the board. Whatever value still remains on the dice is added to that player’s end game score. Once all dice have been moved off the board, totals are calculated, the strongest force wins.

As proudly displayed on the cover of the box, Unita is full of big, chunky, custom dice. The die faces are printed, not engraved; but as they are not rolled during the game, they should stand up to many plays. To aid in organization, the box comes with a rather useful insert. The rest of the components are up to par with the dice, all high quality.

The game board has some spectacular art. Each of the faction’s paths are incorporated in the art design, giving clear indication of which path a player is on. In addition to having some great art, the game board is double sided to support the full complement of players. Unfortunately the person who was in charge of the art was not the person to decide on the icons. They are language independent, but some of the icons are colored awkwardly, making them hard to understand.

It is obvious that the rules were not originally written in English and translated poorly. This leads to some ambiguity in the intention of the rules and very verbose sections to parse though. Once understood the rules are straightforward to teach.

Unita is a particularly hard game to describe. This may have to do with it looking like a strong thematic game, where in reality it is an abstract strategy game. If the art were washed away, there would be zero theme. Even the added faction specific cards and terrain do little to add to the story of the game. Once understood as an abstract strategy, appreciating the game becomes straightforward. 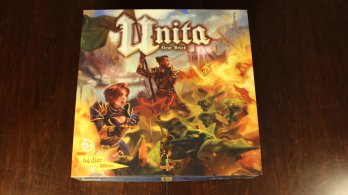 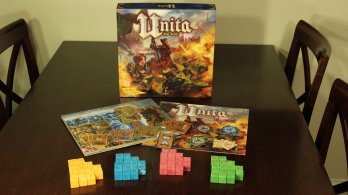 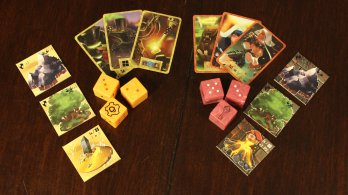 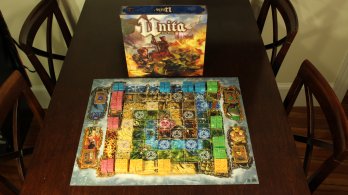 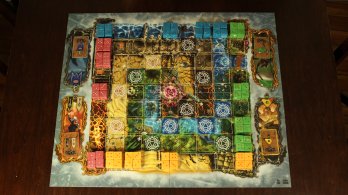 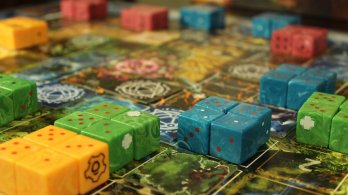 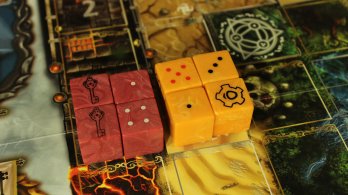 One of the greatest strengths of Unita is the depth of strategy for such a simple rule set. While you can only move three spaces per turn, the game feels like a big multiplayer chess match. Rarely do moves feel obvious, and they always have repercussions on later turns. Beware of analysis paralysis prone players, since overthinking a turn could become an issue.

It is almost impossible to play Unita without ever interacting with another player. The spiraling of the paths ensures that you are going to rub up against your opponents every step of the way. Figuring out and attempting to control when the conflict occurs become key to the strategy of Unita. The terrain tiles add value to this choice, as many players prolong their stays on Mountains (defensive bonus), and try to skip over forests (defensively weak). Inevitably, a player will try to delay moving some of their dice in an attempt to trap an opponent into a weak attack. Sometimes this works, other times players are forced to move along their stagnant troops.

After a battle has occurred, moving the dice around can be problematic. Players have to bump down the dice that lost and switch ranks. This means that players are going to have to lift dice from where they are. Of course everyone tries to do this in one effort, pinching the two dice and lifting them with one hand. Along with the movement of dice, this leads to dropped dice disasters. As the location and value of each dice is vitally important to the game, as soon as someone drops some dice on the board you might as well pack it up. This issue is compounded when there is a fight between three factions. The dice in the middle are almost impossible to pick up without disturbing the others.

To answer my initial question: no, Unita does not merge theme and mechanics, because the theme is so weak. In general, it is hard to find anything bad to say about Unita, other than to say that it is also hard to find good things to say about it. Unita is a fine abstract game, but it is lacking a way to pull players in. The lack of theme is disappointing, but it is made up for with interesting and simple game mechanics. I would only recommend that people try it out before buying.