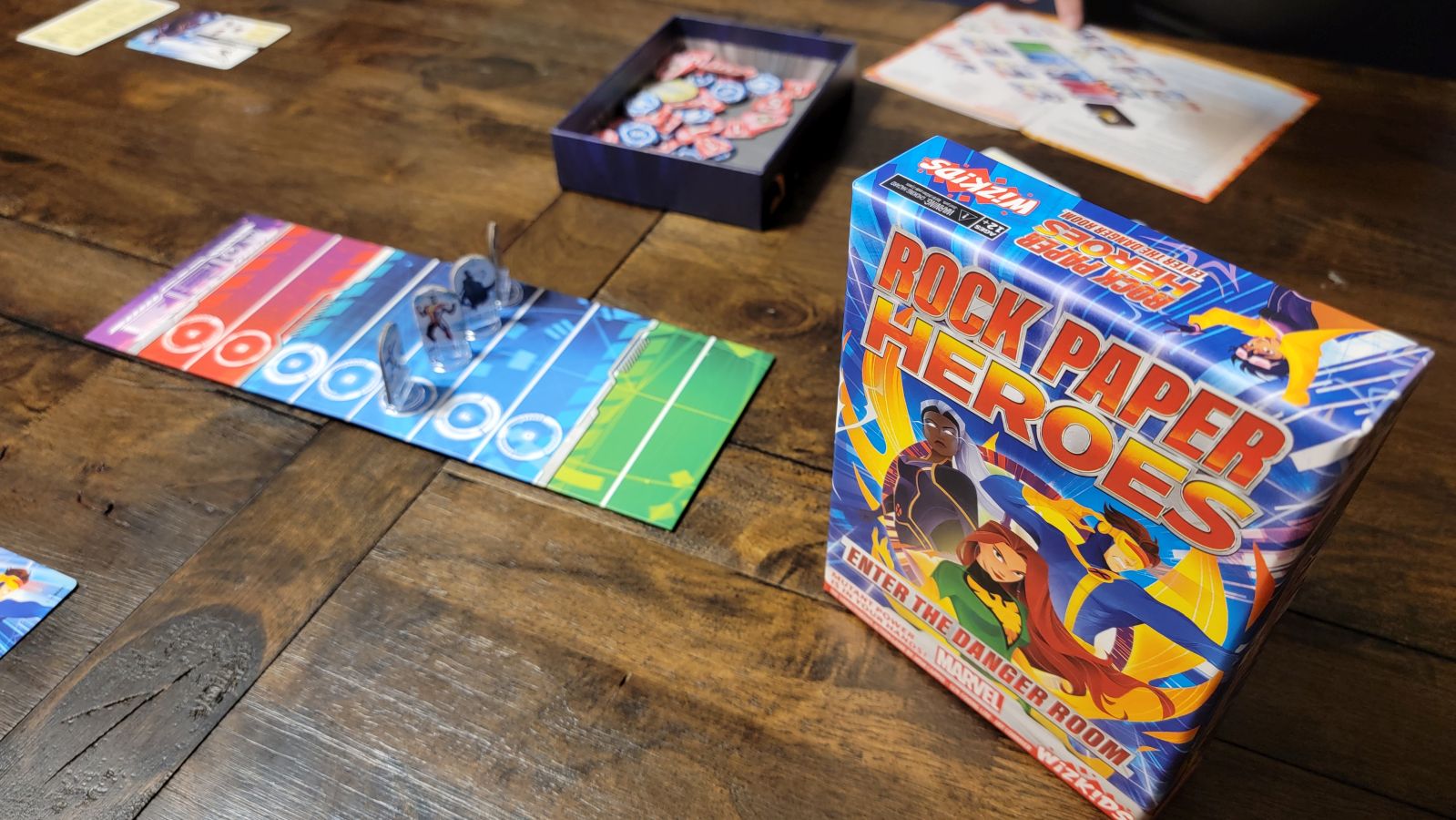 Everybody wants to be part of the X-Men, but there’s one part of being in a superhero mutant team that is a bit of an inconvenience: training. The ­X-Men must constantly hone their skills in Professor X’s Danger Room in preparation for the challenges to come, and while it was always cool to watch the Danger Room fill up with enemies and fantastic scenarios in the comics, in Rock Paper Heroes: Enter the Danger Room, that thrill is unfortunately nowhere to be found.

Don’t get me wrong, Rock Paper Heroes isn’t completely without merit, it has an interesting concept and I enjoyed the aspect of figuring out when to work with or against the other players to overcome obstacles, but at the same time – the premise is too simple and rounds end too quickly to really lend much excitement to the proceedings. 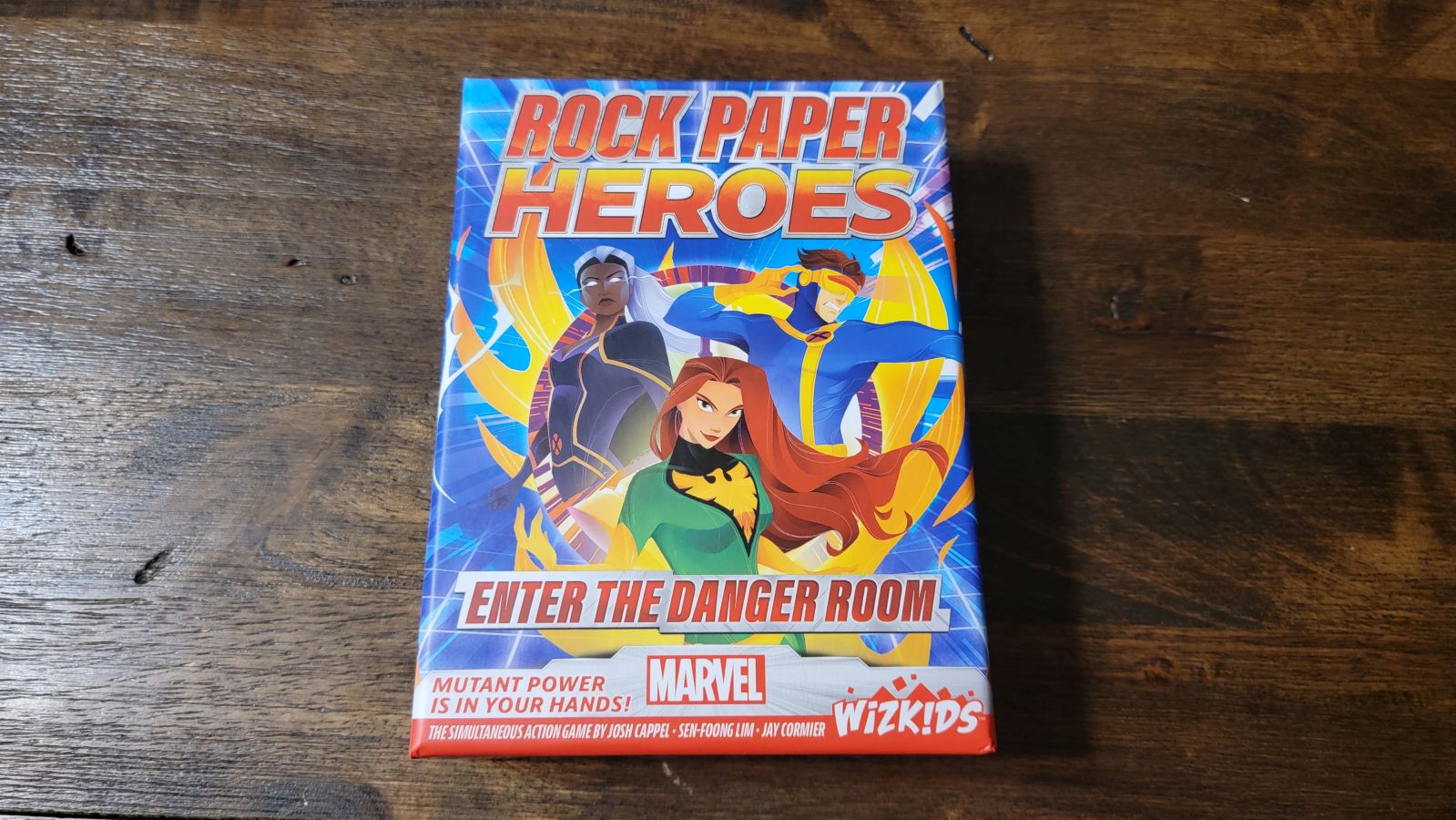 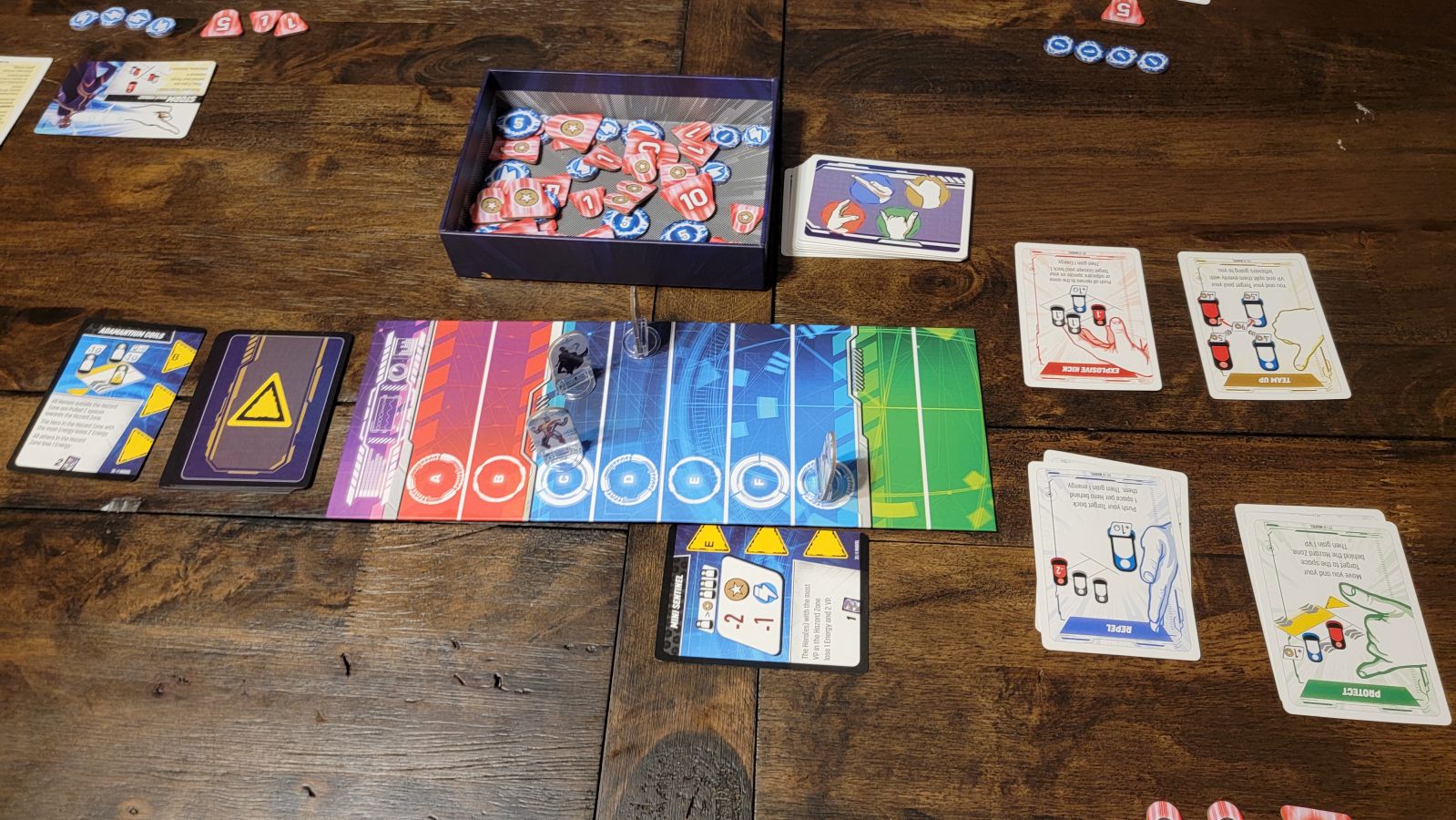 Rock Paper Heroes is essentially a glorified game of paper, rock, scissors. That’s not a knock on the concept though, since as I previously stated, I actually did enjoy this aspect of it. Instead of using the traditional hand signals, you use signals laid out on color-coded cards representing techniques such as Team Up, Repel, Relocate, Ricochet, Rescue, Force Back, Endanger, and Explosive Kick. Cards come in four colors: Blue, Yellow, Red, and Green, with one card of each color laid out at any given time. From these four techniques a player must choose their next move by performing the hand signal shown on the card. Some techniques may help other players, while others will hamper their ability to get out of the danger zone and remove the threat.

But I am getting ahead of myself. Let me explain the core concept of the game. Professor X has laid out a series of dangers which the ­X-Men must overcome. Set up is rather simple. First, you lay out the Danger Room board, which has various subsections on it representing the path you must take to reach the danger room controls. Sections are labeled from A to G, with two additional non-marked spaces at the bottom of the board. Your goal is to make it to A and shut down the danger, if you can’t make it to A, your secondary goal is to get out of the danger zone specified by the hazard card in play.

Each player must choose a character, its plastic standee, and its corresponding character playmat. The standee is placed on the board in section E while the character playmat is laid out in front of the player. The playmat is double sided and includes that character’s super power and the result of using that super power on one side, and a detailed drawing of the character on the other. The playmat must stay flipped over on the drawing side until a player decides to use an energy token to perform their super power. There are eight characters to choose from: Jean Grey, Wolverine, Jubilee, Kitty Pryde, Rogue, Storm, Cyclops, and Colossus. 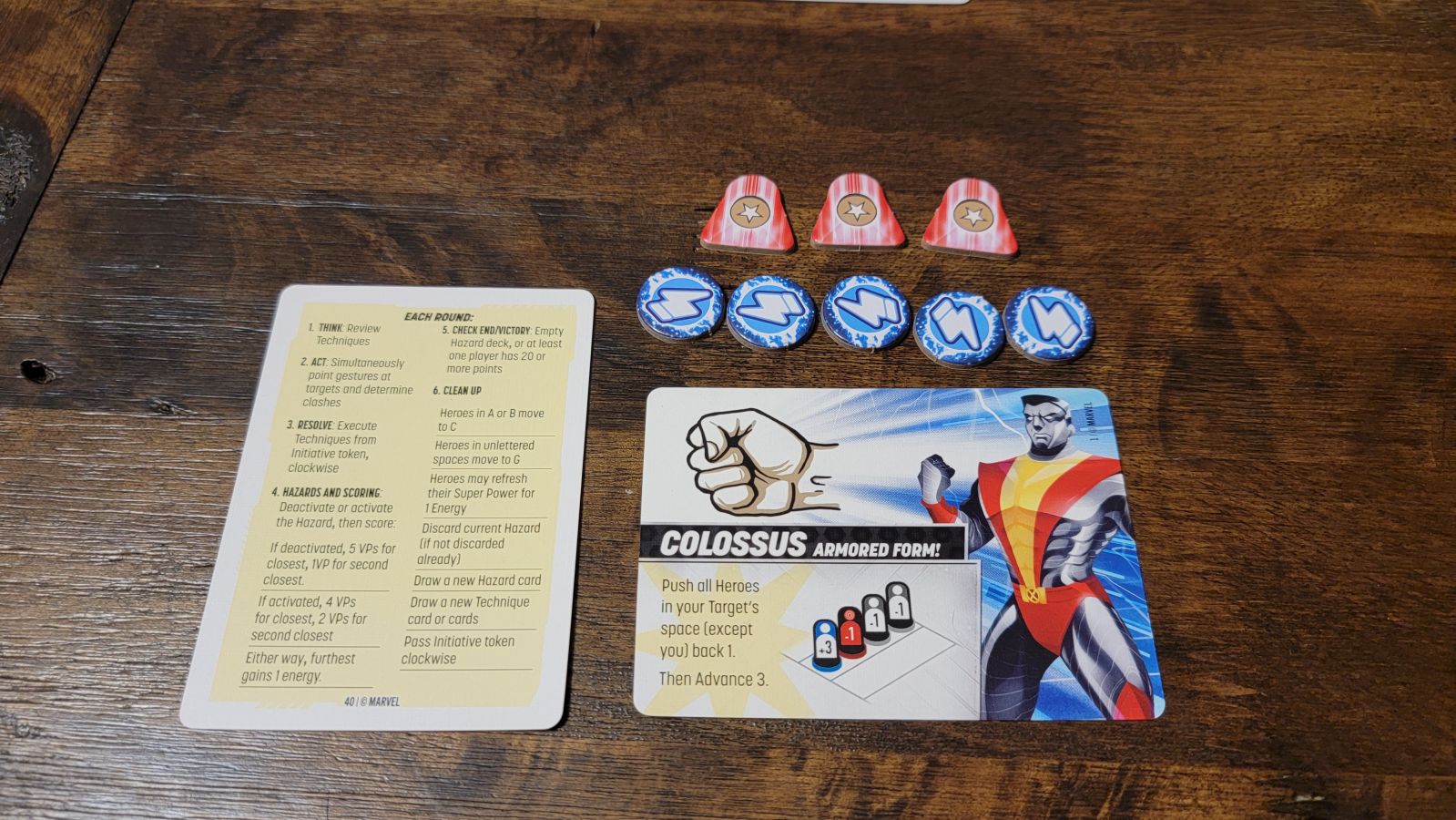 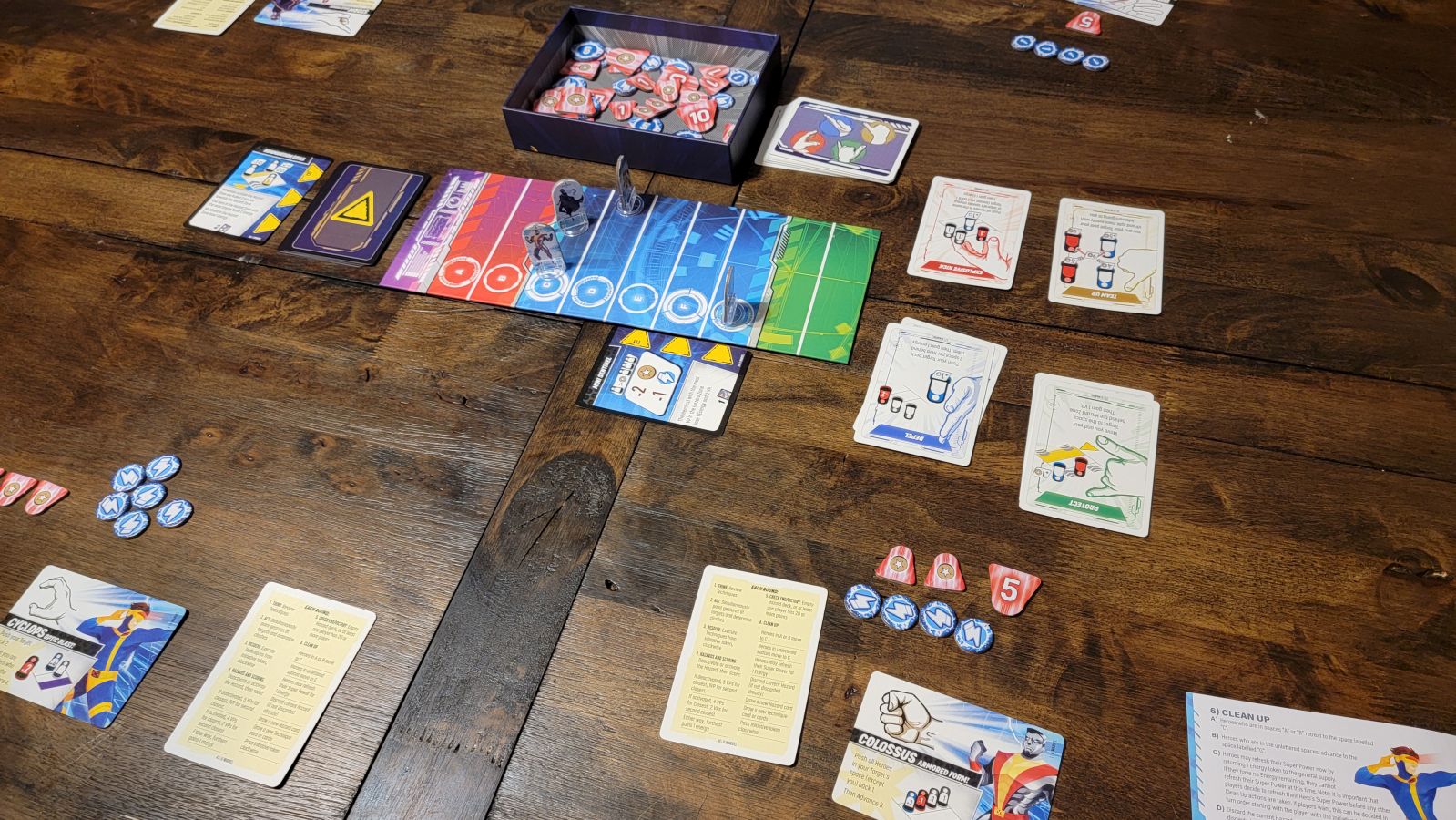 Once characters are chosen, you will then shuffle and lay out four technique cards, one for each color. You will then draw one hazard card, which either has a letter on it on one of its three yellow arrow spaces, or the word “Leader”.  If a letter is on the hazard card, then you must lay that card beside the corresponding space on the danger room board. If it states Leader, then you would lay the card next to the space hosting the character that is currently closest to the controls. The hazard card explains what will happen to all players if one of them does not reach the controls before the round is over.

Players begin with three victory point (VP) tokens and five energy tokens. The goal is to collect 20 VP before the other players. Energy tokens are used to enable your super power but can also be lost when hurt by another player or the active hazard.

At the beginning of each round players chant “Rock, Paper, Heroes!” and then point at the player they are challenging while simultaneously performing one of the four active technique hand gestures. The order by which techniques are resolved is determined by the initiative coin, which begins with the player who last read a Marvel comic and then moves clockwise around the room after each round.

Here’s a quick example of a round: Player 1 points to player 3 and uses the Repel hand gesture, thereby pushing their target back 1 space per Hero behind them. Player 1 would then receive 1 energy token. Play then moves to Player 2, who is pointing at player 1. Player 2 uses the Ricochet gesture, which pushes their target back 3 – but unfortunately also pushes their target’s target back 2 spaces, which in this case was themselves. Play continues like this until all players’ techniques have been resolved. At the end of the round you will determine if anybody made it to the controls. If so, then the hazard has been disabled. Any hero in space A receives 5 VP, while the second closest to the controls earns 1 VP. The heroes furthest away gain 1 energy. If no player has disabled the hazard during a round then you would play out the hazard scenario listed on the card. Hazards may pull players not in the danger zone toward them, or may only affect those in one of the three danger zone spaces. When a hazard is activated it normally causes players to lose energy or VP and to move to specific areas, before then gaining VP and energy based on their location on the board. Once a round is finished you will then lay out new technique cards, the amount of which are determined by a number at the bottom of the hazard card, and then lay out a new hazard card. 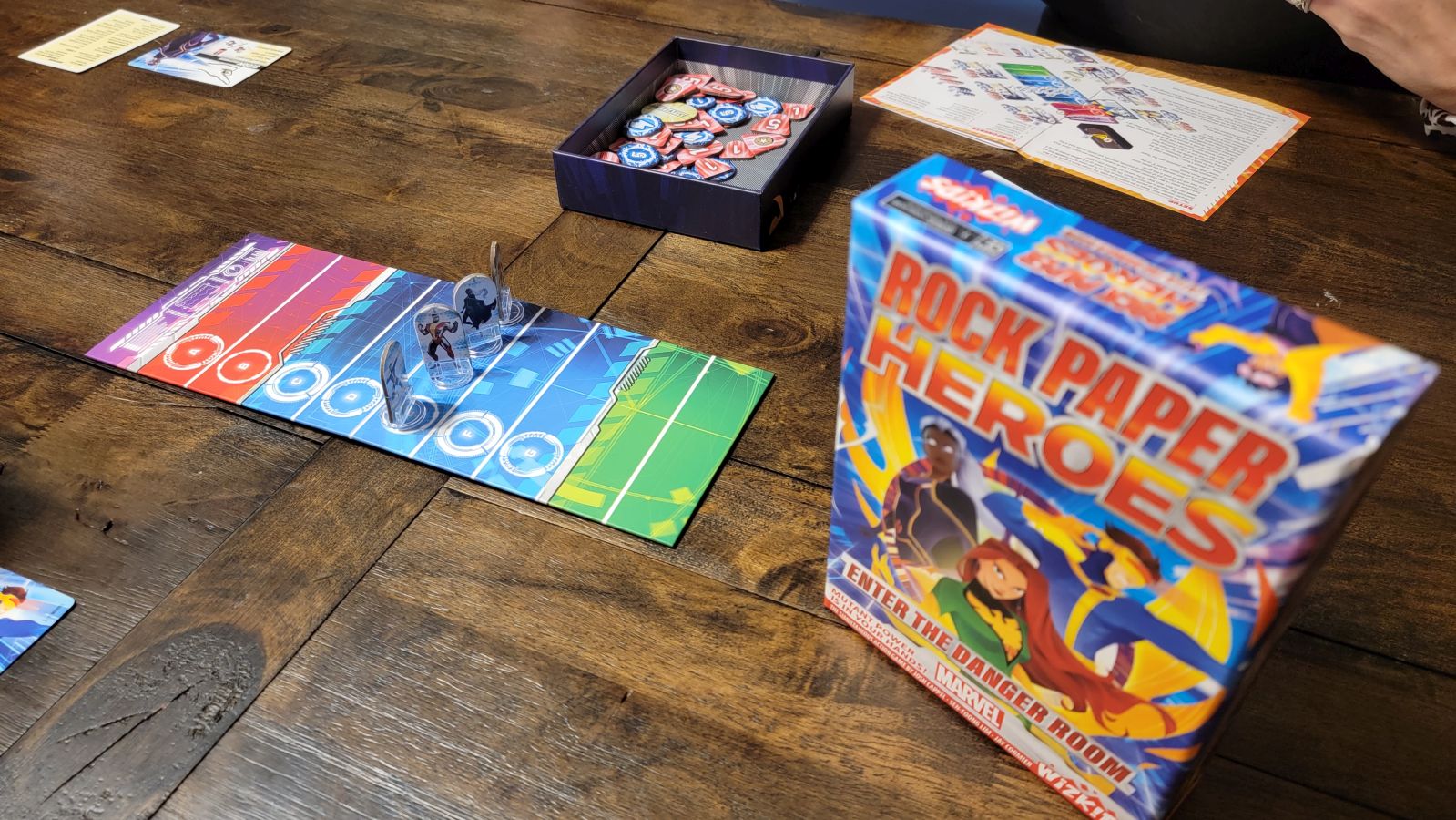 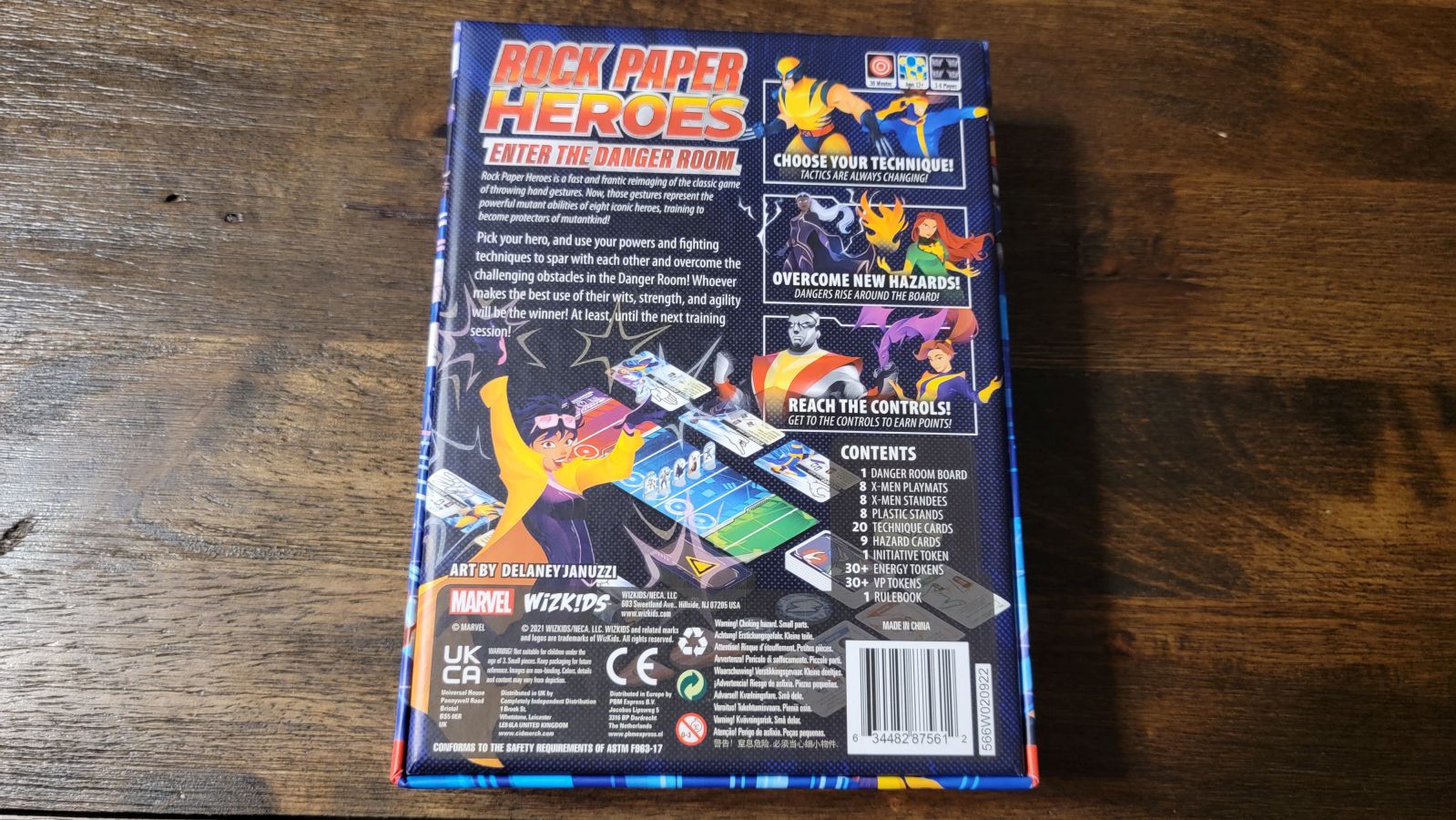 On any turn a player may choose to spend an energy token and use their super power, rather than one of the techniques. Super powers vary by hero, but may allow the player to perform actions such as pushing all players back and then advancing 3 steps, allowing the player to move to the same space as their target while simultaneously pushing their target back 1 space, etc. Super powers are helpful for gaining the upper hand and reaching the controls, and would feel more important if energy wasn’t so abundant. I never felt that I had any reason to not use my super power every turn; the only thing which kept me from doing so was how un-fun that would be. I preferred to do the hand gestures as that at least left me not knowing how my turn would play out.

My initial excitement to play faded rather quickly, as there’s little strategy involved in reaching your objective. On most rounds nobody will reach the controls, and even when someone does, the reward isn’t much different than if you hadn’t. Likewise, the punishments rarely were severe enough to cause any real strife for a player. I feel that much of the excitement could have been saved by having a larger board, along with longer rounds where players had chances to strategize against each other and plan revenge attacks, rather than play essentially resetting each round.

The game is fun for a playthrough or two but will most likely be quickly replaced by more strategic party-friendly experiences. It doesn’t help that the instructions are quite confusing on first read through, with a mistake at one point telling you to proceed to step 5 on page 8, but then there being no step 5 on page 8. It’s simple enough to figure out that they meant step 6, but still, it’s a mistake that should not make it into a final release.

There may be a few who get a kick out of the rock, paper, scissors concept and enjoy playing enough to learn all the techniques and best moments to use them, but my friend group and I found the overall experience to be a bit dull. We did liven things up by spending a few rounds blindly choosing a technique to play, rather than making any attempt at strategy. I understand that this is not the designer’s intention, and we did play multiple rounds the correct way, but we had hoped our changes would add a bit more excitement to the proceedings.

Either way you play, I’d suspect that most will put the game up after a half hour or so and switch to a more tense or exciting experience. Those 30 minutes may be worth it to some fans of Marvel, but unfortunately for me I can’t see this being one I’ll bring to get-togethers in the future.

Rock, Paper, Heroes: Enter the Danger Room offers a unique twist to the rock, paper, scissors game we all know, but unfortunately the gameplay just isn’t exciting or deep enough to serve as anything more than a short diversion between other games. Younger Marvel fans may appreciate the concept and artwork and have fun with the game, but it’s doubtful many older fans will find the game rewarding enough for more than a few playthroughs.

Richard Allen is a freelance writer and contributing editor for various publications. When not writing for Gaming Trend you can find him covering theatre for Broadway World, movies and TV for Fandomize, or working on original stories. An avid retro gamer, he is overly obsessed with Dragon's Lair. Chat with him via @thricetheartist on Twitter and @richardallenwrites on Facebook and Instagram.
Related Articles: Rock Paper Heroes: Enter the Danger Room
Share
Tweet
Share
Submit