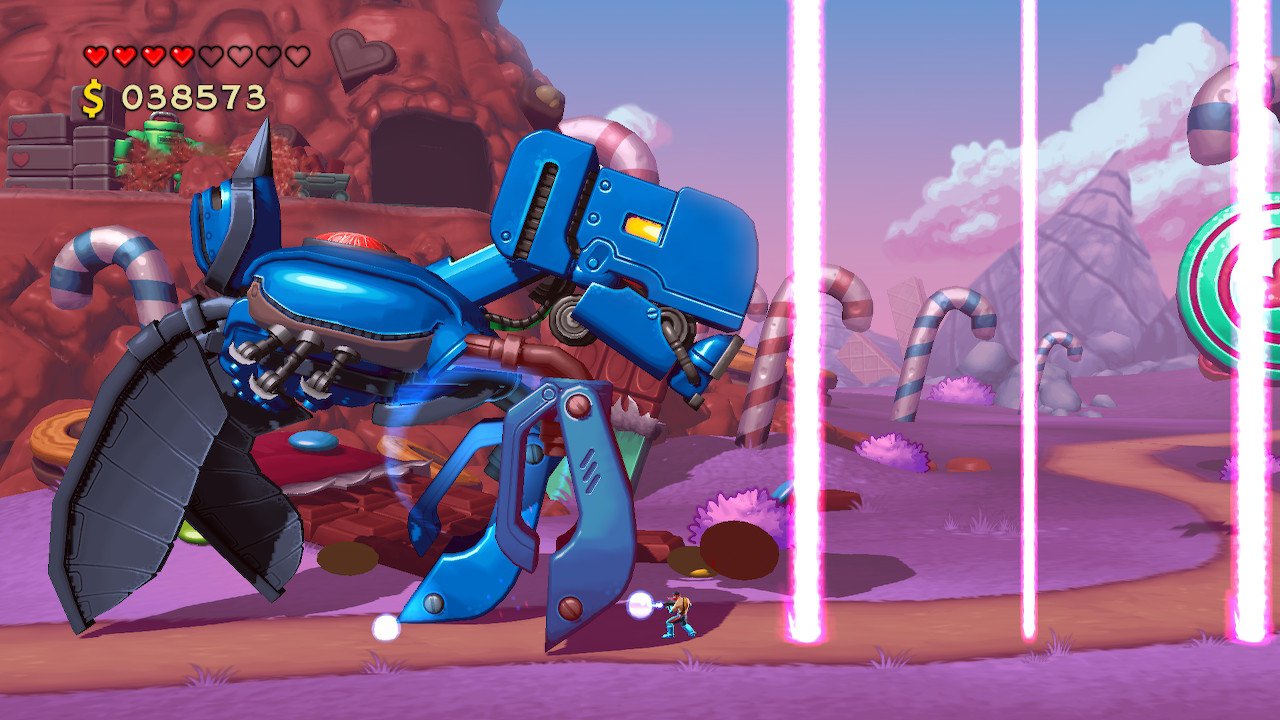 The Gunman Clive duology holds a special place in my heart. The second game was actually my first Opencritic review, and it actually inspired me to pursue games writing, so you can bet I was excited to see what Bertil Hörberg had up his sleeve next. Enter Mechstermination Force, a run-and-gun boss rush that’s more about beating up malicious baddies than traversing platforms. In short, it’s fun, fairly difficult, and oh so satisfying. 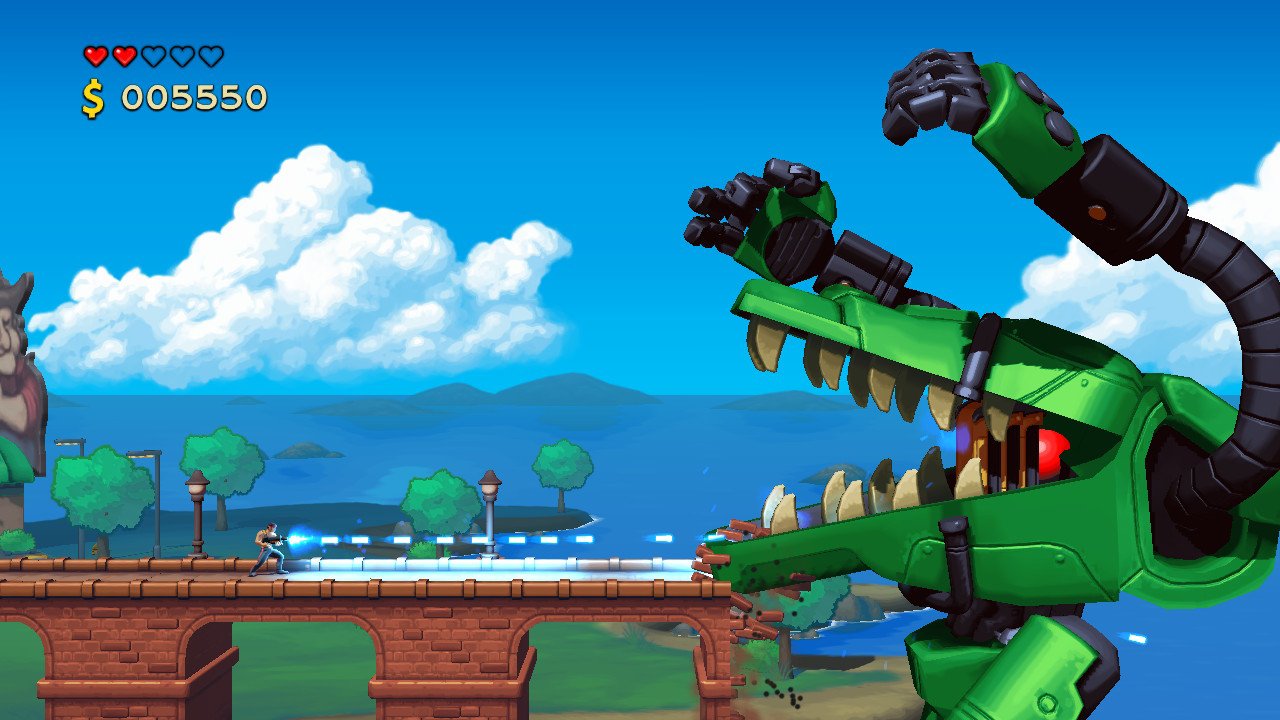 Mechstermination Force plops you in the middle of the action as you fight 14 different Mega Mechs, robotic monstrosities that have taken over the world. You choose one of four fighters (as well as an unlockable Gunman Clive should you own the HD Collection on Switch) as you try to turn these mechs into rubble. You do this with the help of your trusty firearm as well as a short-range but powerful melee attack. Enemies will show their weak points throughout your fights, with red cores being targets that can only be damaged with your melee attacks. 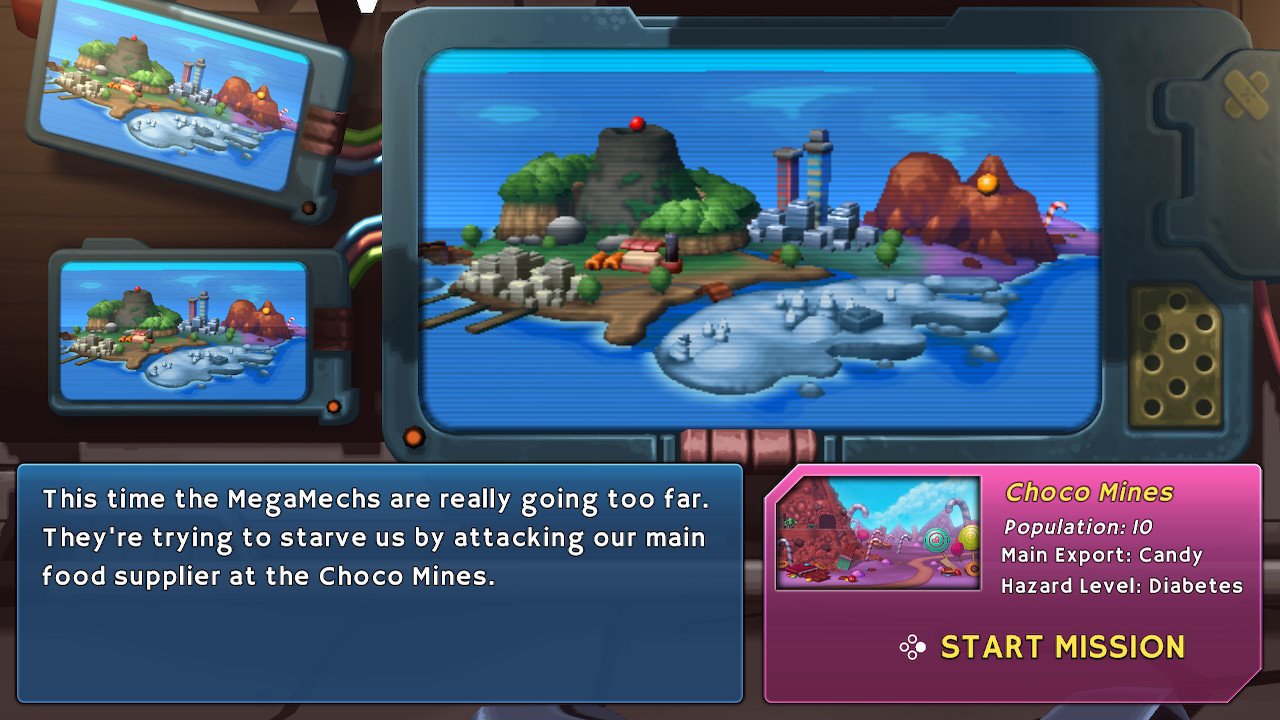 Other than a hub level that you can explore, your main stages consist purely of boss fights. The story is told in between battles by a skeleton crew of survivors, and while it’s nothing to write home about, the tongue-in-cheek atmosphere of a war-torn land is kind of intriguing. This emphasis on gameplay puts it squarely in the territory of games like Cuphead, Furi, and Shadow of the Colossus, except you condense that to go straight to bullet-hell bliss. The game starts out simple enough, as your peashooter gun can be upgraded to weapons that have their own advantages and disadvantages (from short-range weapons like flamethrowers and plasma bombs to long range weapons like lasers and wave guns). After beating enough bosses, you’ll be able to get gloves that allow you to climb on future bosses and terrain, as well as a double jump ability. Mechstermination Force is a game with a few simple mechanics. What it does, it does exceptionally well.

You begin with a straightforward Mechtorial (all the bosses carry a “Mech-“ naming scheme) that introduces you to dodging enemy fire. After that, the difficulty ramps up, with each boss sporting a different theme and approach to defeat them. They’re all pretty goofy yet dangerous, and I had a great time trying to decipher how to defeat each of them. Almost every mech has multiple forms, with a handful of them giving me a, “You gotta be kidding me!” reaction after I thought I beat the last one. Case in point, the Mechaman boss splits itself into two pieces once you whittle down its initial armor; defeat one of those two parts and it splits itself again. There were many instances where I felt like I won, only to be decimated a split-second later by a nearly unavoidable attack. 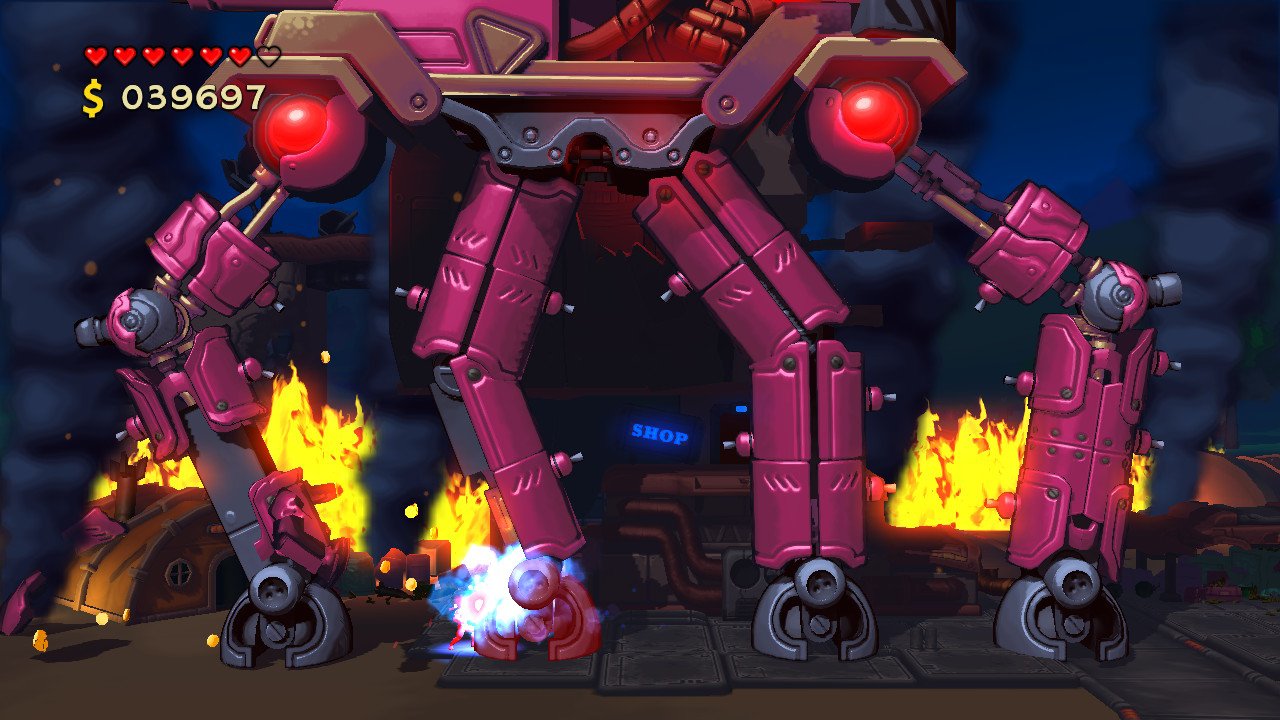 That being said, Mechstermination Force is a tough but (mostly) fair game. Every boss has attacks that are easily telegraphed and avoidable, and while the game can pummel you time and time again, there is incentive to grind and practice due to the upgrade system, where you can purchase more powerful weapons or even more health with the money you receive from fighting. This means even if you end up failing a couple… dozen times at a boss, there’s still progression in the form of collectible currency you can use to strengthen yourself up and try again. You can also replay defeated bosses by going into the arcade machine at the hub world, which is helpful if you want to beat your own record (you can get stars and more money by completing bosses with insane times, or even by not taking any damage). You can also play the game with two players, which could be helpful for those that want a slightly easier experience. It might only be a few hours long, but Mechstermination Force has some great replay value for those that want to hone in their skills. 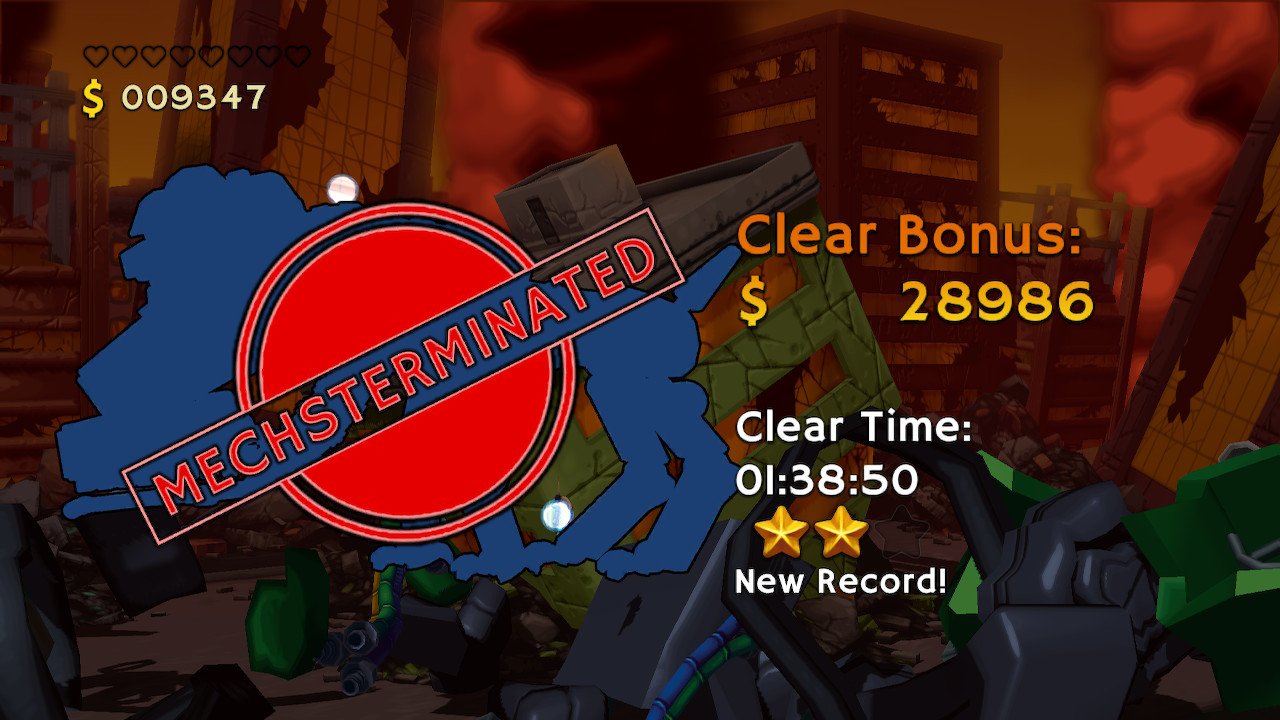 While there are some great highlights in the package (the Mega Man-feeling room that hosts the Mechrachnid and the three-enemy Trimechalon spring to mind), there are a few fights that feel unfair due to the mechanics. Mechbeth (a towering colossus-like robot you encounter after you get the gloves) is probably my least favorite because the game’s climbing mechanics feel clunky and inaccurate. There were many times in the fight where I would lose my grip, even though I knew I connected with a wall, and the constant need to switch between climbing and shooting made this boss a bit more monotonous than the rest. I actually didn’t like the climbing portions of the bosses, and those that did use this mechanic extensively felt more frustrating than fun. The hit detection feels sloppy, and the bosses with platforming or dodging mechanics were more superior in that respect. In a game where you only fight bosses, this does hamper the experience somewhat. 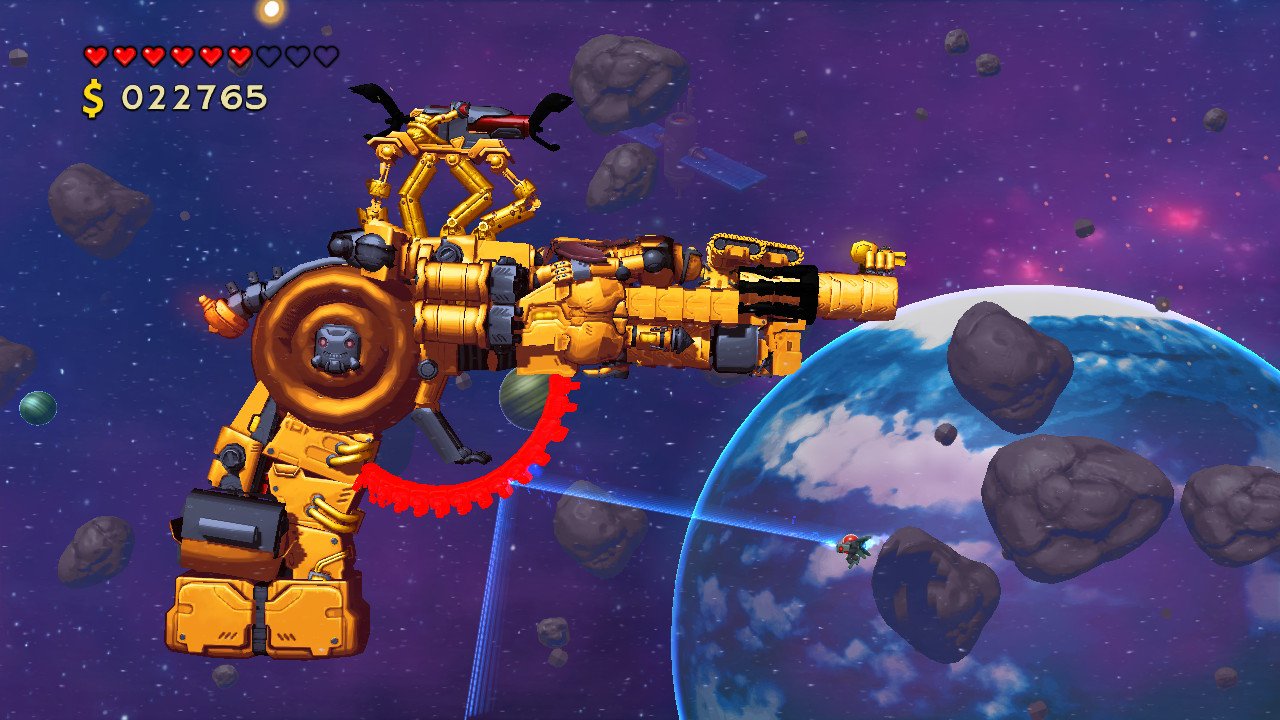 On a technical performance standpoint, the game is solid, as it never stuttered in handheld or docked mode and ran pretty smoothly. The graphical style is acceptable, with a goofy (if slightly generic) aesthetic; it looks like a slightly worse version of Gunman Clive, but that’s probably due to Mechstermination Force lacking the deliberately crayon-esque art the former had. The music is exciting and fitting for the silly tone of the game, and I appreciated the variety of tracks here, much like I did with the Gunman Clive series.

Mechstermination Force is a wonderful follow-up to Bertil Hörberg’s Gunman Clive series. While it can get a bit frustrating at times, the silly atmosphere and tough but entertaining gameplay make for a great time for those who want some simple, unadulterated fun.

Elisha Deogracias is an aspiring accountant by day, freelance writer by night. Before writing for Gaming Trend, he had a small gig on the now defunct Examiner. When not being a third wheel with his best friends on dates or yearning for some closure on Pushing Daisies, he's busy catching up on shonen manga and wacky rhythm games. Mains R.O.B. in Smash. Still doesn't know if he's a kid or a squid.
Related Articles: Indies, Mechstermination Force
Share
Tweet
Share
Submit