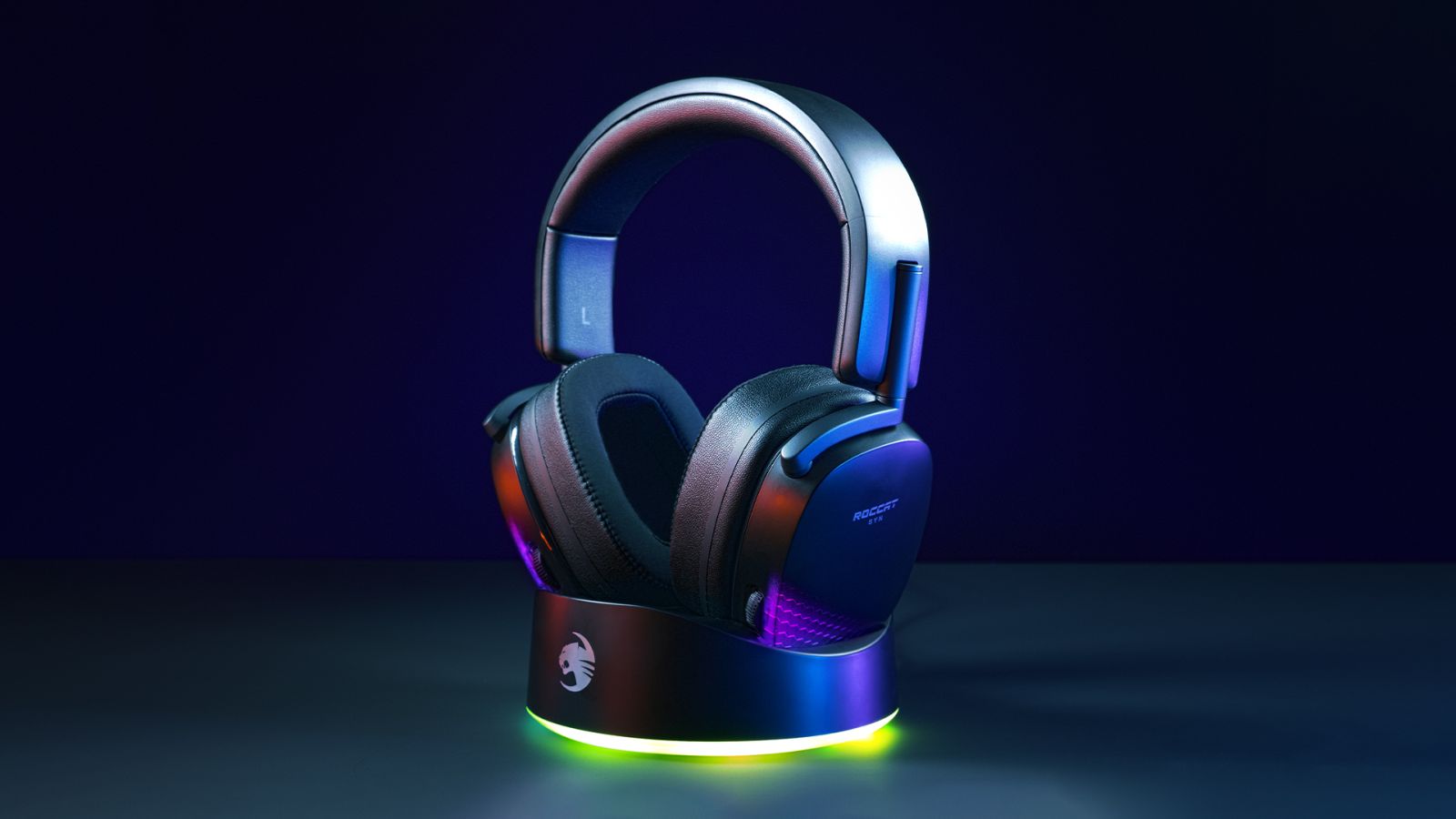 Headsets headsets headsets blah blah blah. At least, what I assume y’all hear when I talk about these at this point. I’ve messed around with a bunch of headsets this year, and boy, they can sound many different ways. One company I haven’t ever tried one from is Roccat, a Turtle Beach subsidiary who’s been making some awesome stuff we’ve talked about before. With the new full featured Syn Max Air hitting the shelves, we just had to see what all the fuss was about.

Starting in the box, it comes with the aforementioned Syn Max Air wireless headset, a removable mic, the charging dock/transmitter, two USB-C cables (one USB-A and one USB-C to provide the best options for charging), and a USB-A to C adapter along with the paperwork. Everything is as it should be and ready to rock with your favorite games. On the headset everything is decently minimal, volume and mic-monitoring wheels, a USB-C port for charging and updating, contact points for dock charging, a flip up mic, Bluetooth button, and of course the important power on and off button. Something odd with the buttons is how long you have to press them to activate the function; I swear it takes at least five seconds if not longer to turn the headset or Bluetooth on.

The headset itself looks the part, and is one of the nicer looking ones out there. Part of that is the RGB, but we’re not to that section yet. There’s just a clean look to it, with sleek black plastic adorning the outside. For a headset boasting the heavier duty 50mm drivers, it isn’t too big or weighty. The fit is a bit tight out of the box, which is a part of the way the design comes together, but once you wear it for a while it fits to your head better. It is comfortable over long gaming sessions, and in the end that’s a big plus.

One thing I’m not thrilled about is the build, with the plastic feeling a bit cheap. The term delicate comes to mind, and that’s not something I want to think about when spending a bundle on a headset. Besides that, I noticed some of the memory foam around the top of the frame separating after sticking them on my big head. It was at the corners of the headset where the memory foam connects together, so it might be made to do that, but it was a bit unnerving to look at.

When these things cover your ear and your audio starts going is where they really shine though. First things first though, if you’re going to be using them on PC, download the Roccat Swarm software. The headset is terribly optimized as is, so not only is it worth updating it, but you’re going to get the most out of it by running it through the equalizers and filters Turtle Beach and Roccat have developed. Without it (on PC at least), things are simply too loud without much clarity.

Back to the audio, this headset features super crisp sound that certainly measures up to its peers and the Turtle Beach name. You may have seen our review of Call of Duty: Modern Warfare II, and if it’s not obvious by now, I play a lot of it. With the new Modern Warfare II still having pretty loud footstep audio, I was at an advantage constantly, especially when the Swarm software has a Footsteps Boost option for the Superhuman Hearing provided. The spatial 3D audio is on point, giving you a crystal clear experience.

This was the case whatever platform I moved to, and with different games in play, such as Gotham Knights where I could hear the bad guys approaching from behind when engaging multiple in a fight. You know that I had to also give some time over to music, and the Syn Max Air gets two thumbs up from me in that category, with the 50mm drivers putting in work with some nice bass. If there’s a selling point for this headset (and really any headset), incredible sound is probably the best one to have.

Even better, the Syn Max Air has Bluetooth, and simultaneous Bluetooth at that. This means you can answer calls while playing a game, or use other functions that involve audio. What I didn’t expect was how amazing Roccat’s version of this was. When my phone rang, the game sound quieted to help me realize what was going on, and when answering it the game sound faded out. Maybe I’m just a sucker for it, but the whole fading out rather than cutting off is a nice touch. I attempted to listen to some music from my phone as well, and it integrated perfectly. Using my phone, I was able to up my volume to where I wanted it, with the game sound still doing it’s thing as if I hadn’t changed a thing. It’s an awesome feature, and the Syn Max Air handles it perfectly. 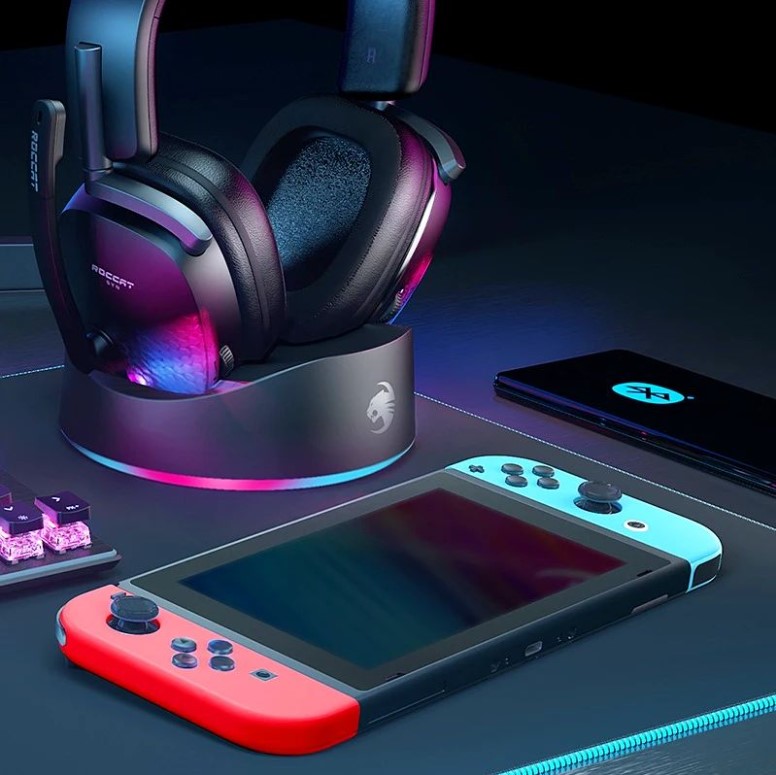 Something that isn’t handled perfectly is the volume wheel, and I’m curious as to why I’m dealing with it the way I am. Using it on PC, it adjusts my actual volume balance in my sound settings, not the headset volume. I thought that was weird, but when I used them with my PS5 the volume wheel did absolutely nothing. It’s really weird, and I’m left wondering if something is either wrong with the headset itself, or if this was a design choice. I don’t like it, no matter which one it is, and it hurts the Syn Max Air in an area that shouldn’t be a problem.

The dock is also a strange bird. Let me say this, I love the RGB base. It looks cool and adds some extra fanciness. But I’m not a fan of a dock being the “dongle” that connects your wireless headset to a device. It makes it less portable, and worse, I’d imagine it’s harder to replace. There’s also the issue of the contacts, which don’t touch the headset all that well. I feel like I’m in a bit of a fight with the Syn Max Air when trying to get it to charge via the dock, especially now that my big head has stretched it a little. Thankfully there’s a USB-C port, but the dock isn’t as useful as I’d hoped. I’d personally rather have a wireless dongle, or at least, a dongle removable from a dock. 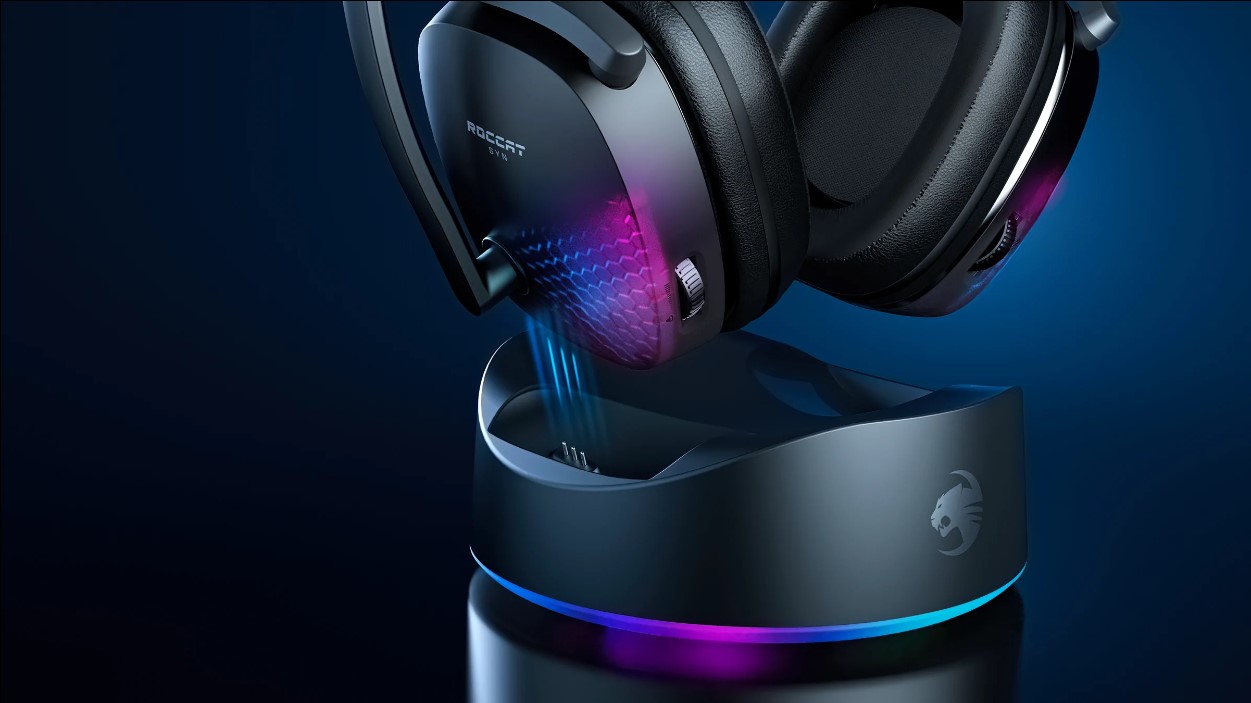 Speaking of charging, the battery life on the Syn Max Air is okay, but not stellar. I put it through a few paces, and with RGB running for a bit of it (Aimo’s intelligent lighting turned it off when the battery got low), I got roughly four hours of play in before I knocked the battery down to 50%. It’s not terrible, and of course RGB will destroy battery life, but you aren’t going to get anything more than the sixteen hours advertised. Beyond that, no 3.55mm jack means if it’s dead, it’s dead, at least until the USB-C rapid charging can give you a jump.

No 3.55mm jack also means this version of the headset isn’t going to work on an Xbox (at least passively), but this headset is incredibly versatile anyway. Between the dock/transmitter and Bluetooth, you’re going to easily be able to use this with your PC, PlayStation, Switch, phone; even the Steam Deck or Meta Quest if you wish. If it has Bluetooth, it’s possible, and that’s always going to be a favorite function of mine for a headset. It opens up so many possibilities.

For those curious how the mic is, I was surprised to find it sounded pretty darn good. I usually prefer to use my Elgato Wave 3 mic when I’m playing something because it’s tough to match the clarity of a streaming microphone. The Syn Max Air doesn’t rise to that level, but it’s one of the better ones I’ve tested. Back to Modern Warfare II, my callouts and voice were clear, and that’s all I can ask for when using a headset mic. Of course, a quick way to my heart is a flip to mute mic, and the Syn Max Air’s is precise, clicking into place and beeping to let you know you’re muted. 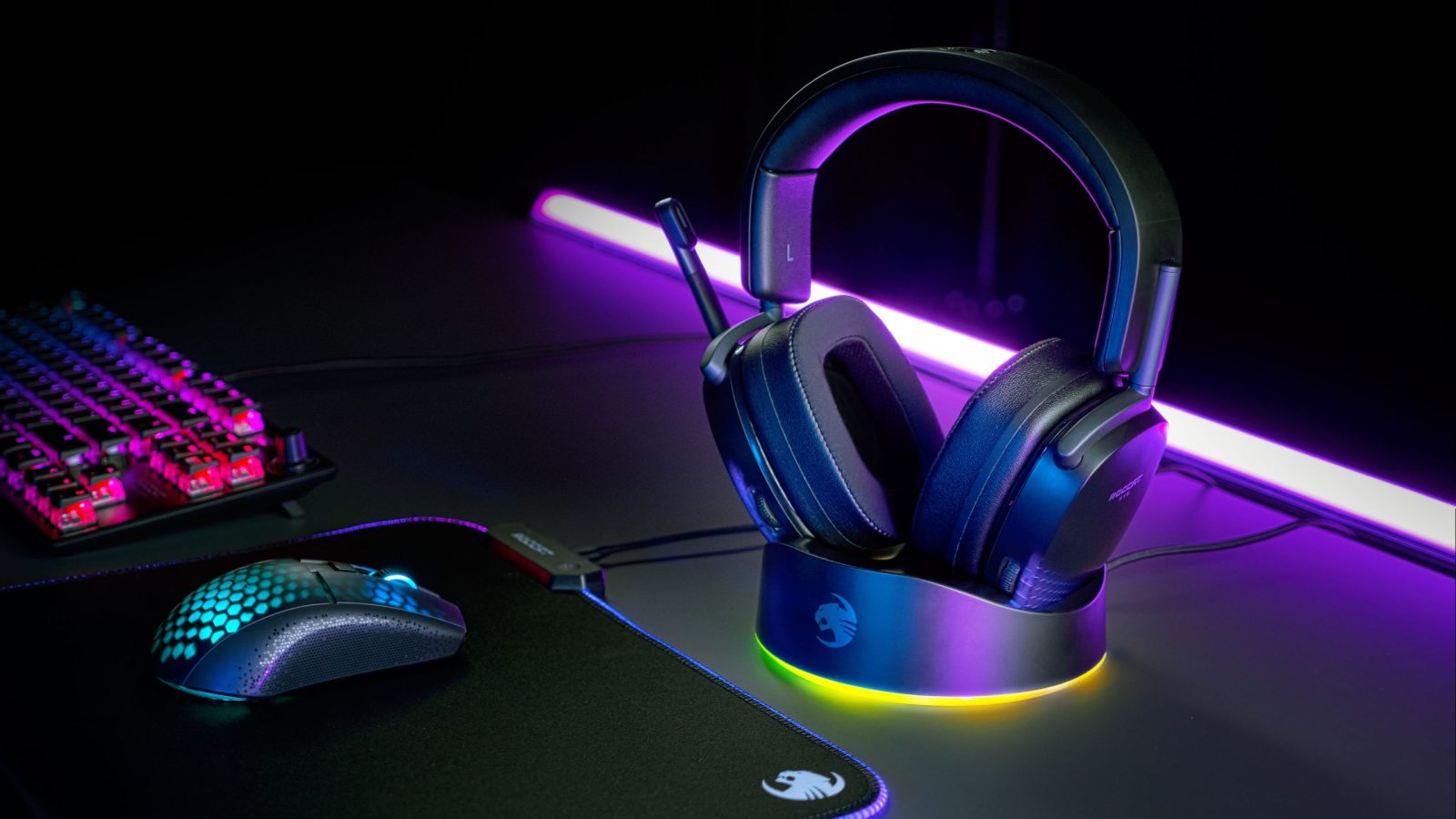 Lastly, let’s chat some RGB. The Syn Max Air speaks to the ADHD person in me who loves shiny things, but it’s not just slapped on there. The dock is certainly the draw, with a bright base plate that’s hard to miss. On the headset however, the very bottom of the earcups have a neat honeycomb design that the RGB emanates from. It’s more subtle than the dock, but can be customized via the Swarm software, and I love how it also matches the color and flow of the dock. Roccat didn’t go overboard with it, and I appreciate the nice touch it is rather than the mess it could have been, especially considering the stress the battery is already under.

There’s a few issues that need ironing out, but this Roccat has a nice purr. The purr of course being the sound quality, which is superb and has only grown on me with time. Pair that with fantastic simultaneous bluetooth, versatility between devices, a great mic and a smattering of RGB, and you have the Syn Max Air. Clean up the flimsy frame and swap the dock with a wireless dongle and they might have one of the best headsets on the market.

David Burdette is a gamer/writer/content creator from TN and Lead Editor for Gaming Trend. He loves Playstation, Star Wars, Marvel, and many other fandoms. He also plays way too much Call Of Duty. You can chat with him on Twitter @SplitEnd89.
Related Articles: Roccat Syn Max Air
Share
Tweet
Share
Submit