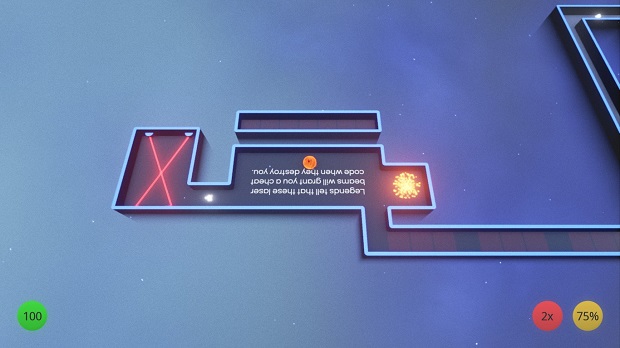 As the name implies, Road to Ballhalla is about enduring rigorous trials in the hopes of securing greatness. Instead of looking to impress the Norse gods, however, you’re just a little marble trying to make your way around without getting brutally smashed.

This recent offering by tinyBuild is a puzzle game first and foremost. There are all manner of deadly obstacles in your way, from lasers to giant warballs, so precision when exploring levels is key. There are four worlds to conquer – Corollia, Ballderaan, Dagoball, and Rollin IV – so if you ever hope to reach the legendary Ballhalla, you can’t slip up.

As you progress, the puzzles begin to build on each other. Red tiles will drain your health slowly if you hit them when they’re flashing, pink tiles can both move around and harm you substantially, and blue tiles will kill you instantly unless you grab a key that makes them safe. You need to tuck away the knowledge you gain for use in the future. After just a few levels, this game ramps up to become an insane challenge.

Road to Ballhalla could be partly considered a rhythm game. The soundtrack is pleasing to the ear and, more importantly, it coordinates with the patterns of the landscape. Just match your movement with the beat of the music, and avoiding flashing tiles or a sequence of lasers won’t have quite the sting.

Success in Ballhalla comes down to a couple of different elements. There are glowing yellow dots scattered throughout every level, and a combination of the amount you collect and the number of respawns you use determines how many tokens you earn at the end of the run. Each world has a few levels to complete, but even if you get through them all, you can’t open the next world if you don’t also have enough tokens. You have to earn your way through; there aren’t as many points given for simple participation.

The physics in this game are excellent, which is both a blessing and a curse, because it’s so hard to keep a marble under control when it just wants to roll around. You’ll frequently find yourself teetering into obstacles or careening off of edges with the slightest wrong movement. Thankfully, there are a handful of white glowing orbs in levels that serve as checkpoints. As a double bonus, they replenish your health as well.

From the beginning, you’ll see that Road to Ballhalla has a sense of humor all its own. The names of levels and worlds were cleverly concocted, and the messages throughout the menu screens are fairly playful. Text that appears on the floor or hovering in the air next to courses is witty, unhelpful, and sometimes quite rude.

In spite of the amount of checkpoints per level or the suggestions given that are actually useful, this game is astoundingly difficult. Just when you think it’s tapped out, it presents another hellish puzzle to navigate. Maybe I’m too sensitive, but having a game mock me when I’ve already blown through 87 respawns and feel no closer to the end is infuriating. I’m not a person who likes arguing or playing the devil’s advocate, and it’s hard to enjoy myself when a game is frustrating me. Eventually, I have to close it and step away.

On top of this, as I mentioned before, certain areas or perks in Road to Ballhalla are roped off if you aren’t skilled enough. This can be both rewarding and insulting. Accompanying every level are time trials, where you can earn stars and unlock trials for further stages, as well as see how you measure up on the online leader boards. There are even secret locations to be discovered and bonus ball styles, reserved only for the most worthy.

Road to Ballhalla will be an addictive puzzler and proving grounds for some, while serving as an aggravating diversion that occasionally pays off for others. If you have what it takes, you can uncover all the surprises it has to offer, and if not – well, at least you’ll get a few hours of tormented fun out of it.

Road to Ballhalla is an insanely difficult rhythmic puzzler. It’s enjoyable and agonizing in equal measure, tossing a variety of trials at you then teasing you when you don’t overcome them on the first try. For those who can fight their way through and remain cool-headed, dozens of neat features and hours of playtime await.

Sarah Marchant is an office admin for a nerdy t-shirt company. She has a soft spot for indie games, a passion for story-driven titles, and a weakness for cooking games and anything with zombies.
Related Articles: Road to Ballhalla
Share
Tweet
Share
Submit