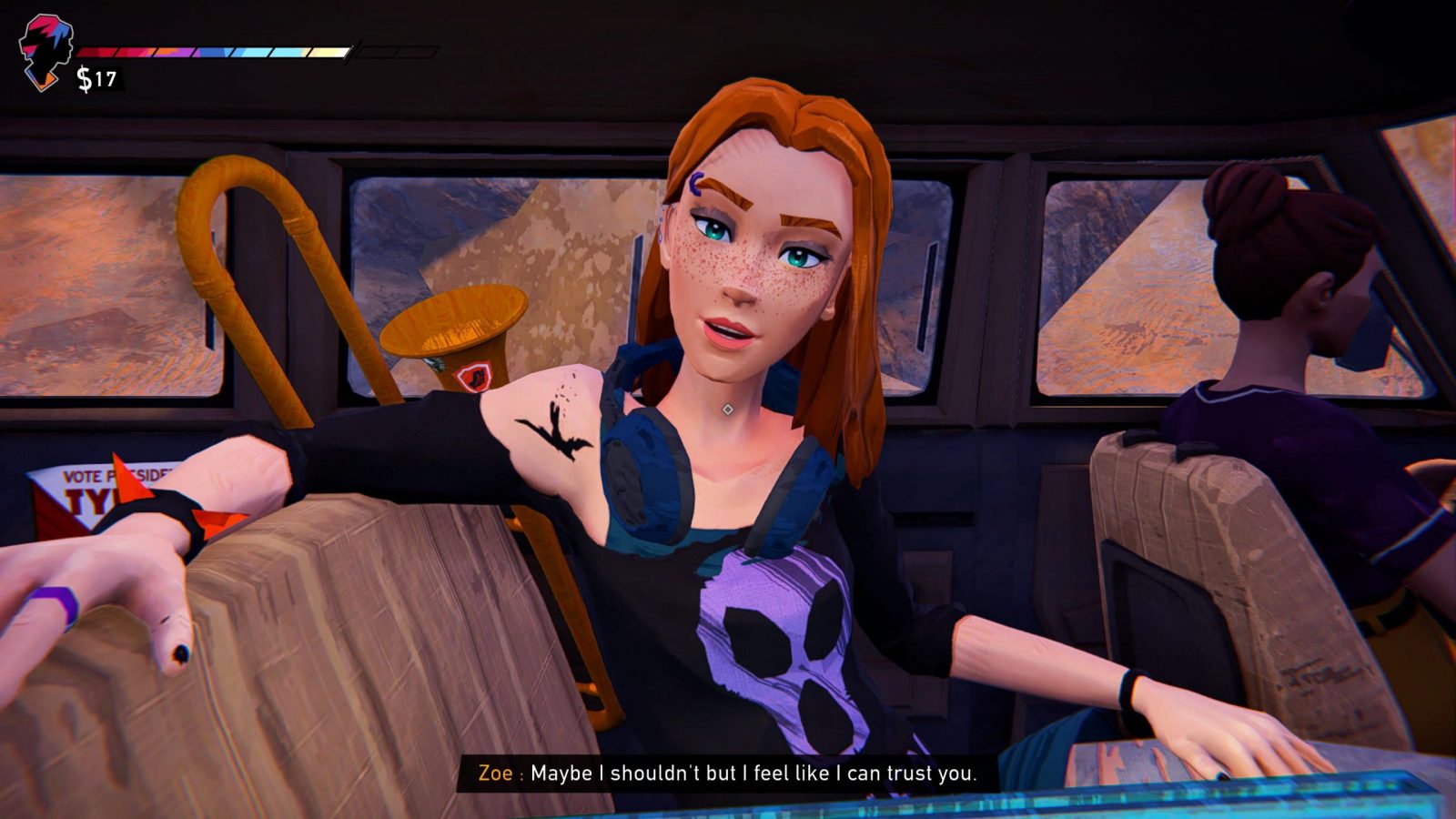 What would you do if you were forced to flee your country? The fascist dictatorship in control of Petria is kidnapping dissenting teenagers and brainwashing them through torture. As one of these young people yourself, you’re left with no option other than to leave home and try to cross the northern border. You’ll meet a ton of people in similar situations along your journey, do you help them or keep to yourself to have a better chance of crossing?

Road 96 is a deeply political game, which is something we don’t see terribly often in video games. You play as a teenager trying to cross the border, and can make several choices along the way which allow you to influence other characters and ultimately the ending. Originally released last year for PC and Switch, this indie title is finally arriving on PlayStation and Xbox consoles. It’s a unique experience well worth multiple playthroughs, and feels deeply relevant with the current political climate.

Road 96 is something of a rogue-like survival game, albeit with a focus on story. Taking place in the summer of 1996, each run sees you take on the role of a teen in the months leading up to the election. A playthrough consists of about 6 runs, with the amount of events you encounter along the way depending on how far away you start and how you choose to travel. There’s a segmented health bar at the top right of the screen, and while walking along the road can use three segments, hitchhiking could only use up two or calling a cab may even allow you to rest and recover a bit. It’s a very simple survival mechanic, with everything represented by a single bar, but it works when each run only takes about an hour.

At each stop on your road trip, you’ll encounter one of the game’s seven characters. Each character has their own set of events and problems. For example, the robbers Stan and Mitch are trying to find out who’s going to kill the Fox News equivalent host Sonya, while Fanny is a cop wrestling with trying to do her job and doing what she thinks is right. The small cast is endearing and while the voice acting is far from stellar, their weird speech patterns somehow makes me like them more. Especially once you see an event that connects two or more characters or develops their usually tragic backstories. You can see the completion percentage for each character in the bottom right on loading screens, so you’ll want to do a full playthrough more than once to see everything. 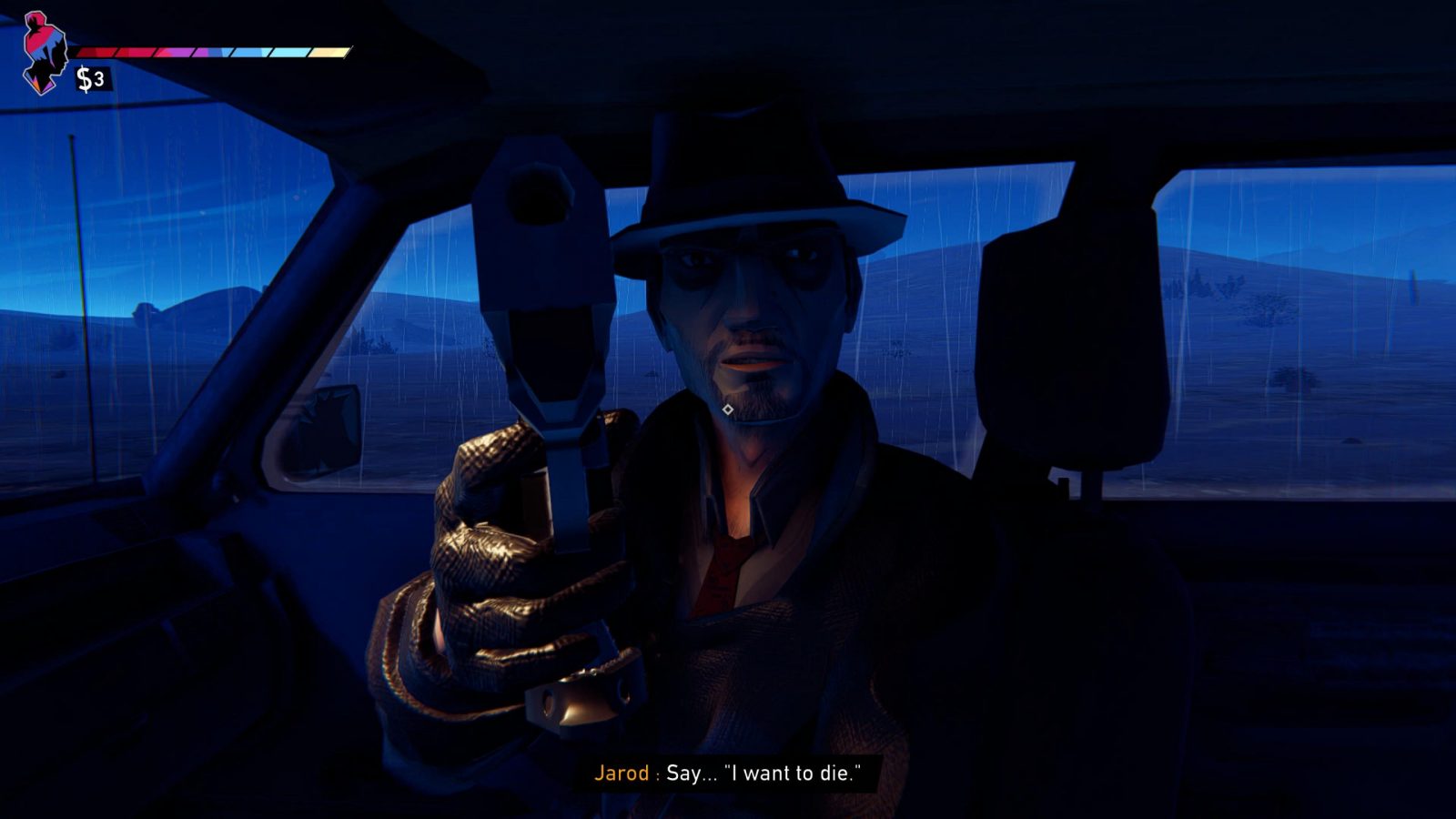 While you can somewhat influence what characters you see with their usual methods of transportation, it’s still largely random aside from at least one main story event each run. These usually involve Zoe, who’s essentially the main character. While it’s cool to see what happens to her and her opinions based on previous runs, on repeat playthroughs when I’m just trying to finish the rest of the cast’s stories and get the remaining perks it can be annoying. If you want to see everything the game has to offer, you’ll be replaying events a few times thanks to these story events and just some bad luck. It’d be nice if there was a way to prioritize unseen events, but thankfully you can make different choices in each scenario so there are at least a few new things to see.

What you see and do can vary wildly. Some events are simple conversations with one of the main characters, while others can have you braking into a building, shooting of road pirates with a nail gun, or even searching a motel for suspected terrorists. They’re all fun to engage with and make choices in because they don’t overstay their welcome, the game is short and benefits from a variety of short activities. Certain events will also reward you with permanent perks that carry over between runs and New Game +. These can unlock new dialogue options or open up new interactions in the environment like being able to hack electronics, pick locks, or simply being more lucky with dice rolls. It makes it feel like you’re still progressing when you start from scratch each run. 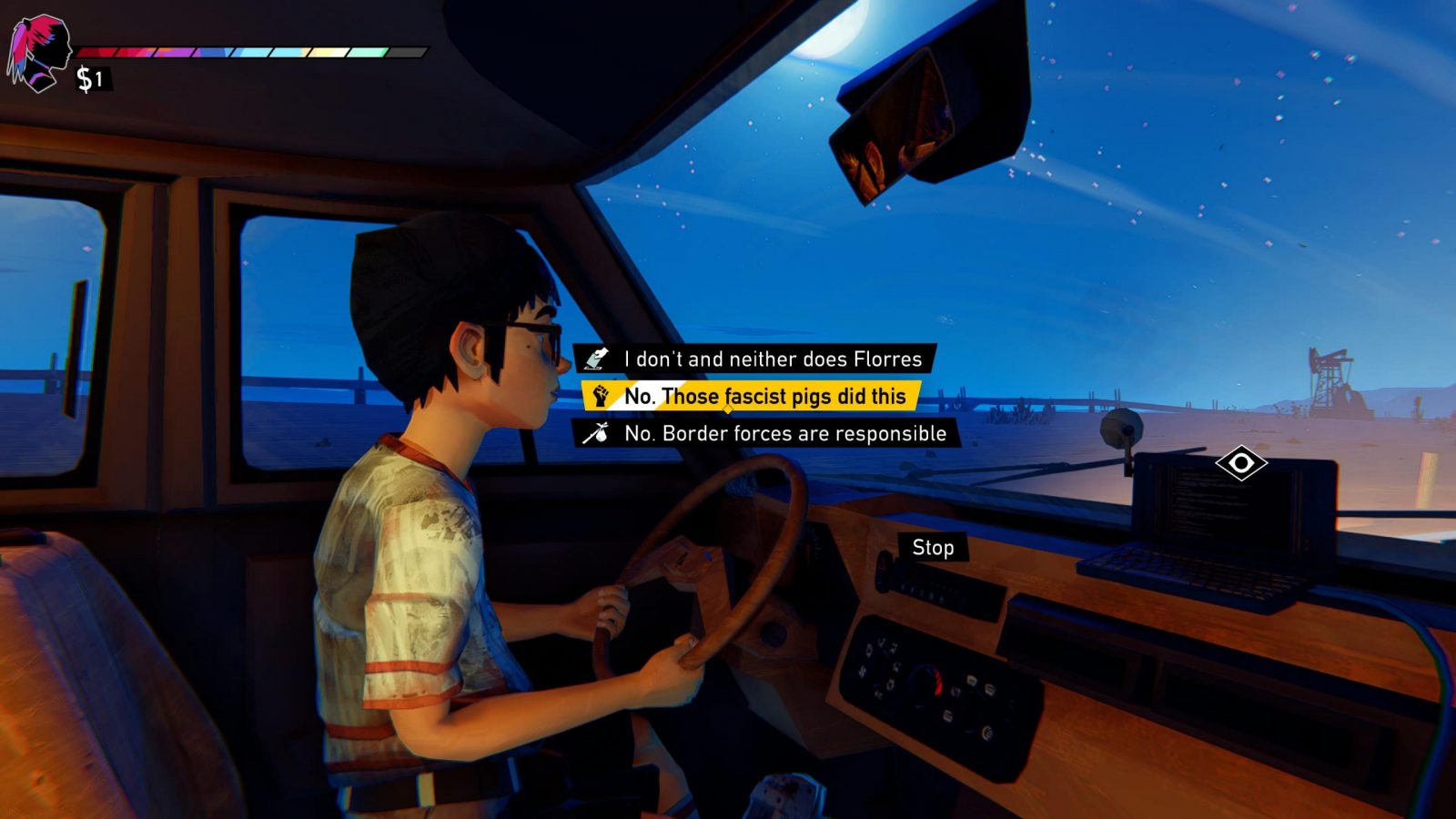 While it’s pretty clear where the game stands politically, it can be disappointingly vague in specifics. The current president, Tyrak, is obviously a fascist, but it’s never brought up what his opponent in the election, Florres, is running on, which brings us to the three stances you can take in the game. You can choose independent dialogue options, where you don’t really care what happens to Petria, favor voting, which encourages people to vote for Florres, or choose revolution and side with the Black Brigades trying to assassinate Tyrak. I flip flopped between voting and revolution, ultimately siding on the latter because I had no way of knowing if Florres would actually change things. I don’t need to know if she supports universal healthcare or anything, but being a bit less vague on her stance would have helped decision making feel more concrete.

Taking place in the mid 90’s, Road 96 fits that aesthetic to a T. The visuals are colorful, a bit lower poly, and the music feels like it came straight out of that decade with tons of synths mixed in. It looks and sounds great, aside from the voice acting. While it can be charming, especially with Stan and Mitch’s incredibly out-there pronunciation, it does fall flat in some more emotional moments. Everyone just sounds a bit too deadpan, especially Zoe. Still, if that doesn’t put you off, Road 96 is a great ride.

Road 96 is a politically charged piece of interactive art. Its themes of opposing fascism are depressingly relevant and conveyed through charming and funny characters. While the voice acting leaves a lot to be desired, this is a trip well worth taking over and over.

David is the kind of person to wear his heart on his sleeve. He can find positives in anything, like this is a person who loved Star Fox Zero to death. You’ll see him playing all kinds of games: AAAs, Indies, game jam games, games of all genres, and writing about them! Here. On this website. When not writing or playing games, you can find David making music, games, or enjoying a good book. David’s favorite games include NieR: Automata, Mother 3, and Gravity Rush.
Related Articles: Indies, Road 96
Share
Tweet
Share
Submit