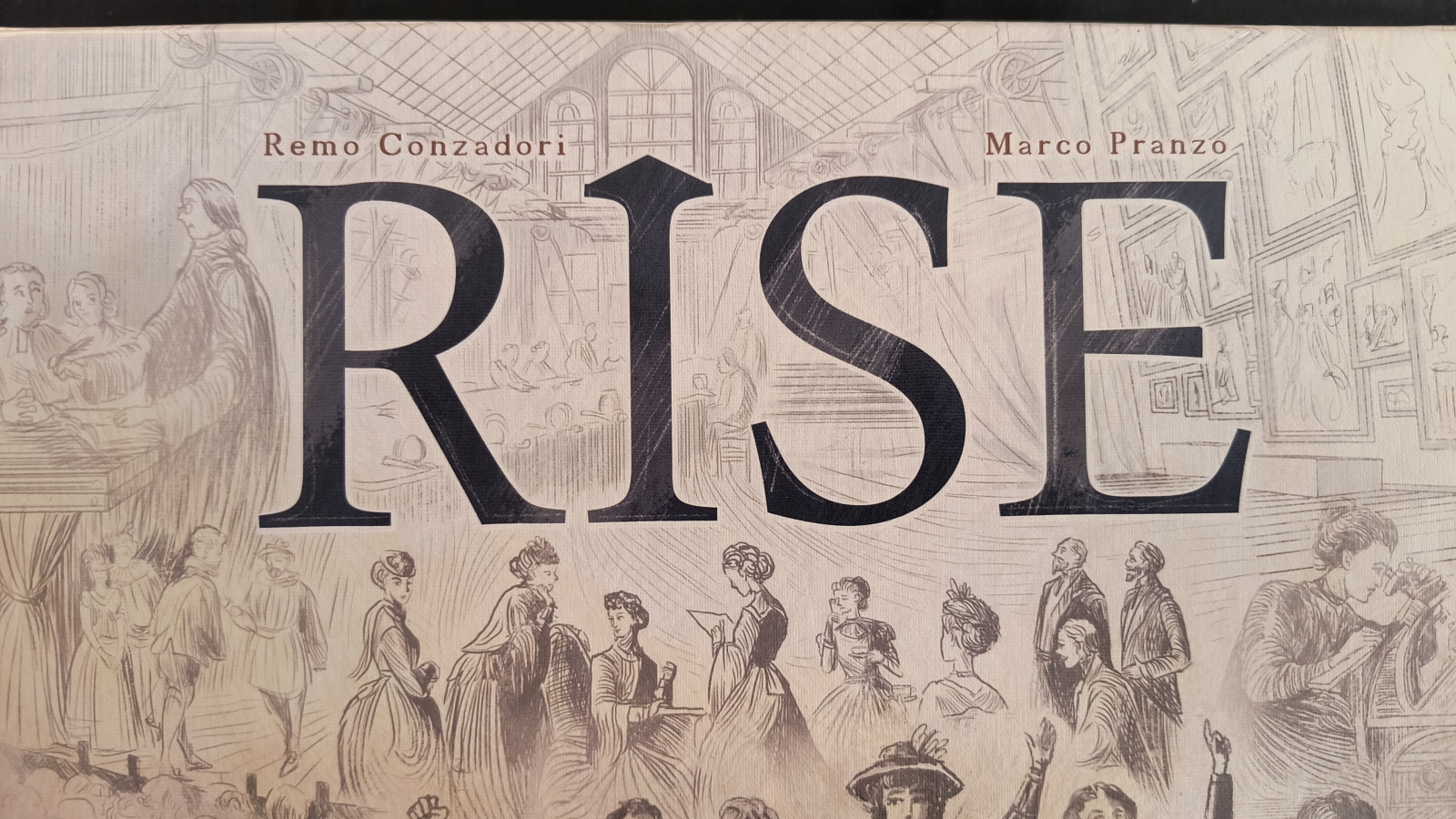 Rise is a board game about tracks.  No, not railroad tracks, though it is a game set in the industrial era.  We’re talking about progress tracks.  The game has 12 in all, and the way they interact is, surprisingly, quite interesting.

Rise puts players in the shoes of aspiring industrialists during the Industrial Revolution. Up to 4 players compete to have the most points, earned by increasing their status on the aforementioned tracks.  There are 3 core tracks (politics, science and culture), 3 economic tracks (industry, banking, and bureaucracy), 2 status tracks (popularity and environment), 2 others (education and press), and finally a victory points track.  Each space on these interacts with other tracks and other parts of the game, except for the victory points track. 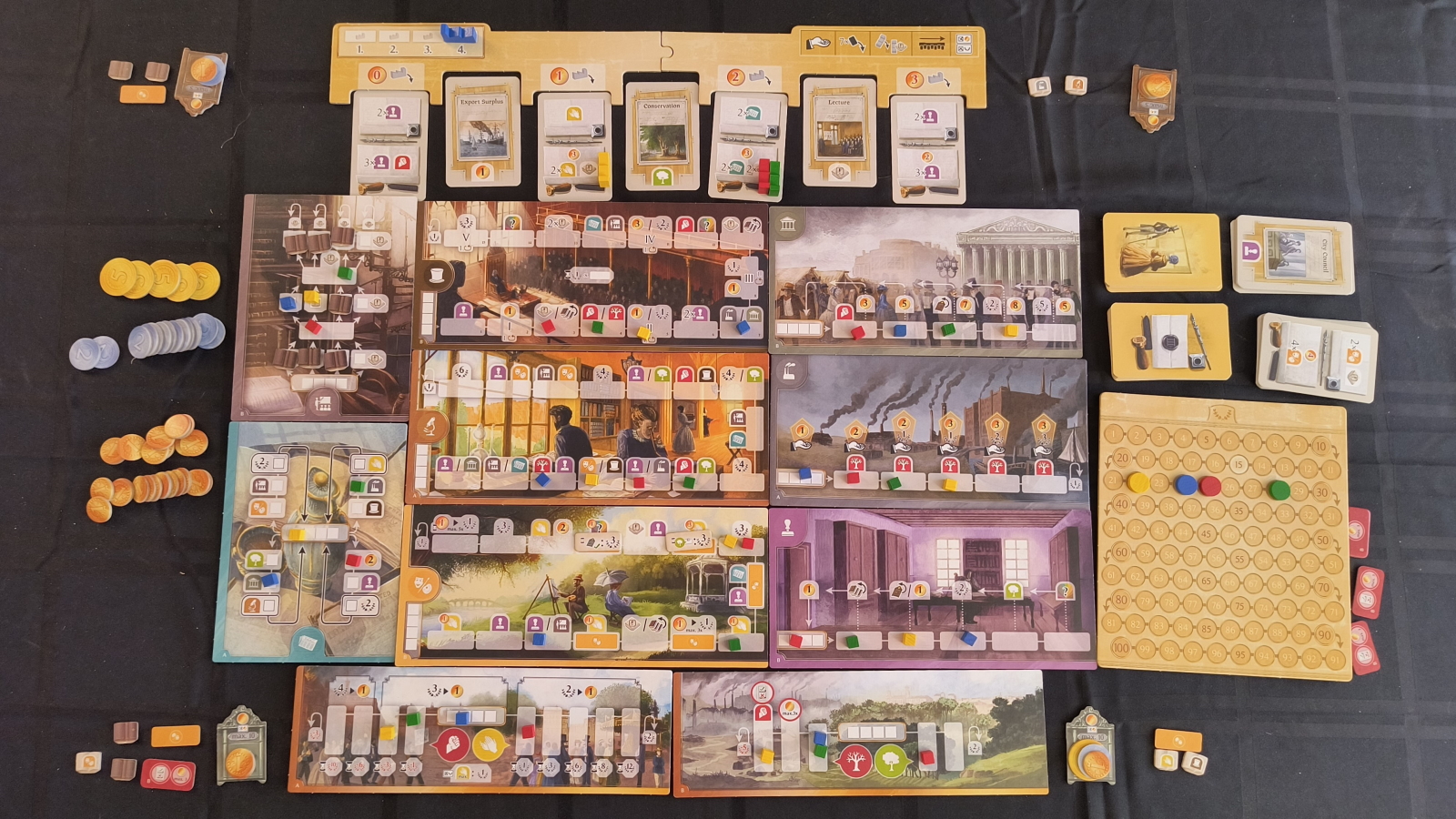 How do you move on these tracks?  Well, each round, 4 action cards will be made available, interspersed by 3 event cards.  It goes action, event, action, and so on.  The further along the track the action card is, the more expensive it is to take, but the more events you get to participate in.  You can pay 3 bucks to take the 4th action card, and you also get all 3 events along the way.  Or take the first action card, and get no events.  You also need to pay attention to the players who went before you, because if you take a spot they have already selected, that player might be able to take a bonus action (received from the education track).

Once you’ve chosen your action card, and players have taken their extra moves if they get any, then the actions and events play out from left to right.  On each action card, however, are two different choices.  One is always free, while the other is an upgraded version with a cost.  The best way to ensure victory is to always have enough money to take the better action.

Every action in the game involves moving up one of the tracks.  When you move up on a track, you take an action every space along the way.  Most of those actions involve moving up on yet another track.  On the very best turns, you might get to move up 4 different tracks by moving one or two spaces on a core track, or comboing actions together to rocket up a single track 4 or 5 spaces. 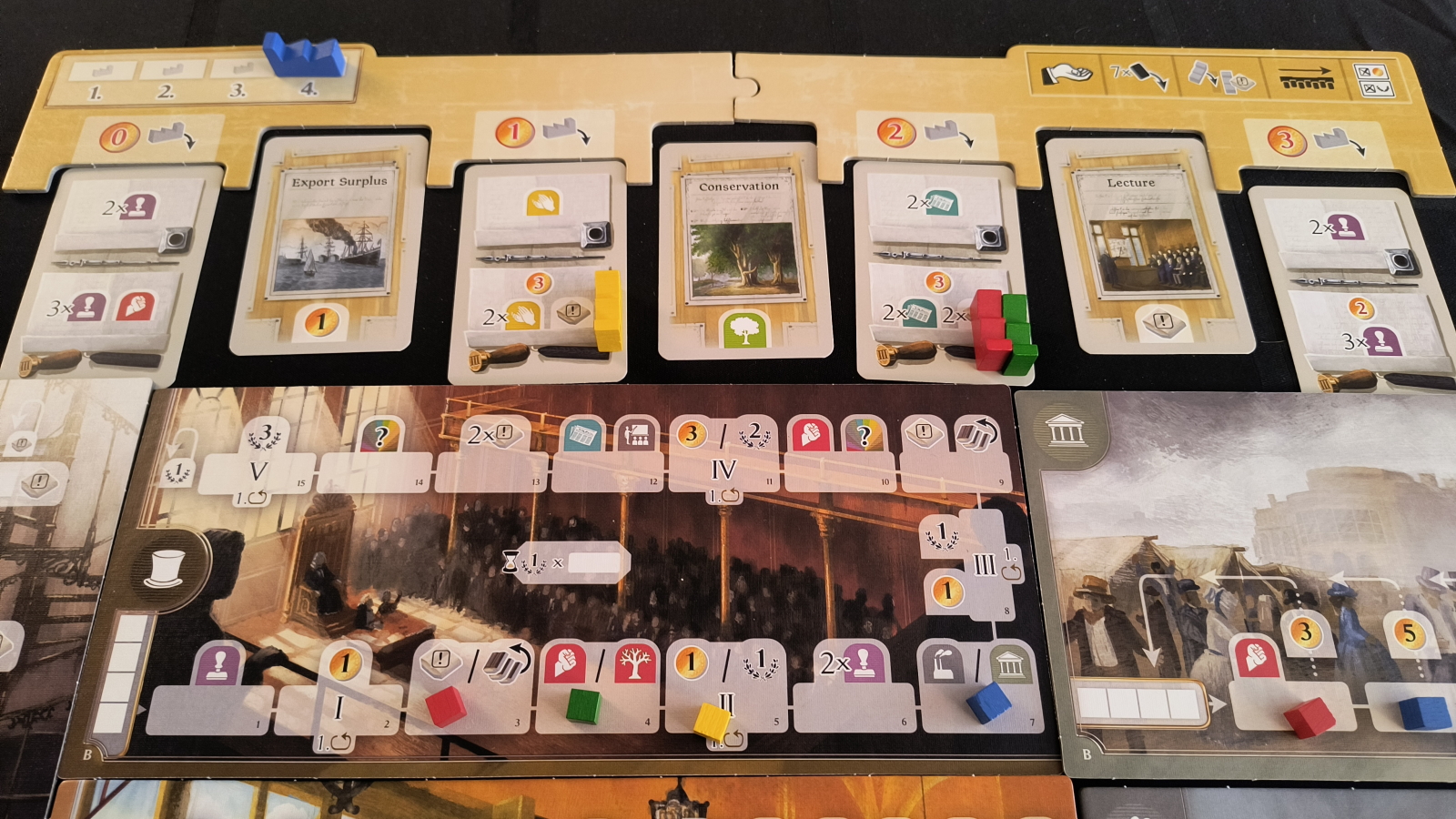 This can be where the game falls apart a tiny bit.  How do you track (aha) how many spaces on a track you get to move up?  Say you go 3 spaces on a single track, but the reward on the first space you move to sends you up another track, that then moves you up the first track again.  Then you move up again, which earns you a bonus action, which happens to be the same track again!  While it doesn’t necessarily take a genius to figure it out here on paper, 5 spaces total, in the moment it can lead to missing steps or making too much progress.

The theme also feels pretty weak.  Rise offers an intriguing idea of creating an industrial city.  However, despite it all, I don’t really get a feeling of progress.  Just points, as ephemeral as the wind.  So what if your industrial track is maxed out, and your environmental track is at its lowest point, the only thing it costs you is your bonus actions and some points at the end of the game.  There is very little life to the game.  You can say “I maxed out my culture” or “look how environmentally conscious I was,” but in the end it doesn’t feel much different than going down another track.  When it’s all over you don’t have an industrial city, just the balance sheet for that city.

An interesting way to take a common board game element to the extreme. If you like progress tracks, definitely the game for you. However, at the end of the game, you don't really feel like you've accomplished anything.