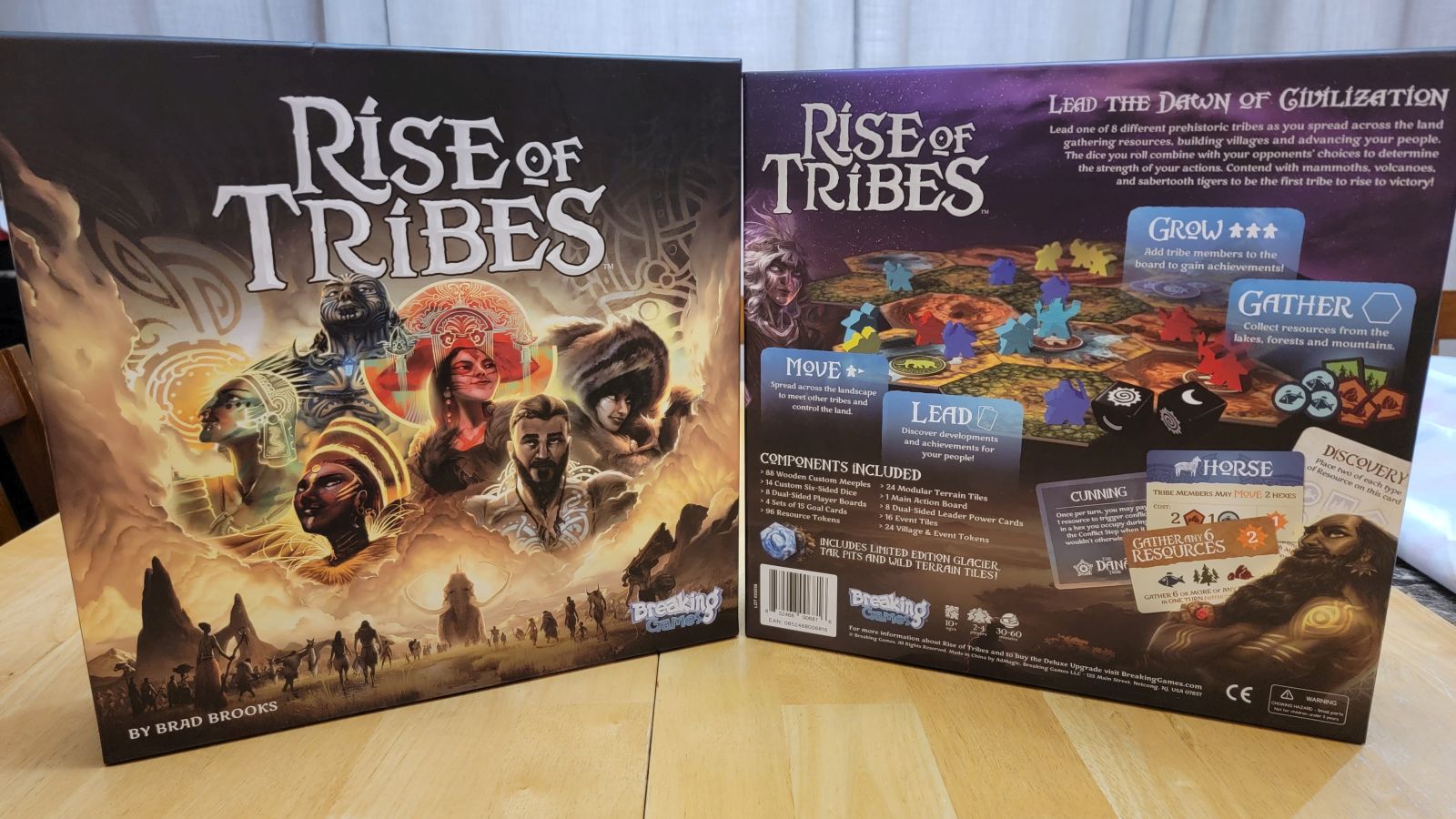 There are a few styles of games that I typically do not enjoy. It is not that these games are bad, but typically I do not gravitate towards entries that make people feel like they are being bullied. I also just do not care for nonsense in board games. What I mean by nonsense are instances that occur during a game that absolutely do not belong in a gaming experience. Case in point, once upon a time playing a social deduction style game I got singled out because I chose one pizza joint over another, which again had nothing to do with the game. That being said there are plenty of exceptions to this and when an exception is found it is only fair to add to my shelf and play it a considerable amount.

Enter Rise of Tribes, created by Brad Brooks and published by Breaking Games, asan odd, stand out of sorts for me. There are plenty of games that fill an area control game slot for me on my shelf, but I suppose there is always room for more. So why does Rise of Tribes stand out? There are more than a couple of reasons and for that specifically Rise of Tribes is here to stay on my shelf. For a game that has area control components, it does not feel at all like a game where people suffer and get beat up on. 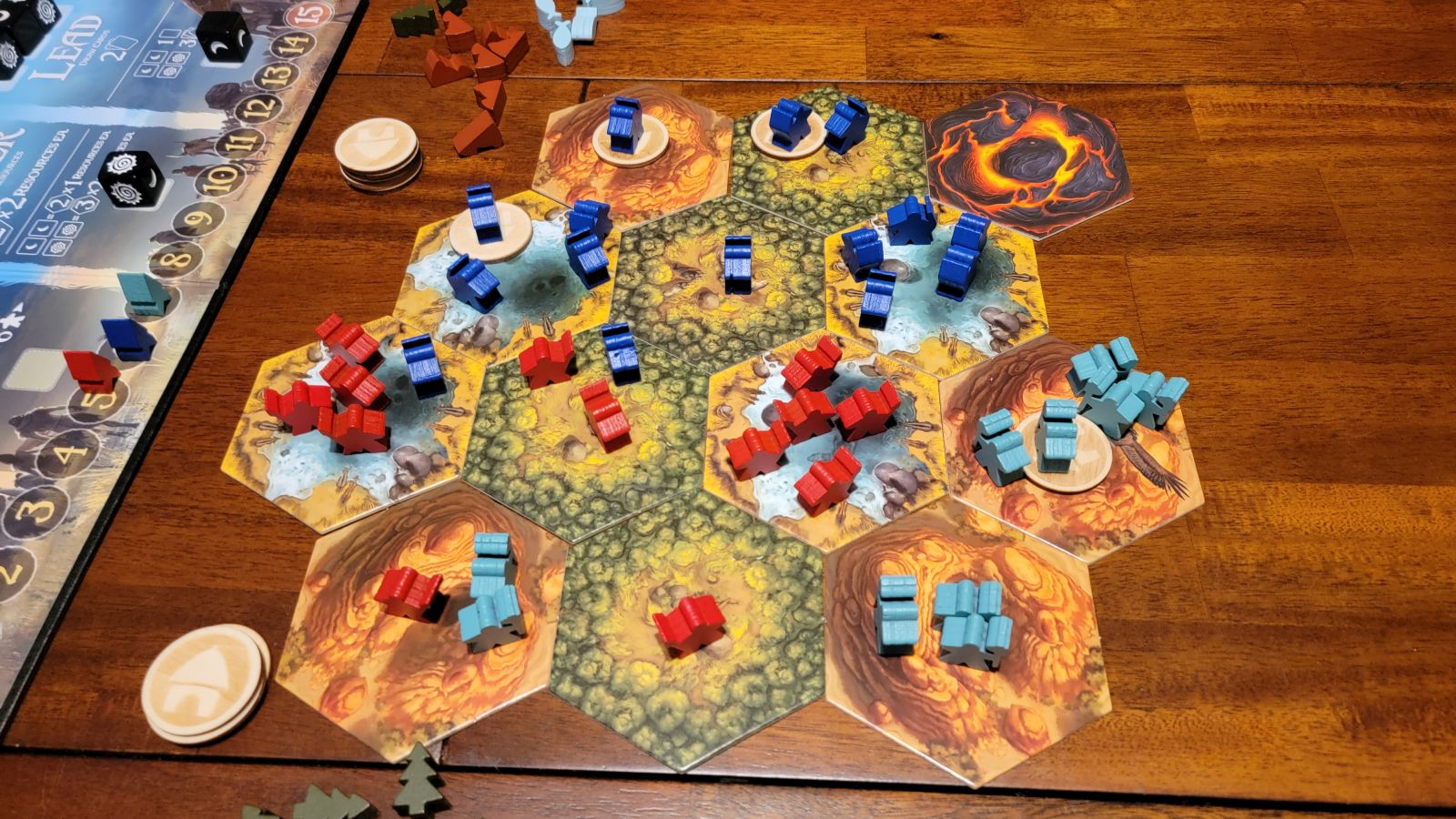 So, in Rise of Tribes a game can have 1 to 4 players and will play in about an hour and a half. Player count dictates the size of the map and also how many of each area tile are used. Players start in a hex of their choice and play begins from there. What is neat, and kind of cool is in Rise of Tribes there is an action board that has four choices on it. These four actions are the driving force of the game and provide the depth and strategy of what actions to use when and how to use them to your advantage in order to keep your opponents from benefiting from stronger actions.

Here the main part of the action mechanism requires players to roll two dice that are not slotted in anywhere on the action board. Then based on the faces on the dice the player slots a die into an action bumping off one of three dice already slotted into the action. The active player then takes that action and based on which sides are face up on the three dice slotted into the specific action adjusts the strength of the action up or down. Being that there are three different outcomes of the die when rolled actions can either be standard, become weaker, or become stronger. It is here that if you roll a blank then typically you have access to standard actions. Moon symbols give you weaker actions when there are two or more moons visible, while Sun symbols strengthen your actions if there are two or more visible. 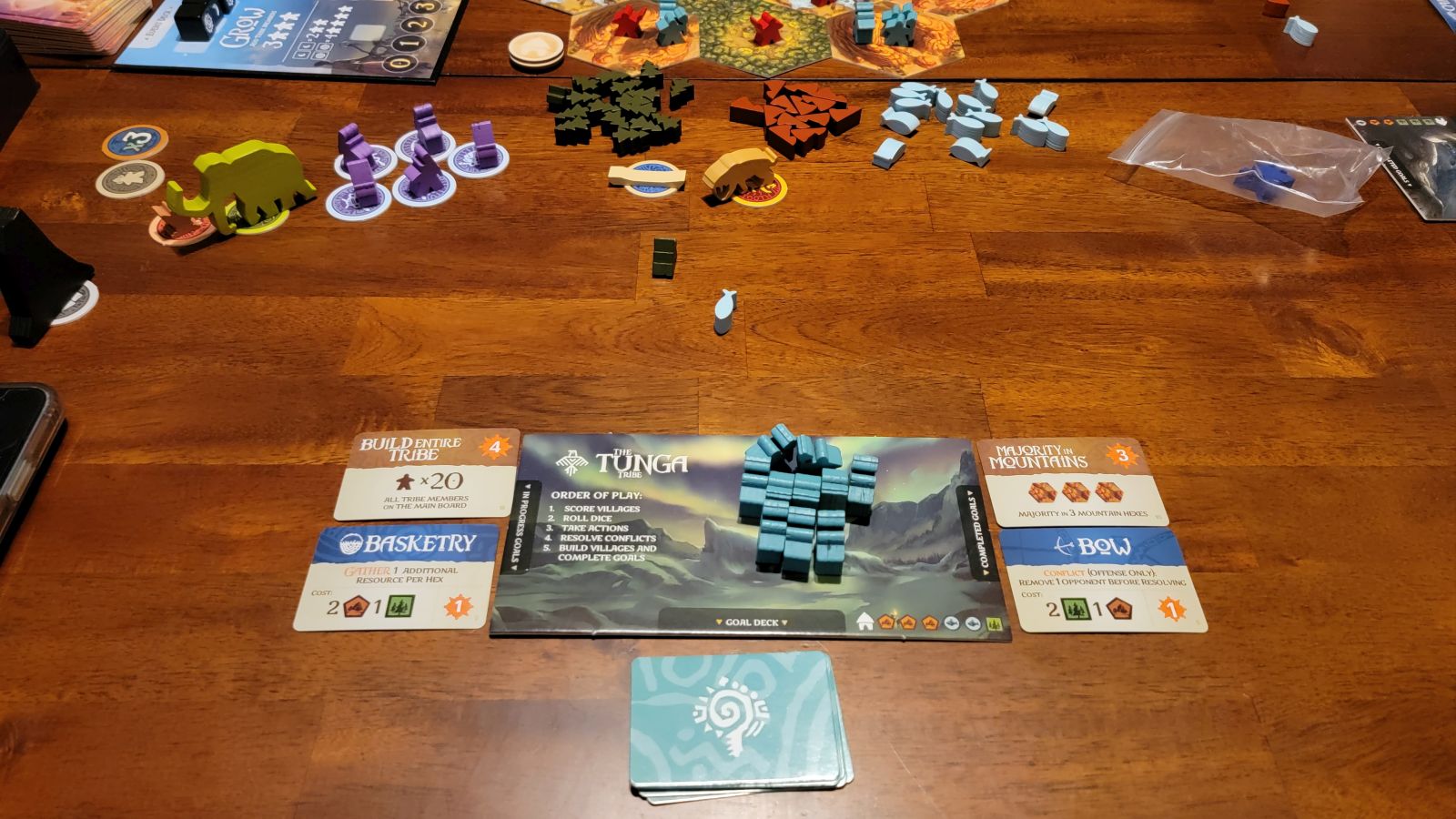 Across the four actions, Grow, Move, Gather, or Lead, each player will ultimately affect the strength of the action for the next player all the way through the end of the game. With this understood a typical turn in Rise of Tribes involves taking two actions. This involves placing more of your tribesmen on the map(Grow), moving your tribesmen around the map(Move), gathering resources from multiple hexes(Gather), and drawing cards from your own personal deck(Lead). After two actions are taken then players check and resolve any conflicts that have occurred. Finally players will build villages and complete goals.

There are a few things here to unpack. First, conflicts occur when more than five tribesmen are in the same hex regardless of which player they belong to. Next in turn order, one by one players remove tribesmen from hexes until either all tribesmen are removed or there is one tribesmen left on the hex, meaning that player had more on the hex to start or moved more in to overpower the player originally in a hex. So instead of your typical battle for area control type mechanisms, here we get players needing a majority to have/keep control of hexes after a conflict. 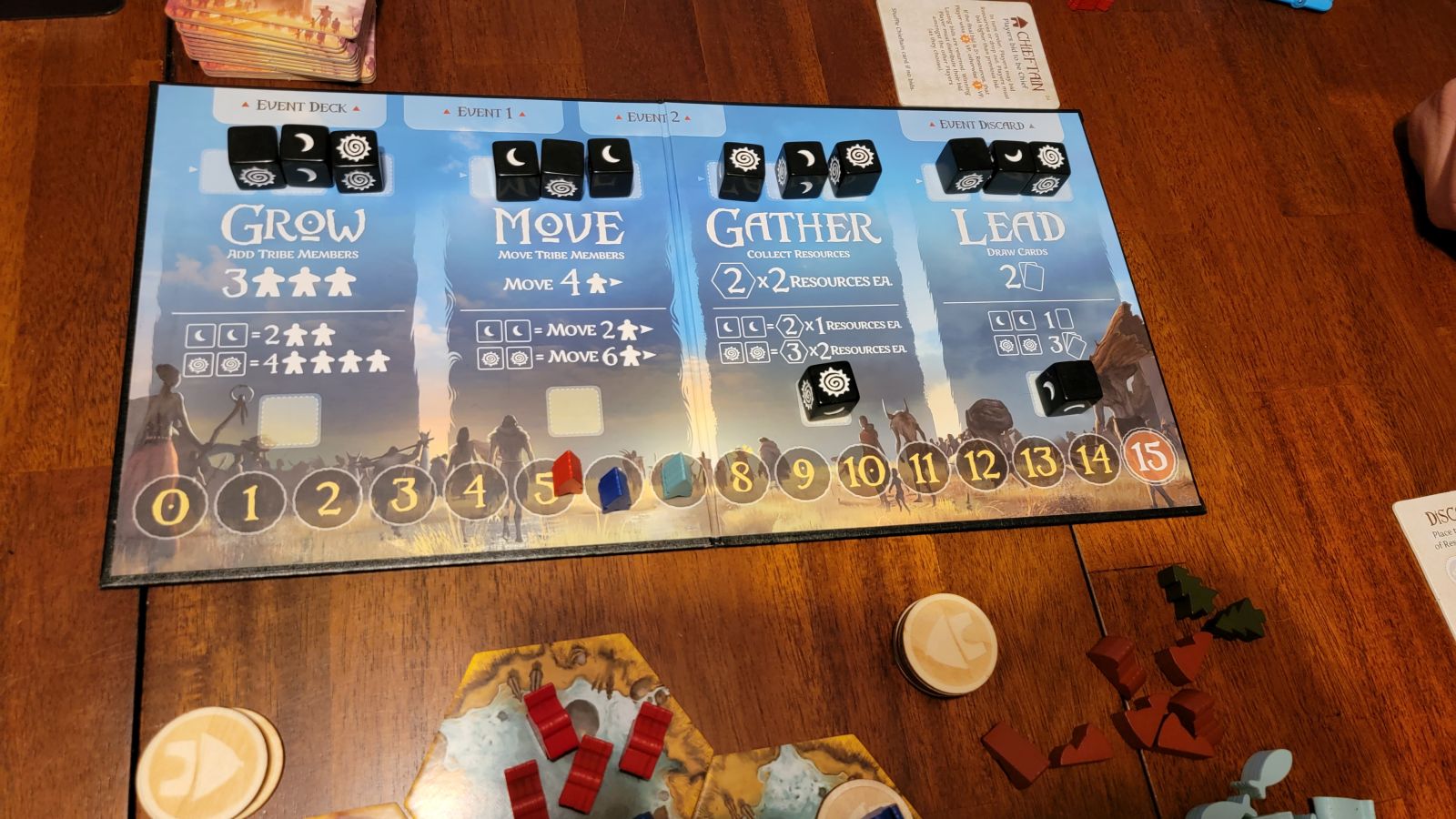 Next is the lead action. Leading allows players to draw one, two or three cards based on strength of the action. These cards are goals that either give players bonus abilities or or action as missions to work towards in order to score points. These points here are how the game flows and ultimately ends. When one player reaches 15 points the game ends and that player is declared the winner. Points also get scored by players that have built villages and if those players have villages alive at the beginning of their turns, not unlike upkeep except in this scenario you score points for each village you have built that is still alive. Here is where players want to move into territories with others and force them to lose tribesmen and villages or else they risk players running away with the game. 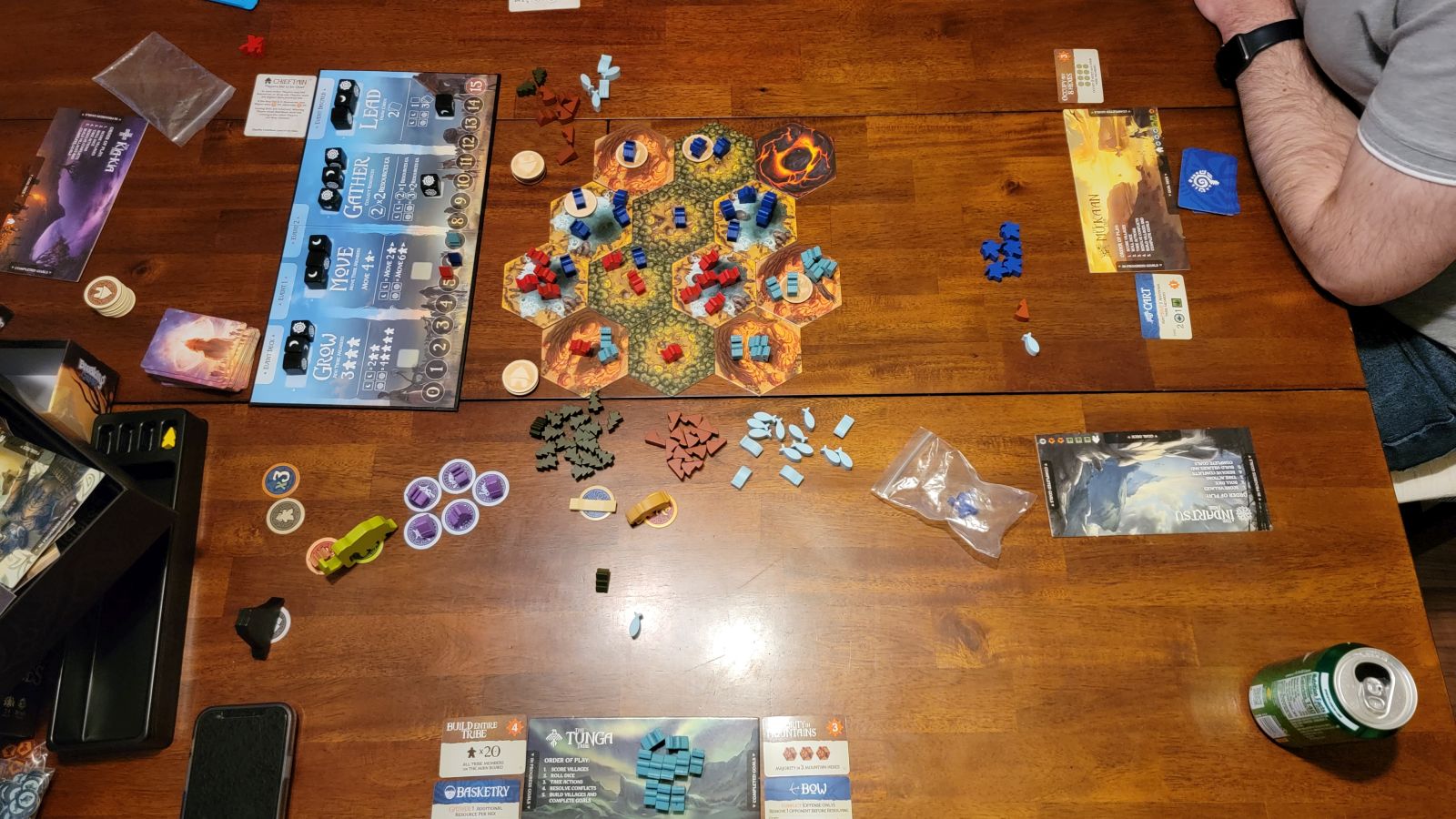 Rise of Tribes seemed okay on the surface, between components that were pretty cool, to a nice organizer built for the box to accommodate all of the components nicely. There was even a spacer/cardboard cut out piece that is a placeholder if someone wishes to upgrade the cardboard pieces to the nice wood pieces available. That box fits nicely inside the main box where the cut out previously was. The components are nice and durable, the game has a fairly small table presence compared to most, and it plays pretty darn quick for all the moving pieces it has. Seemingly, the game looks like it will take quite a while, but the 15 point end game condition and the limited amount of actions keeps players moving along without the struggle of analysis paralysis. About the only place where players might struggle with something taking a long time is the best place to utilize their dice on the action board which all players share. Here is where the game does suffer a bit as the actions are highly dependent on what you roll and bad rolls can result in a not so fun game experience.

At the end of the day, Rise of Tribes plays quickly, concisely, and has a great aesthetic to it despite the box art being fairly bland. That being said Rise of Tribes plays in such a quick manner getting multiple plays of the game in during a gaming session is an easy feat, and helps anyone who might have a feeling of “that ended too quickly” move on from that and vye for a win in the next game. Rise of Tribes by Breaking Games clearly has more than meets the eye to offer, and challenges players to rise to the occasion.