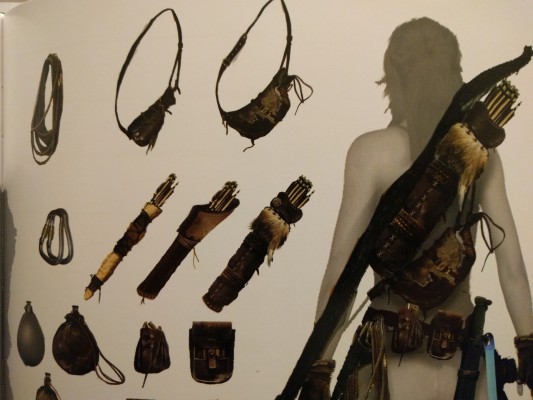 When the Crystal Dynamics team tackled Rise of the Tomb Raider they knew that they wanted to take the harrowing experience Lara endured in the previous title and build on it to transform her from survivor to the world-traveled tomb raider we all know and love. Serving as almost a second origin story, the game would allow Lara to grow, rise, and eventually thrive despite the harsh conditions she once again found herself in. It was easily one of the most anticipated games of 2015 (and rightly so, as you can see in our written and video review), but today I got my hands on a bit of the source material — the Official Art Book.

Brenoch Adams (Art Director), Brian Horton (Game Director), and Noah Hughes (Franchise Director) provide the forward and introduction for the 192-page hardbound book from publisher Titan Books. Andy McVittie and Paul Davies, both veteran Editors for art books for games including Assassin’s Creed Syndicate, Assassin’s Creed Unity, Watch_Dogs, Titanfall, and Alien: Isolation, just to name a few, provide their skillful hands to once again bring incredible artwork to life. Interspersed with descriptions and anecdotes from the Crystal Dynamics team, this book is slightly different than those previous efforts I mentioned. But before we get to that, let’s dig into the substance in this outing.

The book is divided into three large chapters — Characters, Weapons and Props, and Locations. As the game is very character and location-driven, the weapon chapter ends up being a comparatively short chapter. In total, over a dozen characters get the royal treatment, as do fourteen locations. Given the dangerously snow-covered and icy nature of the vast majority of the content we’ve seen prior to the launch of the game, I fully expected that this book would be filled from cover to cover with white landscapes. Naturally, the game features a wide array of locations, each with a great deal of detail and beauty. Some of the locations are downright serene as nature overtakes abandoned facilities and debris.

The most striking example of evocative artwork in this book comes courtesy of a section around a moment where Lara ends up deep in a Byzantine ice cave. The caves are dangerous not due to predators or traps, but simply from the decaying effect of time. Long drops are punctuated at the bottom by sharp ice chunks, and the erosion on every building surface threatens to break, dropping Lara to her doom. It’s a great juxtaposition between beauty and death that could be an allegory for Lara’s dangerous obsession/profession.

By the time you see this, it may be far too late.

I mentioned that this book is slightly different than previous efforts from Titan Books, and that’s almost immediately noticeable. Every page is now annotated with the name of the artist behind the work on that page, giving credit where credit is due. Also, each chapter now warns that if you’ve not beaten the game you’ll likely run across some pretty serious spoilers if you proceed. There is also a heavier emphasis on evolutionary concept work, showcasing the iterations between character designs, potential puzzles, and even how Lara might tackle and down an opponent from stealth. With the upgraded crafting system, there is a greater emphasis on the assets Lara might craft or collect in the field, showing the evolution from what amounts to a hunk of birch and a string all the way to a heavy compound bow. Pickaxes, arrows, rifles, pistols, and shotguns also get the royal treatment, showing a range from the well-maintained to the held-together-with-sticks-and-tape level of disrepair.

Murals are a big part of the narrative in Rise of the Tomb Raider, so as you might imagine, there is an emphasis placed on them. The team did a fantastic job of replicating the well-worn historical pieces of art from various regions in the world. The Byzantine murals look like they could have been snapped straight out of an antiquities book that Lara herself might have owned.

Finally, a return to puzzles and tombs!

In every art book I review, I usually find one piece that sticks with me long after, and this artbook is no different. There is an optional tomb that has Lara scaling a Byzantine ship that found itself shipwrecked after attempting to traverse a shallow river. The ship is oriented in a very unnatural vertical position, making it even more dangerous than it otherwise would be. The in-game puzzle isn’t overly difficult, but this piece of art is a fantastic showcase of talent.

Rise of the Tomb Raider: The Official Art Book

With incredible artwork from the 32-person strong Crystal Dynamics art team, this book is a marked improvement over the already-strong offerings from Titan. The new annotations help recognize the artists responsible, and the focus on evolutionary concept progression makes it even better. This book is a must-have for any Tomb Raider fan.

Ron Burke is the Editor in Chief for Gaming Trend. Currently living in Fort Worth, Texas, Ron is an old-school gamer who enjoys CRPGs, action/adventure, platformers, music games, and has recently gotten into tabletop gaming. Ron is also a fourth degree black belt, with a Master's rank in Matsumura Seito Shōrin-ryū, Moo Duk Kwan Tang Soo Do, Universal Tang Soo Do Alliance, and International Tang Soo Do Federation. He also holds ranks in several other styles in his search to be a well-rounded fighter. Ron has been married to Gaming Trend Editor, Laura Burke, for 21 years. They have three dogs - Pazuzu (Irish Terrier), Atë, and Calliope (both Australian Kelpie/Pit Bull mixes).
Related Articles: Rise of the Tomb Raider: The Official Art Book
Share
Tweet
Share
Submit