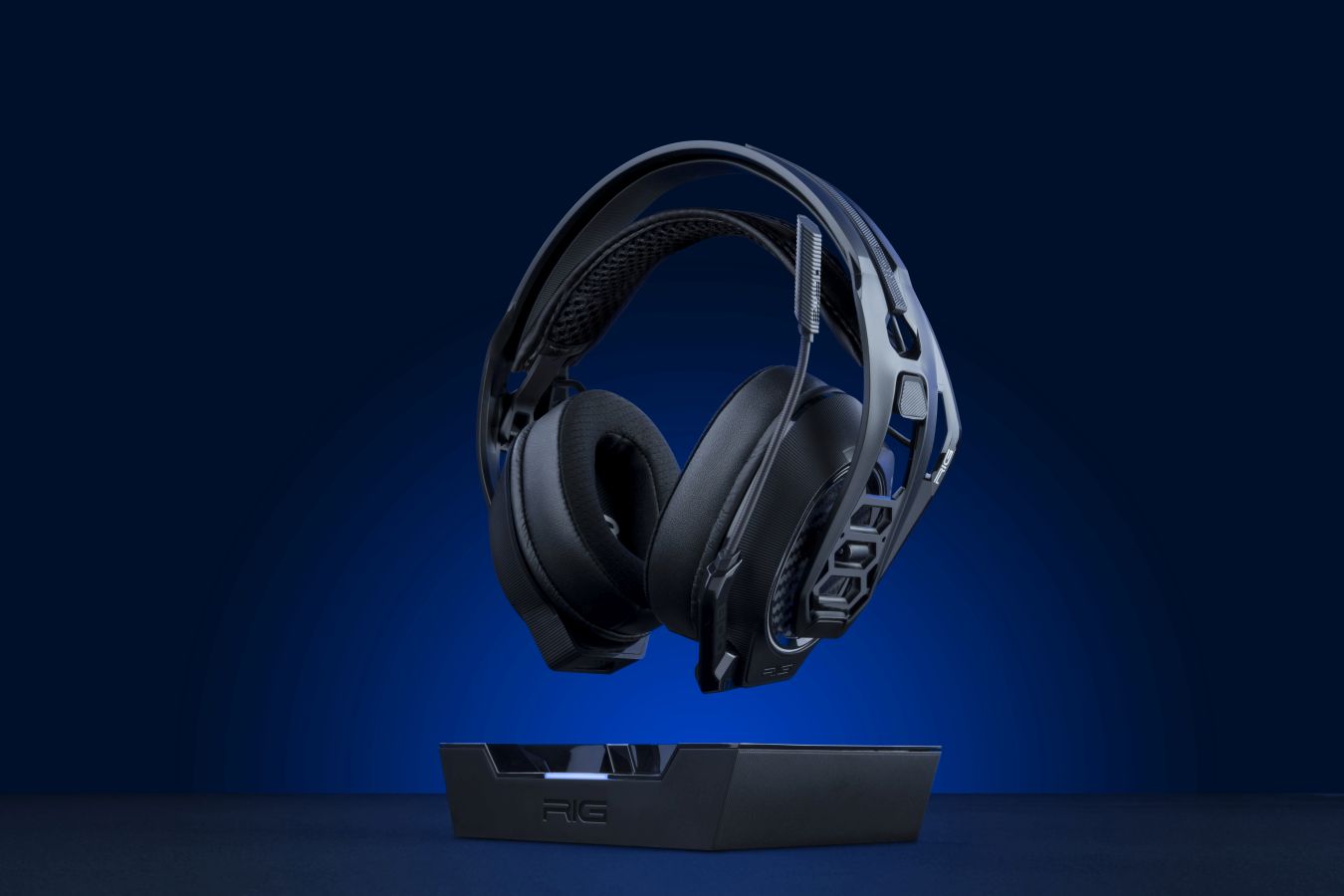 Let me first apologize for the terrible pun, but I do stand by it. The RIG 800 Pro is now here, and available in an Xbox, PlayStation, and soon a PC model. As many know, I use a lot of different accessories, and I’ve been on a run talking about gear over the last couple of months, and Nacon has added yet another with the PlayStation model of the 800 Pro (the HS version which we’re reviewing). I really could start and end this one with a “Will it Call Of Duty”, another thing I do a lot of, but with the RIG 800 Pro surpassing my expectations it certainly deserves more of your and my time.

Without further ado, let’s jump into the box! Inside you’ll find the aforementioned RIG 800 Pro, the USB wireless dongle, a wireless charge base, and a micro-USB charge cable. The charge base works several ways in that it can function as only a charging station, but to save USB ports you can plug the wireless dongle into it. The base itself is very pleasing to the eyes, and allows you to place the headset standing up on it to charge it which works with aplomb. I’ve not had any issues with setting it onto the station and having the headset topple – the fit is perfect. 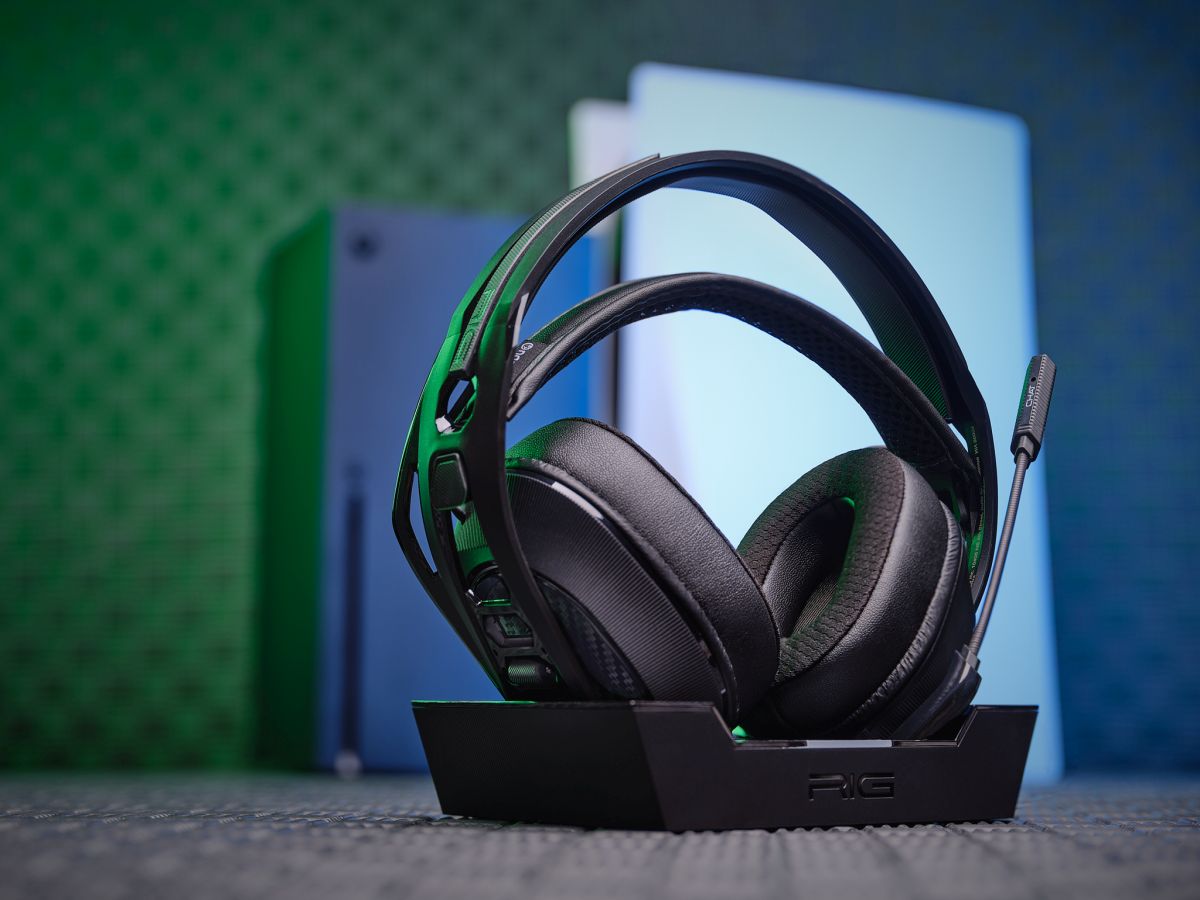 With that out of the way, let’s talk about the actual headset. The RIG 800 Pro features two very comfy earcups, with the outside a faux-leather and what rests on your ears a surprisingly plush fabric. One of my biggest issues with headphones is heat; that uncomfortable burning sensation some have on your ears or the top of your head after a while, but the RIG’s don’t do that at all despite my worries given the construction. In fact, I’ve put in multiple hours of Call Of Duty on multiple occasions with these, and they’ve stayed cool the entire time. Along with these the plastic design of the headset frame shouldn’t work as well as it does; somehow feeling kind of cheap but being ridiculously durable. That’s not a knock on them in the slightest either, and I think it’s more a compliment of how light they are. The other design function that I’ve always liked with RIG headsets is the fabric ski-band that keeps the pressure off of your head, another win for the 800 Pros.

While comfort is incredibly important, how it sounds is equally important. The RIG 800 Pro features 40mm, low frequency resonator drivers, which is a lot of technical jargon to say they generally do lows and mids well while doing okay with bass-ey tones. I generally put these through a few tests, and that’s generally playing multiplayer, single player, and of course music. For multiplayer, I obviously played a lot of the third season of Call Of Duty: Vanguard (our impressions here), and I was pleasantly surprised by the intangibles the RIG 800 Pro offers. Not only does everything sound really good, the directional audio was sublime. Besides that, I was also able to turn on Dolby Atmos through my PC, adding equalization and Dolby’s expertise to the experience.

With single player, I focused on using the headset on the PS5, and to great results. I haven’t tried Vampyr yet, so I figured now was the best time to do so. This one is very story driven, with plenty of dialogue along with lots of atmospheric sound and a wonderful soundtrack in the background, and it all sounded fantastic on the 800 Pro. The directional audio is still a highlight (e.g. a character talking in a tent to my back left), and the RIG even utilizes the PS5’s 3D audio, which certainly adds to the value of it. Lastly, I used August Burns Red’s ‘Composure’ (one of my faves) in order to judge it off music and the entire track sounds amazing through the headset. Just based on audio performance alone, the Rig 800 Pro passes with flying colors. 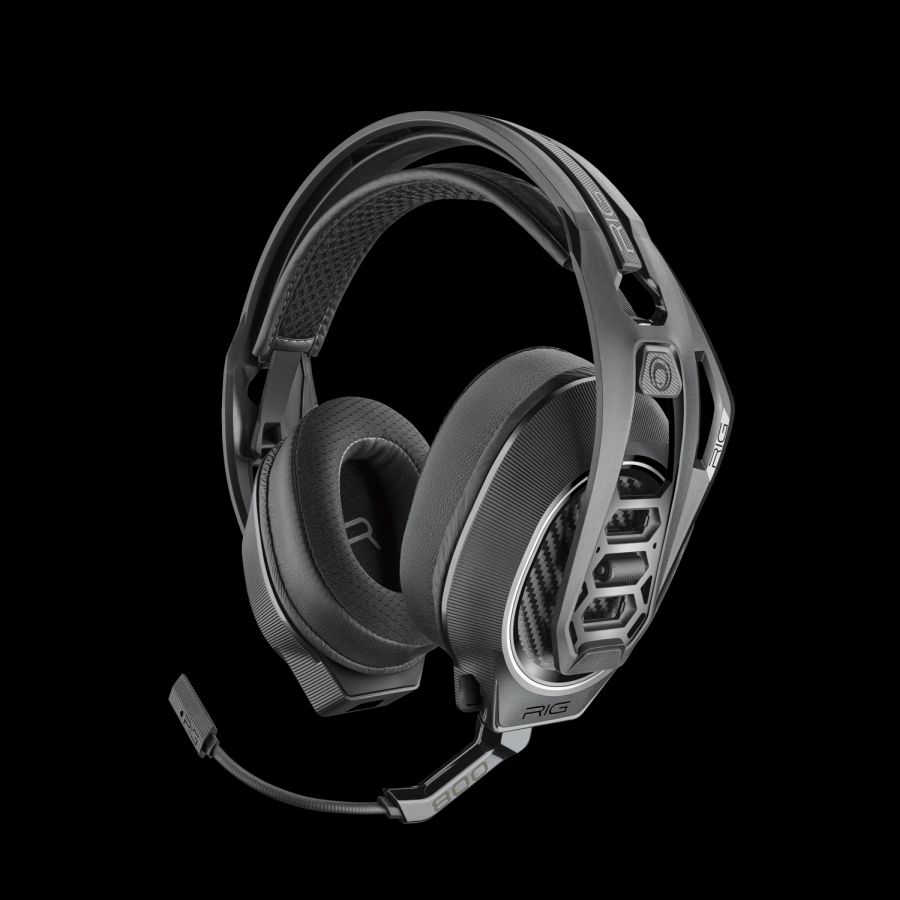 The other part of the audio experience with a headset is the microphone. I’ve gotten pretty particular with mine over the last little bit, mainly because I’ve moved onto using my Elgato Wave 3 mic which sounds incredible. You generally won’t end up with anything that crisp, I mean, you’ll pay almost as much for said mic as the RIG 800 Pro, but it doesn’t have much of a drop off all things considered. Talking with my teammates on how it sounded, doing some recording and playing myself back, all allowed me to make the determination that your call outs are going to be heard and it’s not too hot where you’ll start buzzing. It can be a bit low at times, but I was able to adjust the mic closer to my face to fix it.

What isn’t as great is the fact the charging is still behind the curve. Yes, I really like the dock, but it functions via a micro-USB cable and if you want to be more portable, you’re still stuck charging the headset with a micro-USB. It’s not necessarily a deal-breaker, but USB-C allows for much faster charging along with quick-charging, and I’m not sure the dock helps that be nearly as fast. With the dock, the only thing I don’t like about it is a lack of functionality outside of the charging and using it as your “dongle”. I would have loved to see some sort of “mix-amp” ability from it, and though that may add to the price, you’d just like to see it operate as more than just a dock. In any case, it feels inexcusable to be using anything other than USB-C charging in 2022, and I’d be fine without the dock if I had that. On the plus side, the RIG does sport a 24 hour battery, and I’ve never once felt the end of it during a gaming session. 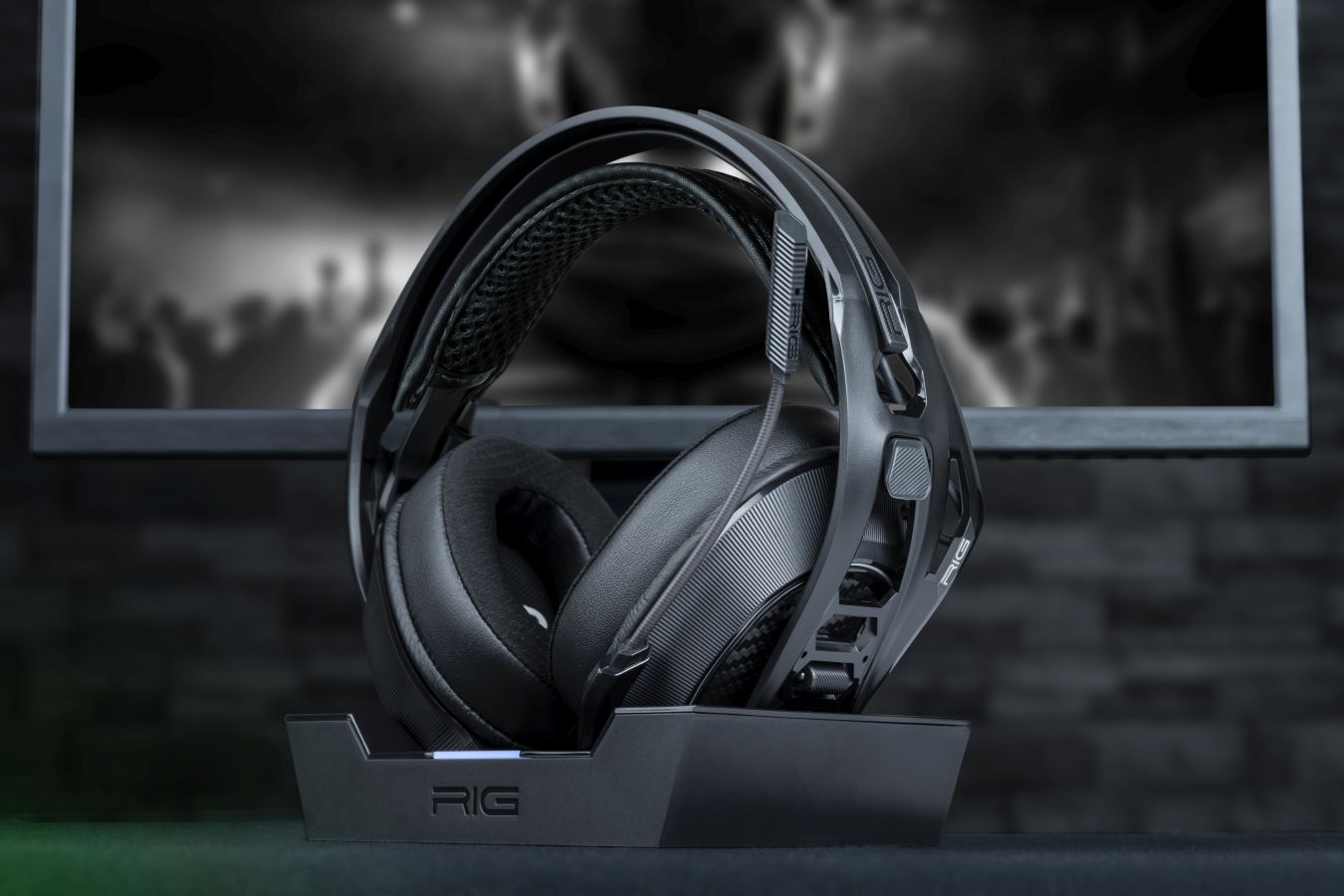 Another important factor for any headset is it’s versatility. For the RIG 800 Pro, there’s only one way you’ll be able to connect it up and that’s via USB-A ports, and even then you’ll have to pick the console of your choice. While I totally understand that many headsets don’t feature the ability to jump between devices, one of my favorite headsets allows me to use it with literally anything. Some of that is the connection, it uses a USB-C dongle and an adapter for a USB-A, but beyond that is a 3.5 port to use it wired. I understand only so many ports fit on a headset, but given this other headset is only $20 more, I’m not sure why the RIG 800 Pro couldn’t have at least included one to give it that extra umph. The more devices I can use something with, the more I’ll use it, and at least with the 800 Pro I’m stuck on PlayStation and PC.

I was going to bring some of these other features up in different sections where they would fit, but after some deliberation I wanted to call out how the RIG 800 Pro does a lot of little things right. Beginning with the mic, I love the flip to mute function. I know several headsets do it, but with this one Nacon added a sound indicator, with a convenient beep heard in your ears to know if it’s muted, with a similar tone to let you know you’re back online. These tones are another part of the headset I’m enamored with. There’s one to let you know you’re turning the headset volume up too much, as well as vocal cues (a woman’s voice saying power on for instance) for turning it on and off, even being able to hit the power button while you’re using it for a connection and battery power notification. Another feature a lot of headsets have is mic monitoring, but having a dial on it so I can fine tune it on the go is appreciated. It’s the little things that make a good device a great device, and the RIG 800 Pro is a great device by those standards.

The RIG 800 Pro is a fantastic headset that does the little things right among a few shortcomings. Sure, I’d like to be able to use it via more devices, and I don’t know how micro-USB charging was justified in the design room, but a lightweight and comfortable headset with phenomenal sound and a great mic makes up for it, at least a little bit.

David Burdette is a gamer/writer/content creator from TN and Lead Editor for Gaming Trend. He loves Playstation, Star Wars, Marvel, and many other fandoms. He also plays way too much Call Of Duty. You can chat with him on Twitter @SplitEnd89.
Related Articles: RIG 800 Pro HS
Share
Tweet
Share
Submit