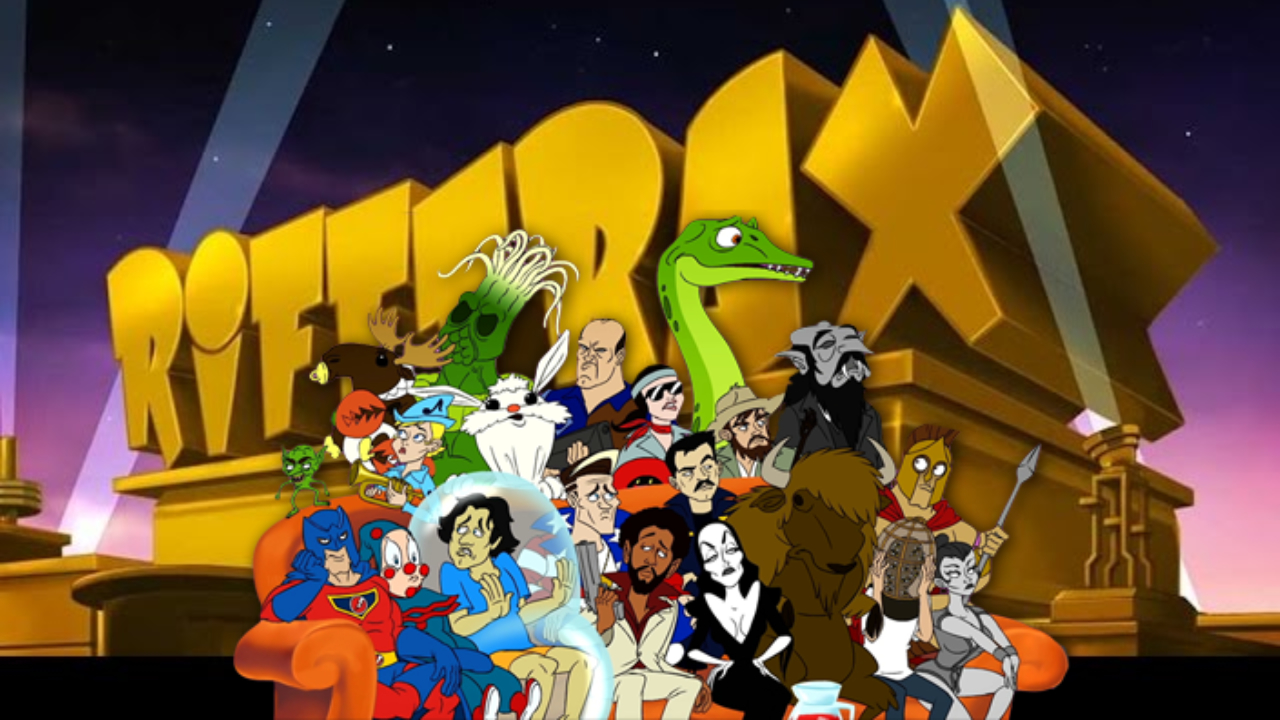 My love for all things MST3K and then Rifftrax goes all the way back. I’ve watched Pumaman (or Pyuma man, if Donald Pleasence has anything to say about it) fly like a moron, I’ve seen the horrifyingly hilari-bad film Manos: The Hands of Fate (Hi Torgo!), my family and I watch the Just the Jokes version of the entire Harry Potter series every year, and movies like Birdemic (“slrrrpanels”) and Road House (take your pick on the original Nelson solo, or the new 3-Riffers edition, they’re both great!) have gotten periodic playtime around our household. Heck, even the Twilight drek is almost watchable with the combined powers of Mike Nelson, Kevin Murphy, and Bill Corbett. With cameos from giants like Neil Patrick Harris, “Weird Al” Yankovic, and many more, Rifftrax is the cinematic comfort food that got me through the pandemic. Well, it got me this far, now I’ve got Rifftrax: The Game to get us through the crummy sequel. Let’s power up the Nestor-powered sleigh and set sail for a world where Ben Affleck (just a fleck) is both Daredevil and Batman. Oh the humanity…

If you looked at the trailer above and immediately thought of What the Dub?!, then you’ve got a good idea of what you’re in for with Rifftrax: The Game as it is the spiritual successor. I can say that, because the developer of both games, Wide Right Games, says it is, so shush. If you’ve not played either, then here’s a crash course on your path to being a professional riffer. Not unlike You Don’t Know Jack or games like it, one person will host and stream to any sharing service (e.g. Twitch, Discord, etc.) and the others will join that host at a webpage (rifftrax.game) with a four character code. At this point the host will pick either Pick a Riff or Write a Riff (more on those in a bit). Next up, that person will select the game parameters such as how many rounds they’ll play, how much time to input or vote, and even the option to turn on ranked voting. At this point, everyone takes a stiff drink from something preferably alcoholic and braces themselves for some of the worst films imaginable.

It's time for Rifftrax! Let's play RiffTrax: The Game on PC

The players will be shown a short clip (with subtitles, thank you!) and then asked to insert their own riff. The track will then play again, inserting one of the player’s riffs. The track repeats, the next riff plays, and so on until all riffs have been seen. At this point, everyone will vote for their favorite, and the score is then tallied. The next round kicks off with a brand new clip, brand new riffs, and play continues until the end of the final round when a winner is declared.

The primary problem with a title like Rifftrax: The Game, and those in this genre, is that it’s dependent on a larger party to wring the most fun out of it. Put simply, despite what’s on the virtual box, it’s unplayable with two people. Player 1 and 2 will pick their riffs, and they’ll be read aloud by the quite-good automated voice, and then one of the three official Rifftrax team members will read the third option, thus invalidating it. While it might be funny, you know that wasn’t player-chosen. It’s a bummer as the alternative is one where you don’t get the official talent delivering the lines like the professional riffers they are. Expanding the team to three makes the game more competitive, but you’ll really need between four and six to reach full potential.

Before you get started with a game you’ll pick between Pick a Riff and Write a Riff. Pick a Riff presents a list of possible riffs you can use to match the situation. As such, it’s largely subject to getting good responses to use. Not unlike Cards Against Humanity — the fun is kinda luck of the draw, and you can only redraw once. In Write a Riff, you’ll be typing in your own riffs to try to make something funny. You’ll hear the scenario I mentioned above again, having one of the big three read their own joke amidst the player-submitted ones. Unless you are drunk, you aren’t picking the one that is read by the team because it’s obviously not correct, regardless of how fitting or funny. Still, the Write a Riff option is the superior option as it lets you make your best response. It’s also where you’ll uncover the Venn diagram between your friends who think they are funny versus the ones that actually are.

Listen, I don’t know what the team at Coronet Films and Safety Instruction Films, both now-defunct safety video companies, did to attract the attention of the Rifftrax team, but wow will you be seeing a lot of their slightly off-kilter, frequently inappropriate films. Highlights include Kodachrome-colored garbage like “Build your Vocabulary”, “Shake Hands with Danger” (yes, he did just take the wrench and then hand it back for no reason), and far worse. You’ll also get movies like “Boy in the Plastic Bubble” (yes, that’s John Travolta), “The Last Shark”, and “Robo Vampire”. All of these are beyond awful, making them perfect for riffing. Unfortunately, due to licensing restrictions and the raised eyebrows of an evil army of lawyers, you won’t be getting any of the Just the Riffs movies. Not the fault of the developers or the Rifftrax team, this means you won’t get to write your own riffs for the likes of Harry Potter, Wonder Woman 1984 (which is fine – that film riffs itself), or Face/Off. What you will see is over 2,000 clips across a wide variety of films, with the first content drop hitting for free in the first patch, adding more drek from the likes of “Planet of Dinosaurs”, “Beaks!”, “Giant from the Unknown”, and “The Wonderful Land of Oz”, and if you’ve not seen that last one, I’m gonna recommend you watch it during the day – it’s a horror film whether it means to be or not.

I mentioned that the game integrates with Twitch, and it does so via Twitch Chat voting for up to 12 “audience members”. This aforementioned patch also gives a bevy of new moderation and content control tools to help keep the baddies out of your PG-13 riffing fun. This brings me to the custom riff options.

If you are inclined, and you (of course) own the rights to whatever you are about to include in your game, you can add your own custom .mp4 clips to your game. This works well if you are streaming on Twitch as everyone else can remote-view the clips, meaning they don’t have to have a copy of said .mp4 themselves. You’ll also have to adjust the subtitle options (they are plaintext, so it’s not difficult) so you can present them properly, but it does mean you could conceivably show whatever you want. I’m not about to run afoul of said lawyers, but you are free to do as you see fit – just make sure you invite me. I think I’m funny, but I’ll let you judge for yourself in our gameplay video above.

The game has shipped for Switch, Xbox One, Xbox Series X/S, PlayStation 4, PlayStation 5, and PC, and supports cross-platform play right out of the box. It also has an introductory price of just $9.99, which honestly feels about right. While I can’t say I like the Pick a Riff option, the Write a Riff mode could make for some hilarious party play. If you and your friends are the type of folks who enjoy tearing up the low-effort garbage Hollywood continues to pump out, then this is the game for you.

Rifftrax: The Game is a fantastic way to bring your funny friends together to riff on infamously-bad movies. With over 2000 groan-worthy tracks, and more on the way, it should make for some genuinely funny moments at your next party. Just be prepared to type as the Write a Riff is the best way to play.

Ron Burke is the Editor in Chief for Gaming Trend. Currently living in Fort Worth, Texas, Ron is an old-school gamer who enjoys CRPGs, action/adventure, platformers, music games, and has recently gotten into tabletop gaming. Ron is also a fourth degree black belt, with a Master's rank in Matsumura Seito Shōrin-ryū, Moo Duk Kwan Tang Soo Do, Universal Tang Soo Do Alliance, and International Tang Soo Do Federation. He also holds ranks in several other styles in his search to be a well-rounded fighter. Ron has been married to Gaming Trend Editor, Laura Burke, for 21 years. They have three dogs - Pazuzu (Irish Terrier), Atë, and Calliope (both Australian Kelpie/Pit Bull mixes).
Related Articles: Let's Play, RiffTrax: The Game
Share
Tweet
Share
Submit