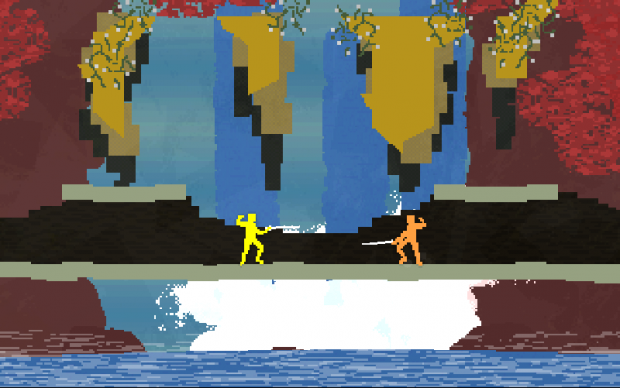 Nidhogg is deceptive in its simplicity. Characters seemingly ripped from an Atari game do battle on a two-dimensional plane. There are only two buttons at your disposal: jump and attack. But underneath this simplicity lies a hidden depth, filled with expert sword throws and deft parries. This is what makes Nidhogg so entrancing, and that feeling has been brought over to the PS4 completely intact.

Nidhogg on the PS4 remains virtually unchanged from when I played it on the PC earlier this year. It’s still a masterful fighting game, simple enough that anyone can instantly grasp its concepts, but deep enough to provide layers of nuance for those who want it. Nidhogg is all about positioning, and how you hold your sword and respond to your opponent will determine whether you make it to the next screen or whether you end up impaled on your foe’s sword. It’s also a bit lacking in single-player content, with only four arenas and a threadbare arcade gauntlet. If you’re looking for more details, check out my review of the PC version here.

The retro aesthetic is striking in its simplistic complexity

The only real addition made here is the inclusion of cross-buy. Players who get the PS4 version will end up with the Vita version, and vice-versa. The Vita version features a few more graphical quibbles, with weird boxy outlines flashing around each of the fighters on occasion. Other than that, both versions are just as fluid and frenetic as the PC version, and as a bonus, PS4 players can play against Vita players in online multiplayer. It’s a nice bonus.

Nidhogg’s beauty as a fighting game speaks for itself, and Sony fans can rest assured that Nidhogg is just as awesome on PS4 as it is on PC. Now go get eaten by a giant worm. It’s fun!

Nidhogg on PS4 is just as great as it was on PC. I'm still hoping for more content, though.

I've been gaming since my dad made the bad decision of buying me a Nintendo when I was four years old. Every day I'd find myself with my face glued to a TV screen, punching away at buttons, getting furious with Bowser, Dr. Wily, and those freakin' birds in Ninja Gaiden. Since then I have failed to get my parents to play any board game with me, I sold my full copy of Earthbound with box and guide for $300 to some dude in Austria for rent money, and I still believe in Nintendo even after all these years.
Related Articles: Nidhogg
Share
Tweet
Share
Submit