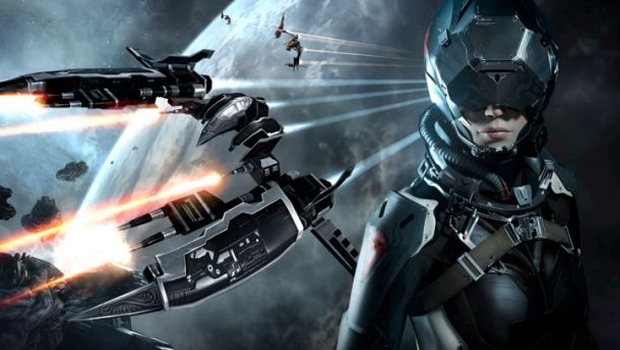 If there is a better use for Virtual Reality than simulating a cockpit experience, I cannot imagine what it’d be. The team at CCP agree with that and have brought their space combat simulator EVE Valkyrie to the PlayStation VR. As a chronic migraine and nausea sufferer, would my brain be able to handle the tense rolls, split-second pivots, and high speed combat that the experience provides?

To test the waters with as little public embarrassment as possible, I dove into the single-player components of EVE Valkyrie. Admittedly, I never quite clicked with the parent product, but I found the hard sci-fi theme compelling. You awake inside a clone tank, the last thing you remember…is your death.

The memories are disoriented and hazy, but you remember that you were a pilot. Before slipping free of your mortal coil, your consciousness was forcibly ripped and stored, now downloaded into a clone body. You and a few other repurposed pilots are now part of an AI-backed (Rán Kavik – voiced by Katee Sackhoff of Battlestar Galactica fame) group called Valkyrie. It’s a pretty interesting premise that is unfortunately underutilized. The first few missions are tutorial-like, culminating in an exciting carrier assault mission. It’s all fun, but it’s over far too quickly, ending right as things were getting interesting.

Incredible sense of scale, and gorgeous to boot.

There is one large difference between the Oculus Rift implementation of EVE Valkyrie and the PSVR version — graphical fidelity. The PC version requires some serious power under the hood to looks its best, but it is a sight to behold. Somehow, the team at CCP managed to cram most, but not quite all, of that graphical fidelity into the PSVR version. There are a few ragged edges here and there, and some textures are lower polygon count than its PC-powered brother, but in motion all of that melted away. I’m certain some sites will spend countless cycles cross-comparing the platforms, but I’m telling you that once you put on that headset, you’ll forget all about the differences as you spin, roll, and dogfight in this absolutely gorgeous game.

Much like EVE Online, the main thrust of EVE Valkyrie is its online component. Building on the clone-based PvE premise, the multiplayer game feels like the space combat portions of Battlestar Galactica come to life. From the slingshot carrier launch to the “all that separates you from death is this little pane of glass” feel of space combat, EVE Valkyrie is a highly-serviceable shooter that is made into something epic with the addition of virtual reality.

If there is one thing that EVE Valkyrie does extremely well, it’s scale. You go head-to-head with ships as you dodge between the steel ribcage of ships being built in orbit, floating asteroids in the belt, and amidst massive starships as they drift through open space. There are three modes to tackle in multiplayer, which is where most of the content lives.

The chaos of combat

The first, and most obvious, is Team Deathmatch. Team Deathmatch is eight on eight, supporting virtual reality combat between players on the PlayStation VR and Oculus Rift and, this fall, the HTC Vive. I’m only assuming that the cross-play functionality works because I can see nothing to the contrary. Matchmaking is quick, and players from all over the world are duking it out — a good sign of a healthy multiplayer engagement.

The second mode, entitled Control, reminds me of similar modes in the Battlefield series. Each player has a finite number of clones for respawning, with both sides trying to deplete the enemy clone pool. When you are near highlighted control points, you can deploy a drone to hold that space against the enemy clone count. It’s not unlike the ticket count system, though EVE Valkyrie also lets you harass the nearby enemy carrier to deplete that clone reserve faster.

The final multiplayer mode is Carrier Assault. Carrier assault is far and away the best of the modes, requiring player cooperation to take down three control points to lower the carrier shield. Before the shield can be repaired, players must scramble to destroy as much of the carrier as possible before the shields are brought back online. If you take down all three cooling nodes, you’ll eventually expose the enemy carrier’s core. Not unlike a trench run in Star Wars, you’ll zip through gantry-laden corridors to reach the core, blasting it and then escaping to minimal safe distance before it explodes.

There are three classes of ships in EVE Valkyrie — a surprisingly shallow pool for a game that boasts a fairly large list of playable spacecraft. Fighters come in three flavors: fighters, heavy, and support. Each type includes three different craft to pilot.. Since your clones are just meat to pull on the sticks and flick buttons, your XP is tied to the craft itself, so normally you’ll find a niche and settle in. The nine craft do feel somewhat different in use, and the weapons are certainly a massive differentiator. The fighter class unleashes a fury of bullets, courtesy of a pair of twin machine guns trained on the reticle in the center of the ship. Fairly weak rockets can be fired by keeping your eyes locked on the target, and a Micro Warp Drive lets you fold space over short distances — handy for quick objective captures or evading danger. The heavy sports a massive flak cannon that is aimed with head tracking, and trades missiles in for heavier armor. It also has an electromagnetic shield, laser gatling cannons, or a tighter flak cannon projectile called the Mortar. The support class has a Buff Beam (is that really the best name we could come up with?) that can repair friendlies or erode enemies, but can also be kitted out with missile pods, gattling cannons, or a simple phaser.

There is one negative that I think is easily fixed, but I’m surprised isn’t already handled — voice comms. EVE Valkyrie is, at its heart, a multiplayer game. As such, I was surprised that the game didn’t auto-group the eight players on each side and link up their voice channels. Given that the PlayStation VR has a microphone built directly into it, it seems like a simple thing, but in fact you can only spin up voice comms with your friends between battles. It’s a minor concern, but one that makes the difference between a well-oiled squadron of fighters and a free-for-all.

I can’t talk about EVE Valkyrie without tackling microtransactions. EVE Valkyrie has in-game currency called gold that lets you purchase cosmetic items such as paintjobs, decals, and cockpits. In this way it reminds me of Mechwarrior Online. Gold is converted to silver (at a somewhat painful rate) and then can be used for in-game purchases for things like ship unlocks. Also similar to MWO, you can grind out in-game cash to purchase the same items, and they are all cosmetic in nature (other than the new craft), so at the end of the day it is pay-for-convenience, not pay-to-win. There are also “Implants” that can be used to boost XP gain, but the common belief is that it’s roughly 1.3x the normal rate, so it’s largely debatable if that’s worthwhile. I supposed I’d rather have ineffectual microtransactions over ones that harm competitive nature. In the end, I suspect that they’ll overhaul the system over time and make these more transactions more enticing and worthwhile.

A visual feast jammed directly in your eyes

It’s strange to circle back within my own review, but I cannot overstate how awesome it is to have such agency within a combat simulator. Being able to track enemy aircraft by simply and very naturally turning your head, or lining up a shot while barrel rolling in a different direction is simply something you have to experience for yourself. It’s hard to describe, but having tasted it, I cannot imagine how I’ll ever play another simulator on my non-VR PC again. The fact that I was able to play something so bombastic and high-speed as EVE Valkyrie without nausea was a dream come true.

There is nothing quite like experiencing the catapult launch in EVE Valkyrie in VR. The game looks amazing, and the cross-play is seamless. The single player is a welcome addition, albeit a short one, and the new Carrier Assault mode shows commitment to expanding the game by developer CCP. Let’s hope they bring a steady stream of new modes, maps, and ship models to keep this gorgeous game fresh and alive.

Ron Burke is the Editor in Chief for Gaming Trend. Currently living in Fort Worth, Texas, Ron is an old-school gamer who enjoys CRPGs, action/adventure, platformers, music games, and has recently gotten into tabletop gaming. Ron is also a fourth degree black belt, with a Master's rank in Matsumura Seito Shōrin-ryū, Moo Duk Kwan Tang Soo Do, Universal Tang Soo Do Alliance, and International Tang Soo Do Federation. He also holds ranks in several other styles in his search to be a well-rounded fighter. Ron has been married to Gaming Trend Editor, Laura Burke, for 21 years. They have three dogs - Pazuzu (Irish Terrier), Atë, and Calliope (both Australian Kelpie/Pit Bull mixes).
Related Articles: EVE Valkyrie
Share
Tweet
Share
Submit