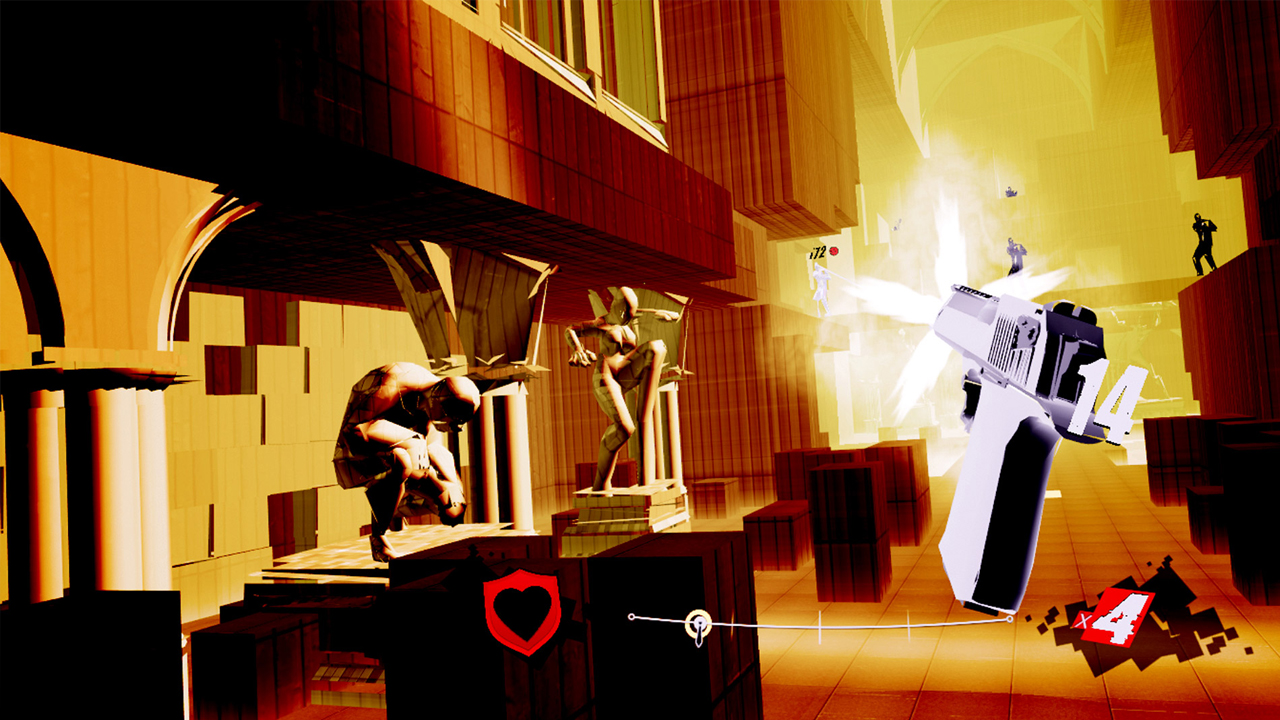 It’s a good time for rhythm games in virtual reality. Developer Cloudhead Games has folded together the gunplay of the John Wick movies, a splash of the gun kata from Equilibrium, stirred with it the pulse-pounding action of Beat Saber, dropped in some Superhot for spicy flavor, and packed it with a hot soundtrack. Boom, Pistol Whip.

It would be very easy to dismiss Pistol Whip as a shooter, and if you did, you missed the point like I did at first. Every enemy that popped up, I dispatched with lightning speed. They moved, they died. I got to the end, smiling at my 8x multiplier and having not been hit once and was surprised to see that I just scored a “C” for that level. I’m not sure how I could have shot them faster, so what was the problem? Rhythm. Rhythm was the problem.

Pistol Whip is, amongst being insanely fun, part shooter and part rhythm game. Hell, once I realized that I needed to time my shots to the beats, it turned into a dance game. Before long I was dancing to the beat, letting the enemy fire at me and returning fire to create a syncopated rhythm that made the game so much more fun. While memorization is a key to success in Pistol Whip (enemies spawn at the same place every time and higher difficulty levels just spawn more of them), the soundtrack and gameplay are linked at the hip. I could describe it, but that’d undercut just how awesome this is in motion.

There are three difficulty levels for the seven levels (plus an additional one for training), each with a cool track to back the action. The soundtrack is good enough to warrant the $12 on Steam, featuring EDM artists including Lektrique, Black Tiger Sex Machine, HVDES, Apashe, The Trickaz, Sam Lamar, and Dabin. It’s not often that a soundtrack hits the 100% mark, but I liked every single one of these songs, and listening to them over and over as I mastered each level didn’t diminish that at all — I’m still dancing to these beats. The nice part is that this is labeled “Soundtrack Vol 1”, so clearly Cloudhead Games has more in store for us, and I can’t wait.

As you can see from the gameplay video above, Pistol Whip’s graphics are basic. If you are reminded of Superhot, you are on the right track. As a result, the video I took of the game was larger than the download, and that’s thanks to some very basic geometry. It fits the vibe perfectly as the shapes pulse and move with the beats.

Speaking of beats…this game is called Pistol Whip, right? While you can and will shoot enemies, and a lot of them at that, enemies that are within striking range can be bashed in the head with the butt of your pistol. This scores you double the normal amount of points due to the risk, but it’s oh so satisfying. Enemies shooting at you have a red line from their origin point to your head, so you’ll have to dodge, weave, and move to avoid those bullets, but when you can do that enough to get right in their face to smash them in the dome? Bliss.

If you are out of shape, you are gonna be tired after a few rounds of Pistol Whip. Dodging the obstacles in the environment (on the hardest difficulty level you’ll need a full-depth squat to get under some of the overhangs), and dodging left and right around pillars is fairly normal at the top difficulty level. You might wanna limber up before you play Pistol Whip, but watching your unsuspecting friends flail around makes this an excellent party game. Its pickup and play nature makes it easy for anyone to understand, but once they get the rhythm (pun intended), they’ll love it even more. 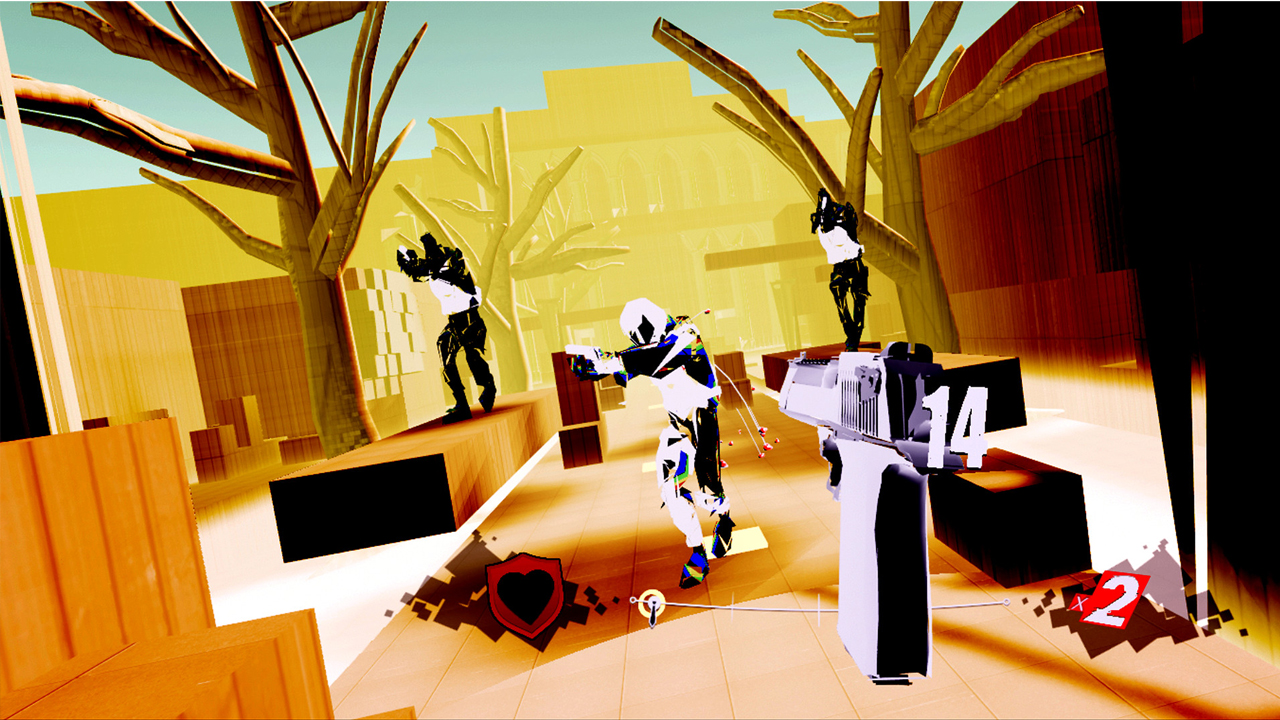 The big guys with the armor take three hits (or one smack to the head) to drop.

There are a half dozen modifiers to switch things up. Normal mode is a single pistol, but for a 25% reduction in your score, you can go akimbo. Similar point reductions lets you have unlimited ammo or no-fail mode as well. You can stack these if you really must, but at the lower difficulty levels it’s entirely unnecessary. Selecting the Deadeye mod threw a big wet blanket on my game and I suddenly realized that this game has an aim assist. To help you feel all Baba Yaga, the game helps you nail those targets, but Deadeye takes all that away. You either hit them on your own, or you missed. Missing a target when the level continues to move forward can suddenly overwhelm you, and a level you breezed through before can become a bullet hell. Once you’ve gotten through the levels a few times, turn it on and see how good of a shot you really are. Those no-fail, unlimited ammo, and akimbo modes probably look pretty good about now, don’t they?

I’m very happy to report that this is a zero nausea game. No matter how much I dodged, ducked, squatted, and otherwise moved I never experienced any issues with motion sickness whatsoever.

If I had any requests for Pistol Whip, it’s the same that I made with Beat Saber — give me the ability to import songs and map my own levels. I know that’s a big ask of any indie developer, but modders have already taken on the first half of that, with custom song imports being convoluted but possible. Hopefully, Cloudhead can take a nod from fellow rhythm game Synth Riders and drop this goodness in natively.

Pistol Whip is insanely fun, downright hectic, and excellent for parties. While the seven levels won’t last very long, the soundtrack and compelling rhythmic gameplay carry this one to stratospheric heights. Embrace your gun kata, and pick this up.

Ron Burke is the Editor in Chief for Gaming Trend. Currently living in Fort Worth, Texas, Ron is an old-school gamer who enjoys CRPGs, action/adventure, platformers, music games, and has recently gotten into tabletop gaming. Ron is also a fourth degree black belt, with a Master's rank in Matsumura Seito Shōrin-ryū, Moo Duk Kwan Tang Soo Do, Universal Tang Soo Do Alliance, and International Tang Soo Do Federation. He also holds ranks in several other styles in his search to be a well-rounded fighter. Ron has been married to Gaming Trend Editor, Laura Burke, for 21 years. They have three dogs - Pazuzu (Irish Terrier), Atë, and Calliope (both Australian Kelpie/Pit Bull mixes).
Related Articles: Let's Play, Pistol Whip, VR
Share
Tweet
Share
Submit