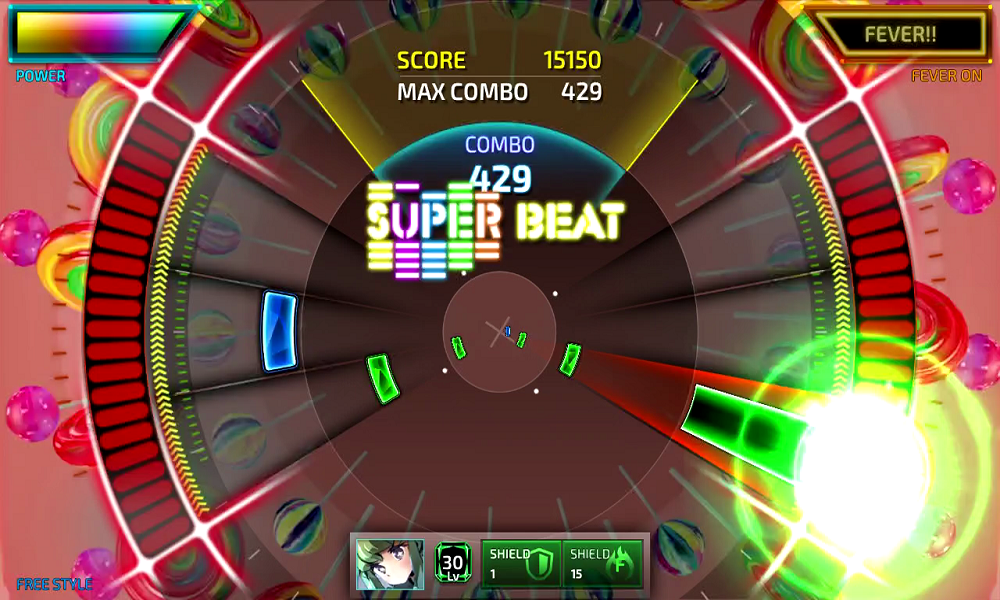 I love the joyous feeling I get when I play a great rhythm game. Hatsune Miku Project Diva Future Tone and The Metronomicon: Slay the Dance Floor were amazing titles on PS4, and the Switch has provided great ports of Voez and Thumper. Continuing the porting trend is PM Studios’ Superbeat: Xonic, a new game from the people who made the DJMax series. An insanely difficult but rewarding experience, rhythm game experts will feel right at home with the Switch version of Superbeat: Xonic.

Like most rhythm games, the aim of Superbeat: Xonic is simple in execution: You’ll have to control either four or six lanes of buttons, which are laid out in an oval shape. Each button correlates to one of the face buttons on your Joy-Con, and you can even use the touch screen to hit them. In an unlockable mode, you’ll have to use the L and R buttons in tandem with the six lanes, so you’ll have eight different inputs to worry about. Additionally, you’ll have to use both analog sticks to swipe up or down (as well as utilize holds), so the simple presentation can lead to complex gameplay pretty quickly. I really enjoyed the spiritual successor to the DJMax Portable series (which had its lanes placed horizontally), and while I did struggle with getting used to the lane placement, it becomes second nature after a few songs. In order to clear a song, you’ll have to stay with some life remaining; while you can still keep playing after you lose your life bar, it’ll count as a failure at the end of the stage. In a nod to PM Studios’ previous games, you can trigger fever mode by hitting enough notes in succession, though you’ll lose it the second you break your streak.

For those used to the PlayStation 4 or Vita versions, you might have to adjust your muscle memory a tad; because of the placement of the Joy-Con analog sticks, it can feel a bit awkward changing from swipes to button taps due to the sticks placed unevenly rather than side-by-side. It’s not a big issue, as the more finicky method involves the touch screen. While I could tap quite well, holds and swipes were difficult for me to land, and I felt that it was nigh impossible to clear songs exclusively with the touch screen/handheld mode. (On a side note, the L and R buttons don’t have a touch screen counterpart, so you’ll have to use the buttons in order to play the 8 button option). It’s not a dealbreaker, but expect to take some time transitioning your hands to the motions.

The performance of the game is top-notch, however. Framerate stability is crucial in rhythm games, and Superbeat: Xonic is great in that aspect. The game runs at a smooth clip, with notes flying fast and no dips on the screen. With literally hundreds of notes per minute, you can get a bit overwhelmed, but the snazzy graphics won’t hit a snag in docked or handheld mode. While I did enjoy the overall presentation and performance of the game, the background visuals are a little underwhelming, especially compared to the neat FMVs featured in the DJMax series. While the provided icons and loading song backgrounds are visually pleasing (and some of them look downright gorgeous), the visuals during gameplay are slightly generic backgrounds. They’re serviceable and admittedly cool to look at, but I would’ve loved to see some variety after some time playing the game.

The main point in every rhythm game lies in its soundtrack, and Superbeat: Xonic excels in that area with ease. You’re not going to get mainstream music or anything recognizable in the western market on here (the studio is based in Asia, after all), but if you’ve followed the DJMax series, you’ll see some familiar names. 3rd Coast, Nauts, and Nien come to mind, and they were staples of the previous series. While you might not be familiar with the music, you’ll love the eclectic diversity of song genres and types. From mellow pop beats to hardcore rock to techno remixes of classical tunes, the dozens of tracks here are simply marvelous. Heck, I even bought the soundtrack preemptively before receiving the game because I was interested, and boy did I have some fire tracks stuck in my head. It’s one of those soundtracks that hits you out of the blue and has an infectious and addictive feeling. (Easy Easy Go and Trompe L’oeil are my favorite tracks, by the way.) You can see the effort of a carefully curated soundtrack, and Superbeat: Xonic will not disappoint rhythm game veterans.

Some of the loading screen images are pretty neat.

As a spiritual successor to the DJMax series, it’s also extremely difficult. While the four-lane mode is meant to give new players a chance to try out the mechanics (and there are three separate difficulties that tweak life loss and timing), the songs can ramp up in complexity pretty quickly. I consider myself adequate at most rhythm games (for reference, I’ve beaten the entirety of The Metronomicon on Hard, and can clear mid-range Extreme songs in Project Diva Future Tone), and I was struggling trying to beat level six songs in the six-lane mode. However, this is a game that rewards persistence, and victory is always just a few retries away. It helps that the soundtrack is amazing, and I didn’t mind a couple game overs if it meant playing awesome songs again. There is always a need to improve when playing rhythm games, and I think that Superbeat: Xonic is a great way for rhythm game fans and veterans to test their skills. It’s not the most accessible game in terms of difficulty, but it’s a treat for those who want to learn the ins and outs of what the game has to offer.

While you have a basic “three-song” mode (where you select different songs based on how many lanes you chose as well as which song you’re on), there’s also a world tour mode that tasks you with playing in different clubs. These missions can range from getting a certain number of combo notes within a song or not breaking your combo while a random modifier is in play. I was surprised with the amount of variety in these missions, and clearing these clubs (while also leveling up through normal gameplay and here) will grant you additional DJ icons to decorate your profile. These also have the added effect of giving you some assistance, from more experience gained each song to preventing your combo from being broken, so they’re a great help, especially during later missions. While the basic song selection mode would have sufficed, I’m glad to see a dedicated mission mode which can challenge even the most hardened rhythm game players.

Finally, there are leaderboards that you can utilize for scoring. While these will be populated shortly by some ungodly scores, they’re pretty encouraging to those who want to aim for the top. They’re divided by mode as well, so you can hone your skills on either four, six, six with FX, world tour, and free mode (the last of which is a combo challenge that tasks you with racking up a maximum combo during a selection of songs you freely choose). I’m guessing that the leaderboards won’t be cross-platform, so the competition might not be as fierce as say, the Sony versions of the game.

A fiercely difficult but engrossing experience, Superbeat: Xonic has a sense of musical euphoria that can only be experienced in a quality rhythm game. While it might take some time to acclimate to the gameplay, you’re in for a treat. Pick this up if you’re a rhythm game fan: you won’t regret it.

Elisha Deogracias is an aspiring accountant by day, freelance writer by night. Before writing for Gaming Trend, he had a small gig on the now defunct Examiner. When not being a third wheel with his best friends on dates or yearning for some closure on Pushing Daisies, he's busy catching up on shonen manga and wacky rhythm games. Mains R.O.B. in Smash. Still doesn't know if he's a kid or a squid.
Related Articles: Superbeat: Xonic
Share
Tweet
Share
Submit