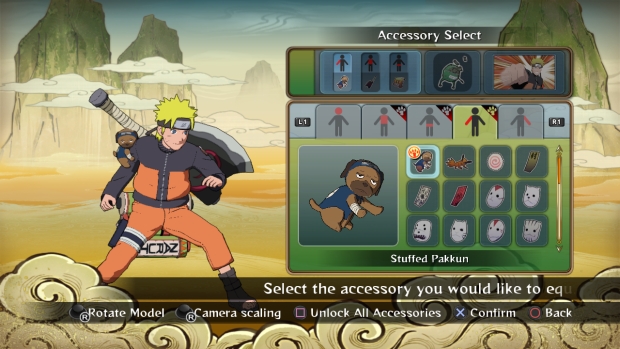 For a long time it seemed like Dragon Ball Z would be the anime series with the highest number of console fighting games, but it seems like Naruto is hot on its heels, if it hasn’t caught up already. The Ultimate Ninja Storm series has had several iterations on the PS3 and Xbox 360, starting early in the life of the consoles. Now with those two consoles near their end of their lifespan, we might have the last Naruto game for that console, Naruto Shippuden Ultimate Ninja Storm Revolution.

CyberConnect2 has had a wealth of material to work with, including hundreds of chapters in its manga and two different anime series. While previous entries have had a good deal of story to use, they story here is comparatively thin. The Ninja Escapades contain two stories broken up by battles, with a five minute giving background on one character. These shouldn’t take much longer than an hour so if you were hoping to relive some favorite Naruto moments, you’ll likely walk away disappointed.

The main portion of Revolution is the Ninja World Tournament. Fighting through to determine the best fighter, you’ll find most of the content here. Most of the battles here are mano-a-mano, with your typical health bar showing the status of the combatants. Occasionally a four-player battle occurs, but the mechanics here change. Each player starts with a number of orbs and as players get hit an orb pops out and can be picked up by other players. The player at the end of the round with the most orbs wins that round. It kind of reminds me of Power Stone, except you don’t get a power boost for collecting all of them.

That doesn’t mean that there isn’t much to do between fights, and you do get some small story bites in here. Challenge missions reward you with medals to gain accessories. The employment office lets you spar with other characters or tasks you with finding items across the island. Meeting up with other characters lets you perform side quests. As you perform side quests for these characters, they become available in the game. They not only become available to use in the other modes, but they can be used as support characters in the Ninja World Tournament. These characters can be used to perform multi-character combos, give you extra buffs, or block incoming attacks. It takes a while to get all of these characters unlocked with a roster of over 100 characters once all is said and done.

Since Revolution has over 100 characters, the question of balance comes into play. Since certain characters are more powerful than others in the anime, I am willing to be a little more forgiving since I don’t believe they are all meant to be balanced. However, the large roster list might be a bit too overwhelming to all but the most strident fans for Naruto.

The fighting itself has changed significantly. The new system includes breaking and counter mechanics that require proper timing to pull off successfully. Without using these, you will most likely fail, no matter how good you are at the previous tactic of dashing and attacking. Leaving yourself exposed can cause a large portion of your health bar to disappear.

Unfortunately, if you haven’t played before then you will have to look up tactics online or experiment through trial and error. The developers must have assumed that anyone who is playing this game has played the others because no semblance of a tutorial is given. Whenever I play a new fighting game, I like to go through the tutorial to help remind me of the mechanics as well as learn any that have been introduced or I have just plain forgotten.

Revolution looks great, but a few setbacks reveal its age. Graphically the characters look like their anime counterparts, and all of their special moves are faithfully recreated in the battle scenes. The open world sections suffer from a poor draw distance though, with characters sometimes not showing until they are right next to you.

All of the voice actors return to reprise their roles, so you won’t be shocked by the speaking parts. The dialogue isn’t anything special, but they do what they can with what they were given to work with. Musically Revolution takes its cues from the show as well, helping high energy flow throughout the battles while calming during the exploration.

The barebones online mode disappoints. You can jump into the action with one-on-one matches, but lobbies for 4-8 people exist as well. However, only two people are fighting in the lobby while everyone else waits. Don’t be surprised if others drop off while waiting their turn to fight.

The parts of Naruto Shippuden Ultimate Ninja Storm Revolution should mesh together to make a great game rising above just being fanservice. However, a few missteps within the game drag it down. If you are a fan of the game series, you may want to check it out first before making a purchase.