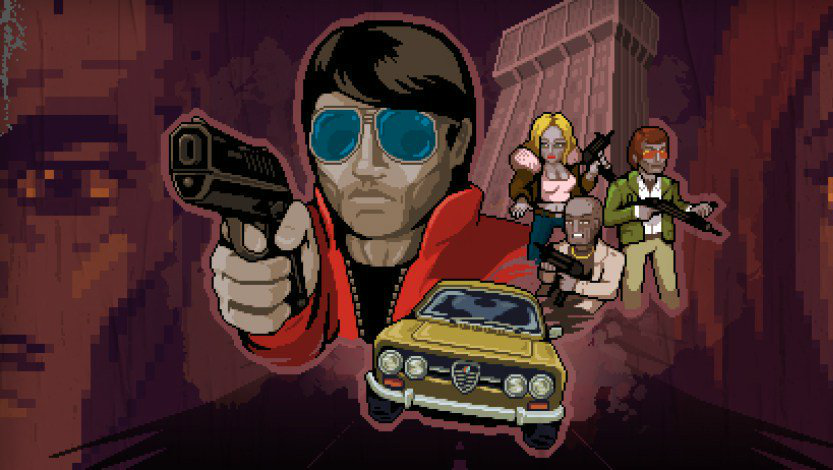 Violence, anxiety, uncertainty, and fear dominate our cultural landscape. Division spreads across the world as tyrants rise, a looming threat of Russian destruction and all out world war plague us all, and Farrah Fawcett reigns supreme as the IT-girl of the decade. It’s the 1970’s and everything is disgustingly free and dripping with hot violent sex. Milanoir is a faithful attempt to bring the 1970’s New Hollywood film style to the video game medium, one that derives its grit and soul from the tension, uncertainty and debaucherous nature of the decade.

A twin stick shooter at heart, Milanoir flows like a movie from scene to scene, employing brief moments of cinematic drama between the gun play. Gritty, dirty and obscene, Milanoir is a taste of exploitation cinema that combines all the best flavors of the genre into one. With such a cool premise and high level storytelling, it is a criminal shame that the game is all at once clunky, unwieldy, and overly difficult.

Outside of a dusty bar in the old district of some forlorn Italian community, a man approaches and enters with hidden intent. He approaches the bar, asks for a bathroom in the genre’s distinct proper manner, and goes into said bathroom where a rough killer named Piero is dealing with important business. The man fires into a stall, but chooses poorly. Piero makes him pay for this mistake and then puts his pants back on.

Thus begins a train of slayings, blood and one-liners brought on by Piero’s hot desire for revenge. There is nothing that Piero will not say or do to get this revenge, but like with many other anti-hero types, his rage and indiscretion may end up his undoing.

Milanoir is stylized graphically like a 1980’s computer game, with a sort of forced 3D perspective in a 2D environment. The game moves between side-scroller and free-range movement, and interjects different action sequences and boss battles at certain moments throughout. There are some highly creative sequences that utilize patience over fury, and the game never stops surprising you as you play.

The story flows from scene to scene with a smoothness that keeps things moving along at the correct pace. The only thing that breaks the action is an incredibly high level of difficulty that leads to repeating sections of the game over and over again. If you can keep killing without dying, you’ll be able to enjoy the story much more than I, who found the difficulty restrictive at best.

The problem is that the game’s action is hit and miss, and the mechanics of enemy interactions, from the death animations to the hitboxes, are rough and somewhat unpredictable. A sequence that takes place as you speed down a highway has you shooting at cars and motorcycle riders but often whether they are hit feels random, and once they do die they flash and explode and kind of drag along with the screen, obscuring the action in detrimental ways.

Often enemies can run up on you in close range and it doesn’t allow for clean shots at point blank range. I don’t know if that is a planned mechanic to encourage keeping enemies at a distance, or just a failing of the aiming mechanism, but either way it is infuriating. It makes enemies with firearms easier to kill than the knife wielding prostitutes and reverses the ages old wisdom of not bringing a knife to a gunfight.

When the gameplay works, it is exciting and fast paced, and the twin stick mechanic makes it feel like a space shooter at times, though there is a trigger button in addition to the right stick aim. The game allows you to take cover, and it works great, complete with some destructible cover, which makes for a need to keep moving. Dying is frequent but the game does get you immediately back into the action. And while there are frustrating mechanics, there are in equal measure some very cool moments in the game that are also fairly unique experiences, such as a knife fight that forces you to focus more on survival and finesse than strength.

Milanoir has a look and feel that fits the game perfectly. The graphic style combines with the story to hone a nostalgic glow that makes the game feel instantly familiar. The music, however, isn’t very impressive, and plays often on repeat with short cuts that can grate on the nerves. The game may be played best with the music eliminated.

Milanoir is a amalgam of 1970’s exploitation cinema and 1980’s video games that captures all the grit and violence of the former and the difficulty and frustration of the latter. The story is well written and the game flows between different action sequences and cinematic breaks that keep both gameplay and the story fresh. There are some issues with hit detection and death animations that will frustrate you at times, but the game rewards you for getting through each sequence and makes it worth the effort.

Patrick Rost has been with Gaming Trend since 2013. At first focused on sports coverage, Patrick has gone on to cover a wide range of games and other products for the website. Outside of Gaming Trend, Patrick writes and records music, grinds perpetually in Elder Scrolls Online (PS4), and lives day to day with his two dogs, Bob and Stella.
Related Articles: Milanoir
Share
Tweet
Share
Submit