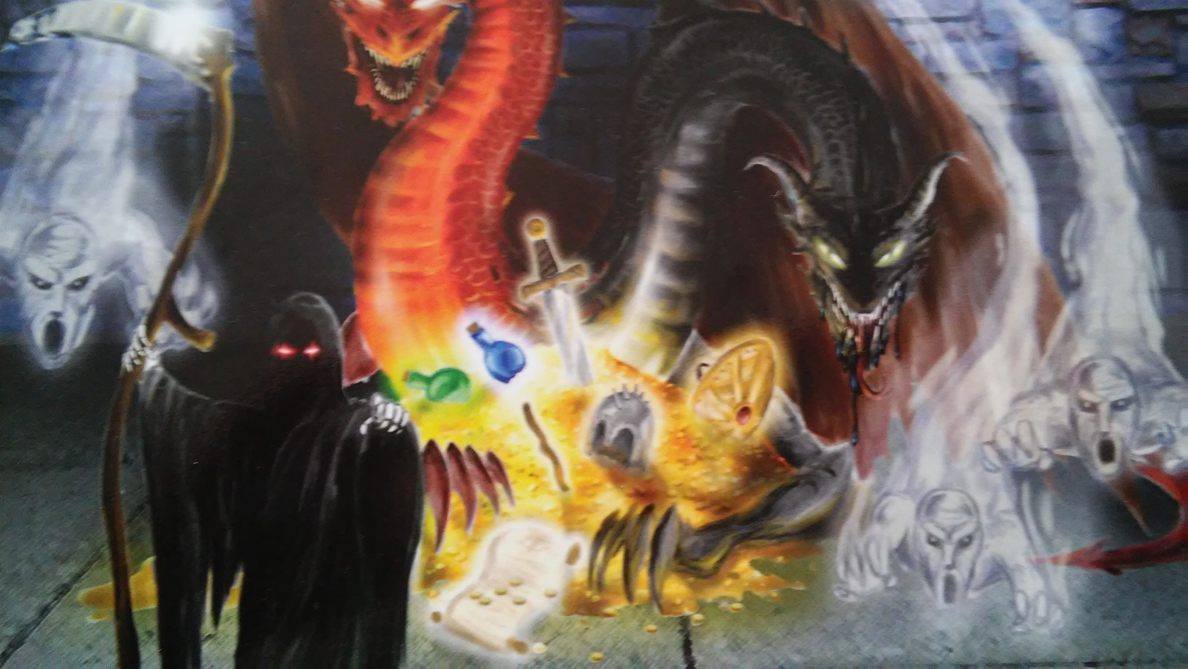 A simplified example of how your dungeon will come to be.

We just descended to the fourth level and I am beginning to doubt if we will make it out alive. Back a while some wicked black sludge sprayed acid on our wizard and it ate away most of her armor and the rest of her patience. We have a moment of rest as the thief’s shaking hands try to get through this lock up ahead, and I almost find myself hoping he won’t get through. Something is howling on the other side, and it isn’t alone. If I were a sane man I would not go on, but sanity is something we find ourselves lacking. There is too much gold at the bottom of this labyrinth. Too much to turn down.

In an age of political plots, noble heroes, and dark mysteries, Labyrinth promises to return us to a simpler time when simpler stories reigned true. Your band of warriors explores the depths of ruin, kills everything that stands in its way, and steals enough treasure to make it worthwhile, all with a unique twist: you create your locale randomly through a series of rolls, taking you through traps, monsters, and challenges that will change with every game. This simple fantasy style evokes the feeling of old school roleplaying, as often for better as for worse.

Each layer of the dungeon is made randomly through a series of tables that denote direction, doors, monster presence, and treasure drops. You begin with a grid that denotes your entrance and ultimate goal and proceed from there. This randomness creates a surprisingly effective atmosphere of dread. Untold threats lie around every corner that the game’s probabilities do a surprisingly good job of keeping the experience balanced. It is not perfect of course, and there are times when you end up overwhelmed. More problematic is the number of references needed to fill a given room. You have to flip to one page to determine direction, then another to find the occupants, followed by a third to get a monster’s stats and behavior. The book has a section near the end with many relevant tables and I would have appreciated it if these were also included for the sake of having everything in one place.

Even before you explore this dungeon, the most glaring weakness to the system shows itself. Unlike the games that inspired Labyrinth you find a distinct lack of personal character. Without a dungeon master to take the place of non-player characters, you are left without social encounters. Your means of interacting with your world is purely physical: fight the monsters, open the doors, and evade the traps. You get the sense you are enmeshed in a Gauntlet-style crawl through legions of beasts standing in your path. Without the personal aspect of who your character is, Labyrinth has you define them through a few key stats.

Every character is human, and you can choose between four archetypal classes: the warrior, wizard, rogue, or druid. The druid sticks out as being different from the usual cleric we would expect from original D&D which is the clear influence for Labyrinth, except that a druid acts and functions as a cleric, turning undead and healing the other characters. This change feels unnecessary for any purpose other than to differentiate it from its roots, which it seems to be attempting even at the expense of harming ease of use. We who have heard the terms Armor Class and Damage now have to contend with equivalent but unfamiliar acronyms such as AV and DV. I would mind this less but many acronyms are introduced before they are explained, making class choice harder to contend with. At the same time, it borrows an old feature from D&D: randomly rolled attributes. Unfortunately, this is a pointless weight on a game without social or mental attributes. You lose the organic character growth when your only attributes are strength and dexterity in place of characters who are either effective or ineffective.

Every class has a mixture of the familiar and the confusing as you take in their abilities.

Each class has abilities that influence not only the equipment they can use and utility in combat, but special ways that each can explore the labyrinth. Wizards can cast spells, but rogues can open locked doors, for example. Warriors may be able to knock through those doors, albeit with the risk of springing a trap. During character creation and actual play you are given some pleasantly tense choices. Why have the warrior break a door down if the rogue can open it? Because they become more difficult to open with each successive door found. Wizards have a small though crucial spell list forcing you to weigh combat utility over exploration and compare both to personal safety. The early game feels effortless but you quickly find labyrinth to be a war of attrition that challenges your dwindling resources.

Combat is a simple measure of determining initiative and attacking by means of weapons and stats. Each monster has a distinct behavior that will make it a lethal challenge and requires strategy to defeat. At times they can feel too similar, but this wears off as the game goes on and the tension rises.

Of course, strategy is limited, especially by your small means of interacting with the dungeon, but you find yourself having fun every time you kick down a door and contend with what is inside. Once you get the hang of putting rooms together, the game runs smoothly. The replay value comes in what you find after your victory: you use the hard-earned gold you reclaimed from monsters to purchase new abilities and equipment and get to try them out in the next dungeon. New levels suffer from a lack of difference in anything except for your own character, however. Monsters increase in difficulty according to a strange and awkward formula involving more math than I would like in a board game.

Along with the core rules, Labyrinth also has two starting adventures: Enter the Labyrinth and Dead Awakening. These simple adventures begin with short stories explaining the characters’ goals followed by long dungeons with special encounters and bosses at the ends. They add an appreciated variety to the game but also highlight its weaknesses. Because you are not able to make decisions like an RPG character, these stories function as cutscenes with pure exposition. I am forced to feel that Labyrinth has the weaknesses of an RPG (having to do dungeons and calculations by hand) as well as the failings of a videogame (not limited choice as to how to interact with your world).

The art is similarly questionable, though whether this is by limited budget or purposeful reference to old D&D books is unclear. The monsters all have a distinct hand drawn feel that instantly brings the mind back to our younger days of dungeon delving. For all the clunky rules and old school meanderings, Labyrinth manages to be a fun time. There is nothing as simple or satisfying as bursting into a room and springing into action at the sight of a fell beast, then taking its treasure as your own and patching up the tattered remains of your party.

Labyrinth has all the dread and fear of an old school dungeon crawl with only part of the complexity. It has some frustrations that never stop nagging at you, but an imaginative adventure system to go along with it.

Labyrinth has all the dread and fear of an old school dungeon crawl with only part of the complexity. It has some frustrations that never stop nagging at you, but an imaginative adventure system to go along with it.

John Farrell is a legal aid attorney specializing in domestic violence, living in West Chester Pennsylvania. You can listen to him travel the weird west as Carrie A. Nation in the Joker's Wild podcast at: https://jokerswildpodcast.weebly.com/
Related Articles: Labyrinth, Tabletop
Share
Tweet
Share
Submit