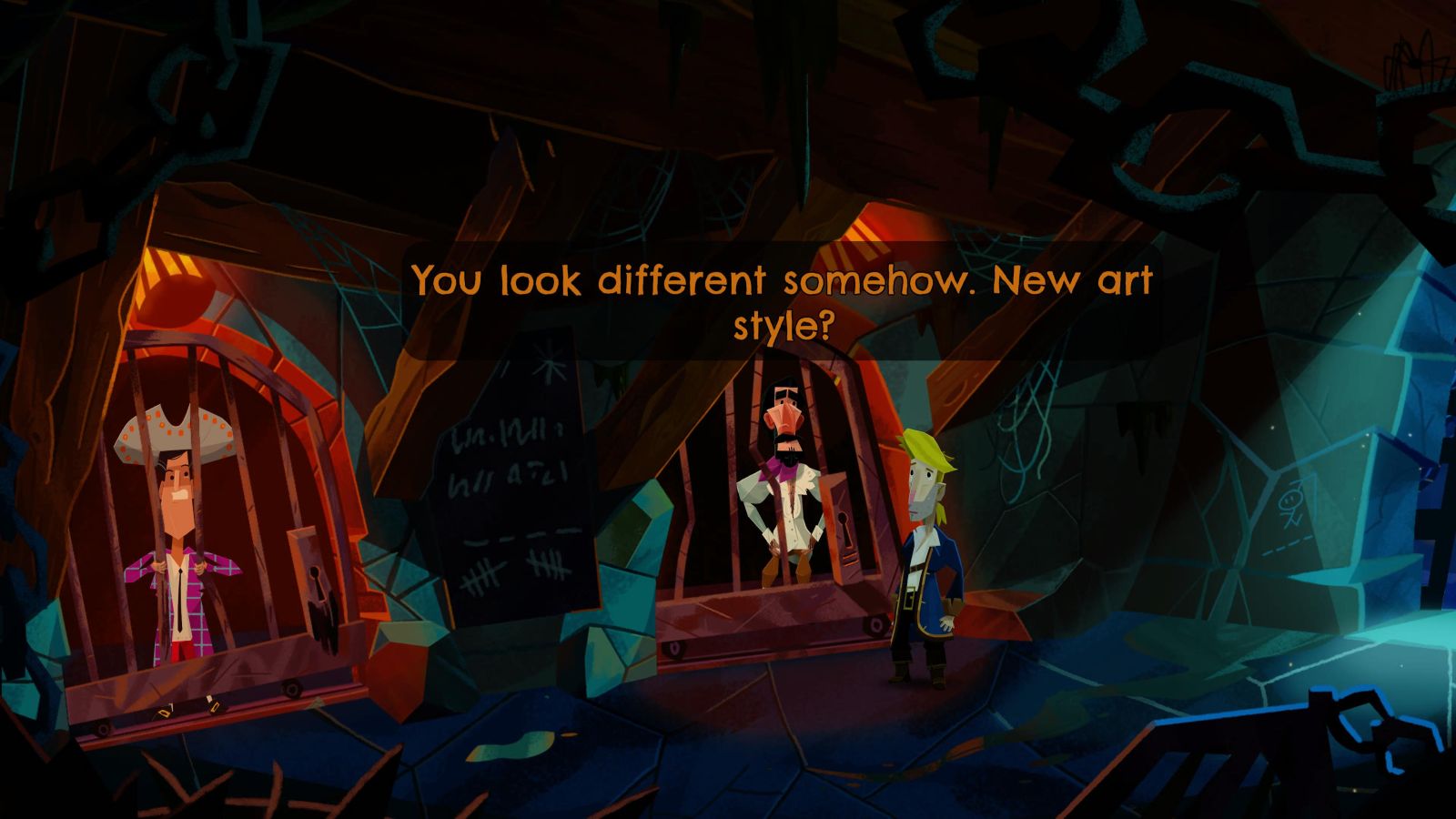 The Monkey Island series holds a special place in my heart. I fondly remember exploring Mêlée Island as a child, not quite sure what I was doing, but enthralled with the witty point-and-click adventure nonetheless. What struck me even then was how unafraid The Secret of Monkey Island was to be exactly what the creators intended, despite the established norms most games followed. It was goofy, it was laugh-out-loud funny, it had great characters, and it was exciting – to put it simply, it just felt special. Everything melded together so well: the laugh out loud sword fights which relied more on sarcasm than any sort of sword skills; the fantastic enemy in the form of the grotesque undead pirate zombie LeChuck, hell-bent on marrying Elaine and destroying Guybrush Threepwood; and of course, our bumbling hero with the heart of gold, who just happened to have a bad habit of ruining everything he encountered.

The Secret of Monkey Island and LeChuck’s Revenge were masterworks and hold up well today. Sure, the original releases feature an unwieldy and confusing gameplay structure by today’s standards, but if you can overlook that – or just play the remasters – you’ll still find a worthwhile story to uncover. Sadly, years have passed since Threepwood’s last adventure. Audiences, and Threepwood alike have been forced to live without knowing the real secret of Monkey Island. 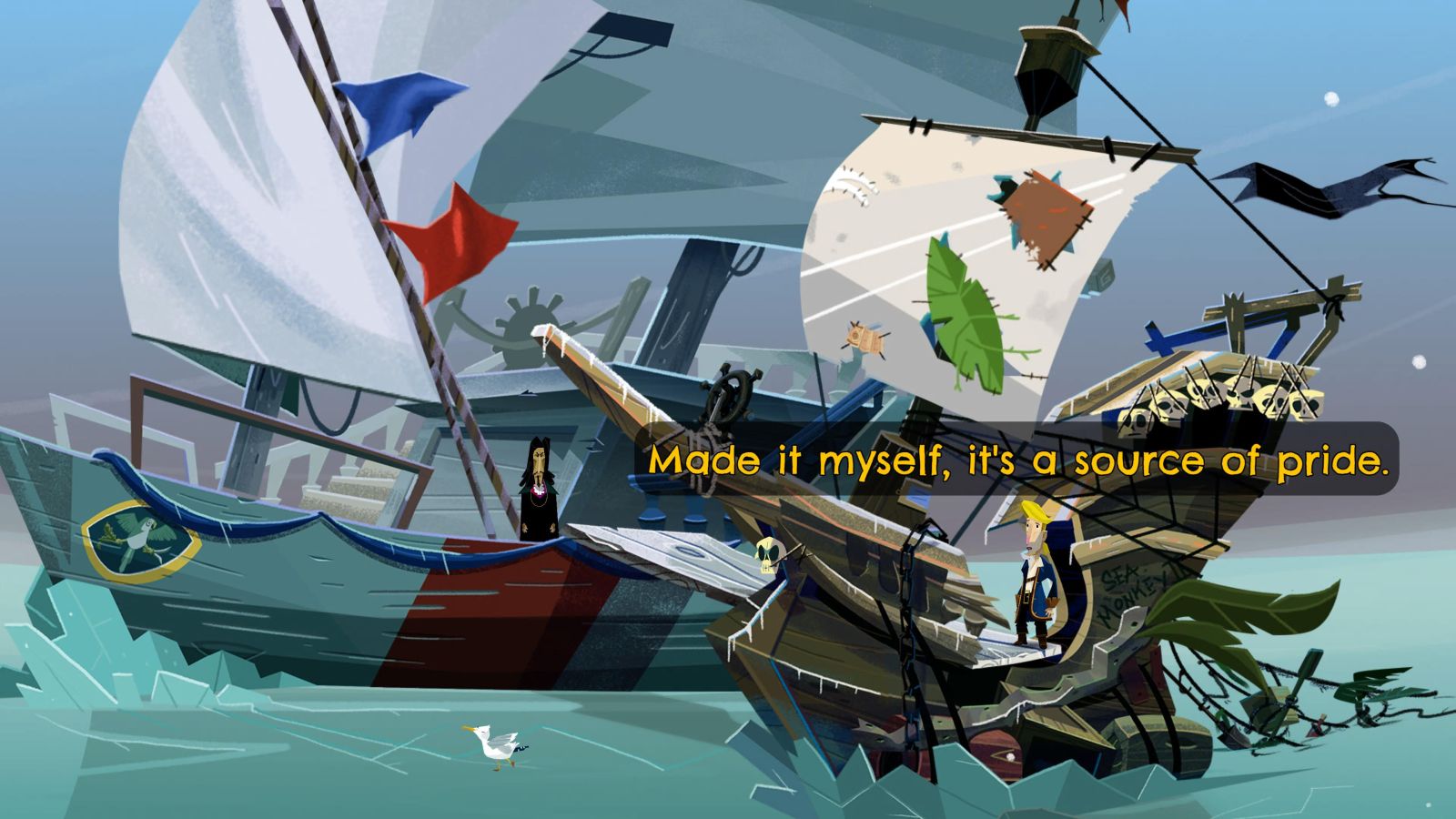 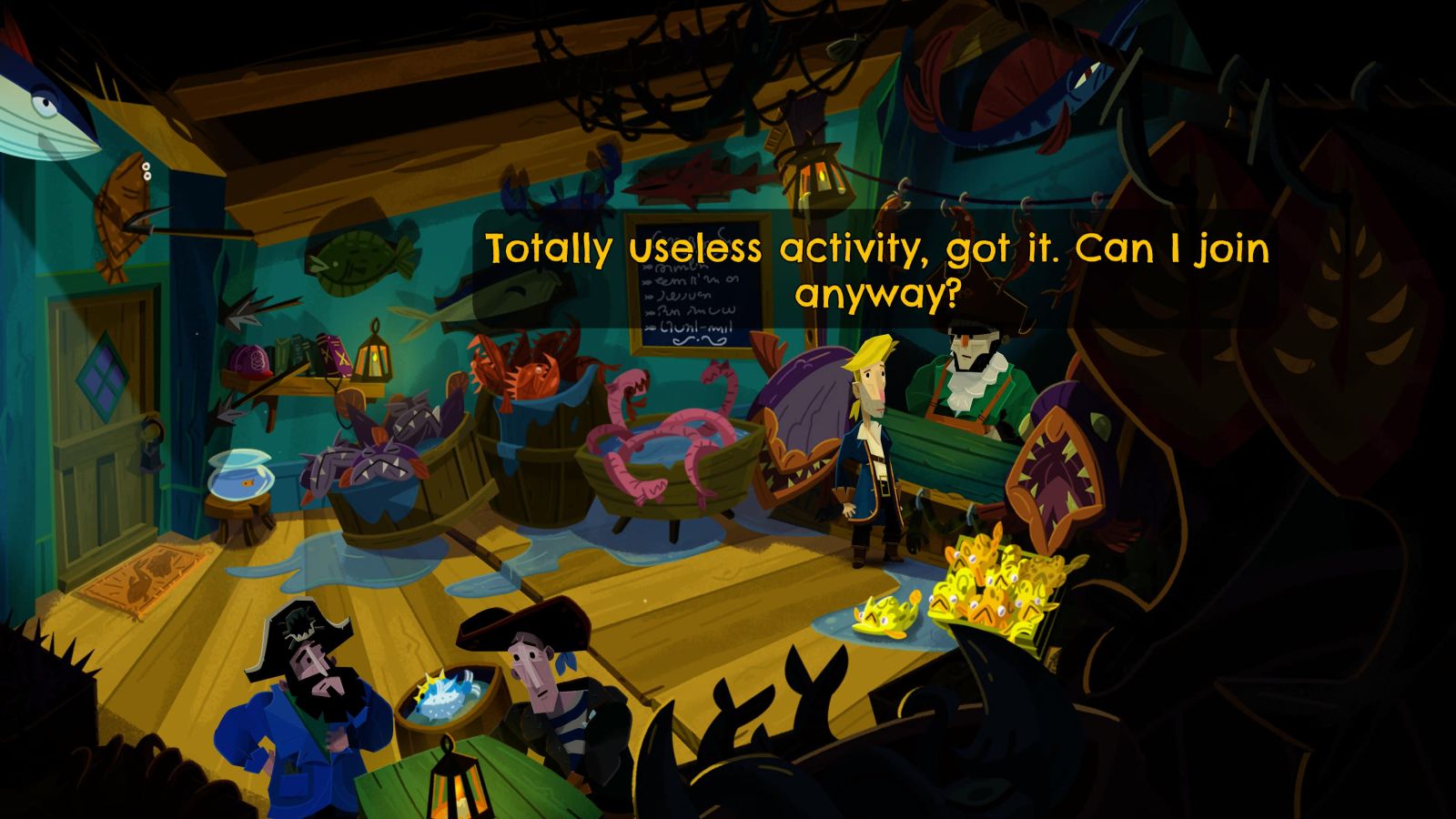 But our long torment is over, as finally our titular hero Guybrush Threepwood is back thanks to the surprise new entry in the series, Return to Monkey Island. Audiences, Threepwood, and LeChuck will finally be able to complete their adventure that began so long ago. Better yet, Return is not just Guybrush’s comeback, but is also the long-awaited return of the iconic duo of Ron Gilbert and Dave Grossman, who together created the series more than 30 years ago. I’m happy to report that the years have done nothing to dampen the charm of the series and Return is every bit as good as its predecessors, offering a delightful and appropriate ending to the Monkey Island journey.

While I do not want to spoil the story, as it is the main crux of why players embrace these games, I will give a quick rundown. The story picks up many years in the future where, despite his valiant efforts, Threepwood has never found the secret of Monkey Island. While he had attempted to move on and had been on many adventures since his Monkey Island days, that was still a sticking point that kept him from truly embracing his life. But hey, his life isn’t all bad. After all, he did defeat LeChuck and nab the love of his life, Elaine Marley. Unfortunately, Mêlée Island has not fared so well, as Captain Madison and her conniving band of pirates have unceremoniously kicked the old leaders out and created an economic downturn forcing many citizens to flee. Despite this, Threepwood’s curiosity eventually gets the best of him and he decides to take one last stab at finding the secret of Monkey Island so that he can finally move on with his life. 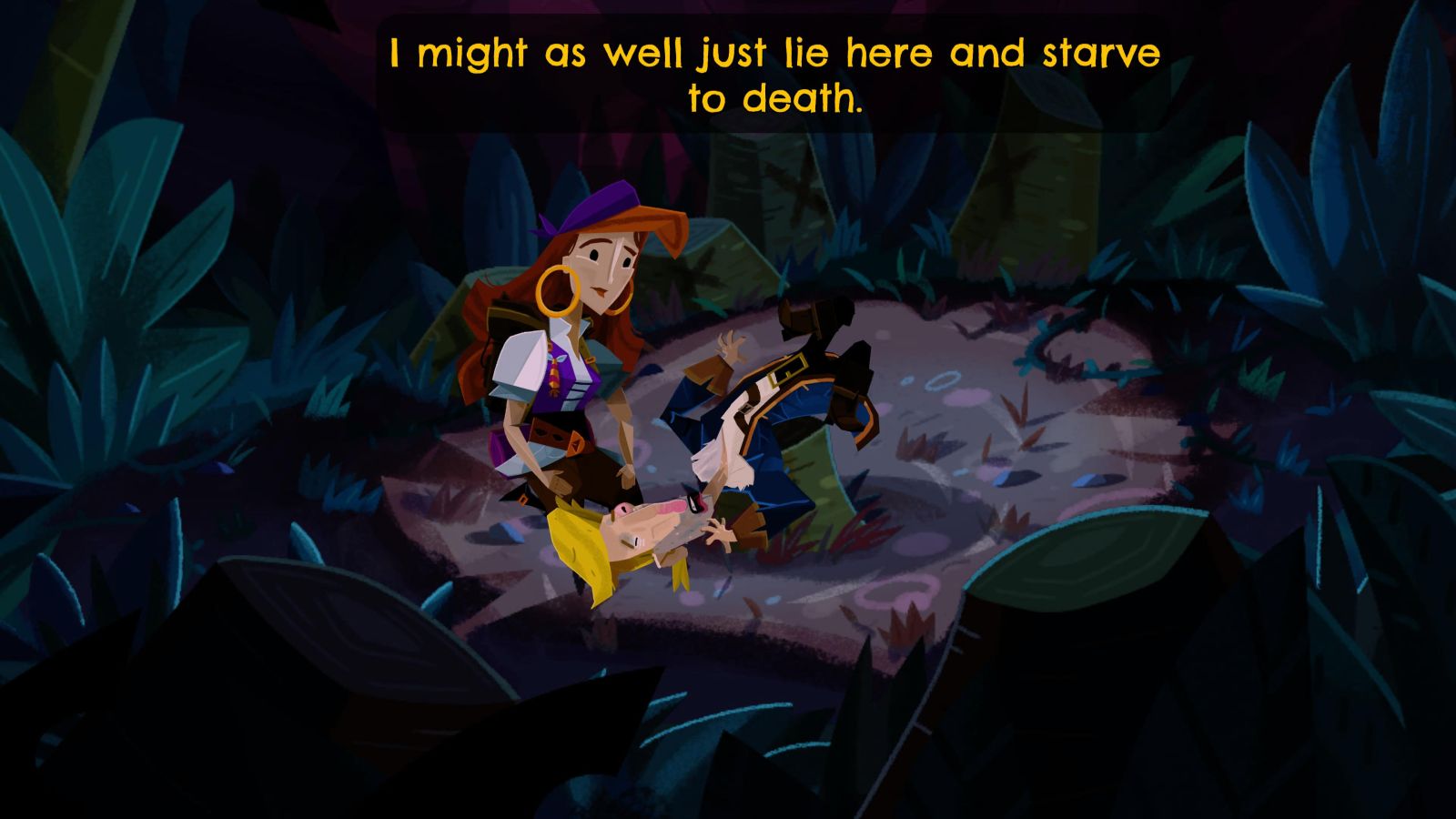 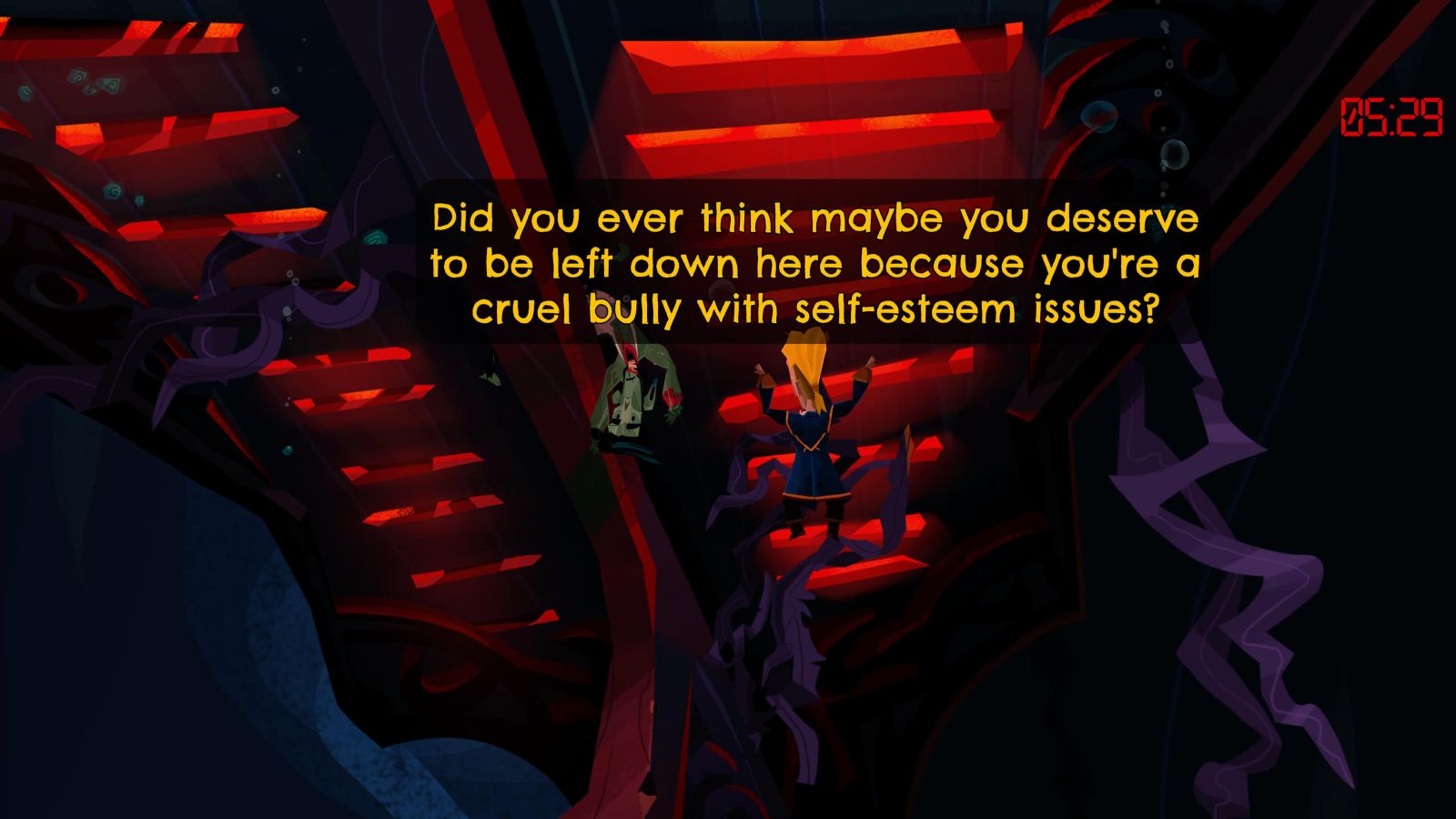 While those familiar with previous titles will find the most joy in this new release, as there are throwbacks galore, those unfamiliar can just as easily begin the journey. For those unfamiliar with the back-story, you can check out The Memoirs of Guybrush Threepwood, a diary of sorts available on the title screen where Guybrush relives his earlier adventures in vivid detail, providing all the info that newcomers need to know to feel ready to tackle the latest adventure.

Return successfully blends modern day approaches to point-and-click adventures while also honoring what came before. The game feels exactly like the next entry in the series, despite its new bold look and more intuitive control system. Gone are the days of having to click everywhere you want to walk, you can now use the thumbstick. No longer do you need to choose action words and combine them with items to complete actions, now you can simply scroll over what you want to look at, talk about, or take. Using an item is as simple as bringing up your inventory, choosing that item, and hovering over where you wish to use it. While I loved the point-and-click games of yore, it is nice that new additions to the genre provide a smoother user experience without sacrificing the game’s quality. 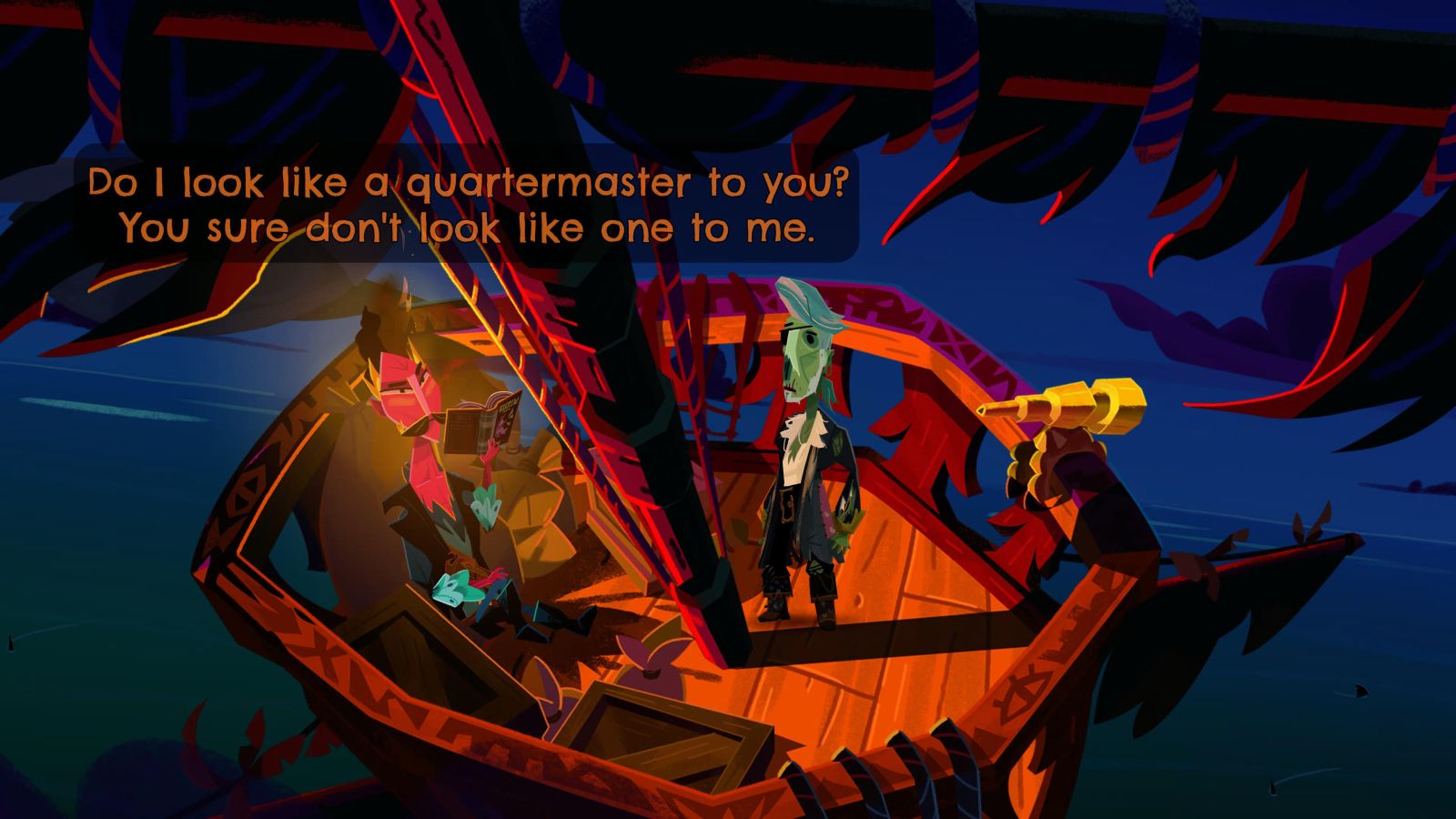 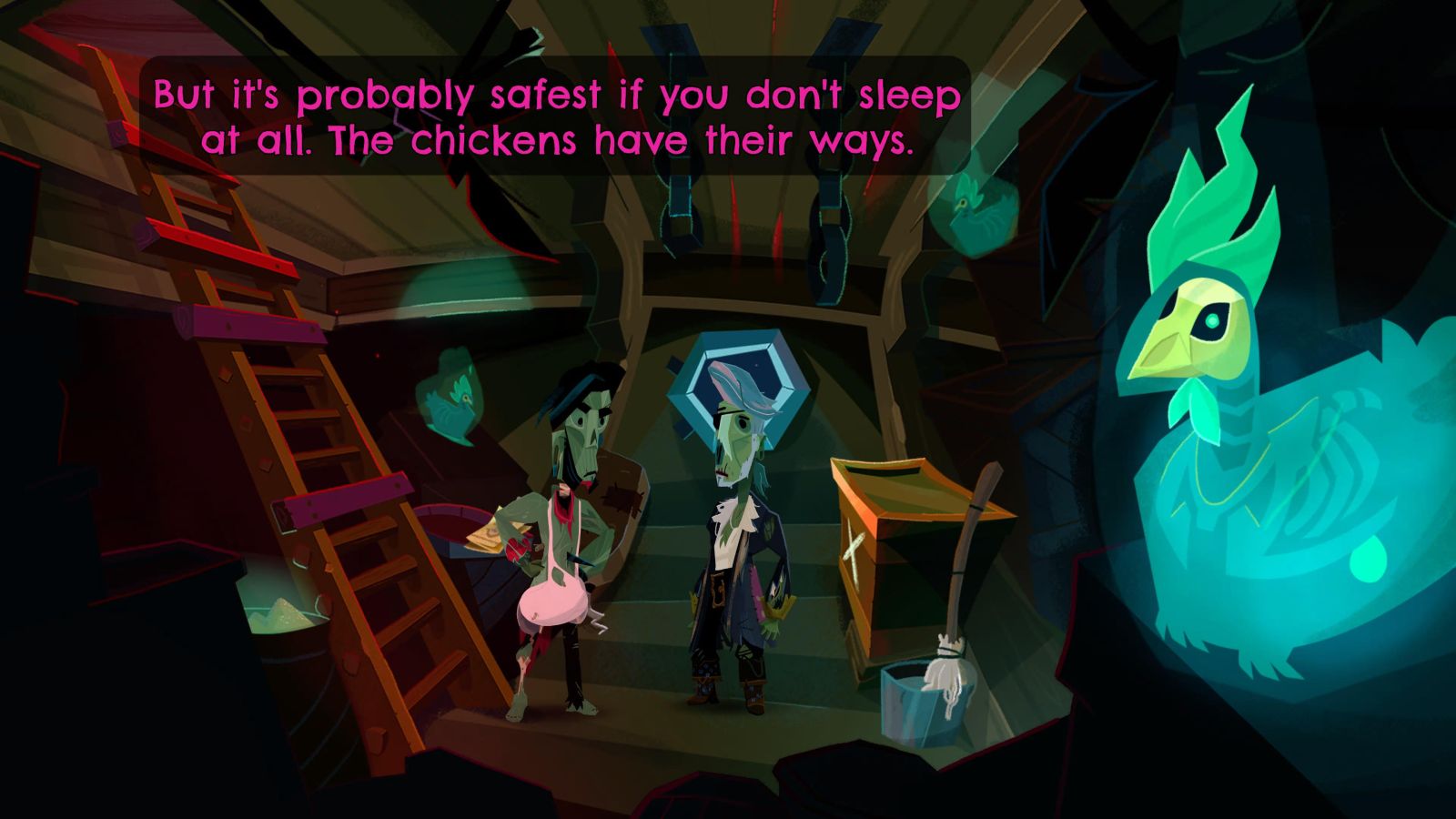 The gameplay consists mainly of engaging in witty talks with the incredibly diverse inhabitants of Mêlée Island and its surrounding areas while solving fun puzzles, none of which ever crossed the line from being amusing to frustrating. But if puzzle solving isn’t for you, or if you do happen to get stuck, Return boasts an intuitive hint system which can tell you as little or as much about how to solve the puzzle as you want.

Early on Guybrush is presented with a hint book but warned, in a tongue-in-cheek way, that using it too much will diminish the sense of adventure that the game hopes to provide. Still, if you are stuck, then you need to simply pull out the hint book and choose which puzzle, of which you are normally engaged in multiple at a time, that you need help with. At first, the book will simply give you a slight hint as to where you may need to look next, but if you keep asking for hints, the book will provide more specific details until ultimately it will just tell you what to do. This system is simple, yet works marvelously and ensures that all players have the tools necessary to experience the story without frustration or having to resort to internet guides.

Further making the experience more accessible is the addition of two modes: Casual and hard. Casual mode provides the full story with most of the puzzles intact, but offers simpler solutions, or at least solutions with less steps to successfully pass. Hard mode makes the puzzles much more complex, inserting multiple new steps for Guybrush to complete. Both modes are spectacular, and highlight just how well thought out Return’s gameplay is. I suspect many players may begin on casual difficulty and then immediately replay the game on hard to see what else the puzzles throw at them. 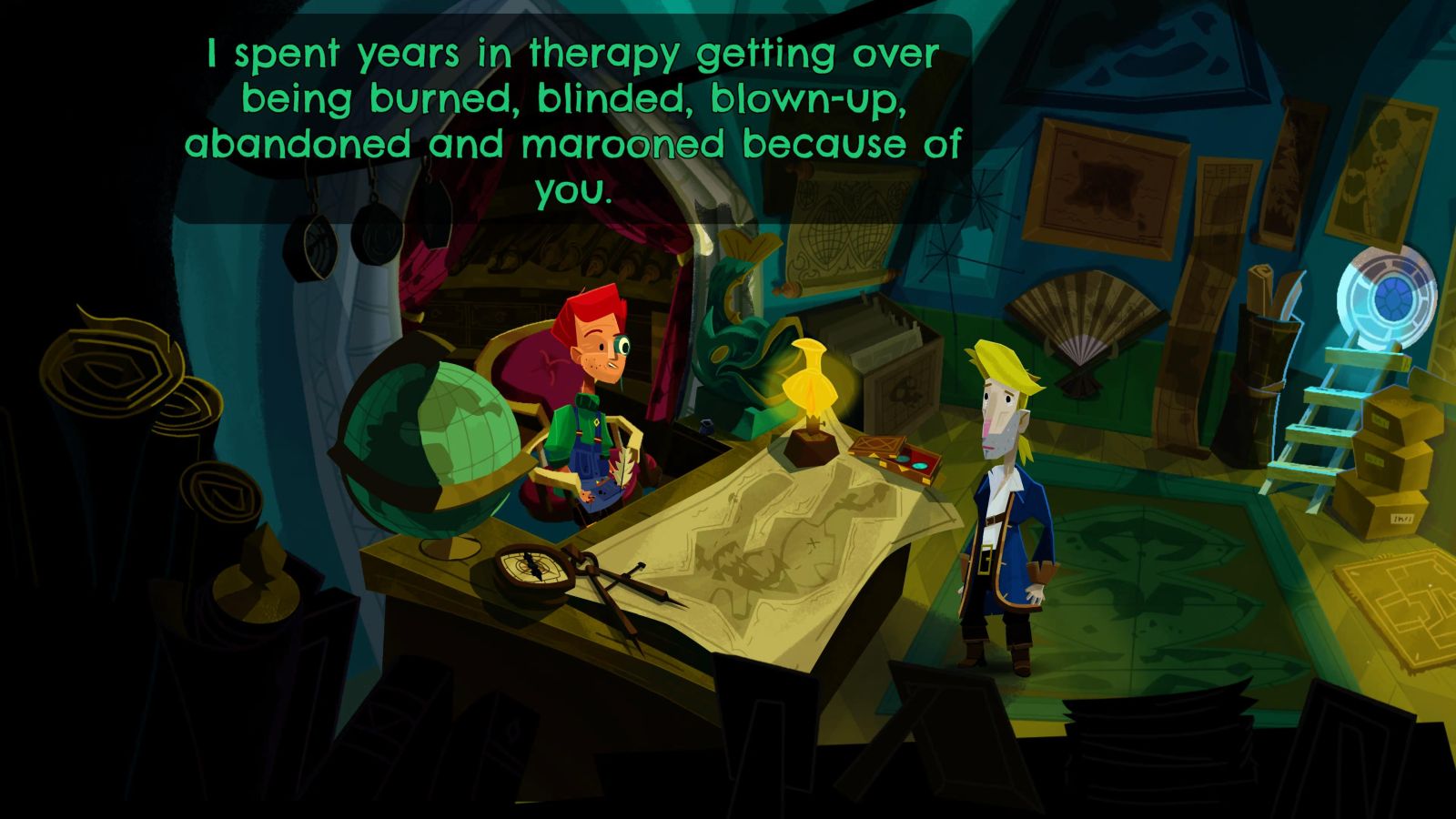 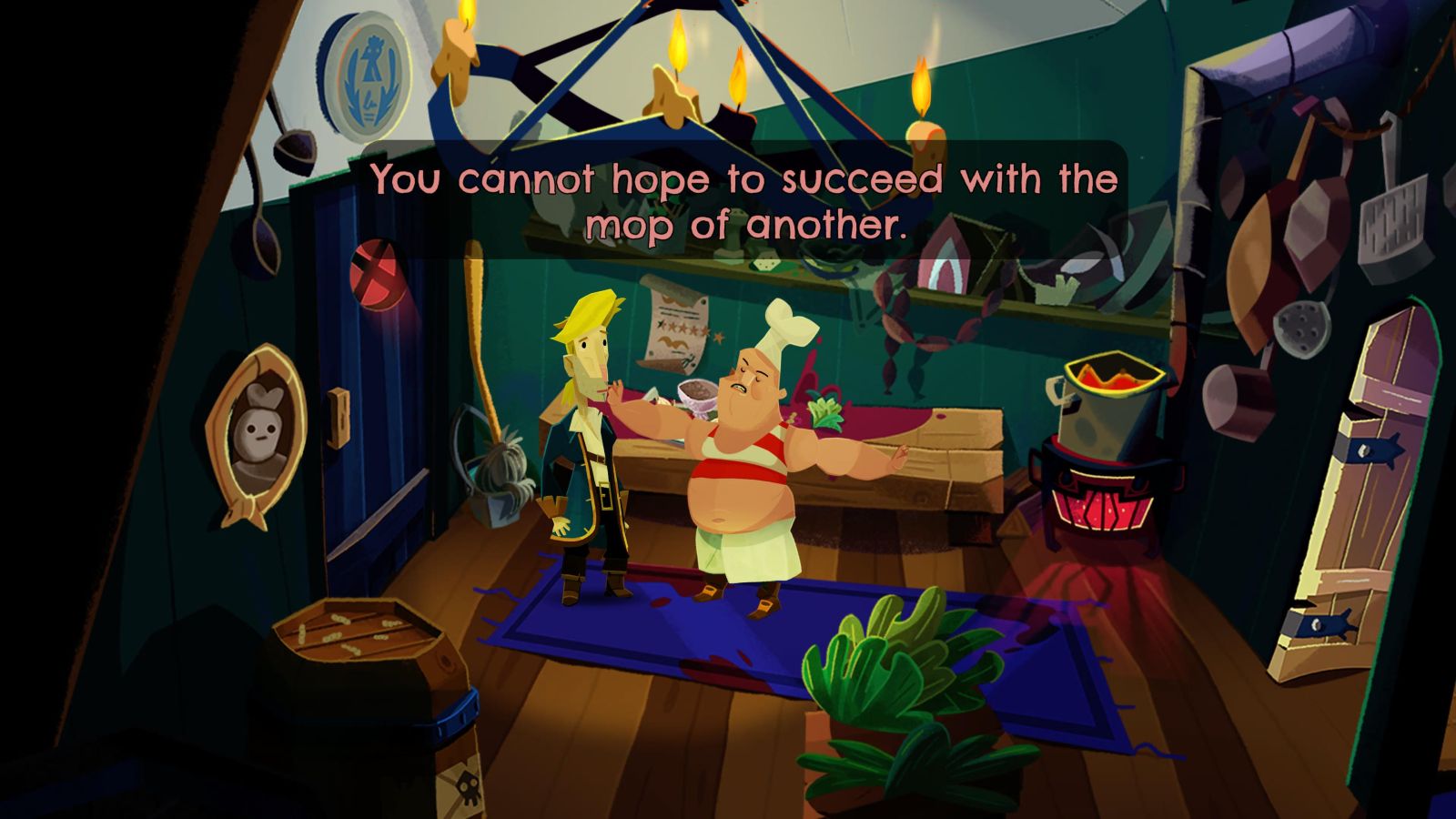 A big topic of controversy when the game was first announced was its new art style, and yes, I’ll admit that I was one of the many who had their doubts about how well it would translate. Thankfully, those negative thoughts were brushed aside within minutes of beginning my adventure, as when playing the art style just works. It allows the inner essence of Monkey Island to shine while updating the game to a more modern style. It retains the charm of these characters we fell in love with so many years ago. There may be a few out there who still scoff at the design and wish a more traditional retro look had been used, but I believe that most will learn to appreciate the style as the game progresses.

One gripe I do have for Return is that it was over too quickly. Even with exploration, the game only clocks in at 5 to 7 hours long, although Return does have quite a bit of replayability, unlike most point-and-clicks, as there are the two difficulties and many extra achievements you can unlock that you will most likely miss the first time through.  That said, if the game was much longer, then the story may have felt padded out and not have flowed as well. I suppose Returns is a good example of quality over quantity, it lasts just as long as it needs to tell its story, and not a second more. 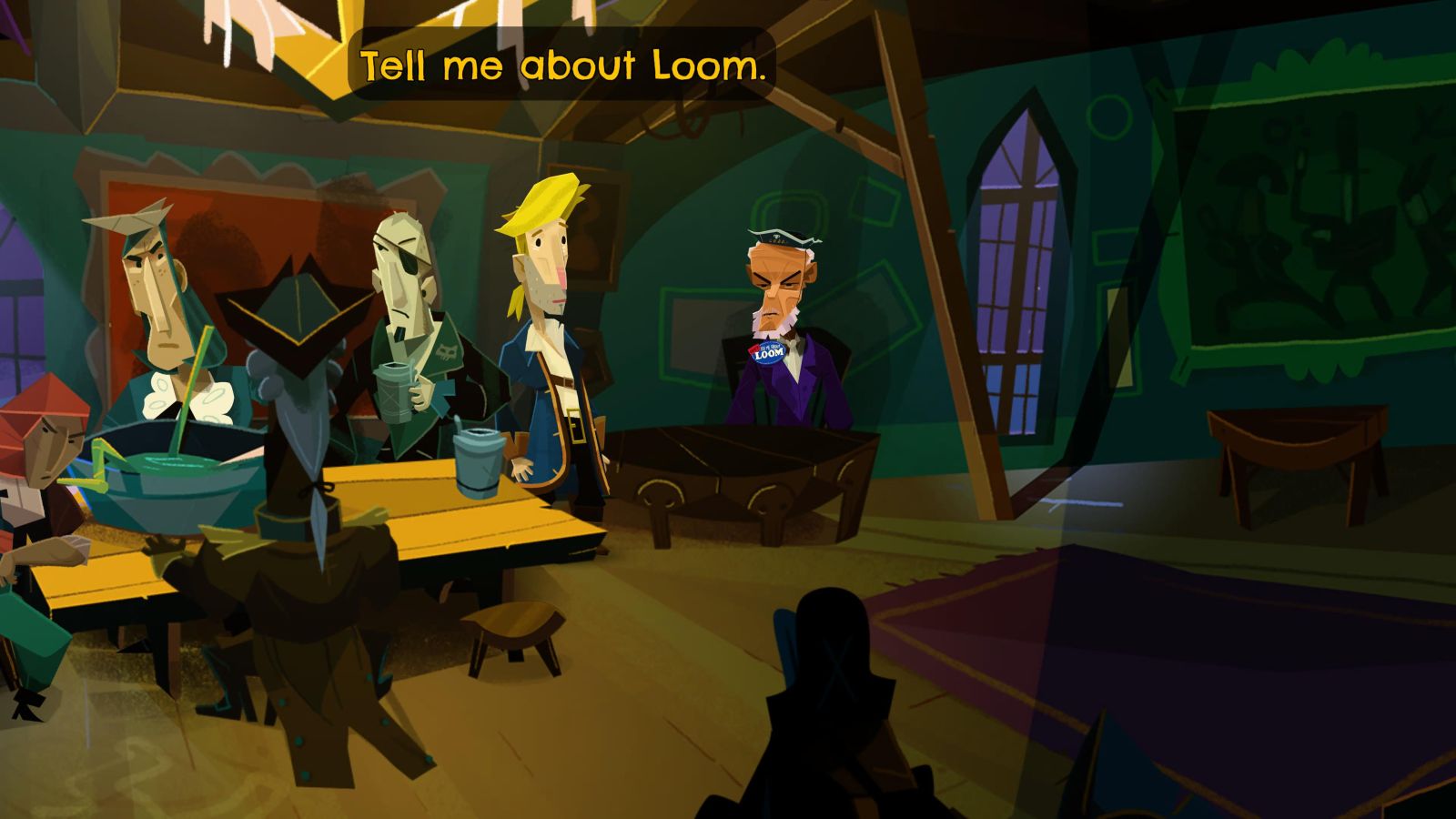 Speaking of replayability, for those into collecting, there are a ton of trivia cards hidden throughout the world. When you find a card, you can take a stab at guessing the answer to the question it poses. If you answer it correctly, then the card will stay in your trivia book. If you get it wrong, then you lose the card. Correctly answering one card even unlocks a random island to visit. Finding and answering the trivia cards is fun and truly tests your knowledge of the Monkey Island series, but newcomers are going to have a hard time answering every card correctly without taking to the internet for help.

Overall, I had a great time returning to the Monkey Island series, yet I’ll admit that it is rather bittersweet knowing that this is most likely the final installment of this iconic adventure series. Still, it is rather nice to finally have the answer to the question that I set out to uncover nearly thirty years ago.

Return to Monkey Island is a fantastic end to Guybrush’s compulsive search for the secret of Monkey Island and perfectly encapsulates what made these iconic games so popular in the first place. Despite the 30 year absence, not a step was missed, as Return is just as funny as its predecessors and seeing Elaine, LeChuck, Stan, and the rest of the gang together again is rather bittersweet. Charming characters – old and new alike, great dialogue, fun puzzles, an intuitive hint system, and a story which sees Guybrush visit multiple islands, all blend to make Return everything I had hoped for. I’m glad that I was able to finally uncover the secret of Monkey Island.

Richard Allen is a freelance writer and contributing editor for various publications. When not writing for Gaming Trend you can find him covering theatre for Broadway World, movies and TV for Fandomize, or working on original stories. An avid retro gamer, he is overly obsessed with Dragon's Lair. Chat with him via @thricetheartist on Twitter and @richardallenwrites on Facebook and Instagram.
Related Articles: Return to Monkey Island
Share
Tweet
Share
Submit