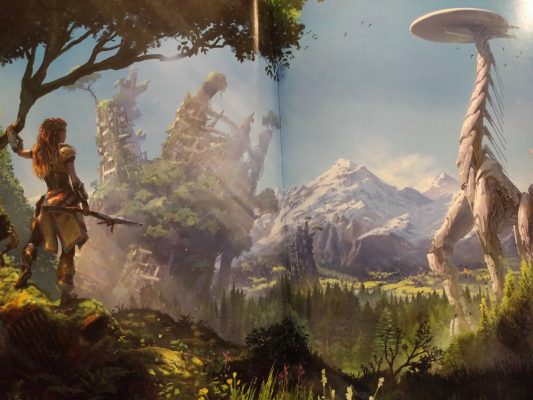 There’s no doubt that Guerrilla Games knocked it out of the park with their new IP, Horizon: Zero Dawn. Travis Northup’s review of the game highlighted the amazing technical detail afforded by the PlayStation 4 Pro’s 4K resolution and high dynamic range lighting. There’s no denying that this game is absolutely gorgeous. I was eager to get a look behind the scenes of the freshly-released title to see how all of it came together to create Aloy and her world.

Titan Books has teamed up with developer Guerrilla Games to get that behind-the-scenes look, assigning veteran writer Paul Davies to chronicle the journey (he handled the writing for the Art of Deus Ex, Tom Clancy’s The Division, Halo 4, Thief, as well as Assassin’s Creed Unity, Syndicate, and Black Flag) Starting with a foreword by Roland Ijzermans, Assistant Art Director for Guerrilla Games, the book is split into ten sections, including acknowledgements at the end. The first section is devoted to the Nora – the tribe that Aloy hopes to one day earn the right to join.

Aloy surveys the robot-dominated world in which she lives.

The Nora are a seeming amalgamation of Nordic, American Indian, and perhaps a dash of Irish cultures. Their background is interesting blend of primitive, real-world-modern, and futuristic, sporting compound bows with plasteel-esque armor plating alongside what appears to be mukluk moccasin boots. It’s an interesting juxtaposition that demonstrates the design pillars that Guerrilla was clearly shooting for in the aesthetics of Horizon.

Another possible version of young Aloy.

As she’s sprinkled throughout the book, there isn’t a heading dedicated to just Aloy. That said, there’s some fantastic backstory and artwork on how her character came to be. Once pitched as a younger girl, the team worked through some stunning concept art and reworking of the character until they reached a more mature Aloy, around whom they would then frame their narrative. Eight pages are dedicated to this iterative approach, spelling one of the best peeks into the process we could have hoped for, and a real highlight to this art book.

An alternate concept for young Aloy.

Also in the Nora section is a great look at the various armor loadouts for Aloy. It’s clear they went in with a specific set of criteria around keeping her hair a centerpiece, ensuring the armor is a blend of future and past, and retaining a decidedly tribal overall look. I purchased the Collector’s Edition, so I’m happy to see how two of those looks came together for the final product.

Beyond Aloy are the other various members of the Nora tribe you’ll encounter. Like Nora, they have a specific aesthetic they were aiming for. Gotilsyn confirms that the Nora view the machines as a resource to be harvested, provided by their deity – the All-Mother. It shows in their equipment as any use of recovered machine parts are merely practical armor and nothing else.

The many looks of Aloy and her armor.

The Nora section rounds out with a look at the locations they inhabit, as well as the culture they subscribe to. Concept Artist Eric Felten describes the most central of their cultural entities, the Proving, as the “calm before the storm” outlining it as both tranquil and also a celebration.

The Carja Sundom are people of a distant civilization that have gone in the opposite direction as the Nora, embracing technology. They’ve re-developed agriculture and established trade with their neighbors, building entire cities like their capital Meridian. This civilization still retains some influence of ancient civilization, but they’ve also embraced a decidedly avian motif, their armor often sporting sweeping helms that resemble wings, and banded armor that looks like inlaid feathers. They also seem to have a very meso-American influence as the more noble members of the tribe wear opulent helms that look straight from 2600 BC Mayan culture.

A beautiful juxtaposition of retro-futurism.

The Carja’s reinvention of civilization means they have built large buildings, markets, and even docks where their boats can bring in collected commerce and fish. The book also spends time on the culture and locations for the Carja, but that’s heavy spoiler territory — I’ll leave it for you to discover.

The Oseram tribe (even further in the spoiler zone) have a distinct advantage though their mastery of metalsmithing. Their characters look like a cross between Euro-Renaissance mixed and Russian Kossak. Their locations and culture are heavily influenced by their metal mastery, resulting in buildings with steel parapets and round metal domes — a quantum leap over the cloth yerts and basic structures of the Nora.

There is SO much detail that went into every clan

Naturally, you don’t build such wildly diverse groups without some people wanting to make their own path. These bandits also get several pages showing the variety of their armors, how their raider nature influences where they choose to settle, and the various ways they mark their territory as a warning to others.

Horizon’s Eslipse and Banuk clans receive similar treatment, each with their distinct and obvious influences. Each one is unique, and it’s amazing just how much work Guerrilla put into making each one distinct. All of that leads up to the real mystery — the Machines.

Not everyone is benevolent in Horizon: Zero Dawn.

Principal Concept Artist Miguel Angel Martinez showcases some fantastic early artwork for the Machines which looked more like piloted vehicles with a creature influence rather than the graceful beasts that made the final cut. Each mechanical creature in the game has its own personality, and the iterative nature of the most basic Watcher unit illustrates that nicely. The highlight of this section, for me, was the design of the Tallneck — the flat-headed beasts shown in the trailers as slowly ambling dinosaur-like creatures. They look like the combination of a giraffe and a brontosaurus, and once had what looks like a solar panel hanging off its back seemingly to power the beast.

The slow and powerufl Tallneck

One thing that was very clear from Martinez’s work is that they wanted to give each creature purpose. They aren’t just walking resources to be harvested. The horse-like creatures roam in herds, and the moose-like creatures with the large Blaze tanks on their back are as skittish as their real-world counterparts. Wolf-like creatures are aggressive, crouching as they menace Aloy, flanking for the kill. It’s great when you can see concept artwork like this turn into something that translates into gameplay.
Ruins, the final chapter of the book, takes a look at what would happen if the world were to go untended for 1000 years. What sort of erosion would weather, pressure, and time bring to a once majestic cathedral? Would its beautiful parapets be more than a shadow of what they once were? To explore this idea, the team would concept out a town with its modern streets and structures and then iterate it across time, softening the hard lines and showing the gradual reclamation that would naturally occur. One particular picture shows a downed AWACS plane — something that might as well be a steel dragon to these proto-future primitives.

Every creature has personality and character.

So much of this book is devoted to the backstory of the individual clans, but the expansive section on the machines is a monumentally bright spot. It’s the section that most people will likely make people most interested in the book, but there’s so much more on display here. The two-page layouts are frequent in this book, and it’s a massive step up from most art books that often have postage stamp-sized pieces. I’d be hard-pressed to find a favorite spread as there are so many.

The Art of Horizon Zero Dawn

When developers allow this level of access behind the scenes, we get a look at how incredible games like Horizon Zero Dawn are created. Titan Books has translated that story into an incredible journey. At 192 pages, this hardback book is a beautiful and packed from cover to cover with incredible artwork. I can’t find a single thing to call out in a negative way with this book -- it’s simply perfect.

Ron Burke is the Editor in Chief for Gaming Trend. Currently living in Fort Worth, Texas, Ron is an old-school gamer who enjoys CRPGs, action/adventure, platformers, music games, and has recently gotten into tabletop gaming. Ron is also a fourth degree black belt, with a Master's rank in Matsumura Seito Shōrin-ryū, Moo Duk Kwan Tang Soo Do, Universal Tang Soo Do Alliance, and International Tang Soo Do Federation. He also holds ranks in several other styles in his search to be a well-rounded fighter. Ron has been married to Gaming Trend Editor, Laura Burke, for 21 years. They have three dogs - Pazuzu (Irish Terrier), Atë, and Calliope (both Australian Kelpie/Pit Bull mixes).
Related Articles: The Art of Horizon Zero Dawn
Share
Tweet
Share
Submit