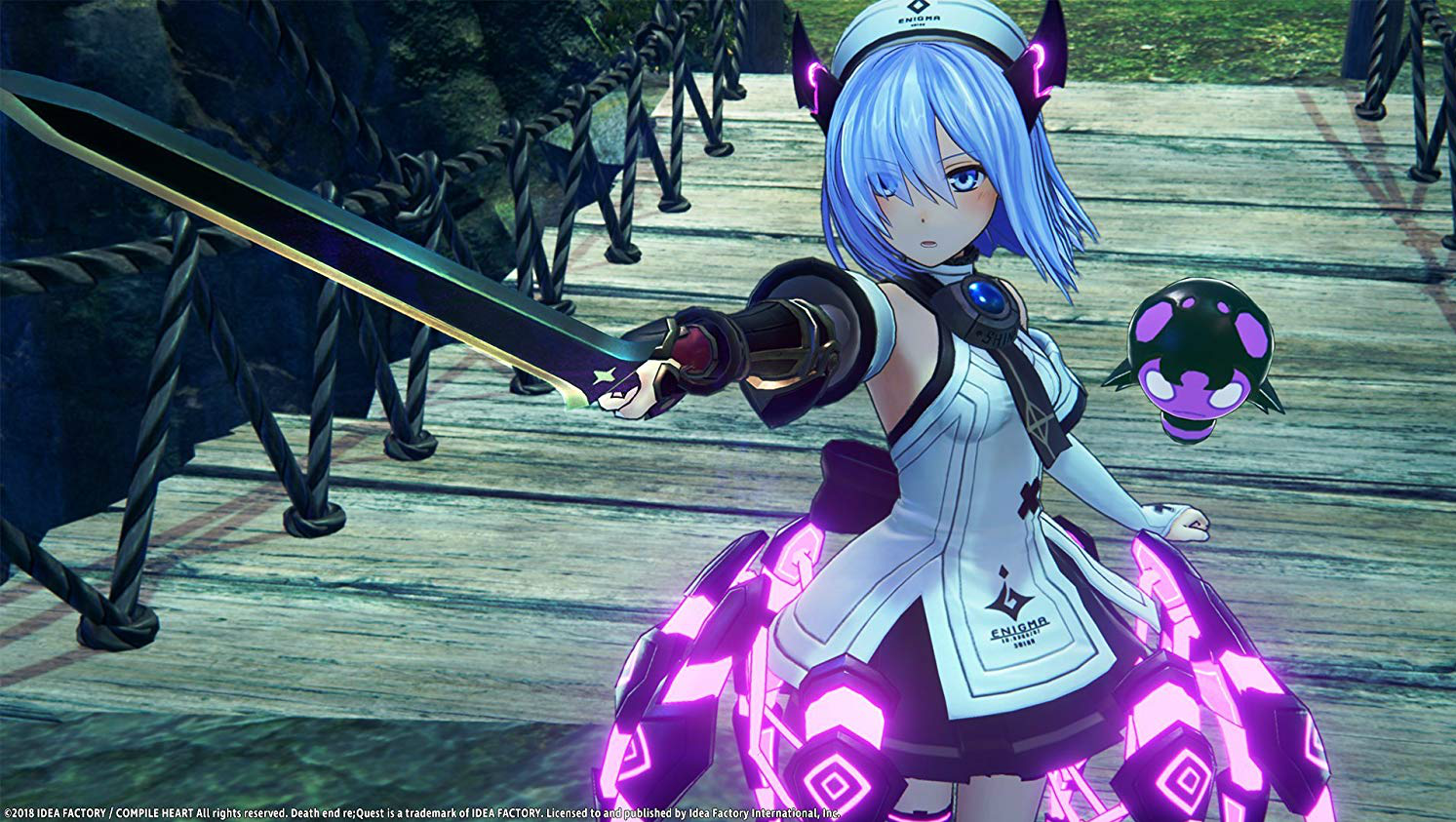 When you play a JRPG, it is very hard to be surprised or shocked anymore. There is bound to be a few barely dressed women adventuring in epic fashion while maintaining a confused, ditzy worldview. There is very likely a game-within-a-game aspect to the storytelling, or at the very least a glut of gaming references. Amnesia? You betcha. Oh, and if you love dialogue, there’s nothing better.

There are plenty of JRPGs that shy away from what I described, but the above paragraph basically describes the entirety of Death end re;Quest. With a name like that, it is easy to know what you are getting into. However, the game does feature a few innovative ideas in the battles themselves. While not a fantastic product overall, the innovations are intriguing enough to make one want to keep playing if for at least a short while. 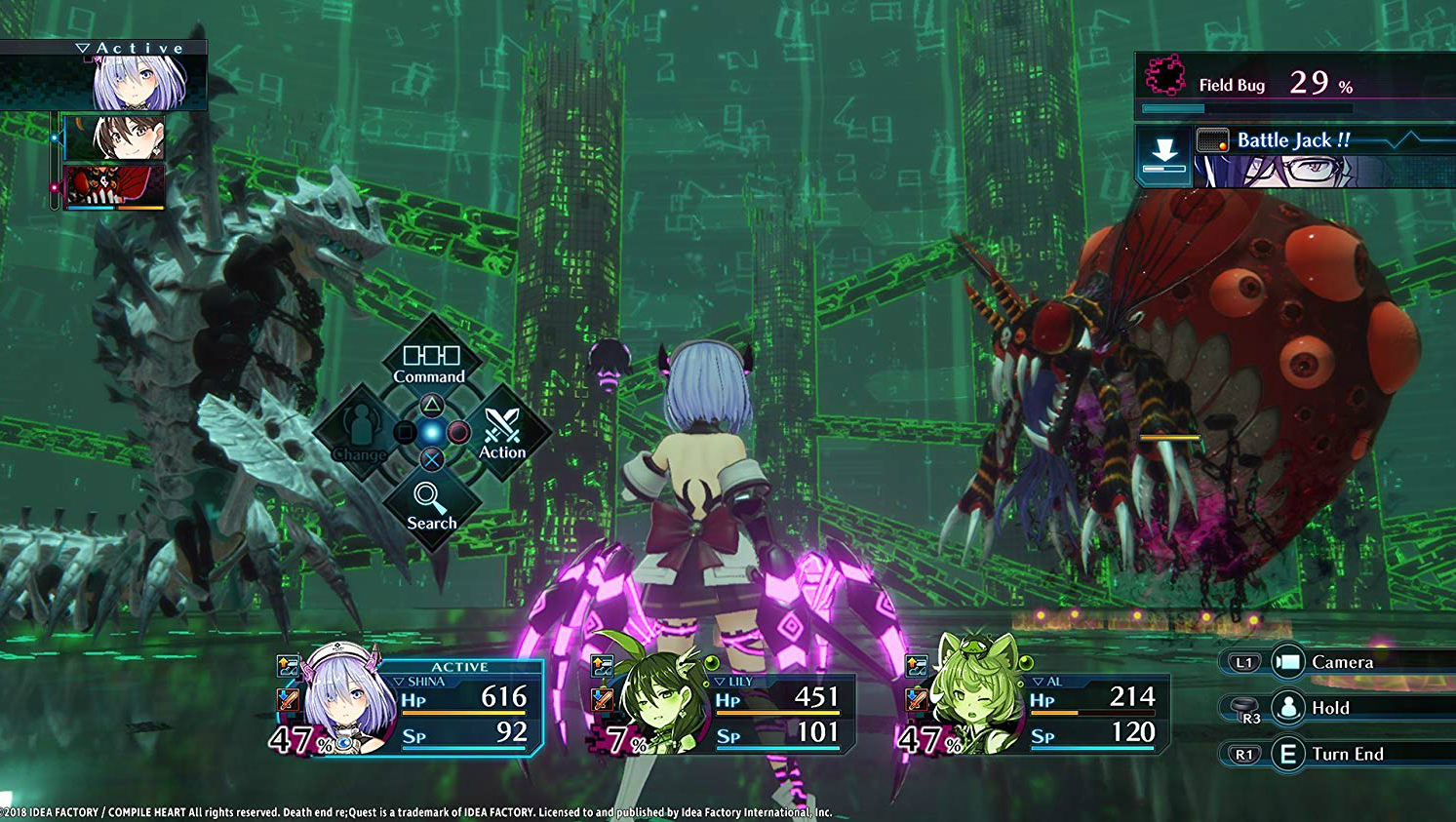 Death end re:Quest revolves around Shina, an amnesiac and a generally confused girl who suffers a severe trauma and wakes up alone in a strange place. The world is glitchy and digital, and Shina is attached to a set of mechanical spider’s legs that she cannot explain. A voice from above, mistaken for God, reveals that Shina is trapped in a game she helped create, and has been missing for a year.

The world around her is falling apart, but Shina must complete the game from within, though the narrative is vague about if this will save her, or do anything at all. The story is not very forthcoming with a logical pathway from the start, and this comes about despite an absolute overload of dialogue. As a cutscene ends, a dialogue sequence begins, and back to cutscenes over and over again until the monotony is broken up with a battle or two. 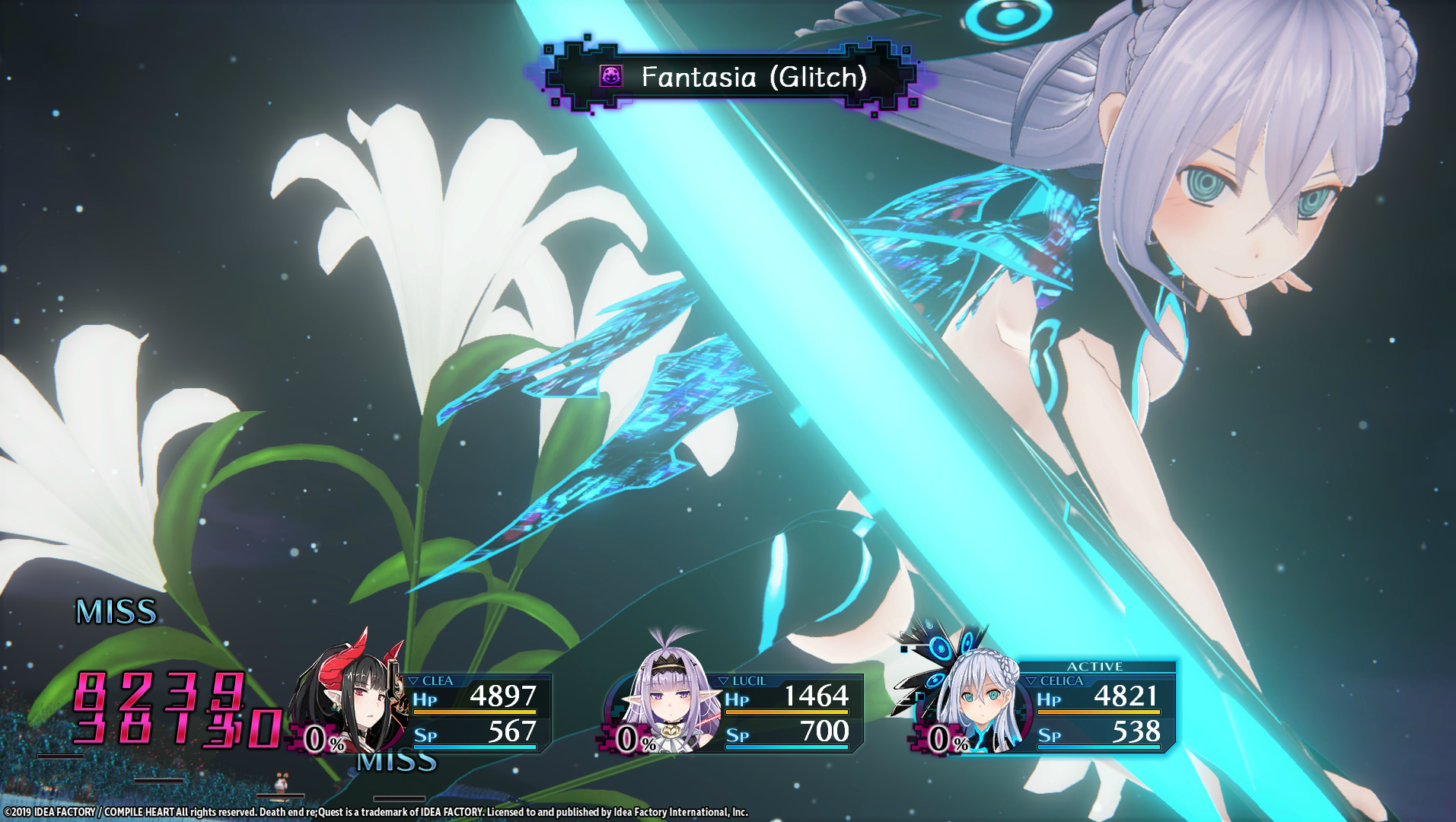 The battles are very interesting, but also incredibly simple. The simplicity of the system makes the battles a little boring and thus the game starts to sour quickly. However, the mechanics of fighting make up for it once you are able to get into the full swing of things. The characters can move anywhere in the fighting arena, like a ball-in-hand in billiards. The enemies, when struck, will fly in a straight line until they strike an invisible wall, and bounce off, damaging anything they come in contact with and themselves in the process.

The strategy comes with combining the attacks you use with angles that will maximize effectiveness for each strike. There are also a number of orbs on the ground during battle, usually bunched together. You can either hit the enemy into the orbs, destroying them, or you can pick them up yourself. If you do, you take damage but also fill a percentage gauge. At 80%, the characters go into a frenzied mode that, almost predictably at this point, does mean the girls become almost entirely nude and simultaneously extra powerful. At 100%, the characters will collapse and be useless for the rest of the battle. 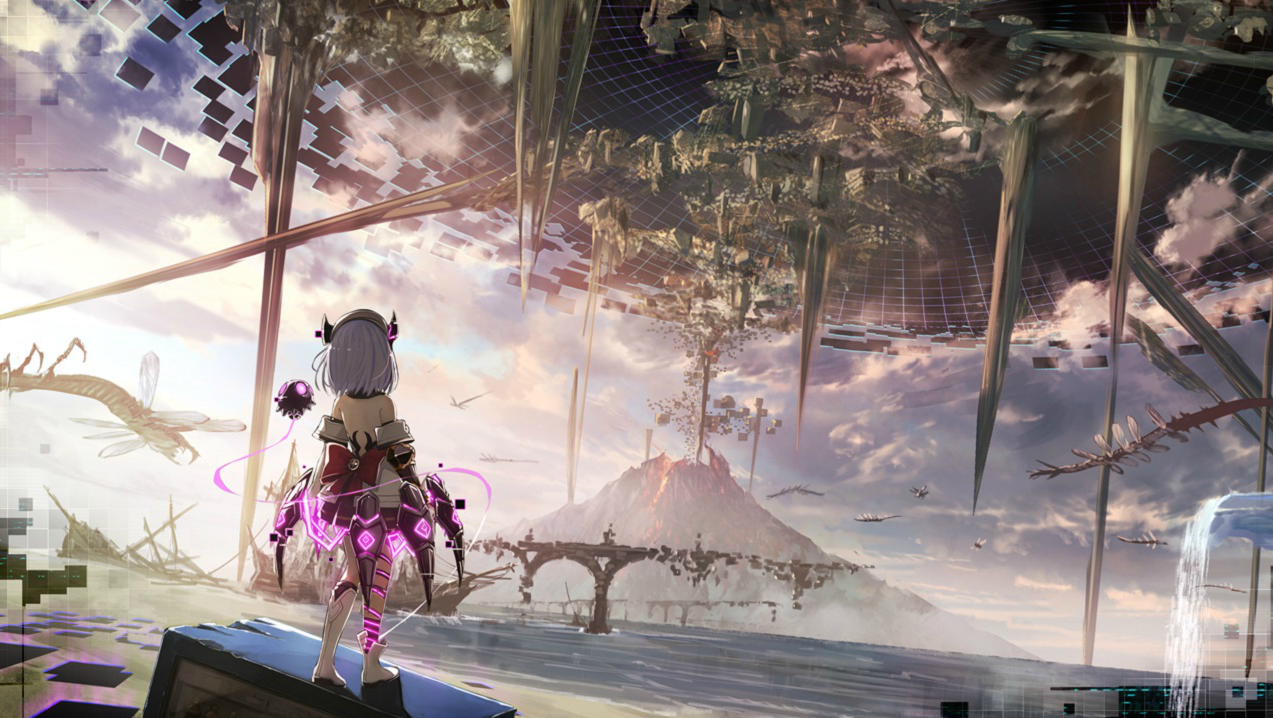 Each fight is odd and a little different, based on how you choose to play it. The more characters in your party, the more hectic battles become. In addition, the voice in the sky (who turns out to be a member of the development team) embodies a tiny bear creature and aids you in battle from time to time by remaking the game’s genre, for example from RPG to first person shooter, allowing for an additional attack.

Sadly, this function doesn’t really do much except introduce another avenue for what ends up being a fairly standard attack. I would have been much more impressed if the game had morphed for the entire battle into a different style of game. Also, a bit of dialogue early in the game suggests that dying would have strange and unknownable effects on the gameplay, but I was sad to learn that when you die in the game, it is just a standard game over. 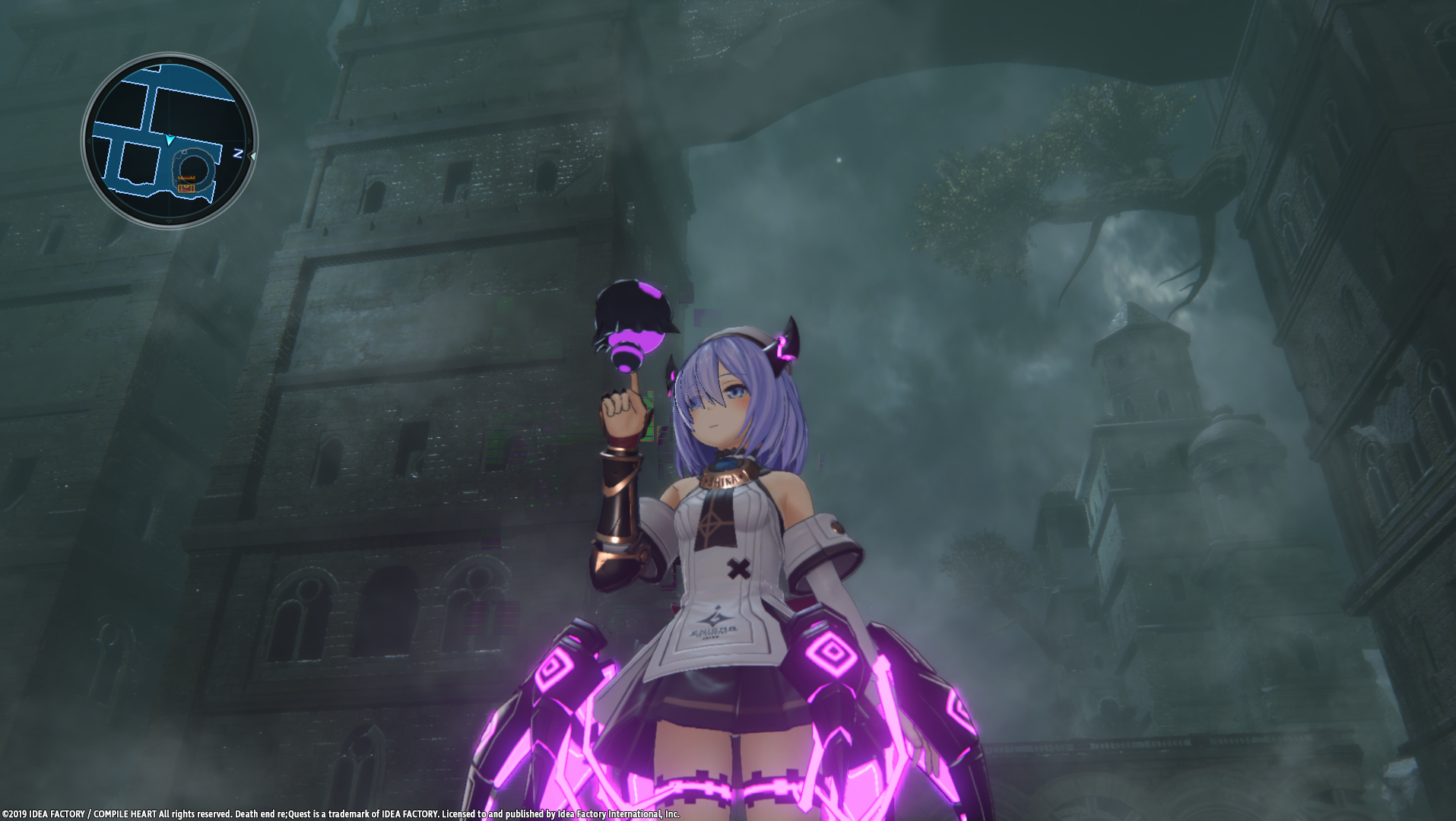 The game lacks a bit in terms of atmosphere, especially early on. You spend a lot of time in empty rooms and corridors, and everything sort of looks the same. There is very little detail or variance in anything the game presents. The enemies are not particularly interesting either, and the character designs are also predictable and bland. While the actual graphical quality of the game is fine, and the artwork is passable, it just lacks anything that stands out.

The glitchy effect within the game is the absolute worst feature. Everything is always kind of jumping and fading in and out, with colorful digital interference fading in and out of view. It is annoying and gets old very fast, but it also jumps around in stupid ways as you move from empty room to empty corridor in absolute confusion. It doesn’t go as far as to interfere with the gameplay in anyway, but it is annoying and distracting to say the least.

Death end re;Quest is not a terrible game, but it certainly doesn’t do much to stand out from a crowded and trope friendly glut of JRPG titles. The battle mode plays like a game of pool and has a lot of interesting features, but the writing is tired, the characters are overly sexualized and mentally deficient as always, and the game is set in a bland world with little detail or points of interest. Death end re;Quest is another game for fans of long dialogues leading nowhere.

Patrick Rost has been with Gaming Trend since 2013. At first focused on sports coverage, Patrick has gone on to cover a wide range of games and other products for the website. Outside of Gaming Trend, Patrick writes and records music, grinds perpetually in Elder Scrolls Online (PS4), and lives day to day with his two dogs, Bob and Stella.
Related Articles: Death end re;Quest
Share
Tweet
Share
Submit