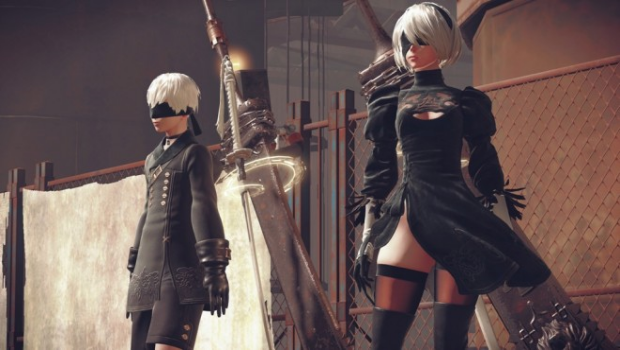 Have you ever wondered what it would be like to be an android trying to retake planet Earth from its alien invaders and their army of machine life forms? If so, Nier: Automata is the game for you. In Nier: Automata, all of the remaining humans have fled Earth to the moon in order to survive an invasion by an alien race. You take control of a new model of elite android soldiers, named 2B. Your quest is to defeat the machines and their alien overlords, all for the glory of mankind.

Nier: Automata seamlessly blends multiple styles of video games into one, while never becoming too busy or muddling up the experience. One moment you will be playing the game’s main style, which is a third person RPG, and the next you will be playing a top down shooter or even a side-scrolling platformer. The second playthrough takes it one step farther by adding hacking mini-games that are used in combat to damage enemies, or to open locked loot chests. The game transitions between these styles in such a smooth and satisfying way that it reaches a delicate balance of play types most games can’t obtain, and creates a truly special experience.

2B and 9S have a run in with the Mad Songstress

Combat in the game is diverse and enjoyable. You can clearly see PlatinumGames’ past work in high intensity combat titles, such as Bayonetta and Metal Gear Rising, represented here, as the combat is fast paced, impactful, and stunning. Whether you are engaged in melee combat, mech fights, or top down aerial battles, the game provides an impressive and thrilling experience. Some of the fighting can get repetitive after hours of grinding, especially when you are on the second playthrough. PlatinumGames has done a great job of countering this by adding new abilities and tactics to the way you fight, depending on which playthrough you are on.

While Nier: Automata is a sequel to 2010’s Nier, the story does not rely on much from the original, taking place thousands of year after the event’s of Nier’s fourth ending. PlatinumGames has done an excellent job at setting up the world at the beginning, and besides a few small elements, no prior knowledge of the series is required to get the most enjoyment out of the game.

2B and 9S taking out some machine lifeforms

However, Nier: Automata is a game you simply cannot play just once if you want to get the full story. With an impressive 26 different endings, the game is begging for multiple playthroughs; you can’t even experience the game’s true endings until your third go at it. The first playthrough gives you the basic story of the game, as seen through the eyes of the game’s protagonist 2B, but the second playthrough builds (and breaks) the foundations and fills out the world and your enemies’ motivations far more. The third playthrough is a complete must, as it adds a whole new storyline that is not experienced in the first two playthroughs.

There were points, such as the middle section of the third playthrough, where one might find themselves a little exhausted on some of the game’s mechanics. The hacking mini-game, for instance, is enjoyable every once in awhile, but in sections where you are repetitively forced to hack difficult systems, the allure of the mini game fades rather quickly.

To upgrade your characters you will have to collect plug-in chips to place inside your android’s body. This is a very fun, original, and reasonable way to improve on one’s character in this universe. You will be able to add anything from additional health chips, item auto-use chips, or even chips that grant your character vampirism, which in this case doesn’t mean fangs but additional health when you damage enemies.

The view in the desert

The world in Nier: Automata is quite enjoyable to explore and hits a sweet spot in size that makes it easy to explore fully, while still holding on to some of it secrets. Even forty hours into the game, you won’t have come close to finding everything Nier: Automata is hiding in its post-apocalyptic wastes. Walking into a new area for the first time is incredible. The Amusement park, for instance, is such a shock to see your first time and leaves a lasting impression that never really seems to fade.

The characters in Nier: Automata are diverse from one another, which is the encompassing message of the game. What is life for an android , is it meant to be questioned, do they have souls and feelings, and are they different from machines? While they initially seem to be very stiff, the characters fill out and grow at an enormous rate over the course of the game, and by the end you really feel a connection with them. Operator 60, an NPC that communicates with you on a regular basis, exemplifies the importance of the side characters of the game. Her bright and bubbly attitude is vastly different than anyone else’s which adds a view into the life of the androids and how varied their personalities are.

The area in which Nier: Automata falls flat, no pun intended, is the bland and uninspired textures of the game’s environments. While the character designs are very well done, with most of the characters looking impressive and lifelike, almost all of the games surroundings look very dull and monotonous. All the buildings in the games lacked any life or diversity, save for a few set pieces.

The soundtrack in the game is sensational. Composer Keiichi Okabe returns to the series, after composing the music for Nier and Drakengard 3, and brings a symphony of beautiful and powerful tracks that set the mood and direction of the game. Walking through the amusement park in the game is an absolute joy thanks to the park’s incredible theme. The game even turns whichever song is playing into an 8-bit version when you commence a hacking mini-game.

You don't really see games with the level of Polish that Nier: Automata has. The combat is smooth, the story is captivating, the world is alive and evolving, and it's all backed up by an incredible soundtrack. The game does lack with its textures and can get repetitive at times, but even with those problems the game sets itself apart from most on the market today, and it’s one of the more original and enjoyable titles to play.

Zach has been a gamer ever since he picked up a PS1 controller and played Asteroids for the first time. From FPS games to Point-and-click adventures, Zach knows no genre that he can't get into. When not playing games, he spends his time looking at the newest computer components on the market and dreaming of a day when he can buy them.
Related Articles: NieR: Automata
Share
Tweet
Share
Submit