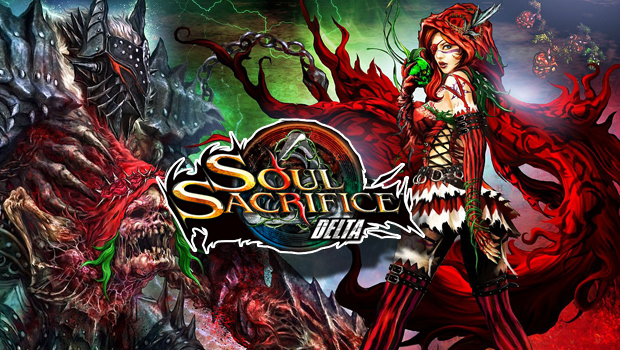 Have you ever heard that old saying that an artist never really finishes his work, he merely abandons it? Well, it would seem that the developers at Marvelous Entertainment and SCE Japan studios weren’t quite ready to abandon this one yet. Soul Sacrifice Delta is the semi-update, quasi-sequel to the original 2013 title that tries its utmost to right every wrong that Soul Sacrifice has ever made and, in many ways, it succeeded.

To be completely honest, I was more than a little confused when coming into this so I’ll just do my best to lay it out plainly for you. If you’re new to the series and you’re looking to jump in, make sure you start with Soul Sacrifice Delta. This title has everything from the original (Story, Game Modes, Items, Characters), but with all the new upgrades and additional content exclusive to this version. Basically, Soul Sacrifice Delta makes the original Soul Sacrifice obsolete.

Fans of the first title who either exhausted ways to max out their character, or those who simply completed the story and found themselves hungry for more, will be happy to know that SSD does contain a plethora of new content to keep them satisfied.

Everything great about the original Vita exclusive remains intact, including its highly engrossing story and exceptional production value. The game hits the ground running and starts with you trapped in a cage, witnessing the murder of your fellow prisoner at the hands of a demented and powerful sorcerer named Magusar. It’s clear from the looks of things that you’ll be next if you don’t find a way out. Fortunately, an obnoxiously snooty talking book named Librom presents you with a means of escape: read from his pages, learn to be a strong sorcerer and challenge Magusar to the death.

After each level, you’re rewarded items that can be equipped to execute new spells based on your performance. Trying out the ever-growing and increasingly powerful arsenal of spells helps keep things interesting, and the promising allure of finding rare items has the same addicting appeal found in similar action RPG games such as the ever popular Diablo series.

The levels of SSD are divided into the different chapters contained in the Librom book. Selecting a chapter will put you in control of the author’s memories that are contained within, allowing you to gain the weapons and experience needed to defeat Magusar. Upon completing each new chapter, you’re treated to the next piece of the story, which is all narrated with solid voice acting and illustrated using beautiful drawings that come to life as you turn each page. The whole thing almost feels like an interactive storybook (you even turn the pages by swiping your finger on the screen), and it’s an original way to move through a game’s narrative.

The first Soul Sacrifice already had incredible production value. The game is a true testament to just how far great art direction and a gorgeous soundtrack can take a video game. From the moment of the first opening cinematic, I was immediately drawn in by its unique blend of fantasy horror and action, and the fully orchestrated soundtrack is so epic that every second sounds like a clip from Ben Hur. But it’s the graphical updates found in Delta that really make it shine. The textures are more detailed with smoother edges than the first, making the characters and environments feel dramatically improved and easier to enjoy.

SSD also makes some major changes to the character customization system, bringing it to a level of detail that is equal parts intimidating and addicting. Figuring out which spells combine best for which situation and knowing when to use specific combos to defeat your enemies before choosing which hand you want to treat the soul with can be…daunting. It’s the sort complex customization that may scare away newcomers, while at the same time making devoted fans feeling like members of an exclusive club.

Possibly the most notable addition is the new Grim faction. Without going too much into detail (too late), the new Grim faction adds another level of customization to the already towering list of options. Now, joining any of the three sorcerer factions (Avalon, Sanctuary and Grimm) will impact what benefits you receive when either sacrificing, healing or leaving a soul to fate… I’m sorry, it’s all really confusing. You’ll just have to trust me, the new additional faction is a major overhaul to the dynamics of the game.

There really are a lot of quality things going on in Soul Sacrifice Delta. The story’s great, the presentation is exciting and the level of customization is deep enough to warrant its own college course, which is why it’s so utterly disappointing that the gameplay is still as repetitive and grinding as ever. Okay, yes, repetition may be a naturally inherent quality in the monster hunting genre, and perhaps monotony in combat is simply par for the course; I just really would have appreciated some more thrills in the gameplay. Oftentimes the new stages come off feeling like wash and repeat versions of the levels that came before it.

Soul Sacrifice Delta is a difficult beast to peg down. On one hand, it’s a vastly superior version to the already impressive Soul Sacrifice that came out last year, but on the other hand, it’s fundamentally the same game with the same monotonous gameplay. If not for the engaging story, incredibly deep customization system and beautiful presentation, SSD would not be worth your time. But with so many great qualities working in its favor, it’s still one of the best action RPG experiences available on the PS Vita.

At the end of the day, Soul Sacrifice Delta is a great looking game with an engrossing story, killer soundtrack and an in depth customization system - the only thing really holding this impressive handheld title back is the repetitive nature of its monster hunting gameplay. If you can get past its faults, then you’ll find yourself playing one of the most engaging and satisfying action RPG’s on the PS Vita.