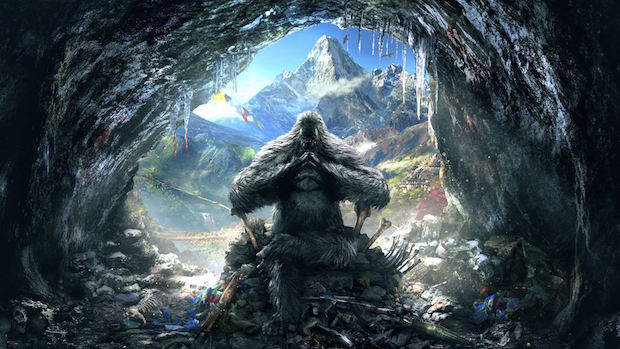 Far Cry 4 was one hell of a product upon its release last November, and it has remained something players hop back into just to get up to nonsensical business. The DLC direction of Far Cry 4 has been interesting to follow as many were curious if Ubisoft would head in the silly direction, or instead settle into  a more serious tone. Their newest content pack, Valley of the Yetis, screams silly from the very second you finish reading its name. Being silly can only take you so far; it is up to the new gameplay additions to really sell Valley of the Yetis to people that have put Far Cry 4 down.

You are introduced to the bit of content by seeing the star of Far Cry 4, Ajay Ghale, thrust into an icy environment, with no knowledge of his surroundings. His goal is to find the pilot he crashed with when he eventually runs into a group of people that do not meet his arrival with a smiling face. After some stabbing and archery practice, you are introduced to the story’s arch villain, Master Sandesh. Sandesh wants to leave his home immediately, something Ajay cannot manage to do since there is no radio connection with the outside world. Understandably, Sandesh’s only solution is to attack Ajay.

These attacks are very reminiscent of tower defense battles in other games as you find yourself upgrading the headquarters you establish. The inside of your headquarters looks very similar to the inside of other buildings found in the main Far Cry 4 game, but the outside definitely does not. You can purchase things such as a barrel trap that places red barrels up in the trees. The barrels then eagerly await a shot from you so that they can fall to the ground and cause damage to whatever may be under them. You can also purchase things such as a minefield — easily the most entertaining upgrade. There is a lot of hilarity to be found within Far Cry 4, but watching enemies simply stroll over an open area and then go flying 20 feet due to a random explosion? That’s a predicament which is just begging for laughs.

Of course, the main crux of this invasion comes when it begins and you must defend your building on the fly. The combat within Far Cry 4 was incredibly solid and remains so, so taking part in it for a prolonged period is not something to complain about. The only issue is that these invasions feel a bit easy. The only time I experienced death was during the very last night of defending, and that was due to a dual yeti attack. The concept of integrating tower defense into Far Cry 4 seems like a bad idea, but Ubisoft managed to integrate it near flawlessly.

As previously mentioned, Valley of the Yetis takes place within a snowy place atop the Himalayas. Because of this, the visuals are very similar to the ones experienced when you visited the snowy region in the full game. That being said, the world looks very nice and Ubisoft did a good job of creating a brand new world, even though some environments are definitely repeated. For example, you will see the same camp multiple times. Despite that, the world is pretty large, especially for being a piece of DLC.

In hopes of getting you to further explore that world, Valley of the Yetis has side objectives and weapons littered everywhere. You do not carry anything over from your main Far Cry 4 save, meaning you must unlock all the weapons again. You do this by completing story missions as well as finding them located about the region. It is a fairly novel idea, but finding a weapon you have previously unlocked in another version of the same game can feel very frustrating. On top of that, the actual side objectives are very bland, repeating multiple times. Out of what seems to be around 25, at least half are “steal the truck and bring it back to your base” missions. There is a certain variety that is sorely lacking in the side objectives of Valley of the Yetis.

The reward for completing these missions is the same as it is in Far Cry 4; money and experience. If you already have a ton of money and experience, have no fear as Valley of the Yetis strips you of all your previous hard work.  This is one of the most disheartening things about the Yeti experience. You run into quite a bit of combat, meaning the abilities you unlocked in the main game would come in handy. You consistently find yourself awkwardly leaping onto your enemies with thought of executing them, just to realize you no longer have that upgrade. You do pick up experience very quickly, meaning you can get your unlocks back by the final thirty minutes of DLC, but the issue persists throughout a majority of the expansion.

I would be remiss to not even mention the beast that the DLC is named after, the damn yetis. The yeti acts as a sort of Berserker from Gears of War. It charges after you, forcing you to dodge out of the way. You weaken them by dropping exploding C4 within its vicinity or laying a mine for it to step on. They are a pretty fun enemy addition, albeit their impact seems a little smaller than it probably should be.

One other new gameplay emphasis is the use of the wing suit. You find multiple high mountains (you are in the Himalayas, after all) that are just itching to be leapt off of, not to mention some story missions that require you to use the suit. These sections act as some of the most fun to be had within Valley of the Yetis.

Far Cry 4 - Battle of the Yetis

Many great games struggle to release solid DLC, but Far Cry 4 has avoided that issue very well. Valley of the Yetis has a few issues, the major one being the stripping of all your hard work in the main game, but it is still a ton of fun. The tower defense-esque elements added are integrated well and do a great job of pushing forward more Far Cry 4 combat, easily one of the best parts of the game. While there are some slight rough edges that could have been sanded down, Valley of the Yetis provides a great reason to hop back into Far Cry 4.