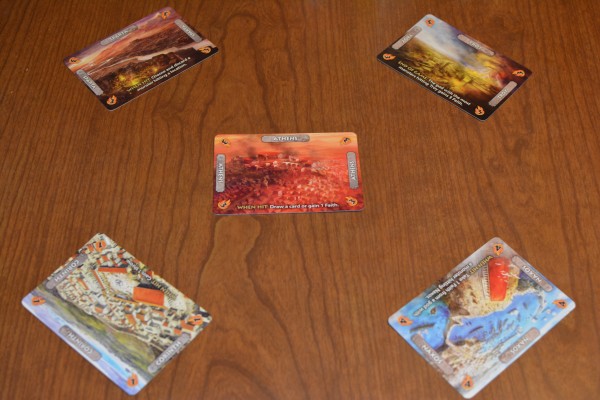 Playing a god is not a novel concept in the world of board gaming. Whether you are building an empire, expanding a civilization, or fighting a war, board games allow you to play as a god, an all-seeing entity capable of controlling legions of men or a horde of monsters. In that regard, Secret Base Games’ Monstrous is not ground breaking. Yet, what separates Monstrous from the cavalcade of games before it is the Monstrous’ ability to allow you to actually be a god by casting your minions down to do your will. Literally.

In Monstrous, you play a Greek god. Disgusted by the Greek populace who seem to be spending their time living their lives rather than worshipping your greatness, you have decided to unleash a vast array of creatures onto the unsuspecting citizens below. Nothing inspires faith more than a little fire and brimstone. As such, you will toss, throw, flick, and pitch your minions onto the playing area. From there, they could land on a city, gaining you faith points which act as the game’s scoring system. They could also hit other monsters, which could further add to your worship total or provide different effects such as removing monsters.

Short game set up with Athens in the hot seat.

Before you even play, it’s impossible not to notice the quality of the game’s illustrations. Secret Base Games went to great extent to immersing you into the Greek theme through vibrant illustrations on both the city locations and the cards of the mythical beasts. The components really are top notch, though the location cards could be on thicker stock. They can be moved through the tossing of the cards. My dragon may be powerful, but I doubt he’s moving the entire city of Troy around. Secret Games also includes player aide boards for every single player which is a nice touch considering I’ve come across countless games where you must constantly share the one or two player aides provided. Each god card also contains the ability of location on one side and the monster on the other. This is nice as the boards can quickly be covered making the special ability impossible to see. Finally, the faith tokens are thick are well made, though an extra sheet of those may be needed in longer games. Trading out toekns was common in the advanced scenarios.

Monstrous comes with 12 location cards. Five of these are selected for the game. Different cities have different effects which not only affect gameplay but game length as well. One city is in the center with the other four aligned around the corners. Game play then begins with one player tossing one of his or her monsters onto the playing area in an attempt to hit one of the cities or, as the game progresses, one of the monsters. Dexterity plays a huge role in the game and can often thwart the best strategies. In my first run-through, the game’s chaos came from watching the cards careen harmlessly across the table. Eventually, though, everyone found their preferred style (for me, think skipping stones) and the game become competitive.

There’s no doubt that luck is the predominant factor in the game. The glossy cards will often slide until they finally come to rest. A perfect toss can hit another card just right, slide, and end up missing any target. In one of our games, my visually impaired daughter won handily simply by hitting three really good combos in a row. It’s refreshing to see a game that won’t be dominated by your skilled tacticians every single time.

This doesn’t mean strategy doesn’t play a role. Everyone has the same deck of creatures. Some, like the Siren, are best played early to benefit from their defensive bonuses. Others, like the menacing dragon, should be played late to take advantage of the amazing offensive powers. One interesting innovation is the ability to use a single creature in multiple ways. Every creature’s card  has a basic attack value side that is the same as the others. The other side of a creature’s card has a special attack unique to that creature. This adds some nice replayability to the game, though it would be nice if the basic attack values were somewhat different since it seems odd that a relatively small harpy has the same attack value as a colossal cyclops.

Behold the carnage in and around Athens.

Speaking of replayability, this game has it covered. The review copy I received listed 12 different scenarios you can play of various lengths. If 12 doesn’t sound like a lot, I did the math for you. There’s 792 card combinations you could play with this game. That’s quite impressive. You’ll want to start with the shorter scenarios to practice tossing the cards, since the gameplay itself is easy to catch on to. Once you got the hang of it, you’ll want to break out the Tartarus location card.

With each hit on Tartarus you get to draw from the legendary monster deck. This deck includes Medusa, Chimera, and the Minotaur, each with powers that dwarf the standard game monsters. They are great fun, but none can compare to the carnage caused by the Kraken. The Kraken’s special ability allows all players to toss two cards each that represent the Kraken’s tentacles. These tentacles remove hit monsters which can clear the table pretty quickly. How can you not like a game that allows you to bring out your inner Liam Neesen to the table to yell, “Release the Kraken!”

The game ends at the end of the turn in which someone has run out of cards. Since some special monster powers allow you to take extra throws per turn, someone can exhaust their deck before the rest of the players. The person with the most faith at this point wins with a few different tie breaking options to do through just in case. One nice touch included by the designers was the acknowledgment that younger players may need help. The rules allow for some modifications to be made for those younger players including rethrows or faith bonuses. However, considering I was schooled in one game by an eight year old, maybe there should be modifications for the older players as well. Still, it’s a nice addition to a game that’s bound to appeal to various age groups.

Having no exposure to dexterity games before this, I was a bit leery. I tend to gravitate towards games of great complexity and depth. Monstrous is not this type of game at all, but that’s not a bad thing. It’s simple, quick, and very entertaining. It can also be unforgiving. The theme fit so perfectly that it is hard for me to imagine using any other theme for the game. I’ve played many quality games that play fast, but they tend to get on the board infrequently as the gameplay can be repetitive. The variations in this game will keep it fresh and engaging for a long time. There’s a nice balance of dexterity and strategy involved. You don’t need to be great at both or either to be successful at this game. You get a remarkable amount of fun in such a small box.

Monstrous: The Game of Mythic Mayhem
Designed by: Kim Brebach
Published by: Secret Base Games
Players: 2-5 or teams of 4-8
Ages: 10 and up
Time: 15-30 Minutes
Mechanics: Dexterity, Hand Management, Modular Board
Weight: Light
MSRP: $30-35

Monstrous allows you to play as a Greek god, unleashing a horde of mythical creatures down on the citizens below. By casting your cards onto the game boards, your creatures can attack a city or other creatures to score faith points. The game is simple to understand but offers enough depth to entertain and provide a solid strategic challenge. Even those unfamiliar with dexterity games will get a lot of enjoyment out of this little gem.