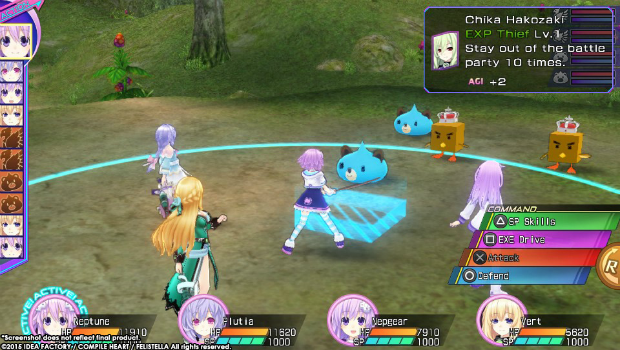 Games are supposed to be fun.  It’s in the name of the action: gaming, to not work, to not be idle, and to not be bogged down by the mundane and the unexciting.  While more banal activities can be excused, a game that provides such poor outcomes on one’s personal entertainment can be a downright fury-inducing episode.  If that game is also a painfully self-referencing romp, hellbent on pointing out it’s own flaws and the flaws of the industry as it floats from pedantic quest to pedantic quest, the fury can burn upwards to a great endearing rage.  When a game series burns you twice in a row in this fashion, it becomes clear that gaming itself has betrayed you, and all that is joy is dead.  Let us look upon the burning effigy of RPG gaming with this review of Hyperdimension Neptunia Re;Birth 3: V Generation.

Hyperbole aside, V Generation is a snapshot of everything that is wrong with RPG gaming in today’s age.  On one hand, that is a good thing, due to the game series’ ongoing theme of inside joking and self-aware storytelling.  On the other, it’s a bad thing, due to the fact that many of the problems the game jokes about reflect on the game itself.   While at first the overarching theme of a game within a game are quirky and fun, it quickly becomes old after the first few wisecracks.  The way this concept affects the game world is much more interesting, with items and powerups taking the form of computer memory units or other gaming related paraphernalia, the world’s protectors and regulators being known as “CPUs,” and the main cities all being plays on the major gaming consoles of the real world.

V Generation is playable, without any broken mechanics.  The game works on an overworld map system, so all towns are simply menus, and each location is just a blip to be scrolled through.  Dungeons are navigated actively, and works with the basic “run into an enemy, start a battle” design.  Battles are done in a semi-action based style, with a small arena and spatial attacking taking place in a turn-based battle order.  It is all very basic, so RPG gamers will be able to pick it up immediately and go, and first timers could easily learn and master it in a few hours.  No changes at all have been made since the last game, right down to the look and feel.  This wouldn’t be so bad if the last game was any good, but it was a mostly bland smear of button mashing hitting X while on the dungeon map.  The only difference with V Generation is the removal of a hidden treasure tracker that the player used by hitting a button on the dungeon map while navigating.  While not a flashy feature, it made the otherwise empty void of the game’s dungeons somewhat active, and without it, V Generation sees a net loss in playability.

Beyond just being bland and the lazy, V Generation kicks up the levels on both with the endless dialogue and cut-scenery.  V Generation uses a familiar 2D cutscene style, with voice acting combined with static characters and text at the bottom of the screen.  It has never been a good formula and bogs down the game.  V Generation is very likely the worst culprit in their catalog.  The game’s cities are not actually interactive, but are just menus where you accept jobs and use the shop.  Not only does the game lack that actual fun aspect of RPG towns, it includes the traditionally useless practice of talking to townspeople, in the form of a menu with a list of talking options.  One of the first such messages reads something to the effect of, “Can you read all of the messages in the game?”, a grim challenge that shakes the very visage of boredom and disappointment in your slack-jawed, soul sucked face.

V Generation takes special care to mock you throughout the game.  Every time that the game would drag, the characters would crack wise about a game dragging and how terrible that is.  The entire opening sequence lets you play the game for about 5 seconds, and then puts you through this terrible cutscene where the game’s main characters talk about how excited they are to play a new game, only to be limited to a few seconds of gameplay before the fun is interrupted.  While most of the dialogue falls somewhere between acceptable and useless, there is a particularly tasteless joke about citizens of the in-game world “Gameindustri” throwing themselves off of factory roofs to their deaths, reflecting the real life tragedy of factory worker suicides in China.  It’s a real shame, and the second and most fatal drop off in quality for the latest installment in this series.

The Hyperdimension Neptunia Re;Birth series has always been a potential-filled experience that ultimately disappoints, but the 3rd installment in the series passes right over the endearing and interesting elements of the game’s cut and paste formula for the most boring.

Patrick Rost has been with Gaming Trend since 2013. At first focused on sports coverage, Patrick has gone on to cover a wide range of games and other products for the website. Outside of Gaming Trend, Patrick writes and records music, grinds perpetually in Elder Scrolls Online (PS4), and lives day to day with his two dogs, Bob and Stella.
Related Articles: Hyperdimension Neptunia Re;Birth3: V Generation
Share
Tweet
Share
Submit