Island Sequence 24 is ending and the Syndicate Council has been murdered. Having been in exile for the past three million days, Lady Love Dies must discover the facts behind the murder, and determine her truth. Find evidence, interrogate suspects, and start the trial whenever you’re ready. It’s an open ended murder mystery, where the facts and the truth are often different things.

Paradise Killer begins with Lady Love Dies being brought out of her exile, for being deceived by the god Damned Harmony, by Judge to investigate the Council’s locked room murder. Just before the Syndicate moves on to the next Island Sequence, Perfect 25, to hopefully continue their mission of ritual slavery and sacrifice of innocent people to revive their gods, the process was interrupted with the deaths of all eight council members. No one can confirm this, as no one knows how to get past their four holy seals, so how could anyone get there anyway? After the situation is explained to you, you’re essentially set free to investigate this vaporwave inspired island how you see fit and begin the trial with as much or as little evidence as you wish. You do this by exploring from a first person perspective, asking suspects questions and presenting evidence, examining locations and objects, and using your computer Starlight to hack Nightmare Computers. It may sound fairly standard for a murder mystery game (apart from the bonkers interesting world and premise), but Island Sequence 24 is huge with secrets hidden everywhere. 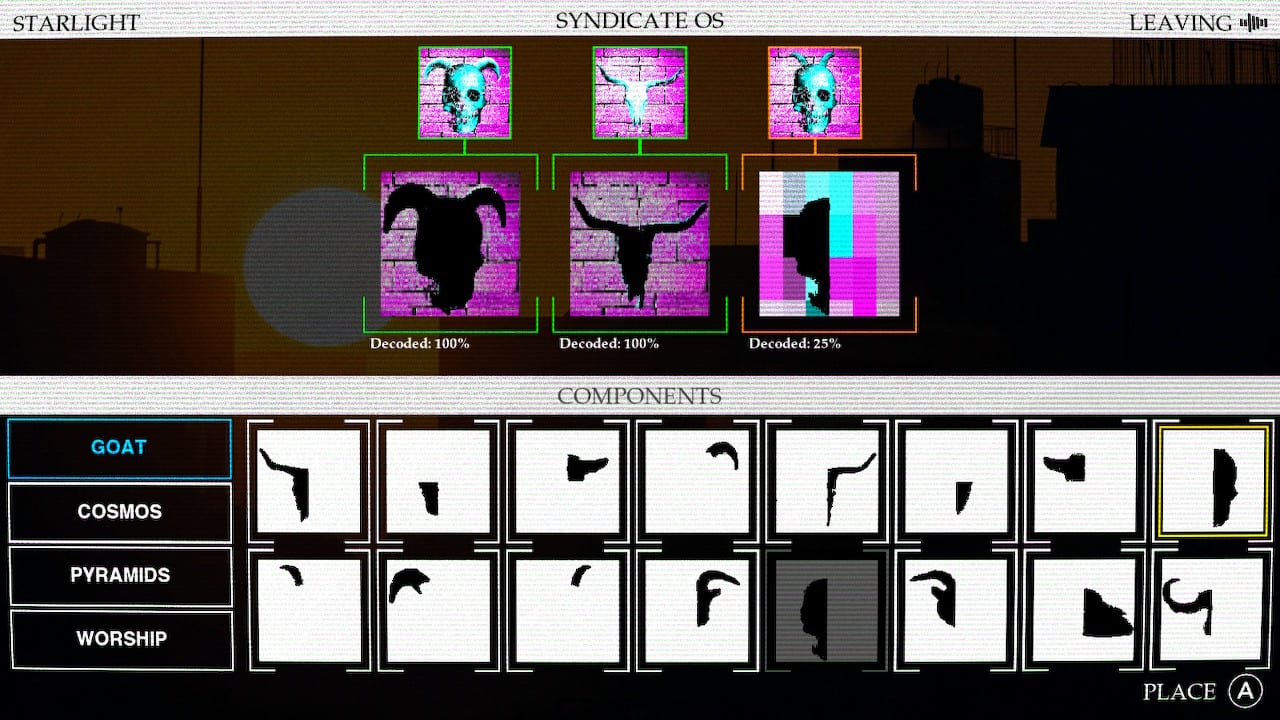 Exploring and looking for evidence is what you’ll spend the majority of your time doing, and while the island is a very cool and visually interesting place it can be very difficult to navigate due to its verticality and lack of a useful map. For example, after interviewing Sam Day Break you may want to jump off the cliff his bar is situated on to find a piece of evidence. This clue just so happens to lead back to Sam, so how the heck do you get back up? The map only shows a general idea of where everything is, and it’s occasionally inaccurate. Fast travel helps, but that requires the collectable Blood Crystals to both unlock a point and subsequently travel. Navigating becomes easier as you grow more familiar with the island, but it’s never as easy as it should be. As you explore, you’ll also come across several Nightmare Computers you need to hack into by solving a very simple puzzle of matching an above image using symbols. These are never difficult, and the only way these block you is by not having the correct type of symbols for a puzzle. While these are nice additions, it’s frustrating that you have to solve the same images repeatedly and the mechanic overall feels half baked.

Suspects are always in the same place, so you can go question them or hang out to increase your relationship at any time. The character designs and dialogue are unique and interestingly written, like the religious zealot Witness To The End or the information broker blessed by the gods with the head of a goat Crimson Acid. Don’t implicitly trust them because of their cool names though, they’ll all lie to you constantly. While it’s easy to want to implicate assholes like Architect Carmelita Silence or Yuri Knight, it’s impossible to tell who’s guilty without all the evidence. Paradise Killer is very open ended and you can implicate whoever you think did the dirty deed(s) during the trial, but there is a singular series of events to piece together. It’s incredibly satisfying to figure out what happened by yourself and to see LD do the same in the trial. Even after solving the mystery, I felt uneasy about the conclusion I reached and considered altering the facts to reach the truth I wanted. I’m fairly certain I found every piece of evidence and testimony though, so in the end I decided to stay as accurate as possible in my accusations. The ending after the trial, however, feels a bit unsatisfying. After executing those deemed guilty, you’re left to speak with the innocent, determine their fates, and move on to Perfect 25. Throughout the game, you can choose dialogue options exploring the moral bankruptcy of the Syndicate, and decide if Love Dies wants to reform them, continue siding with them, or dismantle it entirely. This idea isn’t any further explored beyond lightly touching on it, and it’s implied that this might be a major focus of the teased sequel. While I definitely want to play said sequel if it ever happens, I think the narrative would have been just a bit better without these loose threads. 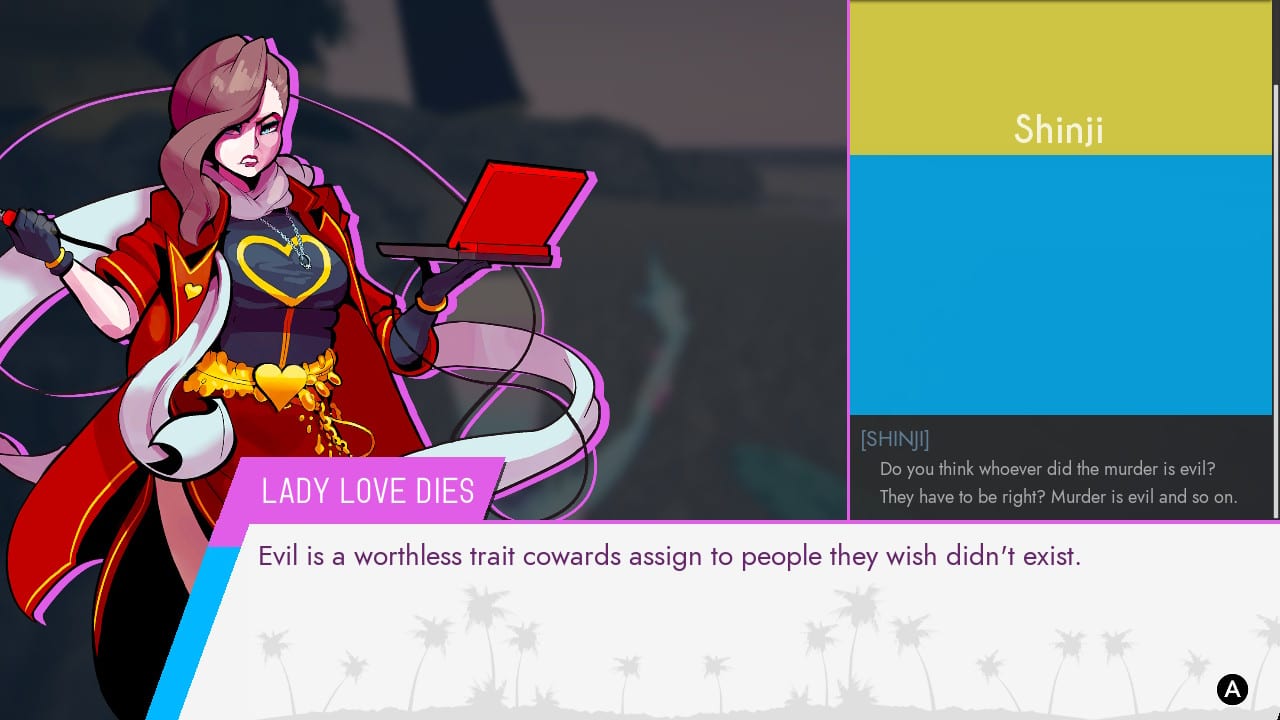 Finally, the biggest problem I have with Paradise Killer isn’t actually part of the gameplay or story, but the experience of actually playing it. Despite the amazing wealth of accessibility options available, there is no way to turn off the motion blur. I got used to it after a nauseating first few hours, but this is a large barrier for a lot of people and overall just makes playing the game less enjoyable. Otherwise the game plays very well on Switch. With a vaporwave aesthetic, PK isn’t afraid to hide its imperfections like draw distance- it fully embraces them and is better for it.

Paradise Killer is a fascinating murder mystery set in a strange world with even stranger characters. The game lets you put the evidence together to find out what really happened in a way most don’t. With its unique aesthetic and bumpin’ soundtrack, it’s well worth letting love die to find the facts.

David is the kind of person to wear his heart on his sleeve. He can find positives in anything, like this is a person who loved Star Fox Zero to death. You’ll see him playing all kinds of games: AAAs, Indies, game jam games, games of all genres, and writing about them! Here. On this website. When not writing or playing games, you can find David making music, games, or enjoying a good book. David’s favorite games include NieR: Automata, Mother 3, and Gravity Rush.
Related Articles: Indies, Paradise Killer
Share
Tweet
Share
Submit