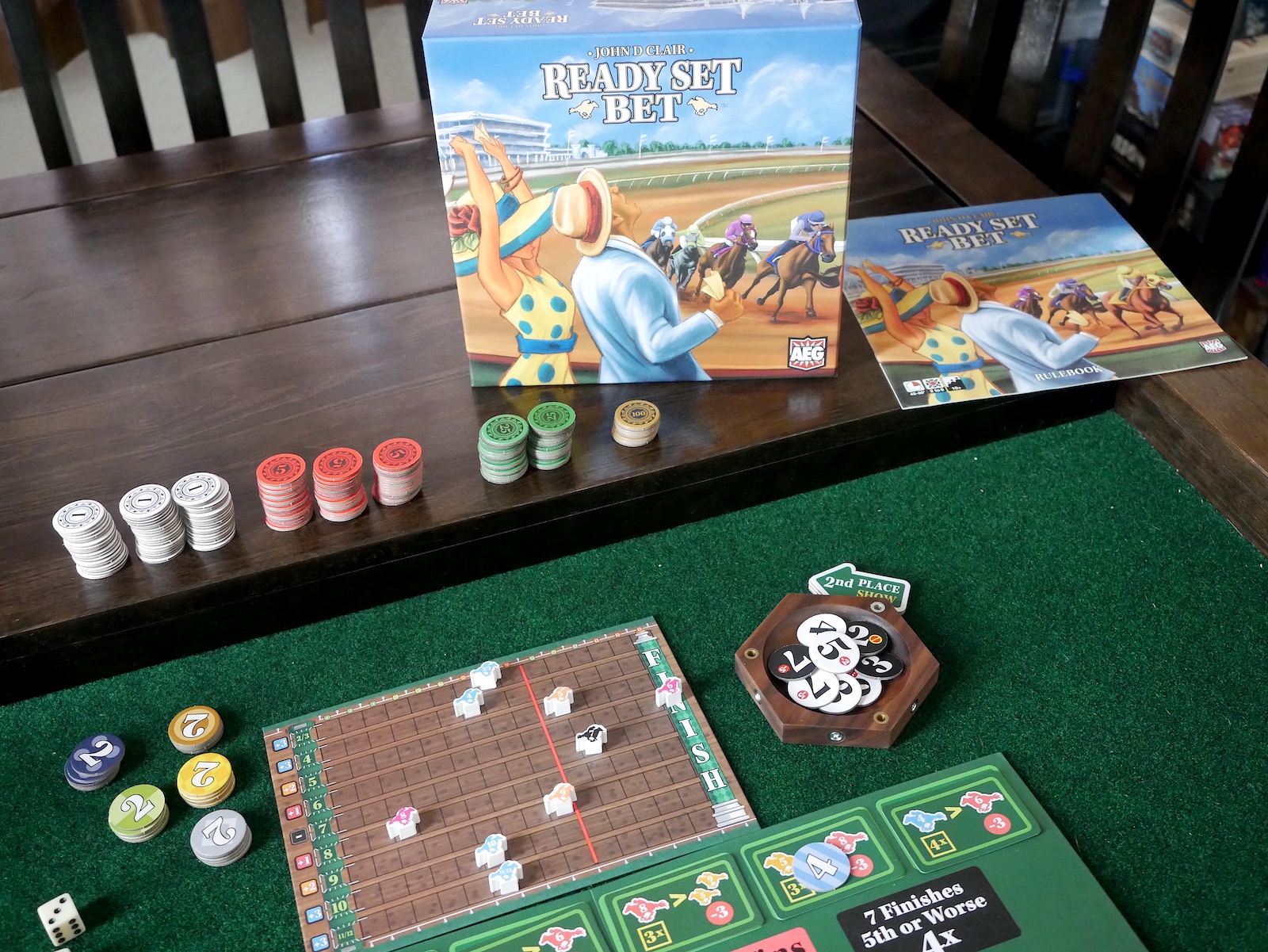 While I’ve never been to a horse race and I never will, I’ve always enjoyed horse racing and betting games.  However, they almost always feel like something else with a horse racing theme and don’t really capture the betting feeling.  Usually there is too much player manipulation of the horses that pulls the game away from betting and puts more on getting your horse to win.  One of my favorites is Long Shot: The Dice Game.  It has a lot of focus on betting and a great horse movement system, but there is still a little bit of horse manipulation going on. 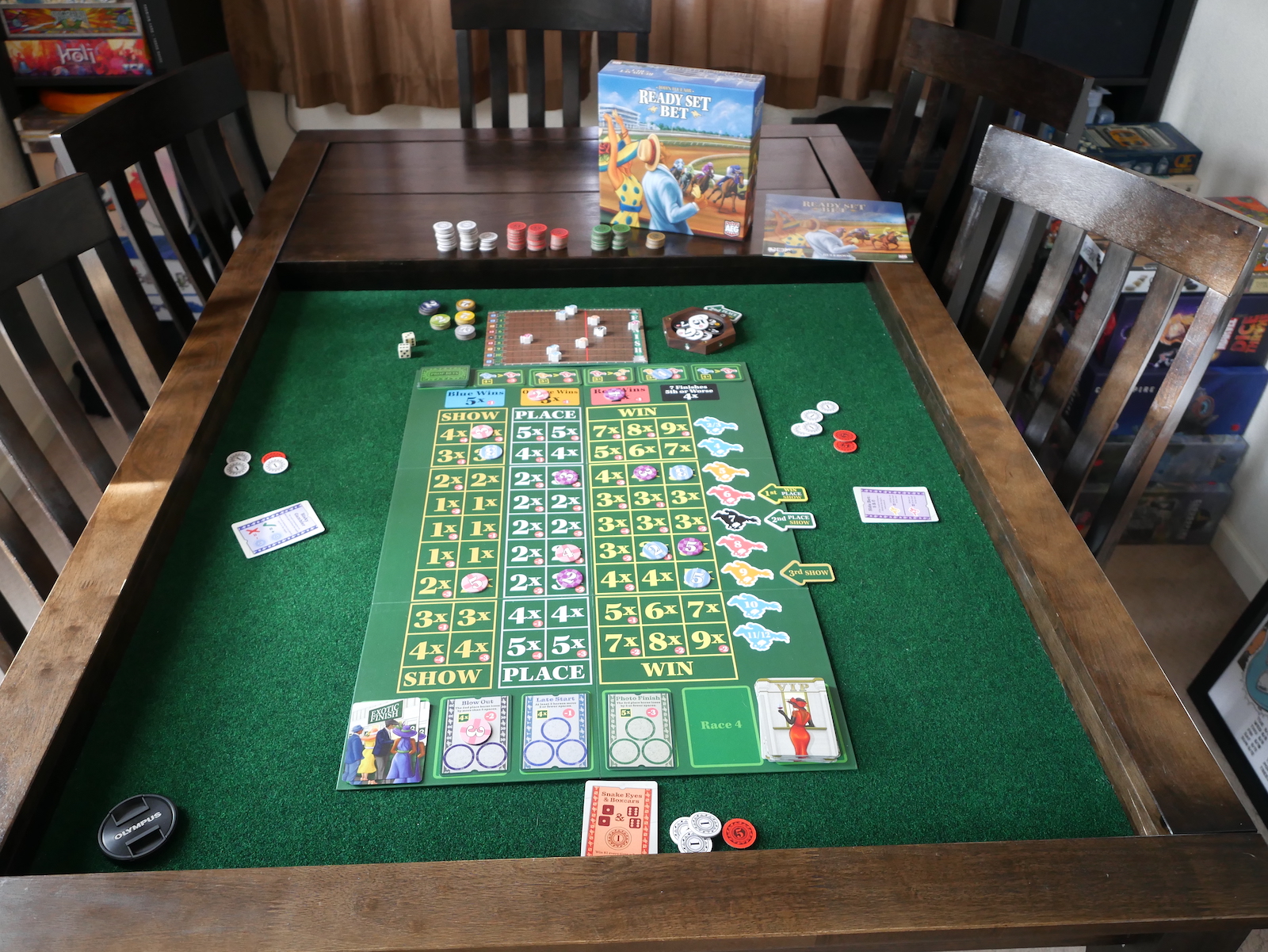 Enter: Ready Set Bet!  This game is pure, undiluted horse race betting.  There is absolutely no horse manipulation.  You know the odds at the beginning and all you’re doing is competing against everyone else to make the best bets and earn the most money over four races.

A single race in Ready Set Bet is done in real time.  At the beginning of the game everyone has an equal number of betting chips and you get them all back at the end of each race.  On the board there are locations to place your chips in order to bet on a horse winning, placing, or showing (getting first, second, or third).  There are bets for having a specific color of horse win.  There are also random prop bets dealt each race that let you bet on one horse doing better than another horse or group of horses.  There are exotic finish cards that let you bet on specific race ending situations, a new one being added each race.  And finally, there is a place to bet on the “7 horse” doing poorly.  The “7 horse” being the favorite to win any given race. 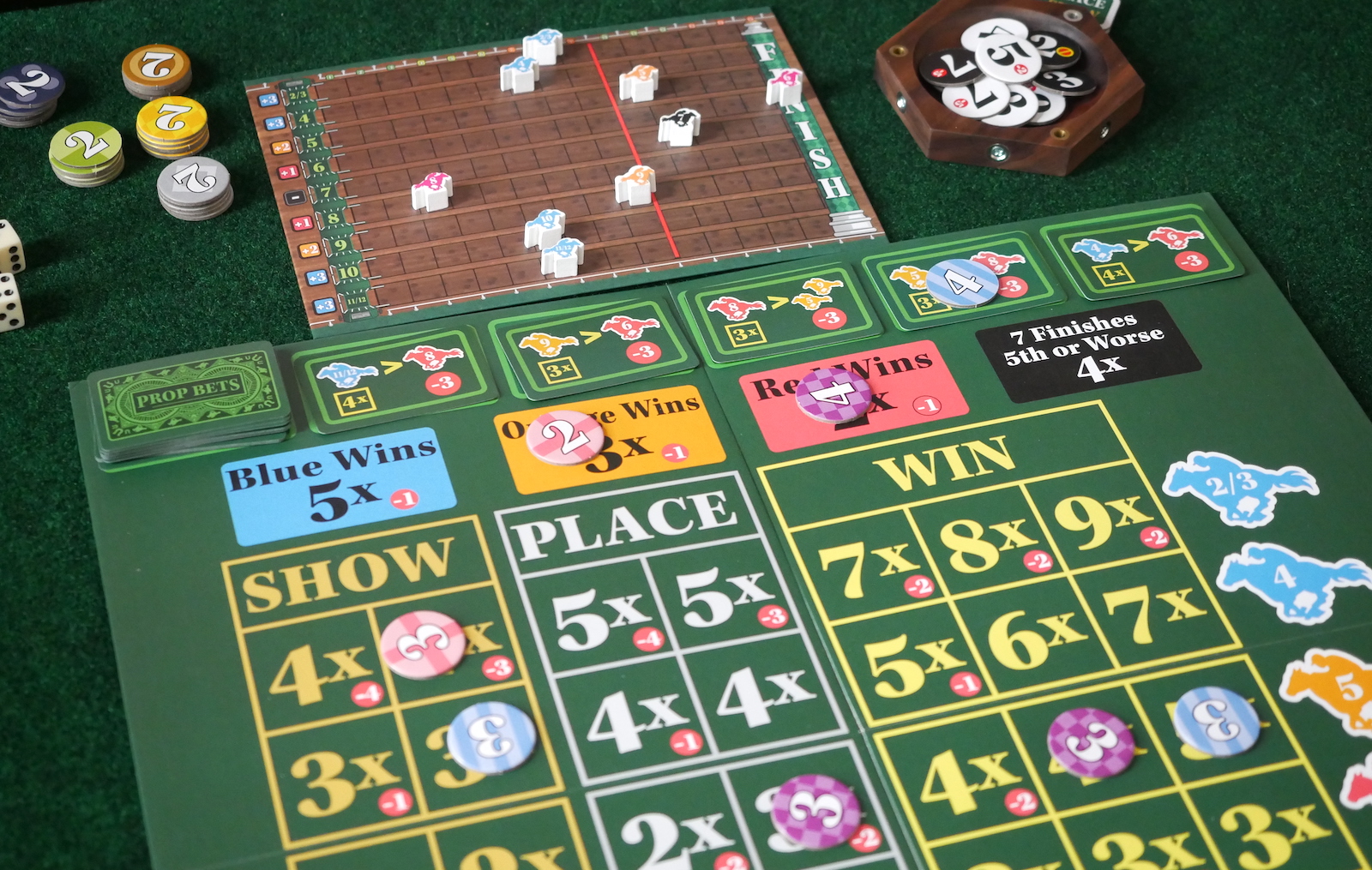 The catch for betting is that each space can only have a single token!  If someone else places their token where you want to place yours, that’s too bad.  You’ll have to go somewhere else.  There are three spaces for each horse to win and two for each horse to place or show, but the odds of each space aren’t always the same.  Waiting to bet isn’t always a bad thing though because in Ready Set Bet you get to watch the race get started and don’t have to place your bets until you’ve seen the horses leave the gate and know which ones are doing well.  A shrewd player should be able to pick the best places to place their bets for the maximum chance of winning, as long as they’re not too slow…

The mechanic for how the horses move is quite clever.  A pair of six sided dice are rolled and the corresponding horse moves forward one space on the track.  There is a horse for each number between 5 and 10.  There is also a ⅔ horse and an 11/12 horse which will move if either of their numbers is rolled.  These dice are rolled continuously in real time for the players to watch while making their bets. 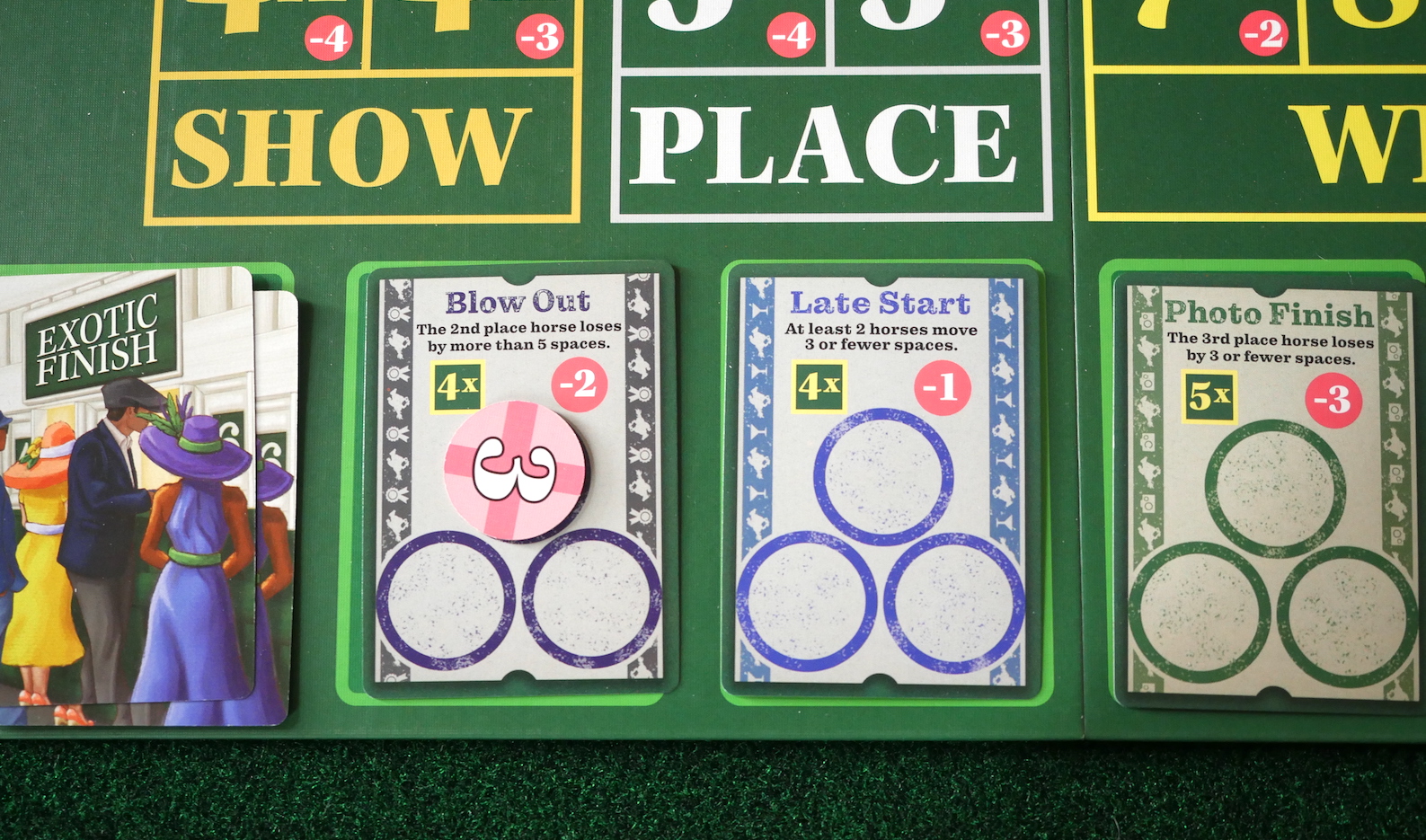 Using basic odds the 7 horse is most likely to be rolled and thus most likely to win the race.  However, every other horse has the possibility of gaining bonus moves.  If a non-seven is rolled twice in a row, that horse gets a bonus move in addition to its normal move.  The lower the odds of a horse moving the bigger its bonus move is.  For example, the bonus value for the 4 horse is +3.  So, if a 4 is rolled twice in a row then that horse has suddenly just jumped forward 5 spaces!  This can make for very exciting situation changes with some great opportunities for come-from-behind wins.

You can’t wait forever to place your bets, though.  As mentioned before, all the good spaces might be taken if you wait too long.  In addition, there is a red line two thirds of the way down the track.  As soon as three horses have passed that line there are absolutely no more bets.  Everyone just watches how the race finishes while cheering on their favored horses. 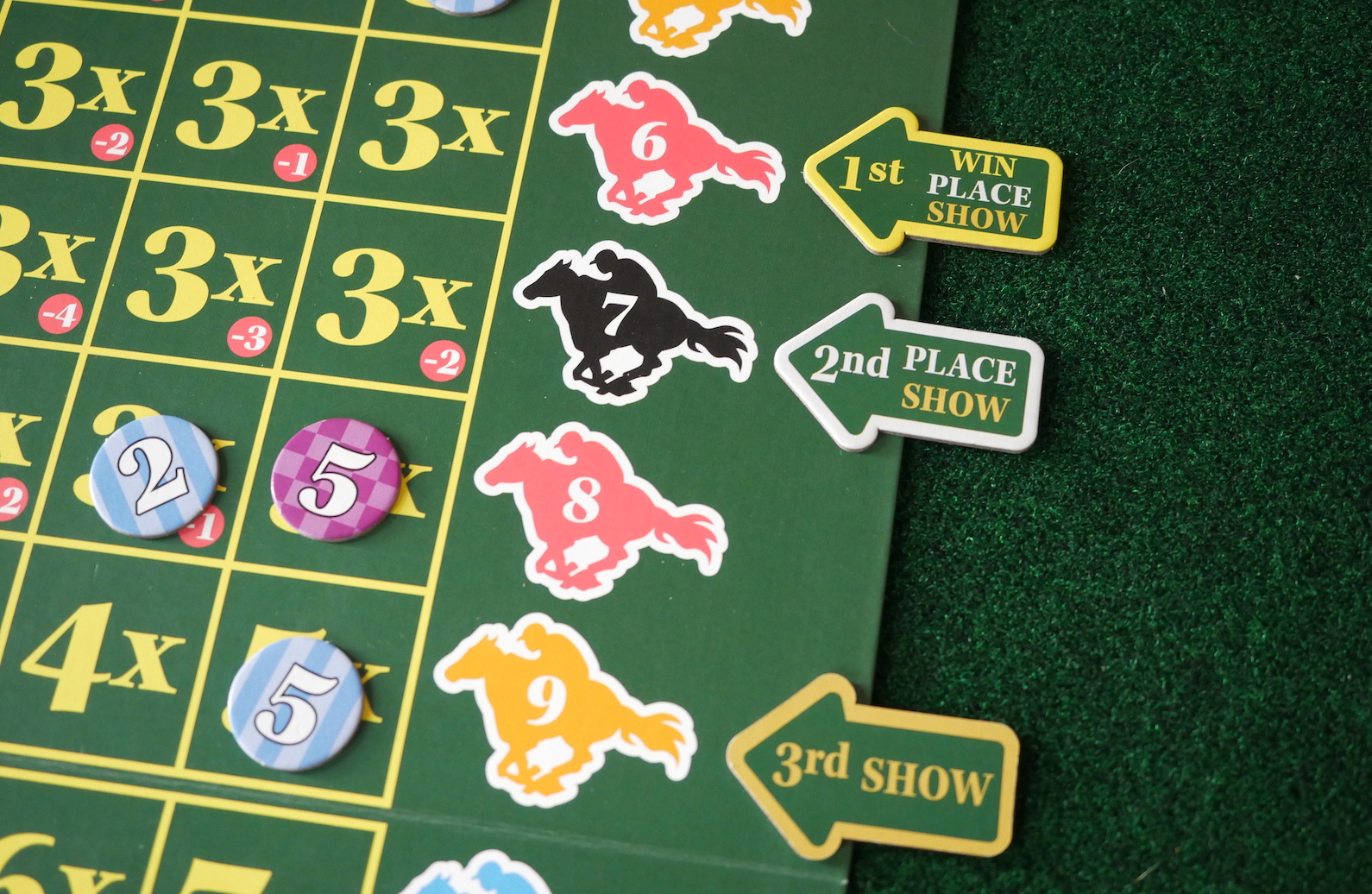 Once a horse reaches the finish line the race is over and everyone gets paid out.  All players gain money for their winning bets equal to the number of their chip (ranging between 2 and 5) times the multiplier of the space their chip is on (ranging between x1 for pretty safe bets and x9 for risky bets).  After everyone has collected their winning bets they then retrieve their losing tokens and have to pay any penalty that might be showing in a red circle on the space.

To mix things up between races each player is dealt two VIP cards and gets to pick one to keep and play.  Half of these provide extra betting tokens, sometimes with extra penalties if they become a losing bet.  The rest are things like having side bets, getting to piggyback a bet, getting extra money for every 2 or 12 rolled, or just flat cash.  Just things to mix it up between the players but still nothing that lets them manipulate the race. 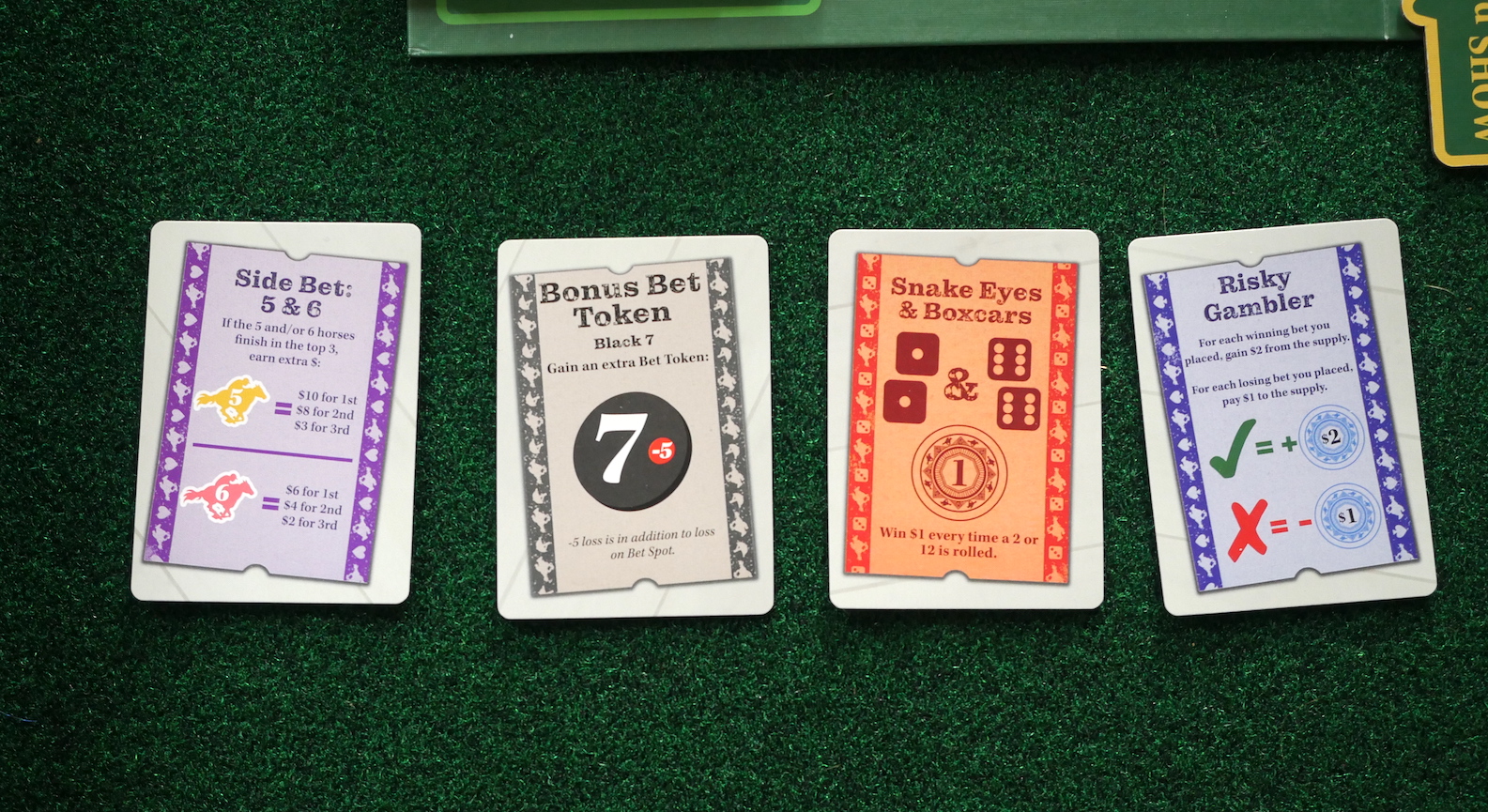 After that you deal new prop bets and a new exotic finish and reset the horses to begin the next race!  After four races the player with the most money wins.

The game can be run using one of two methods.  The first is that one person can act as the house.  They don’t play the game.  Instead their job is to roll the dice and move the horses at a steady and rapid pace while doing their best to impersonate a horse race announcer.  The second method is to use the excellent official Ready Set Bet app.  It has a mode to randomize the dice rolls while doing some dynamic announcing.  It also has around 20 prerecorded races.  While these are not randomized, and thus can only be used once each, they have some really great announcing to give that authentic horse race feel.

The first couple of times I pulled out the game the app hadn’t been released yet, so I acted as the house and had a blast.  While my announcing was surely mediocre at best, I remember thinking that I’m not sure I’d really have any more fun actually playing the game.  The game does include a variant where the house can put down some betting tokens at the start of each race to be able to “participate” but these seemed pointless to me as you don’t get to see how any of the horses are doing first, making them completely random bets. 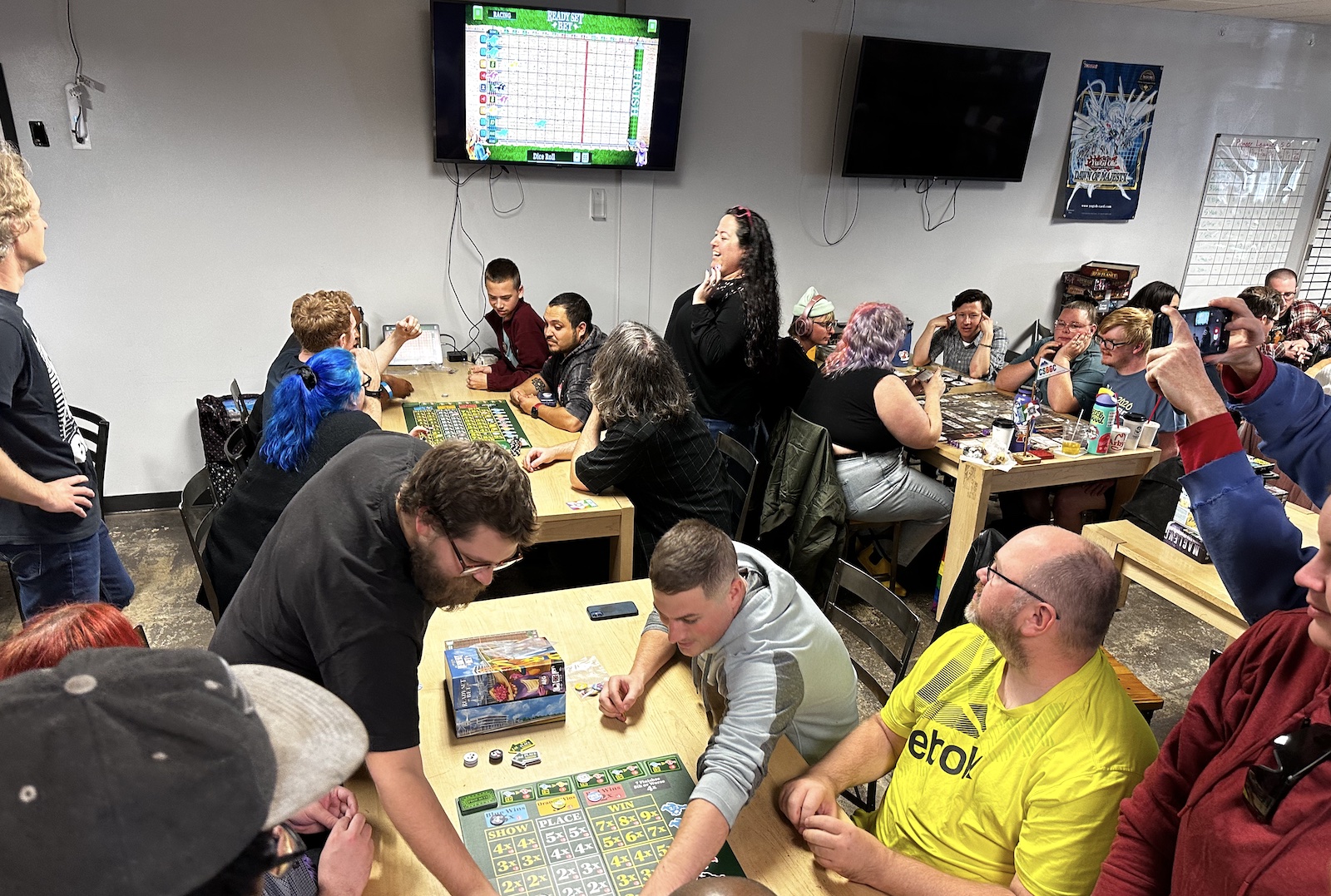 Once the app was released we started using it exclusively and I think it was a great improvement over what I could provide.  We’ve played the game with as few as 4 all the way up to the maximum player count of 8.  However, we also held a fundraising tournament using two copies of the game with a single app streamed to a large TV on the wall and it was awesome!  Having that many people all cheering and yelling at the TV as horses fall behind or zoom ahead is quite the experience you don’t get very often in the board gaming world.

So, now for my main critique which I alluded to in the title of this article.  How much of a game is actually here?  I’ve seen players with all sorts of strategies.  Some wait until the very last second to make their bets, sometimes losing the opportunity when a third horse shoots across the red line.  Some players slam their bets down on their favorite horses as soon as the bell rings.  My personal strategy is to wait until a horse gets a little bit of a lead and then put a bet on it for placing.  Somewhere in between safe and risky.  I’m pretty good at strategy games in general.  I’ve never won a game of Ready Set Bet.  There’s always a chance for completely random things to happen.  A horse one space away from the finish leagues ahead of everyone else can just sit there as someone else crawls up and finishes before them.  A player that has made almost nothing the first three races can make a killing on their last race outside bets. 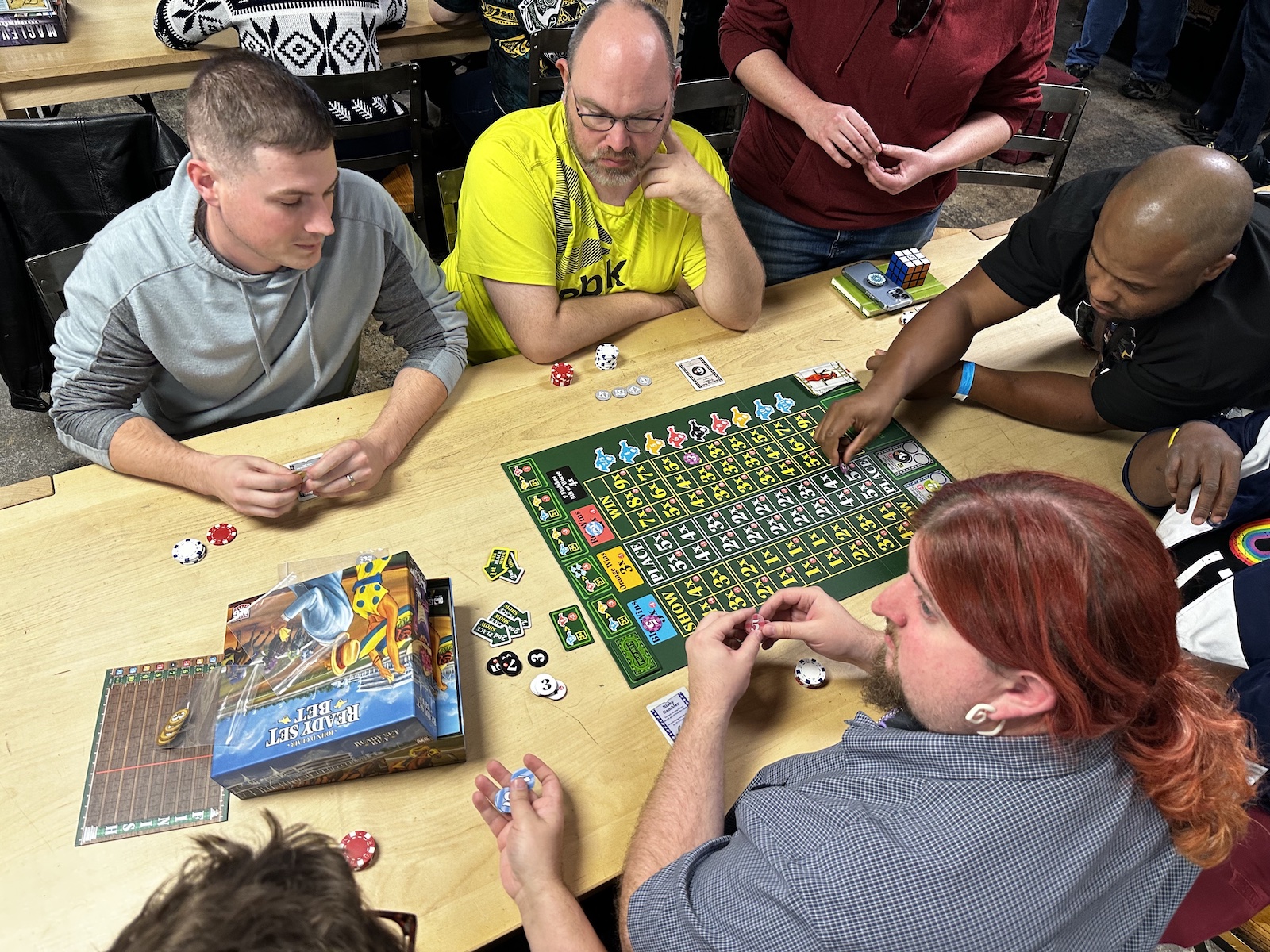 If you want to be able to win every game you play because you were the smartest and made the best moves, well, you’re not really going to get that here.  And I’ve definitely noticed a divide in all the people I’ve played the game with.  Some, like me, think it is an awesome experience.  The highs when you get big payouts and seeing someone else shaking their head as all their bets fall apart is all part of that.  And then a lot of players never want to play it again.  To them it is boring.  They’re at game night to play games, and this is sort of more of just an activity that you kinda get to interact with.  And while I think it is a great activity, there are many people that will not.

Ready Set Bet is almost better described as an experience than strictly a game, and does an incredible job of simulating the real horse betting experience. Some players may be turned off by the lack of strategy and agency, but those who do get into it will thrill to the real-time aspect of watching their favored horse race to the finish line.