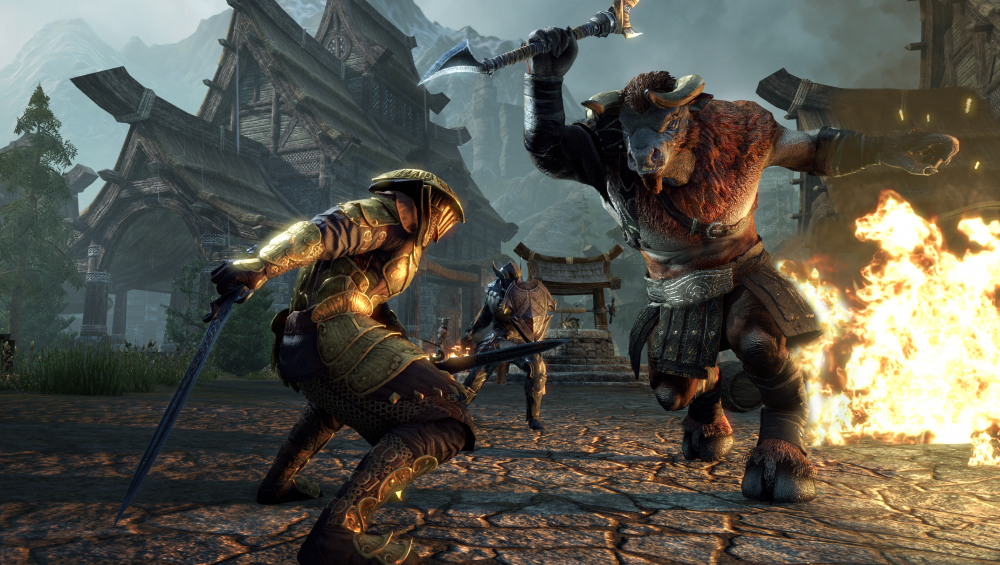 Big and small, the additions to The Elder Scrolls Online have always come with a sense of newness and expanded the world in lore, location, and loot. The Horns of the Reach provides a lot of fun new content, but it doesn’t do much to expand the universe of Elder Scrolls Online. While failing in that regard, much of the content for this small DLC release is top-notch fun and provides a nice bump of excitement.

This release is only a minor content dump, with two 4-player dungeons, maps for a 3x3x3 Battlegrounds mode, and a new game called “Chaosball” . Chaosball has a “dogpile the guy with the football” feel and is outstanding in what is a surprisingly fun and functional part of ESO.

The Battlegrounds mode balances players by taking away the Champion system, removing several buffs that are stronger for higher-level characters. This allows the match to be determined by skill and character build over level, and that seems to come out most in Chaosball. If you can’t run, fight, and escape, you’ll be overrun before you can blink. Keep moving and you’ll be golden.

Unlike the previously released Domination mode, a “Capture the Flag” clone, there is actual player movement that makes Chaosball a much more, ahem, chaotic mode. While there is a tendency for some teams to focus only on disruption, which can lead to some inability to focus on the actual target, when all players are focused on the goal and killing each other with a central goal in mind, the game plays fast with lots of movement and quick changes.

The dungeon additions are not bringing much of anything new in terms of the way the game plays, but both dungeons do boast some interesting new boss fights. However, there is never any challenge, and I think it is just another bad example of ESO being tepid and more a grinding simulator than a true challenge. Enemies are numerous, but easily defeated, and the bosses only serve up a real challenge if a teammate doesn’t know what he is doing and sabotages the mission. At this point, instead of these large dungeons, I’d be just happier if they put all the enemies in one room and made them come fight me one-by-one. At the very least, it would save some wear and tear on my analog stick thumb.

The Falkreath Hold is the best of the two new dungeons, simulating a raid on a city that you’re coming in to stop. An incredibly powerful trio of Daedra and their overlord are wrecking the village and you and your companions are Falkreath’s only hope for survival. The battle is visually stimulating, and there are elements in the boss battles that emphasize that war setting.

The second dungeon, Bloodroot Forge, is much more of what you’ve come to expect from the dungeons in ESO. There are enemies and lots of lava everywhere, and something sinister is happening and you’re the team to stop it. There is a focus on minotaurs as enemies in this dungeon, and they have a ass-shattering set of moves that will frustrate you. Fun, quick, but unspectacular, Bloodroot Forge is one to do once and then maybe move on for good.

Overall, this release feels like a little nod to fans of Oblivion and Skyrim, after the large release of Elder Scrolls Online: Morrowind recently. A new map for the Battlegrounds mode is set in the Arcane University, and it has the look and feel of the original; more prominently, the Falkreath hold has the exact look and feel of Skyrim’s lush green landscapes and Nord architecture, and it will take you back instantly. If for nothing else, another little handshake with the Elder Scrolls’ very appreciated past is not a bad thing.

The release is also providing some tweaks to the gameplay and presentation for all players. This makes differentiating between enemies and friends easier, and it also boasts some very appreciated visual tweaks to spells that make it easier to understand their range.

The Horns of the Reach DLC for Elder Scrolls Online is small, but it gives some decent gameplay and a new set of items, objectives, and a few other scarce elements that will help players at any stage of gameplay. Many players will get this full release automatically as part of their ongoing subscription to the game, but casual players of the game may want to wait and see before jumping in.

Patrick Rost has been with Gaming Trend since 2013. At first focused on sports coverage, Patrick has gone on to cover a wide range of games and other products for the website. Outside of Gaming Trend, Patrick writes and records music, grinds perpetually in Elder Scrolls Online (PS4), and lives day to day with his two dogs, Bob and Stella.
Related Articles: Elder Scrolls Online: Horns of the Reach
Share
Tweet
Share
Submit